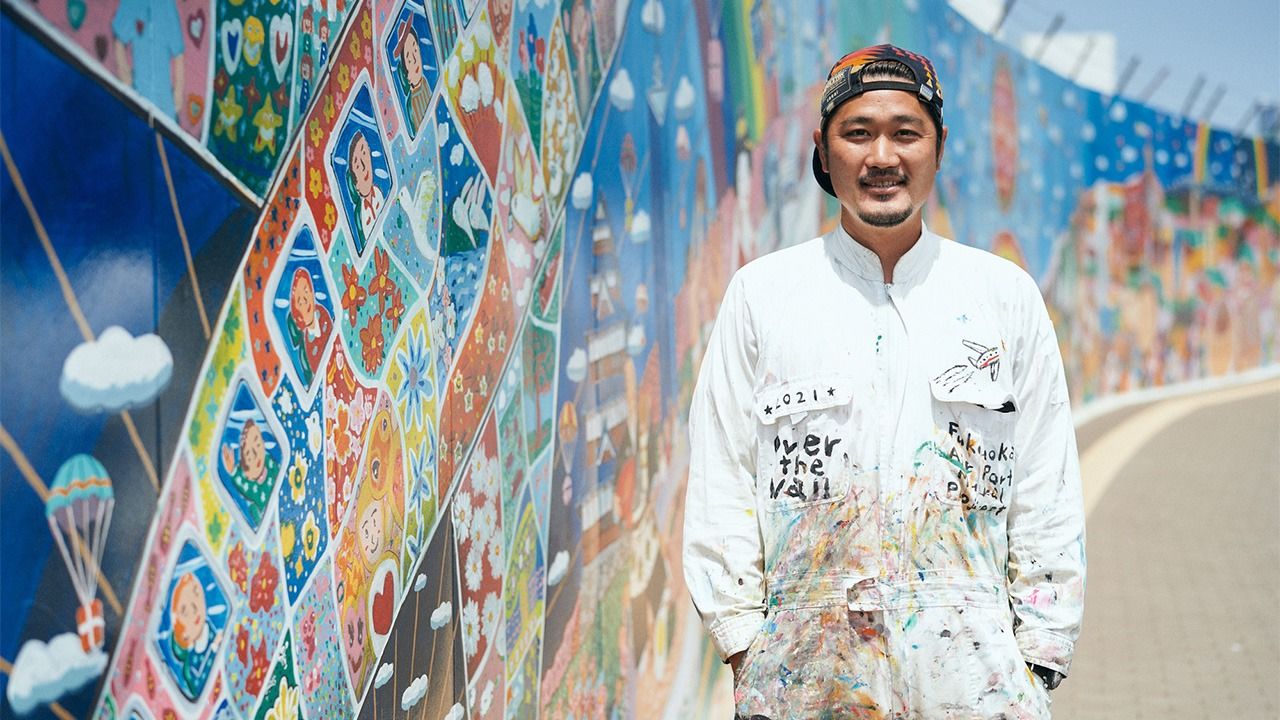 Culture Art People Jul 20, 2022
Miyazaki Kensuke is a visual artist who turns walls in underprivileged and war-torn locations around the world into a collaborative canvas for inspirational murals. Writer Masuda Masafumi spoke to Miyazaki about his work with communities in Ukraine, and how the ongoing conflict has influenced his artistic vision. 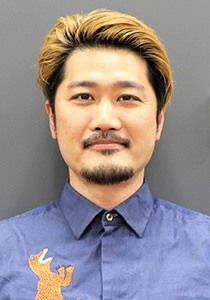 Visual artist. Born in Saga Prefecture in 1978. After obtaining a master’s degree in art and design from the University of Tsukuba, he relocated to London to pursue his career as an artist, devising the “Super Happy” concept, which aims to elicit instant feelings of happiness in those who view his works. His ongoing Over the Wall project, devoted to the creation of inspirational murals with communities around the world, has included urban slums in Kenya, a public hospital in East Timor, a UNHCR-sponsored visit to Ukraine, a women’s prison in Ecuador, and a collaboration in Haiti with humanitarian organization Médecins Sans Frontières.

Miyazaki Kensuke has spent years travelling the world’s impoverished, crisis-stricken, and war-torn regions to create murals in collaboration with local people. He has put his brush to walls in the Philippines, Kenya, East Timor, Ecuador, Haiti, and more, leaving behind colorful, humor-packed visual messages. 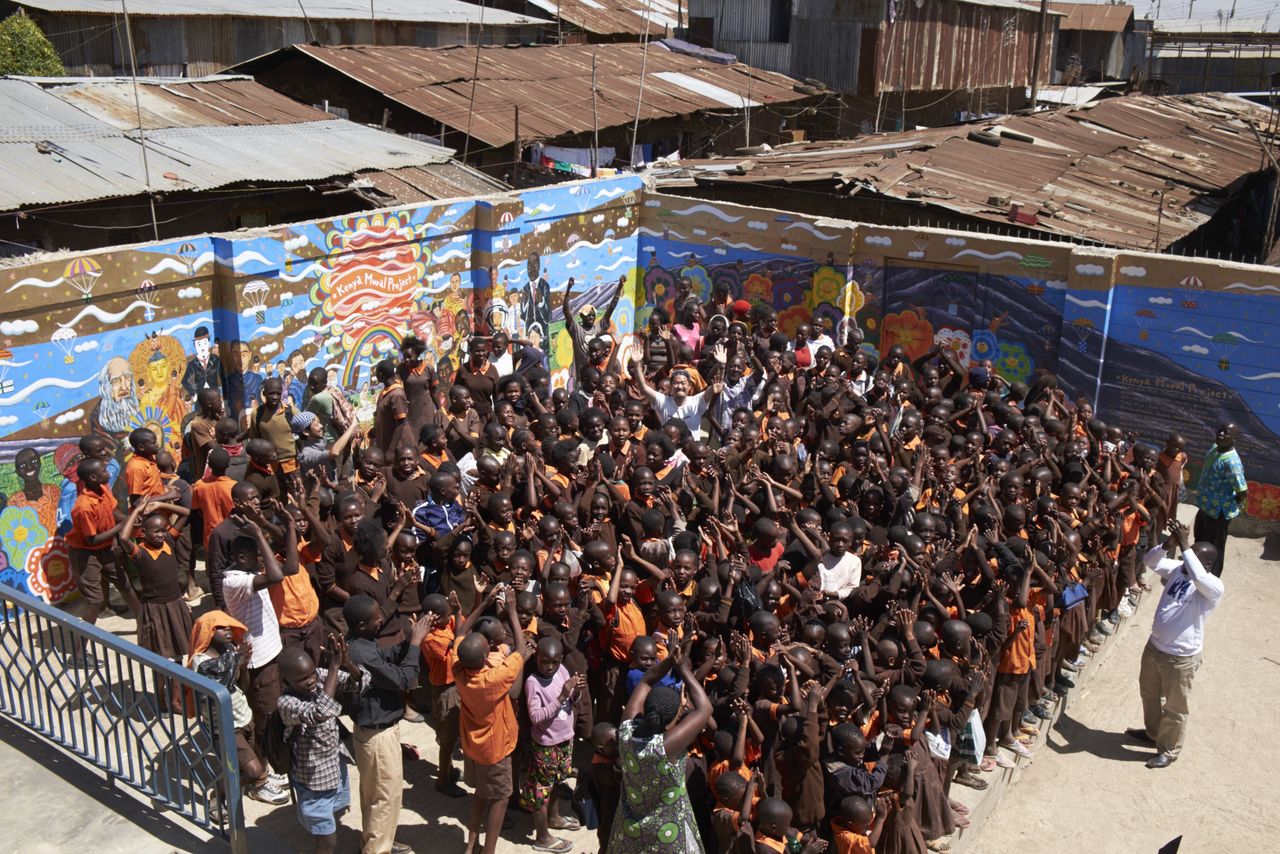 Kenya Mural Project (2015) created a mural at the Magoso Elementary School, located in a slum district of the Kenyan capital of Nairobi. (© Over the Wall) 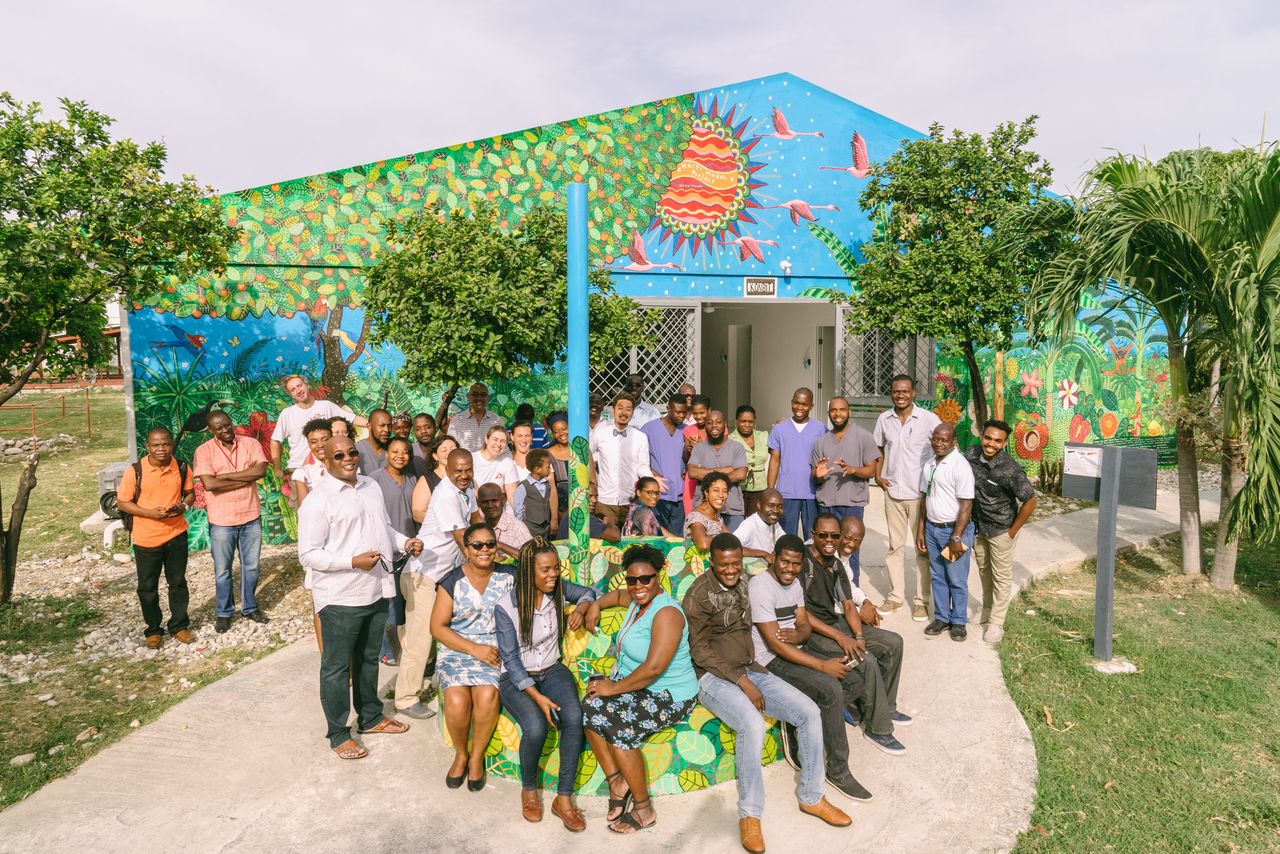 Haiti Mural Project (2019) visited a hospital in a deprived neighborhood of the Haitian capital Port-au-Prince, which suffered widespread damage in the 2010 Haiti earthquake. (© Over the Wall)

“The theme behind my murals is something I call ‘Super Happy,’” Miyazaki explains. “Even when faced with tremendous obstacles, like war or poverty, people devote themselves to just carrying on with their lives, and they take great pride in that. My aim is to support those people in achieving a sense of positivity and happiness as they tackle whatever ‘walls’ they may face in their own lives.”

Against that backdrop, he shows me a picture taken in the Ukrainian city of Mariupol, scene of some of the fiercest fighting with Russian forces during the ongoing invasion. “In early April, a mural we created in Mariupol was struck by artillery, leaving three gaping holes.”

The mural was created in 2017 at Mariupol’s No.68 School, a combined elementary and middle school in the now devastated city. The imposing 11-meter-by-11-meter artwork was painted on the side of a school building with the assistance of almost 200 pupils. “The mural was made in a spirit of peace and coexistence,” Miyazaki laments, “which makes this war all the more upsetting.” 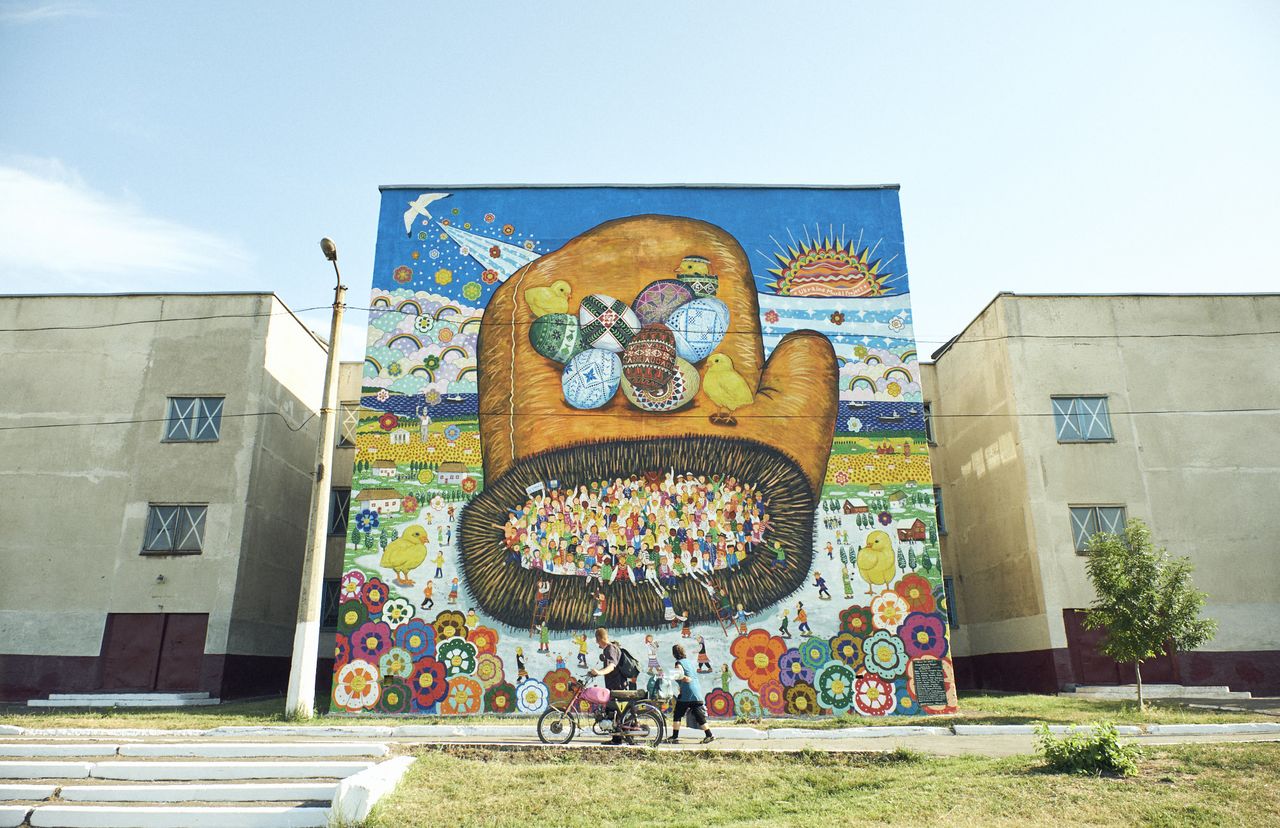 Ukraine Mural Project (2017) created a message of peace alongside pupils from Mariupol’s No. 68 School, using a wall of the facility still bearing bullet holes from the 2014 war in the Donbas region. (© Over the Wall)

As well as Mariupol, Miyazaki’s summer 2017 trip to Ukraine saw him visit the capital, Kyiv. “It started with an invitation from the UN High Commissioner for Refugees, after which we secured official cooperation from both the Ukrainian Embassy in Japan and the Japanese Embassy in Ukraine.

The UNHCR proposed that the mural should capture the theme of coexistence with refugees, while Ukrainian representatives were also eager to commemorate the twenty-fifth anniversary of the establishment of diplomatic relations with Japan. “Ukraine had a very progressive approach to accepting refugees and was home to people displaced from countries like Syria, Afghanistan, and the Democratic Republic of Congo,” remembers Miyazaki. “Diplomatic relations with Japan were also extremely strong, with sister city partnerships between Kyoto and Kyiv and Yokohama and Odessa.”

In fact, Miyazaki’s visit came in a year officially designated as the “Year of Japan in Ukraine,” with his murals just one of a range of Japanese-themed cultural activities that took place in the country throughout 2017. This vibrant relationship continued in the years that followed, with Japan exporting automobiles, machinery, and other technical apparatus to Ukraine, and commodities such as metal ore, agricultural produce, and timber travelling in the opposite direction.

But Miyazaki’s visit also provided grim indicators of the conflict to come. “Five years ago, Ukraine was basically in the midst of a civil war,” he remembers ruefully. “Russia’s annexation of Crimea in 2014 had sparked a protracted conflict in the Donbas region between Ukrainian government forces and pro-Russian separatists.”

Miyazaki says he was mentally prepared for the journey, but that the prospect of conflict impacted the seven-strong, mixed Japanese and South Korean team. “One member decided to back out. There were constant reminders from the UNHCR and the Japanese and Ukrainian governments that we were making the trip at our own risk, and that the situation could change unexpectedly at any moment.”

In July 2017, shortly after arriving in Kyiv, Miyazaki began work on a Mosaic at a cultural center in the capital, where he guided a group of some 50 refugee children—from places like Syria and Afghanistan as well as internally displaced Ukrainian minors—in the depiction of a world of people happily running together along a cherry blossom-lined road.

But Miyazaki’s expression stiffens as conversation turns to that trip’s next destination: “Kyiv was relatively tranquil, but Mariupol was a different story entirely.” 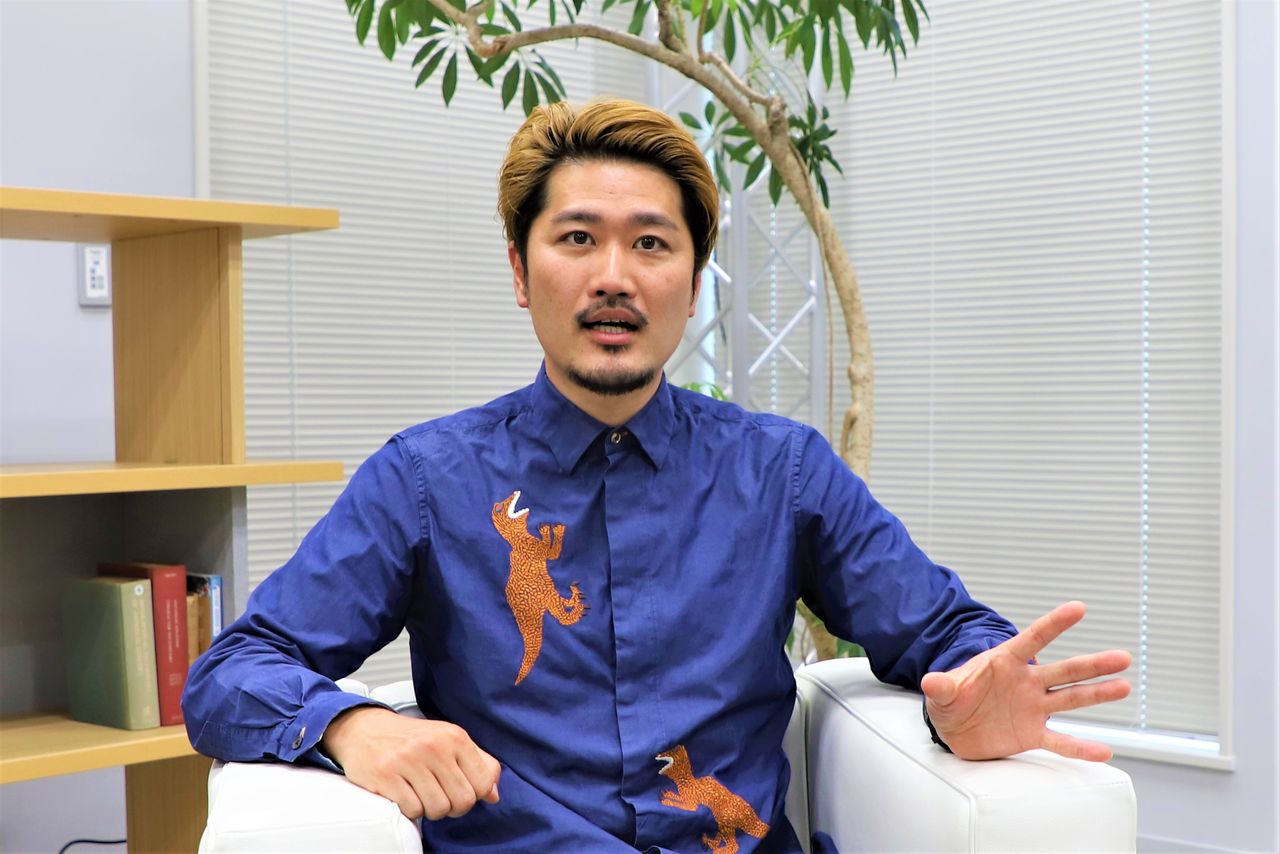 A Message of Peace for War-Torn Mariupol

The journey from Kyiv took 13-hours by train. “It was too dangerous to fly,” he explains. “July 17 was actually the anniversary of the 2014 downing of a Malaysia Airlines flight not far from Mariupol.”

Another difference was the weather. While the sun had smiled down throughout their time in Kyiv, Mariupol was cast under a dark pall of rain. “As soon as we got off the train, our noses were assailed by the smell of iron,” Miyazaki recalls. “It was coming from the Azovstal Iron and Steel Works, which has since become an emblem of Ukrainian resistance.”

Even in 2017, visiting Mariupol was a risky endeavor. “The No. 68 School , where we were going to paint our mural, is only a few kilometers from the Russian border. And with the region mired in civil war, people were tense. The apartment complex behind the school was in ruins, and even the police station was in a terrible state. I remember some locals telling us about being awoken by explosions from shelling in the middle of the night.”

Realizing it was no time to back out, Miyazaki steeled himself, deciding that Mariupol was the perfect context for the realization of his “Super Happy” concept. His planned mural was inspired by The Old Man’s Mitten, a picture book by Siberian-born illustrator Evgeny Rachev (1906–97).

This traditional folk tale tells of a mouse who takes shelter in an abandoned mitten it discovers in the forest. The mouse is soon joined by a parade of other creatures, including a frog and a rabbit. Despite the subsequent arrival of larger predators like a wolf and a bear, the animals all manage to get along in their shared, cramped environ. “I thought that the fairytale’s sense of community and coexistence was perfect for Mariupol, and for Ukraine as a whole,” Miyazaki explains.

Naturally, he also added his own unique twist to this theme. “The mural shows people of all different ethnicities living happily side by side. The sea represents the port city of Mariupol, and the seagull is another symbol of the town. The Easter eggs represent rebirth and the return of peace. They’re also a symbol of hope, and I’ve even heard that decorated easter eggs may have originated in Ukraine.”

Other characteristically Ukrainian motifs include sunflowers, a steelworker, and a theater. It is one of the largest murals Miyazaki has been involved with to date. “The sky and the seagull were four stories high, so local construction workers put up a scaffold and handled those parts for us with great enthusiasm,” he recalls. “The elementary school children took care of the flowers and so on nearer ground level.”

Before starting work on the mural proper, Miyazaki led workshops to get residents into the spirit of painting. “We always start with a draft to work from, but instead of adhering strictly to that, we focus on the input and creativity of participants. Kids really are a treasure trove of ideas, and that inspiration is often very stimulating for me, too.”

The mural itself took the group around three weeks to complete. Miyazaki and his team cooked for themselves at the apartments they stayed in near the school, but on a number of occasions residents invited them into their homes for dinner. “We had borsch and other authentic local dishes, all of which were delicious. As was the local beer!”

Praying for a Swift End to the Conflict

In spring 2022, the city of Mariupol was once again engulfed in conflict. “We’ve struggled to get in touch with friends from the mural project. The people we’ve been able to reach have had only the most agonizing stories to report. One couple we know managed to make it to the Polish border. The woman crossed over into safety, while the man took up arms and went back to fight for their country.”

“The theater we incorporated into the mural was based on the Academic Regional Drama Theater in nearby Donetsk,” he goes on, biting his lip in anguish. “When the invasion began, locals painted large messages in Russian on the theater grounds to indicate that there were children inside. But it still got bombed, and hundreds of people lost their lives.”

As an artist, Miyazaki has not given up hope that he might one day be able to return to Mariupol and restore the damaged mural: “I know I’ll make it back to Mariupol. And I hope that restoring the mural can help bring hope to local people once more.”

The military invasion of Ukraine has also forced Miyazaki to reassess the role of his murals. “Creating these murals is a task where you stand shoulder to shoulder with your comrades and paint while chatting happily among yourselves. That sense of working toward a shared goal is what makes it enjoyable, and is also what drives a feeling of achievement. In future pieces I really want to make sure I incorporate an anti-war message of peace,” he explains, adding bashfully, “I hope our murals can fulfill a similar role to John Lennon’s Imagine.”

Recent endeavors have included a mural to mark the fiftieth anniversary of the sister city partnership between Kyoto and Kyiv in 2021 as well as the Super Happy Train Project, done the same year. And for Miyazaki, as long as there are walls, paint, and people to paint with, anywhere can be a studio—an approach that provides continual scope for expansion of his activities.

He is bound only by one restriction: “I promised my wife and two young daughters that I would limit my long, self-indulgent, overseas mural painting trips to just once a year.”

And though recent years have seen such trips further restricted by the global pandemic, his next action is already in the pipeline: “It’s quite a big one, in Africa—700 murals on solar power installations in the Republic of Benin. Of course, I won’t be able to make it to every site myself, so I’ll be working with local artists. And right now, we’re working on ways to ensure the same level of quality and emotional investment in murals produced simultaneously across multiple locations.”

As ever, it is by facing down physical walls and painting upon them that Miyazaki Kensuke continues to break down metaphysical barriers for communities around the world.