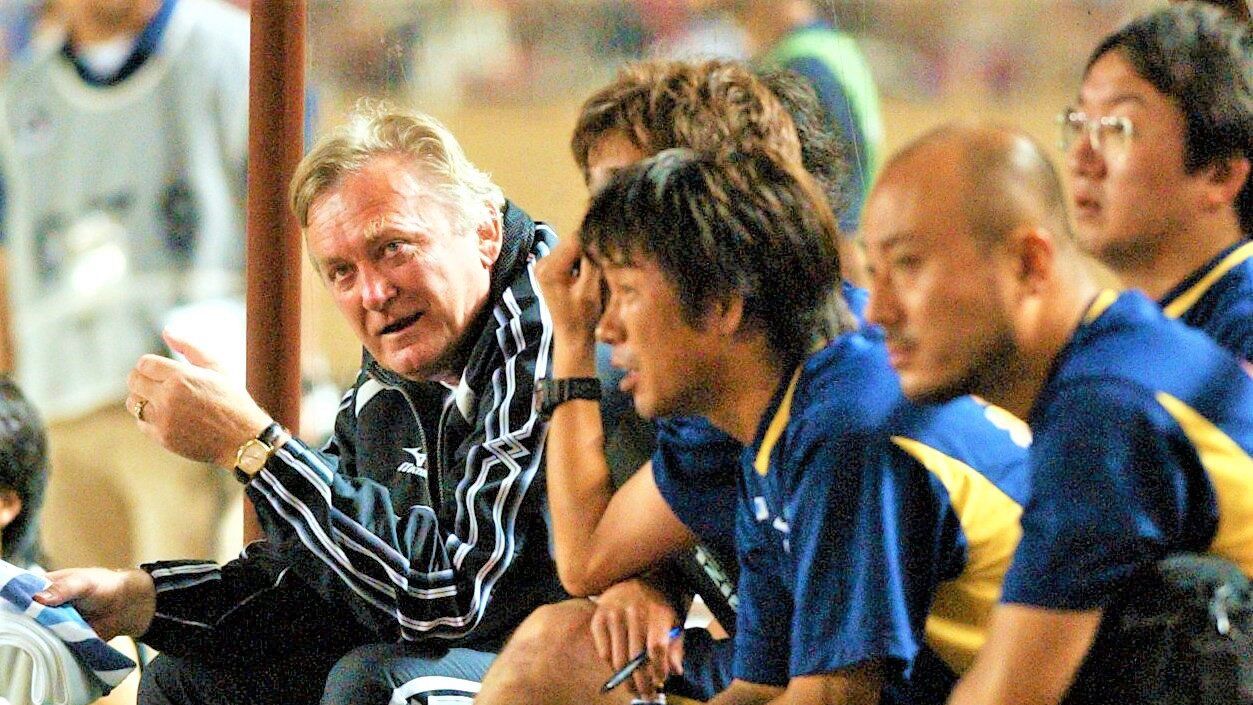 Sports Jul 26, 2022
Former JEF United Ichihara and Samurai Blue manager Ivica Osim, who died in May, won hearts in Japan both with his transformative approach to soccer and his philosophical insights into the game and human nature. A sports journalist reflects on the legacy of the stern-but-amiable Osim.

The death of former Japanese national soccer team manager Ivica Osim on May 1 was met in Japan with an outpouring of condolences. Japan Football Association Technical Director Sorimachi Yasuharu journeyed to Sarajevo, Bosnia and Herzegovina, for the funeral on May 14, and the following week JFA President Tashima Kōzō travelled to the city with his family to pay respects at Osim’s grave. Such an unprecedented display of reverence for Osim 14 years after his brief tenure leading Samurai Blue was cut short by a stroke speaks to the impact he had on soccer in Japan.

Osim came to Japan in February 2003. Although a successful manager in Europe, he surprisingly accepted an offer to take the reins of mid-tier J. League Division 1 side JEF United Ichihara (now JEF United Ichihara Chiba). Introducing a quicker, smarter style of play, he turned the small club into a title contender in just his first season at the helm. He cemented his reputation in 2005 by leading JEF to victory in the J. League Cup, giving the team its first trophy since the launch of the professional league in 1993.

JEF’s sensational rise owed to Osim’s introduction of a fast-paced playstyle—a revolutionary idea in Japan at the time and one that predated by nearly a decade the intense, attacking soccer that came to prominence following Germany’s dominance at the 2014 FIFA World Cup. JEF players zipped around the pitch, vexing defenders with their speed, positioning, and technique. In building the team, Osim implemented a carefully crafted training regime consisting of varied routines intended to force his player to think on their feet. Drills were compact, with Osim assigning small groups different scrimmage vests according to a specific set of instructions they were expected to follow.

Teaching his players to “run with purpose,” Osim transformed JEF from an average team into a squad boasting the speed and intensity of top European clubs. Although it would be an exaggeration to say that JEF was on equal footing with the world’s top-tier teams, Osim demonstrated beyond doubt that the high-paced, aggressive play characteristic of the upper echelons of the sport could be applied just as successfully in Japan.

While few managers in Japan at the time considered a faster, more intense playstyle as being suitable to Japanese players, and even fewer had the know-how to implement such an approach, Osim saw potential. His mind held a vast catalogue of ideas and unique insights on soccer. Some were rooted in the pick-up games he played as a youth in the narrow streets of his native Sarajevo, while others were inspired by observing sports like rugby, handball, and basketball.

Osim wove these disparate pieces into an overarching vision, applying each to the various aspects of his highly structured training regime. He challenged his players physically and mentally, but his approach was often lost on others. Even when Osim explained his reasoning behind drills, coaches and players struggled to see how they fit into the whole. But this was part of Osim’s genius as a manager. By keeping players on their toes, he forced them to think more deeply about their actions in games. The results were astounding. Moving with intent, JEF players outmaneuvered and outplayed their opponents. The revolutionary approach sent ripples through the Japanese soccer world.

Japanese Interpretations of the Game

Following Japan’s dismal showing at the FIFA World Cup in Germany, the JFA in July 2006 tapped Osim as manager of the men’s national soccer team. Taking over from predecessor Zico, he set out to “Japanify” Japanese soccer. “Japan’s goal is to be world champions, right?” he asserted in his characteristic sharp tone. “Well, it’ll never get there mimicking what everyone else is doing. If Japan wants to compete at the highest level of the game, it must strive to develop its strengths.” 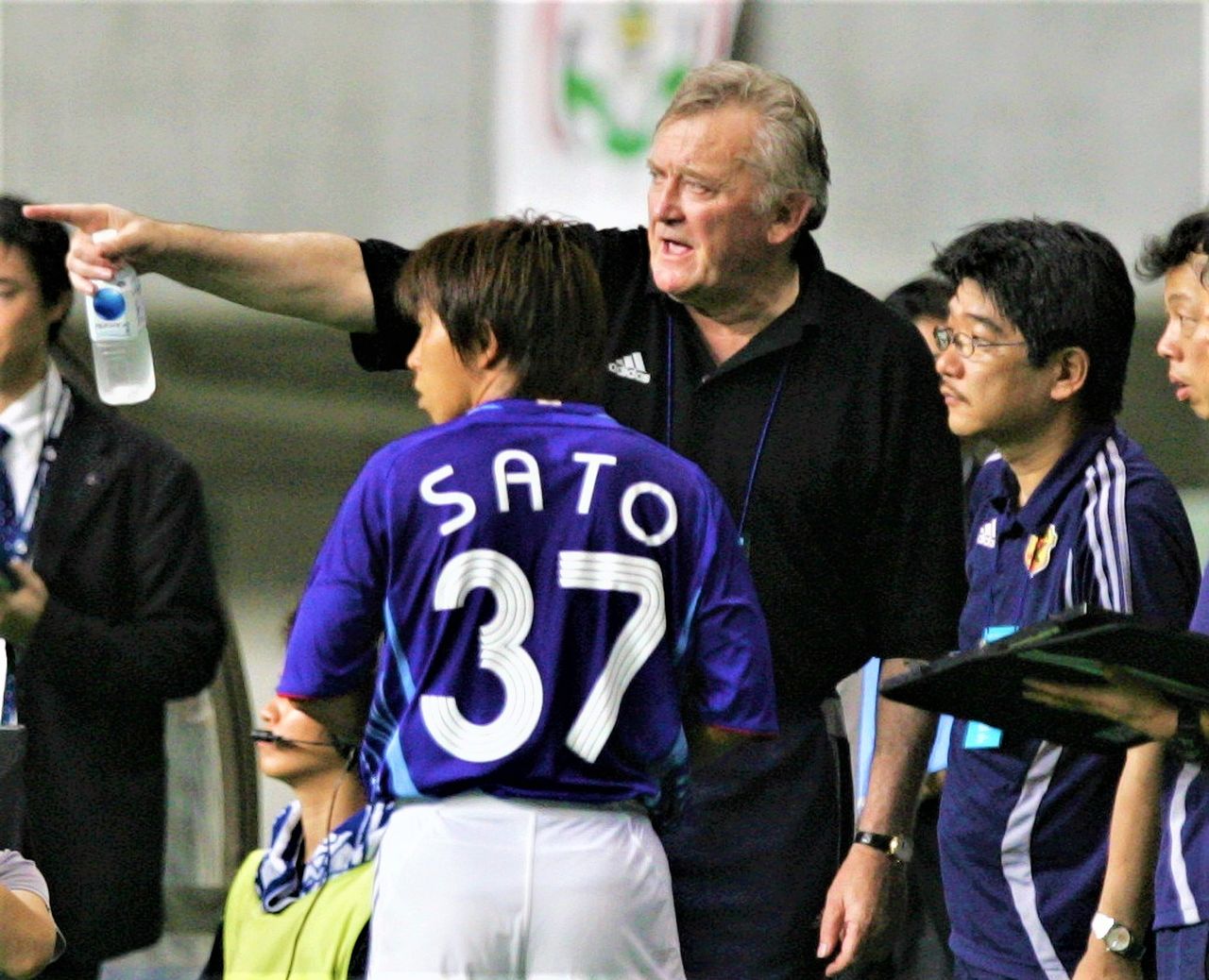 In the end, Japan had only a tantalizing glimpse of what might have been if Osim had brought his vision to fruition. Under Osim, Japan finished a disappointing fourth at the 2007 Asian Cup, but the team showed it was quickly coming together. Then two months later at a four-nation friendly tournament in Austria, Japan surprised onlookers by holding the host nation scoreless for 90 minutes before going on to down Switzerland 4—3 to lift the trophy in dramatic fashion.

Supporters watched eagerly as Osim’s vision of a Japanese style combining agility, intensity, and discipline with the skill and imagination of players began to take form. But everything changed when Osim suffered a stroke in November 2007 that left him in a coma. When he awoke, he faced a long bout of rehabilitative care before he could resume his coaching duties, which taken with other factors led him to step down as manager after just a year and a half.

This unrealized dream still haunts Japanese soccer to this day. Fans continue to fantasize at what could have been if Osim had seen his vision through to the end instead of exiting the picture prematurely. Osim, too, strongly regretted having to leave Japan without completing what he had set out to do. He continued to kindle a desire to manage somewhere in Japan. “I would love to have another go at a little club like JEF,” he asserted, even as he surely recognized that his health rendered such a dream impossible.

This emotional bond that Osim and Japan shared never slackened. It stretched like an invisible ribbon to Graz, Austria, where Osim lived, and extends now to his hometown of Sarajevo, where he is buried. 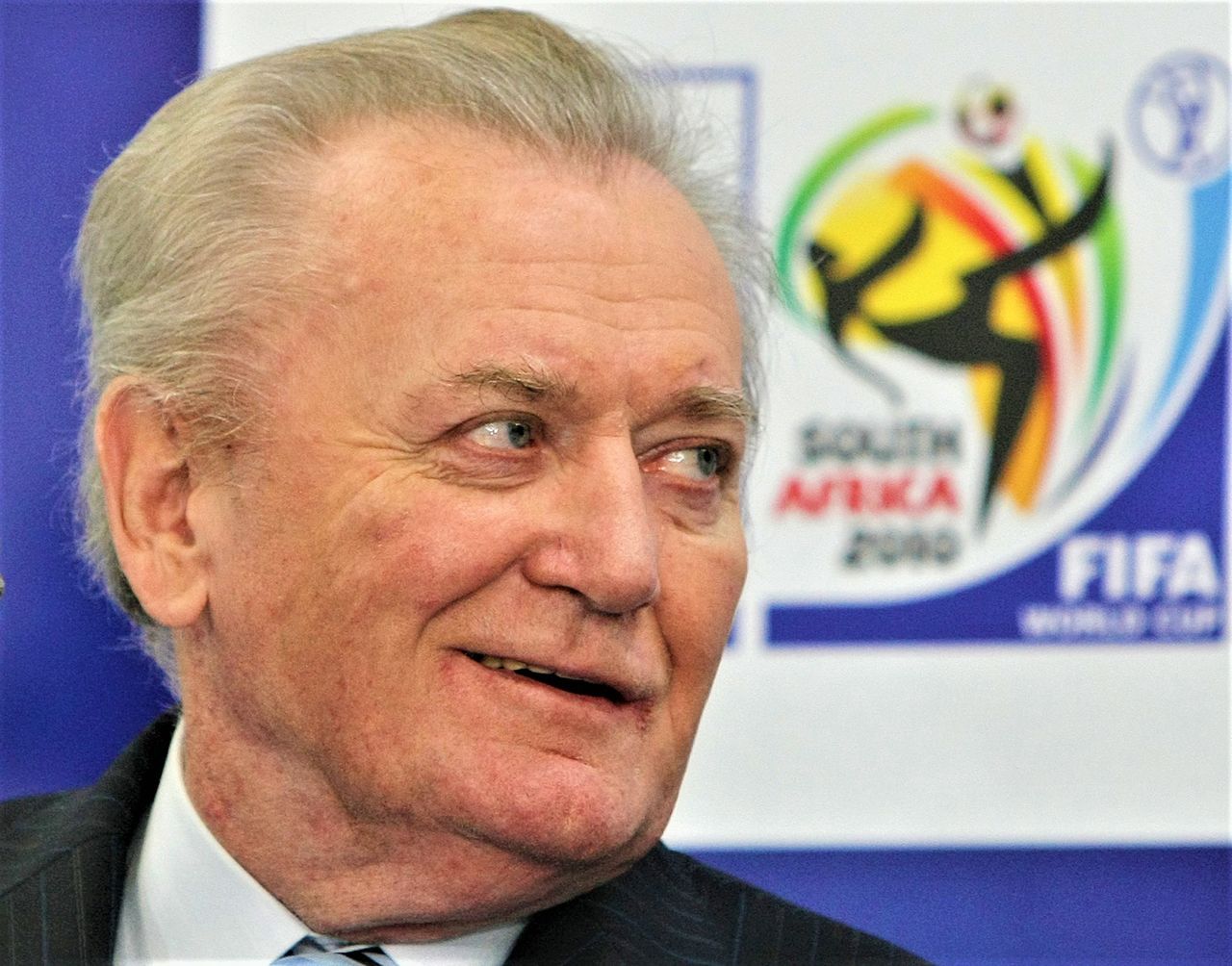 Although still suffering lingering paralysis due to his stroke, Osim returned to Japan to provide television commentary for the 2010 FIFA World Cup. (Photo taken at the National Stadium in Tokyo on December 3, 2009. © Jiji)

Japan’s ongoing affinity for Osim is unusual given his short tenure as manager. He would almost certainly have become a footnote to Japanese soccer if not for the deeply philosophical view he brought to the sport and life. It manifested itself in the steely looks he was known for, the concern he showed for his players and others, and his broad-minded nature. It formed the very backbone of who he was as a person and won him deep respect in Japan.

Osim expressed his views with insightful and often sharp comments. When pushed to remark on a player who had suffered a pulled muscle during a match, he quipped, “Does a hare strain a muscle when chased by a lion? The player should’ve warmed up better.” Another time he offered a distinct take on a lackluster performance by Japan, comparing the game to a meal that “lacked meat or fish or anything you might call a main dish.”

While he offered biting criticisms of the team, Osim also showed deep concern for staff and players. “As manager, I must weigh the consequences of my decisions,” he reflected. “When I take someone out of the starting lineup or have to cut a person from the team, I have to keep in mind how this will impact the livelihood of the player and his family.”

Osim also kept fans close to his heart. He saw them as the very reason why professional soccer exists in the first place, and he considered it his responsibility to build a team that lived up to their expectations. 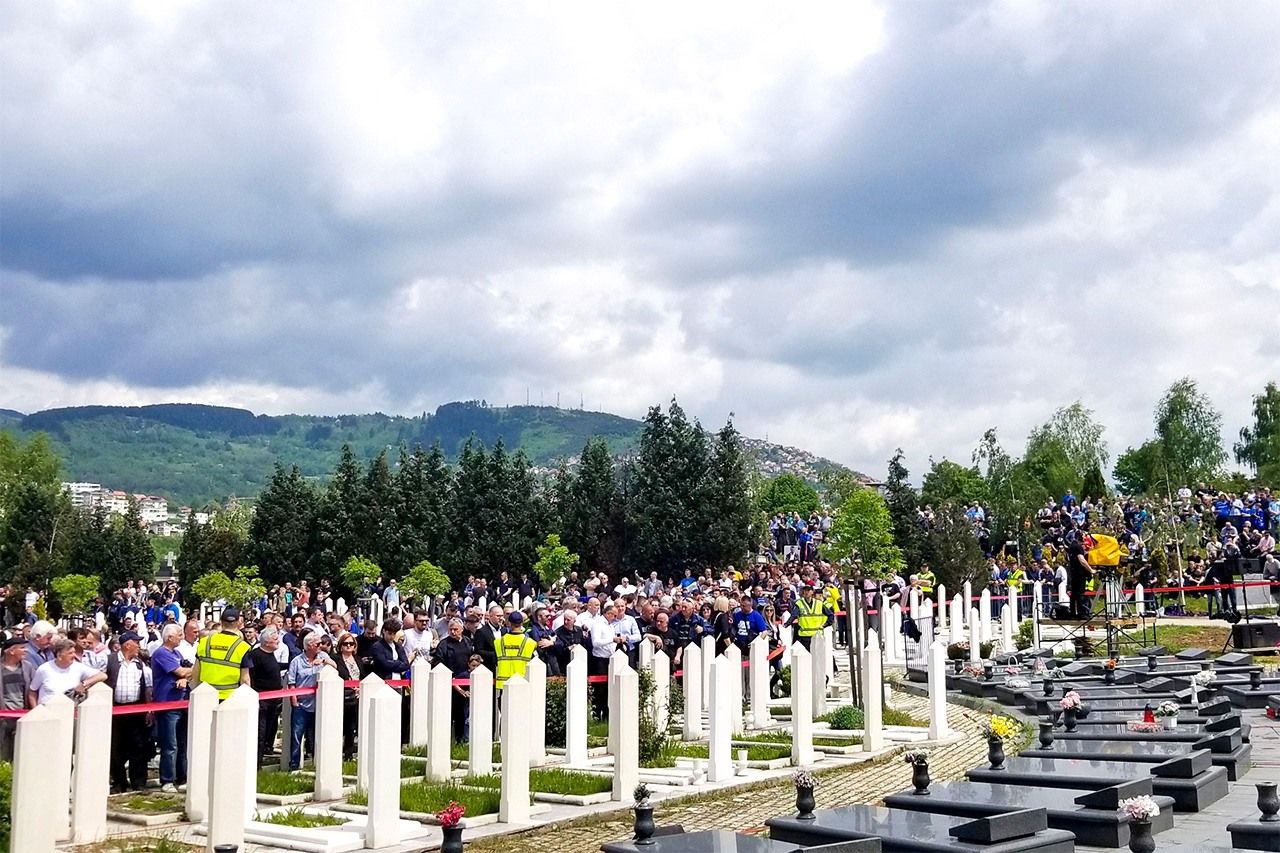 People gather at the cemetery during Osim’s funeral to say their farewells. (Courtesy of the author)

Even after Osim left Japan, the country remained dear to him. Japanese were moved by his words of encouragement following the Great East Japan Earthquake in 2011. “Now is a time for strength and solidarity,” he said in a short, powerful message that reflected his own experience with calamity. Osim knew what it was to have his home torn apart. He had spent over two years in Athens, Greece, during the Bosnian War (1992–95) and other conflicts that followed the breakup of Yugoslavia combing the airwaves at night with an amateur radio in search of the whereabouts of family members caught up in the strife.

“I wanted to be of service to people,” reflected Osim following Japan’s triple disaster. “I wasn’t sure how to go about this because of my health, but having lived through a catastrophe myself, I wanted to show support and impress on victims that they weren’t alone.” He expressed the need for communities to come together during troubled times. “To overcome difficulties, whether the result of accident and illness or earthquake and tsunami, people need to band together.”

In his message, Osim stressed to survivors that things would improve. “While the scars of the earthquake will remain, it’s possible to rebuild and live normally again.”

At 191 centimeters tall, Osim had an intimidating presence that was made all the more daunting by his penetrating gaze. To many he embodied the traits of the traditional Japanese patriarch, his tough words and hard exterior barely hiding a deeply compassionate heart. Osim, may you rest in peace.

Born in 1941 in Sarajevo in the former Yugoslavia (now Bosnia and Herzegovina). As a member of the Yugoslavia national soccer team, he participated in the 1964 Tokyo Olympics and helped the team to a second-place finish at UEFA Euro 1968, winning selection to the Team of the Tournament. Appointed manager of Yugoslavia in 1986 and led the team to the quarterfinals of the 1990 FIFA World Cup. Took over as manager of JEF United Ichihara in January 2003. Won the 2005 J. League Cup. Appointed manager of the Japanese national team in July 2006, posting a record of 12 wins, 3 losses, and 5 draws before stepping down in November 2007 after suffering a stroke. In 2011 he become president of the committee overseeing the Football Association of Bosnia and Herzegovina and worked to lift the country’s suspension from international competition. In 2016, received the Order of the Rising Sun, Gold Rays with Rosette from the Japanese government. Died at his home in Graz, Austria, on May 1, 2022.

(Originally published in Japanese. Banner photo: Ivica Osim, left, looks on from the bench during a JEF United Ichihara match at the National Stadium, Tokyo, on August 2, 2003. © Jiji.)