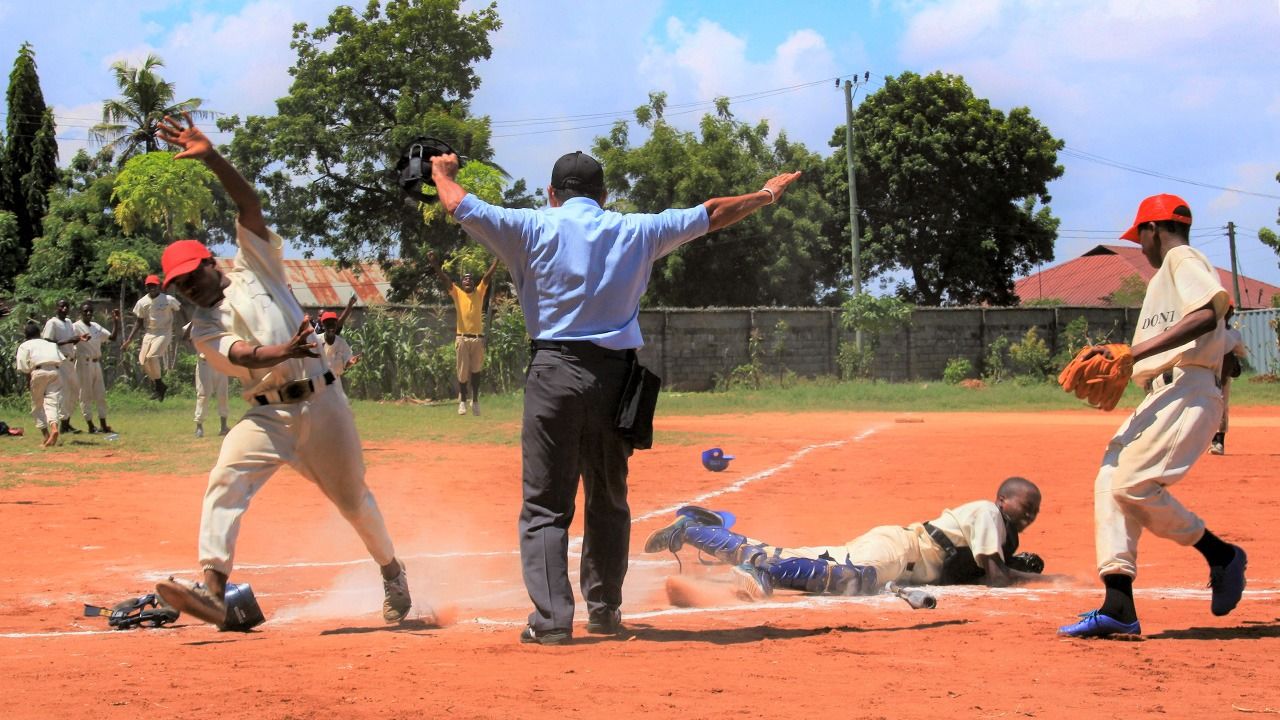 A Game for Kids: Children’s Development Through the Pan-Africa Kōshien Tournament

Sports World Education Jul 25, 2022
The passion of one Japanese baseball fanatic got the ball rolling in efforts to launch a pan-Africa high school baseball tournament modeled on Japan’s Kōshien event. We asked Tomonari Shin’ya about his plan and why baseball’s popularity is rising on the continent.

Catalyst of a Harebrained Scheme

The Japan-Africa Baseball and Softball Foundation (J-ABS) “African 55 Kōshien Project” aims to launch a competition that includes all 55 African nations, with the goal of promoting youth development through the sport. Former professional baseballer Matsui Hideki, who played in the United States and Japan with the uniform number 55, has endorsed the project and is encouraging others to lend their support.

Launching an all-nation baseball tournament in Africa, where there is comparatively little interest in the sport, sounds like a tall challenge indeed. But it may come to fruition, thanks to the concerted efforts of one baseball fanatic—the president of J-ABS, Tomonari Shin’ya.

For 25 years, Tomonari, a former employee of the Japan International Cooperation Agency, has helped to nurture baseball in Ghana, Tanzania, South Africa, and other countries.

When Tomonari played baseball as a student at Keiō University, he dreamed of becoming Japan’s number-one player. After graduation, his work took him to Ghana where, in 1996, he played in a match between Japanese players and a team of locals. Before long, he found himself the manager of Ghana’s national baseball team. 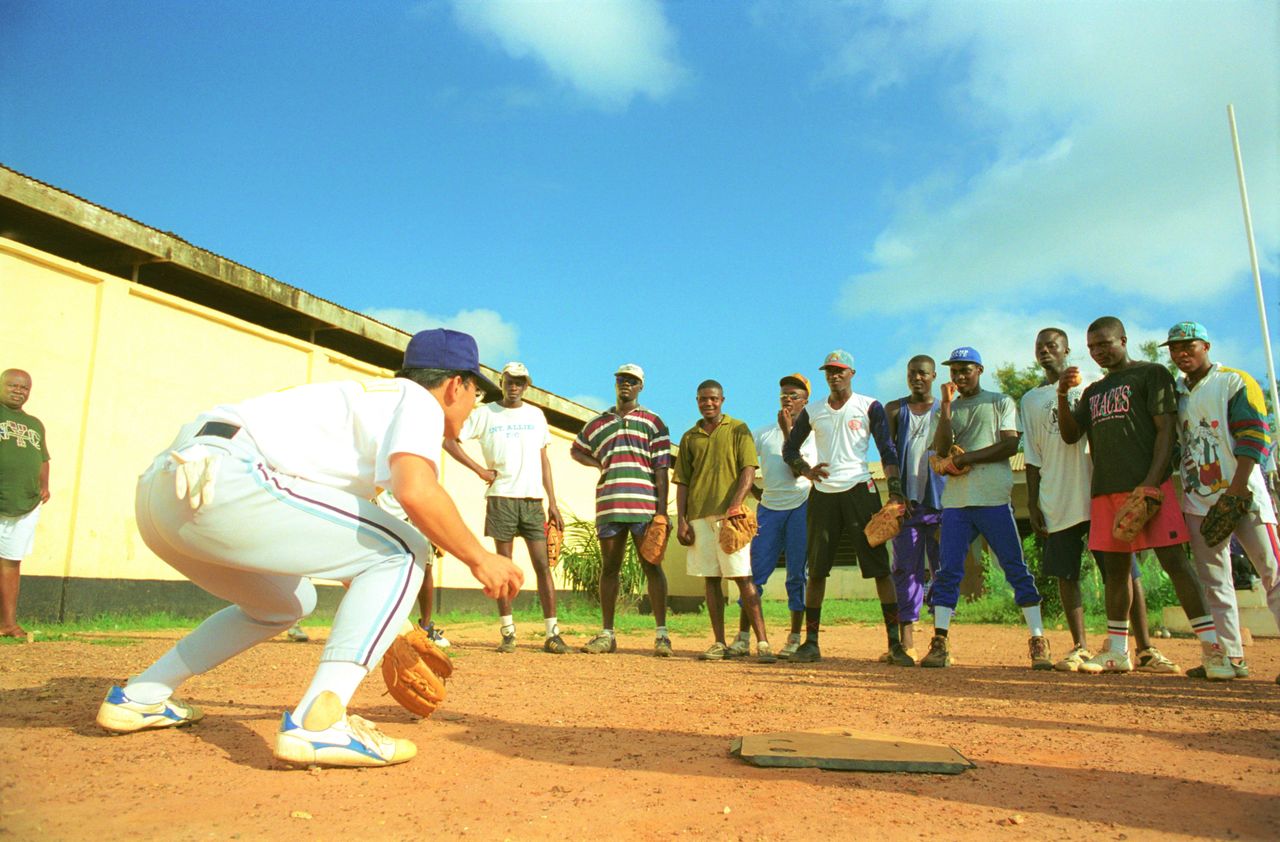 While working in Ghana, Tomonari passionately coached locals in baseball basics. He strives to inspire youth in all countries. (© Kazufoto)

Tomonari later helped to establish the Tanzania Baseball and Softball Association, and to launch a nationwide tournament, the Tanzania Kōshien. Among numerous other achievements, Tomonari even helped launch a baseball association in South Sudan—the youngest country in the world, having gained its independence in 2011—in spite of ongoing turmoil there.

He first came up with the idea for an African Kōshien in 2011, a year prior to his posting in Tanzania.

“On a trip back to Ghana, I checked up on the state of baseball there, and found it was still active. I’d been involved in the sport there from 1996 to 1999. At the time, I remember getting bread to feed the hungry players, and working hard to convince their parents and seniors of baseball’s merits, despite there being no money in it. Players I’d coached as children were then in their twenties, and had gone on to become coaches themselves.”

A delighted Tomonari proposed the idea of a nationwide tournament. He was motivated both by his elation and a strong sense of concern.

“At that time, I still held concerns for the future of baseball there, after it was dropped as an Olympic sport following the 2008 Summer Olympics in Beijing. With no professional league, Ghana could only fund baseball as an Olympic sport. Without this, funding dried up, and we lost a major incentive for youth to play. Colleagues in Ghana feared the demise of baseball in their country. This led to the idea of staging a Ghana Kōshien to replace the Olympics and to provide new aspiration.” 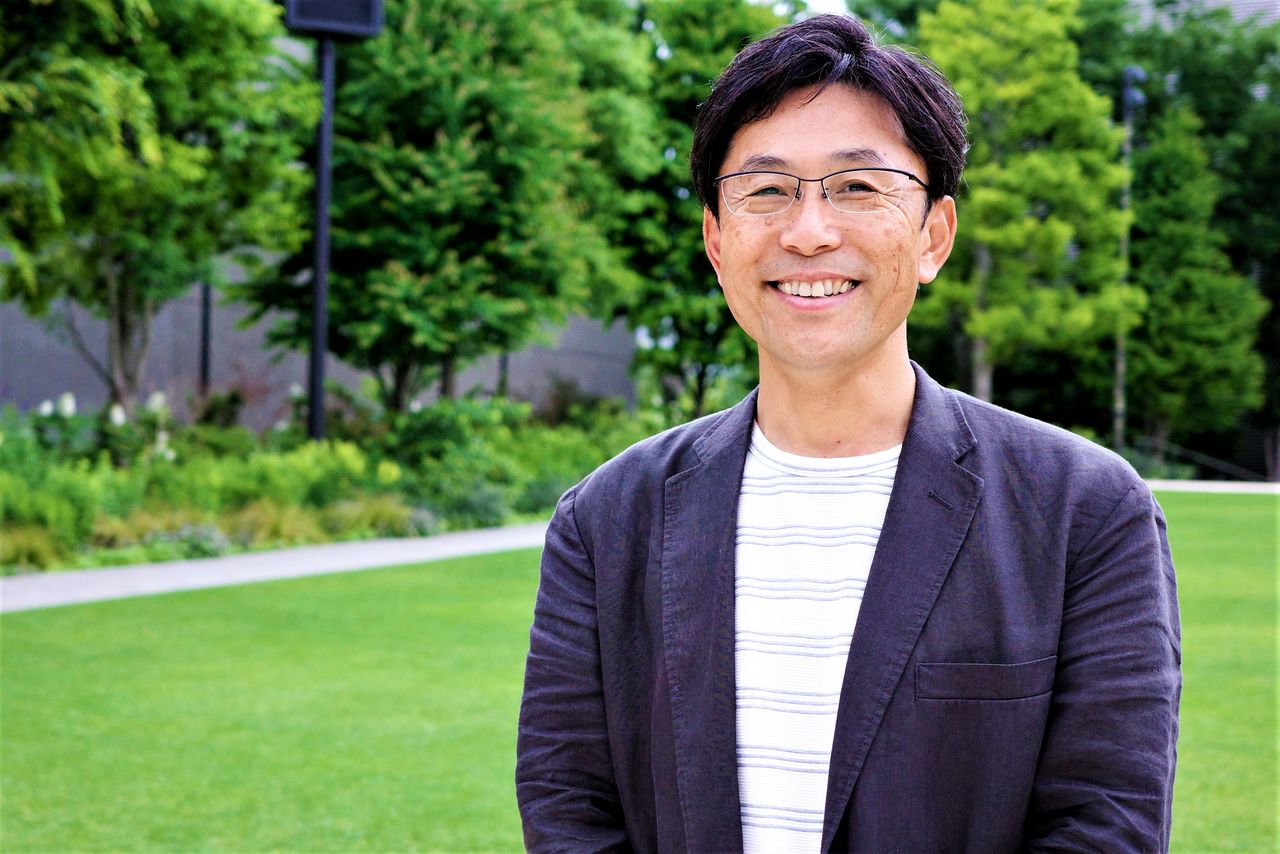 Tomonari was born in 1964. After graduating from Keiō University, he worked for Recruit subsidiary Cosmos before joining JICA. On the side, he helped launch an NPO, the Association for Friends of African Baseball. Since 2021, he has devoted himself to J-ABS as its president.

In the beginning, former players Tomonari had coached visited schools in and around the Ghanaian capital Accra, helping to launch teams at about 10 schools. A year later, Tomonari visited the schools to assess the outcomes and was taken aback at the gratitude expressed by the school principals.

They told him that not only the grades of students who played baseball had improved, they had also become more punctual, demonstrated leadership qualities, and had become model students.

Tomonari recalls: “I’d never expected such an impact. But looking back, I thought of how they formed two orderly lines to practice throwing and catching, and gave a bow when lined up in front of the bench before and after matches. Initially, even having them do this took time.”

When Tomonari was first posted to Ghana, he learned that baseball, introduced to the country by Cuba, was just keeping afloat. Later, when he transferred to Tanzania, he found no baseball there at all. But he was confident he could introduce the sport based on his experience in Ghana. With introductions from the government sports agency, he visited numerous schools.

It is important to note that he was still employed by JICA, and promulgating baseball was not part of his role. All his efforts were self-funded and carried out on his own time. But Tomonari felt compelled to spread the message of what a great game baseball is. In fact, the more barren the pickings, the more determined he became.

He presentations on baseball in Tanzania produced visible progress. As in Ghana, children who played baseball developed enthusiasm and became more punctual. They also applied themselves more to their studies.

“People in Africa are typically loose with time. For many years, I struggled to come to grips with this. Teachers in Tanzania also want to instill discipline​ into their students. But they do it by brandishing a whip. Whips are used at schools in both west and east Africa—possibly a legacy of European enslavement of the inhabitants. But when an Asian came and introduced baseball, suddenly the children became orderly and punctual. I’m sure it came as a big surprise to teachers. Because of the relatively slow pace of the game, with the time between pitches, it’s an easy one to teach. I think the coaching effectively leveraged that characteristic.” 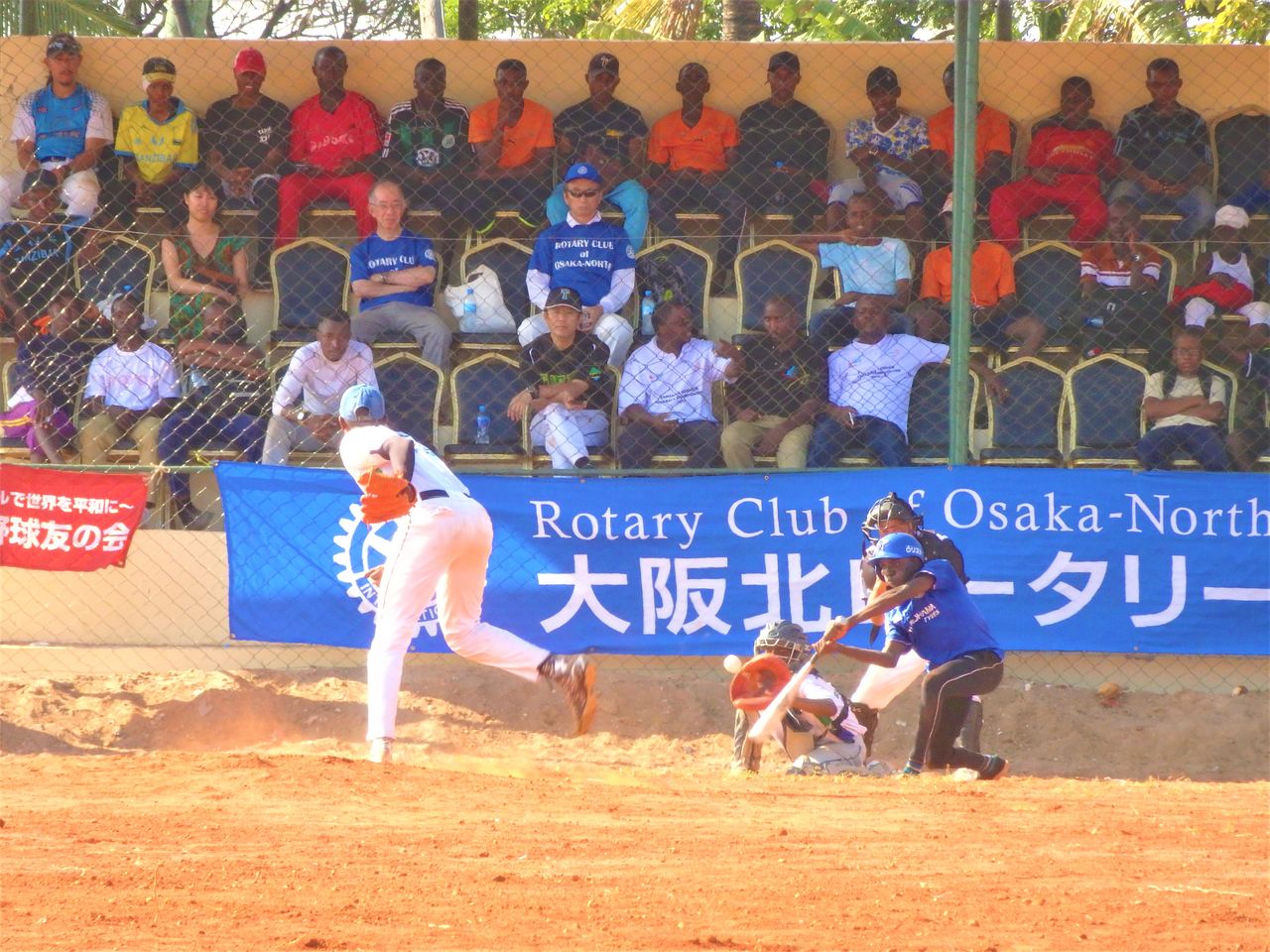 A national tournament staged in Tanzania. Whether pitching or batting, in typical African fashion, the players are unconventional. (© Tomonari Shin’ya)

In collaboration with a JICA Cooperation Volunteers team active in regional Tanzania, Tomonari began working to bring baseball to the country. Less than two years after Tomonari was posted there, Tanzania staged its first Kōshien national tournament.

Because of a JICA rule limiting each overseas posting to some three years, Tomonari left Tanzania in 2015, but the Kōshien continued, even during the COVID-19 pandemic. Last year, there were 12 schools participating, a number expected to increase for this year’s event, the tenth.

Tomonari’s third posting, to South Sudan, gave him food for thought. It came at the height of that country’s bloody civil war. A local JICA rule required that staff only venture outside in bulletproof vehicles, but Tomonari was undaunted.

One time, while he was riding a bulletproof car on a city inspection, he discovered an impressive playing field. In Ghana and Tanzania, athletes are generally forced to play their sports on rough, rocky fields, so he was surprised to discover such a fine grass field in war-torn South Sudan. He learned it belonged to the prestigious University of Juba, and had been rehabilitated by Japanese Self-Defense Force personnel there on peacekeeping operations.

That weekend, he traveled in a bullet-proof car to the field, where he found three youths lying on a bench in the shade. They told him they were resting due to the heat. He said the boys should be more active at their age, and suggested they play catch.

Tomonari fetched gloves and balls from the car—since his time in Tanzania, he habitually took them wherever he went.

Partly due to a dearth of recreation options, the group grew on successive weekends. Eventually, enough young people had assembled that they could form a baseball team. 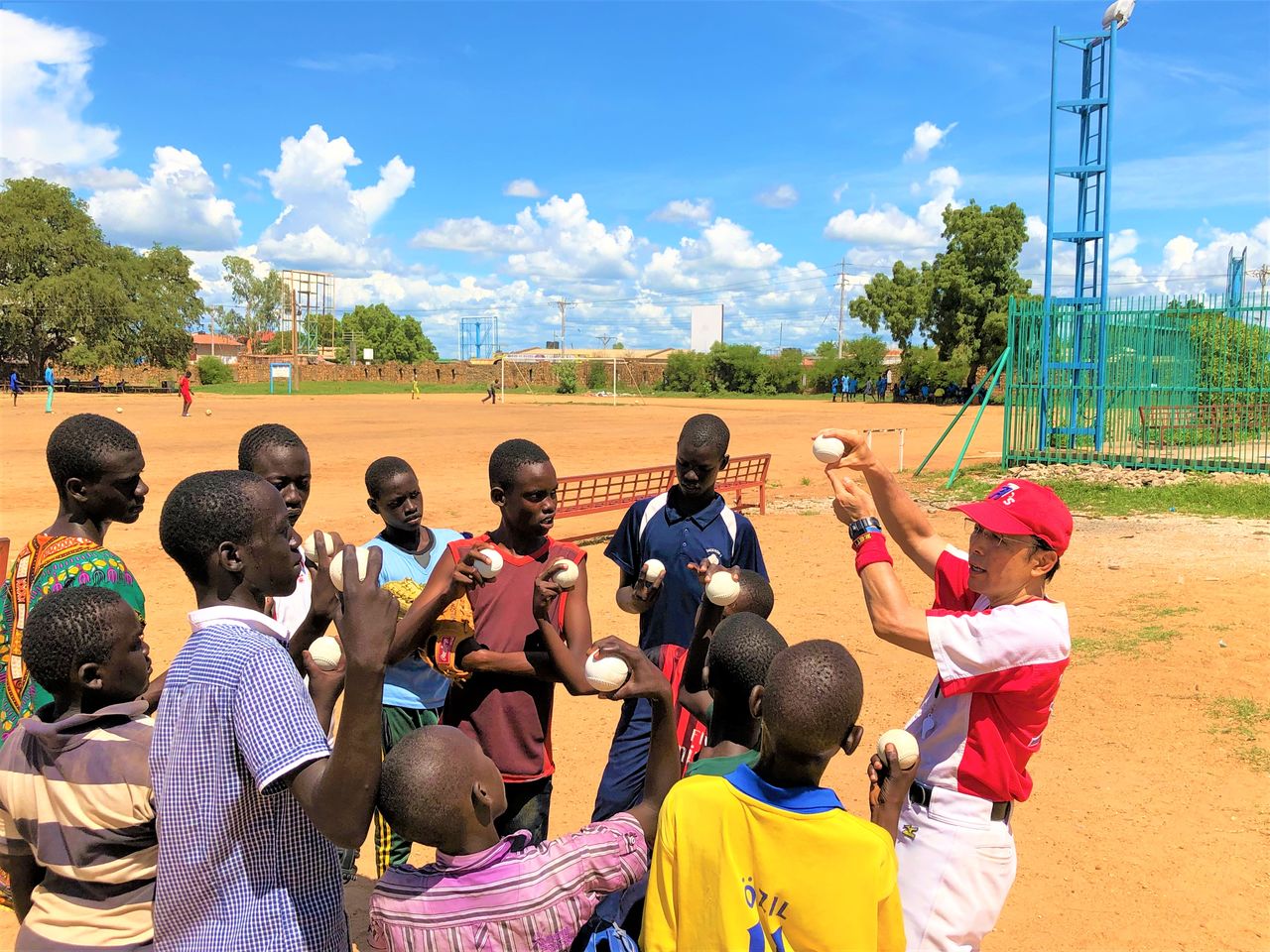 Tomonari was finally able to establish a baseball association in South Sudan, as he had done in Tanzania. His rationale is that, once an association is formed, it can handle tasks like raising needed funds and lining up support for the sport in political and business circles.

The South Sudan Baseball and Softball Association was launched shortly before the end of Tomonari’s two year posting, but he says he will never forget the general meeting when it was launched​.

“During a photo session for the association’s launch, the president, a member of the country’s second largest ethnic group, the Nuer, shook hands with the secretary-general, a member of the Dinka, the largest ethnic group. It was a historic moment. In a country that had suffered fierce ethnic conflict, and which faced difficulties even establishing a provisional government, somehow baseball had surmounted interethnic differences and brought people together. I saw how baseball had the power to bring peace!” he recalls enthusiastically.

“Africa suffers relentless poverty, illness, injustice, and other troubles. To overcome all this, I believe there is no alternative but to raise people who value justice, order, and respect. Japanese baseball has the power to help this happen. I also believe that if children play baseball, they will grow up to have an affinity with Japan, which can have great implications for our country.”

An all-Africa Kōshien may sound like a pipe dream, but the seeds sown by Tomonari are starting to see fruition.