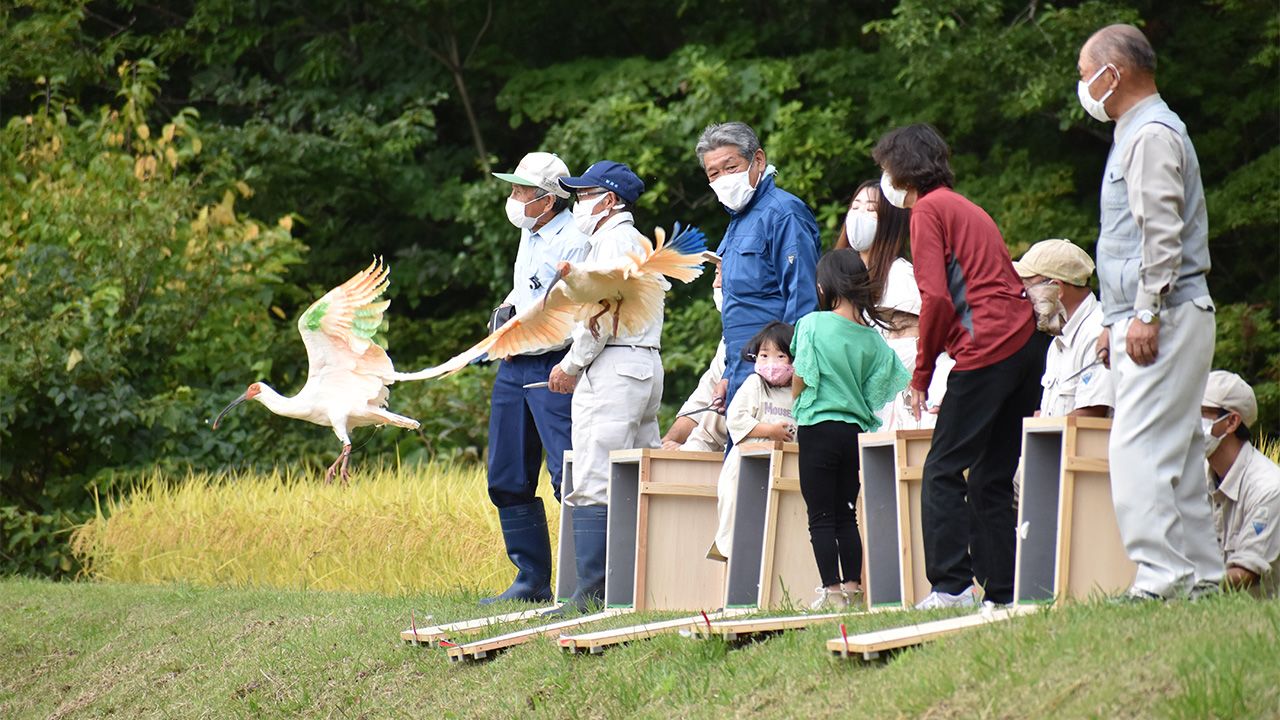 Bringing Back the Birds: Conservation Program Returns Crested Ibis to Skies over Sado

Environment Society Aug 15, 2022
The last wild crested ibis in Japan died in 2003, but a breeding and conservation program has reestablished the species on Sado in Niigata Prefecture using birds brought over from China. Agriculture, once the bane of the crested ibis, has been central to the so-called Sado model promoting a symbiotic relationship between humans and nature.

Turning Back the Clock

Floating in the Sea of Japan, the island of Sado in Niigata Prefecture is the only place in Japan where crested ibises live in the wild. Designated a special natural monument, the birds, known as toki in Japanese, tragically died out in Japan several decades ago. However, dedicated conservation work has returned the crested ibis to Sado’s picturesque forests and fields. 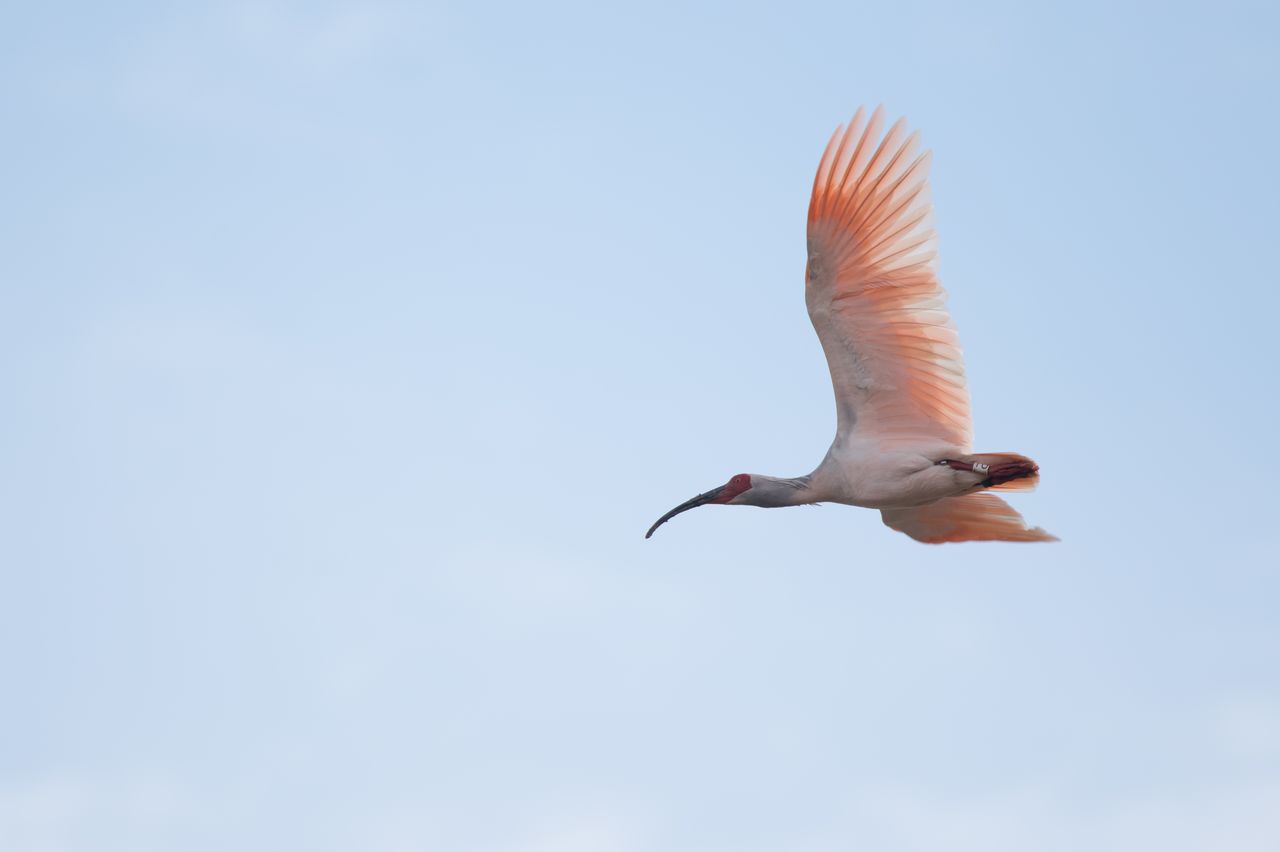 A crested ibis flies on the island of Sado. (© Pixta)

The majestic crested ibis was once abundant across East Asia. But starting in the nineteenth century, demand for the bird’s feathers as ornamental objects led to overhunting, which along with habitat loss caused populations to plummet. By the twentieth century, the species had been pushed to the brink of extinction.

In Japan, the last native crested ibis died in 2003. Over the subsequent 14 years, ornithologists and other experts tirelessly worked to reintroduce the species on Sado using breeding stock from China. Today, there are some 480 birds living wild on the island. Habitat restoration has been central to the success of the program and has benefited greatly from the cooperation of the agricultural industry. Previously the bane of the crested ibis, farmers have adopted conservation measures like reducing their reliance on agricultural chemicals and opening fields for use as feeding grounds for birds. Experts are now looking to apply what has been dubbed the “Sado model” to other parts of Japan in hopes of reintroducing the crested ibis on the mainland.

In September 2021, volunteers and others gathered in the Noura district in the eastern Kosado mountains of Sado to release five crested ibises into the wild. Wooden boxes containing the birds—three males and two females from one to two years old—were placed on embankments running between the terraced rice paddies of the hilly region, located some 350 meters above sea level. At a signal, the boxes were opened and the crested ibises emerged. Taking flight, they circled the area briefly before disappearing into the nearby woods.

The event was part of a government-funded program set up under the Act on Conservation of Endangered Species of Wild Fauna and Flora. The 1993 legislation, which aims to secure biological diversity and conserve a healthy natural environment, declares that endangered species of wild fauna and flora are “not only important components of ecosystems, but also serve an essential role in enriching the lives of human beings,” thereby contributing to “securing wholesome and cultured lives for present and future generations of citizens.”

Japan’s Ministry of the Environment established the crested ibis habitat breeding program on Sado with the cooperation of the local municipal government (comprising the entire island), various conservation organizations, and Niigata University. Birds are artificially bred and raised at the Sado Japanese Crested Ibis Conservation Center and two affiliated facilities on the island, along with breeding centers in the city of Nagaoka on mainland Niigata, Tokyo’s Tama Zoological Park, the Ishikawa Zoo in Ishikawa Prefecture, and the Izumo Japanese Crested Ibis Breeding Center in Shimane Prefecture.

Juvenile crested ibises marked for release into the wild are transferred to the conservation center on Sado and placed in special enclosures to allow them to acclimate to the surrounding environment. The cages recreate natural environs like wooded areas as well as agricultural fields. Spacious at 80 meters long, 50 meters wide, and 15 meters high, the pens give birds their first opportunities to fly longer distances. When the young crested ibises are able to forage for food on their own and have the wing strength to escape predators, normally after three months in the cages, they are ready for release into the wild.

Crested ibis are introduced into the natural environment either through a “soft release,” where the doors of the acclimation cage are opened, or a “hard release,” in which the birds are transported in carriers to a specific area and set free. Prior to release, birds are banded and their wings marked with different colors to aid in identification. Once in the wild, they are tracked with the help of volunteers.

The Ministry of the Environment’s Sado Ranger Office oversees the release and tracking of birds. The national government provides the office with over ¥100 million annually as part of the project, and two rangers on staff carry out their duties with the help of experts from Niigata Prefecture. The ranger office conducted 26 releases from 2008 to June 2022, averaging two a year, with 446 artificially bred crested ibises released into the wild so far. There are encouraging signs that birds are successfully breeding in the wild, and it is believed that the population of wild-born crested ibises now exceeds the number of surviving birds that have been released. 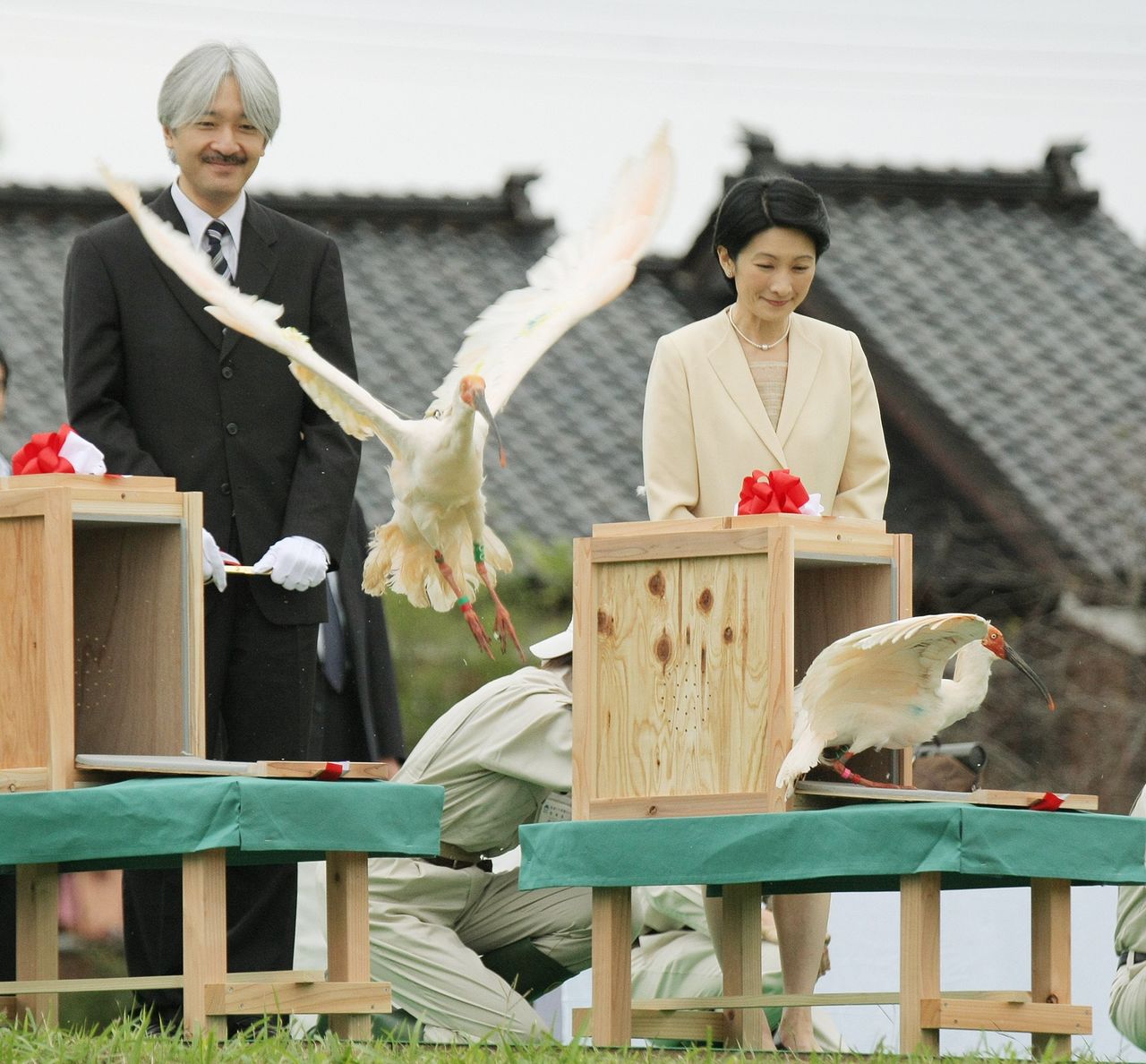 Crown Prince Fumihito and Princess Kiko attend the release of the first two crested ibises raised at the conservation center on Sado in September 2008. (© Jiji)

The choice of Sado for the crested ibis project stems from the island’s strong grass-roots conservation movement. Around the time Japan declared the crested ibis a natural monument in 1934, islanders, particularly farmers, began coordinating their conservation efforts, including surveying nesting areas and releasing prey like loaches and freshwater snails into rice paddies for birds to feed on. The Noura district became a center of the conservation effort, with residents establishing biotopes in the area and farmers reducing their use of agricultural chemical by half or more to reduce the effects on the health of the birds. Even today, a local Shintō shrine offers up prayers for the peaceful coexistence of crested ibises and humans.

Building on the work of these residents, the Niigata prefectural government established the Crested Ibis Conservation Center on Sado in 1967. However, breeding and other conservations programs failed to save the native population of birds from vanishing.

The crested ibis was only kept from disappearing entirely from Japan through close Sino-Japanese cooperation. In 1999, China presented Japan with a mating pair of birds. The first chick originating from the two was successfully hatched at the center through artificial incubation in the same year. China sent an additional three birds; the crested ibises on Sado today are descended from these five specimens. Chinese support of the Sado breeding program has continued, with two more birds arriving from China in 2018.

Rice Fields to the Rescue

A cornerstone of the Sado model for reestablishing the crested ibis in the wild has been the adoption of agricultural practices that promote biodiversity. When released, birds face the same dire environmental pressures as their vanished predecessors, most notably loss of habitat due to human activity. Modern cultivation practices such as reliance on agricultural chemicals and the fortification of farming infrastructure are the biggest culprits, as they severely impact the habitat of the small animals and insects that crested ibises feed on. Ongoing conservation efforts are a must for the current bird population to continue to thrive.

In 2004, the Sado municipal government received an unexpected opportunity to reverse some of the damage that modern agriculture has done. In that year, a typhoon ravaged the island’s rice paddies. In rebuilding Sado’s rice production capacity, city authorities and the local office of the Japan Agricultural Cooperatives made the decision to shift away from conventional farming practices and to introduce more environmentally friendly techniques.

Farmers were given the option of adopting specified practices to help increase the biodiversity of paddies. These included reducing the use of pesticides and chemical fertilizers by at least half, refraining from using herbicides on embankments between fields, conducting biodiversity surveys of paddies twice a year, and constructing irrigation canals. Producers implementing one or more of these measures received certification that their rice was “crested ibis friendly.” Major supermarket chain Itō Yōkadō began selling the certified rice at its stores in the Tokyo metropolitan area, helping establish it as a brand. It was later picked up by some 280 retailers around the country. Public elementary schools in the capital served the rice as part of school lunches and invited Sado farmers to give online presentations to students about the biodiversity-friendly approaches they used when growing the grain. 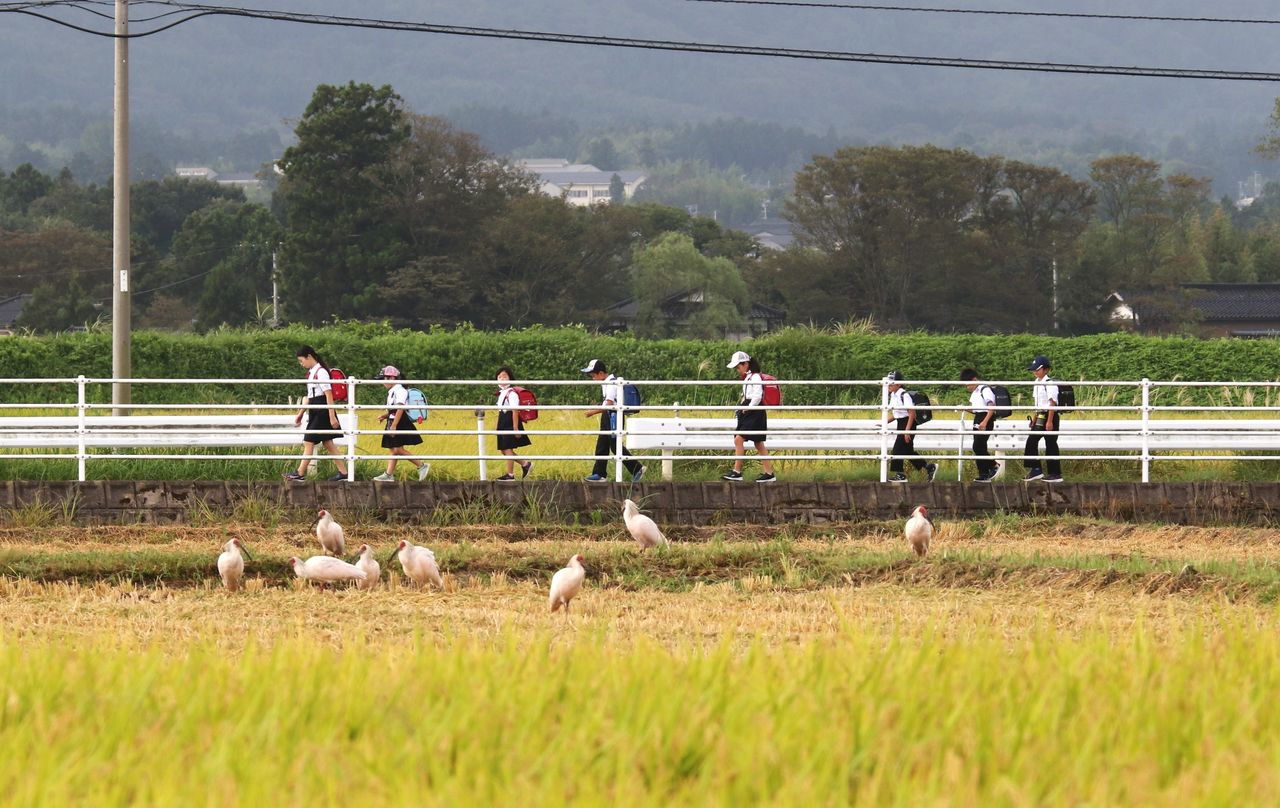 Elementary school students on Sado walk past a rice field where crested ibises are foraging in September 2020. (Courtesy of Tsuchiya Masaoki, chair of the conservation group Sado Toki Hogokai)

Conservation efforts on the island received a boost in 2011 when the UN’s Food and Agriculture Organization designated Sado, along with the Noto Peninsula in Ishikawa Prefecture, as Globally Important Agricultural Heritage Systems. The FAO recognized the island’s satoyama landscapes as providing important habitat for crested ibis, marking the first such designation by the organization in an industrially advanced nation.

I have seen the effects of Sado’s embrace of environmentally friendly agriculture practices firsthand while driving around the island. Passing along a stretch of fields, I encountered a swarm of dragonflies thick enough that I had to drop my speed for fear of killing the creatures.

Three years after Sado initiated its certification program, practices to promote biodiversity were being used on 20% of the island’s rice fields. Sado, like so many rural areas around Japan, is suffering under tremendous demographic strain. Each year, the population shrinks by around 1,000 people. While many farmers are older, they continue to make conservation a priority despite the extra labor involved, arguing that returning to previous methods is not an option when the survival of the crested ibis is at stake.

Sado Mayor Watanabe Ryūgo points to the certification system as helping growers on the island embrace sustainable farming practices. He notes that the success of the program in areas like reduction in the use of chemicals and the adoption of farming techniques to cut energy use and CO2 emissions has led the city to launch a new project promoting organic agriculture.

The Ministry of the Environment plans to use the approach from Sado to reintroduce the crested ibis to the mainland. It began accepting applications for habitat-building projects in May 2022, and after evaluating candidates it expects to make a final decision on sites in August. Among screening criteria are the requirements that an area have at least 15,000 hectares of habitat suitable for crested ibis, including rice paddies, waterfront areas, and forests, and the presence of ample support among the local community for making the necessary environmental improvements to agriculture.

The requirement of local support reflects the positive effects grassroots efforts have played in the success of Sado’s conservation program. The island boasts 20 volunteer groups dedicated to protecting the crested ibis. These have joined hands with the Ministry of the Environment, the Ministry of Agriculture, Forestry, and Fisheries, Niigata Prefecture, the Sado municipal government, and Niigata University, along with organizations like JA to form a conservation council where stakeholders can exchange information and coordinate activities.

Conservation efforts reach down to the youngest residents. Elementary schools on Sado, for instance, teach students about coexisting with the crested ibis, including requiring pupils to spend time in school fields, where they experience for themselves the labor involved in growing rice according to the requirements of the certification program.

Successfully recreating the Sado method in other areas of Japan cannot be accomplished by government policies alone. It requires bringing communities on board by showing local residents in clear terms what preserving the crested ibis involves, along with coordinating efforts of nongovernment organizations and national and local governments. The future of the crested ibis in Japan depends on everyone playing a role.

(Originally published in Japanese. Banner photo: Residents of the Noura district of Sado gather along the embankment of a rice field in September 2021 to release crested ibises into the wild. Courtesy of Konishi Yō.)