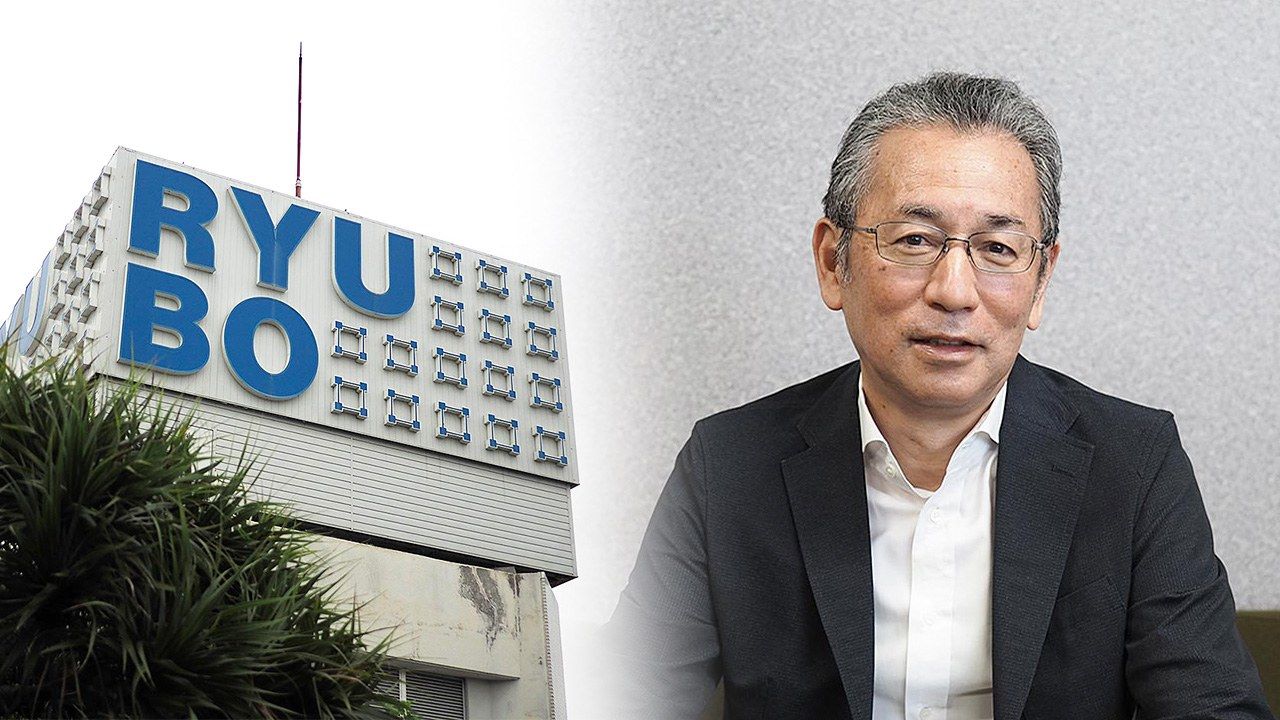 Economy Aug 4, 2022
Okinawa reverted to Japanese administration 50 years ago, in 1972. Although the prefecture continues to rank last in per capita income, local business leader Itokazu Gōichi—chair of Ryūbō Holdings, operator of Okinawa’s sole department store—asserts that reversion has been good for Okinawa’s economy. He talks about how the economy has grown and his company’s experiences and its future prospects.

Turn right from the exit of central Naha’s Kenchōmae Station, a 12-minute ride on the Yui Rail Okinawa Urban Monorail from Naha Airport, and Ryūbō Department Store, a white 10-story building, will soon come into view. 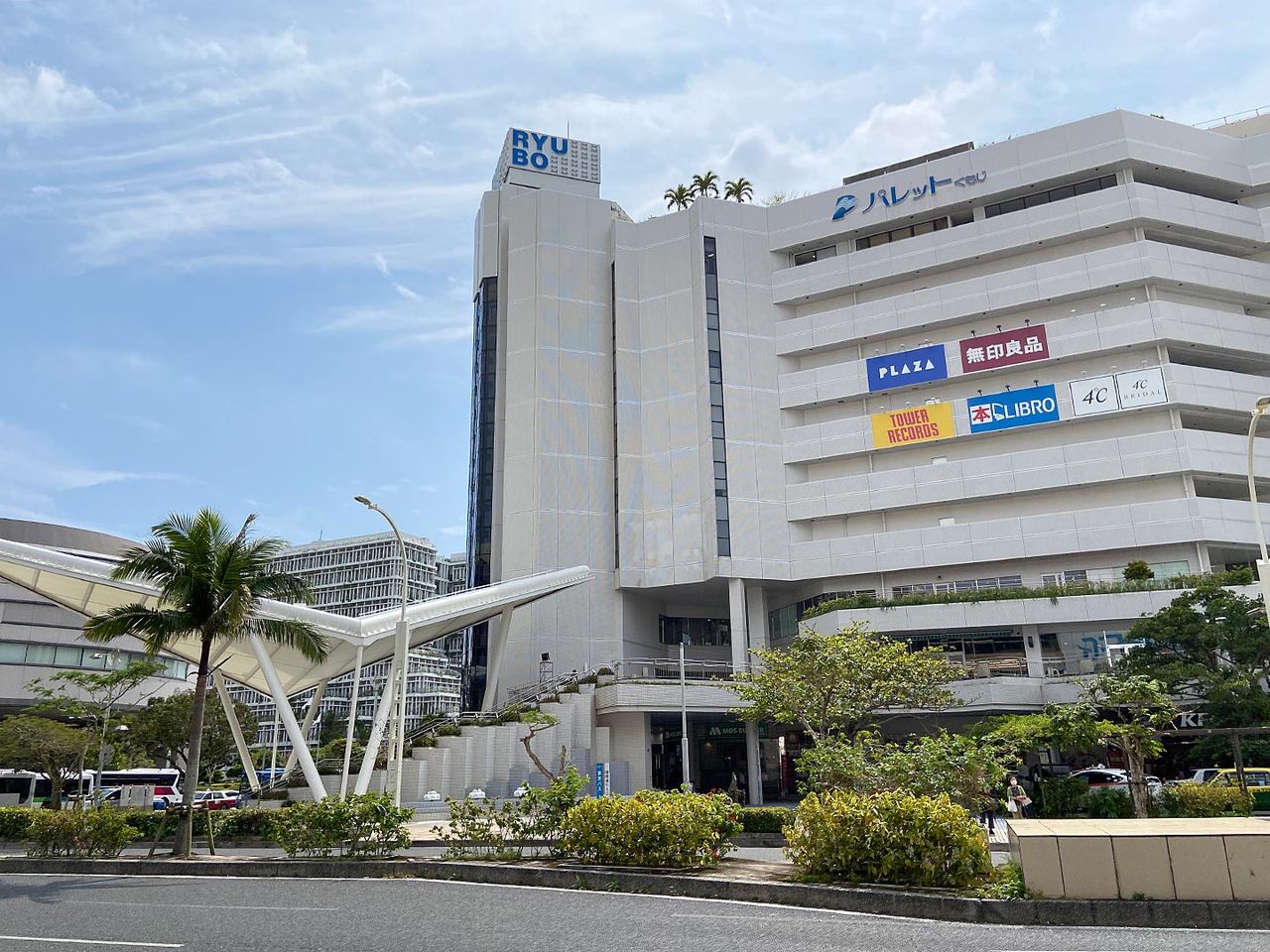 Ryūbō Department Store occupies a prime spot in central Naha, across from the Okinawa Prefectural Office and Naha City Hall.

Leading department stores like Mitsukoshi or Yamagataya previously had branches in Okinawa, but these operators have been shutting down outlets across the country, and Okinawa is no exception. Today, the only department store left in the prefecture is Ryūbō Department Store.

In addition to this department store, parent company Ryūbō Holdings is active in other retail businesses, including the convenience store chain Okinawa Family Mart and the Ryūbō Store supermarkets.

The conglomerate dates back to 1948, when the Ryūkyūs Trade and Commercial Company was set up to trade in goods with the Japanese home islands and foreign countries. The business later expanded into supermarkets and a department store, growing into a corporate group with yearly sales of over ¥100 billion. Ryūbō Holdings chairman Itokazu, who once served as CEO of Family Mart’s US subsidiary, is a leading figure in Okinawa business circles.

We asked the chairman for his take on changes in Okinawa’s economy and how Ryūbō Department Store has fared over the decades since reversion to Japanese administration.

To Itokazu, the benefits are obvious, beginning with free movement between Okinawa and the home islands. Whereas travel between the two had previously required a Japan Travel Document issued by the United States Civil Administration of the Ryūkyū Islands, the US governing body that ruled Okinawa, as of 1972 that document was no longer necessary.

“Business travel to the home islands shot up the moment Okinawa returned to Japanese rule,” says Itokazu. Emphasizing that the increased traffic in both directions had a positive effect on Okinawa’s economy, he notes that many individuals also traveled to Okinawa to impart their knowledge and skills.

Meanwhile, out of Japan’s 47 prefectures, Okinawa has the lowest per capita income and a large number of impoverished households. Itokazu admits that this is indeed an issue. “I don’t agree that the lag in per capita income growth, with Okinawa still at the bottom of the rankings, means that Okinawa’s economy has not grown. Living standards have greatly improved compared to 50 years ago.”

Based on his impressions of growing up in Okinawa, Itokazu says that in those days the number of poor households was even greater than today. In 1972, per capita annual income in the prefecture was ¥440,000, equivalent to 59.5% of the national figure. Today, Okinawa inhabitants’ income is ¥2.4 million, 74.8% of per capita national income. 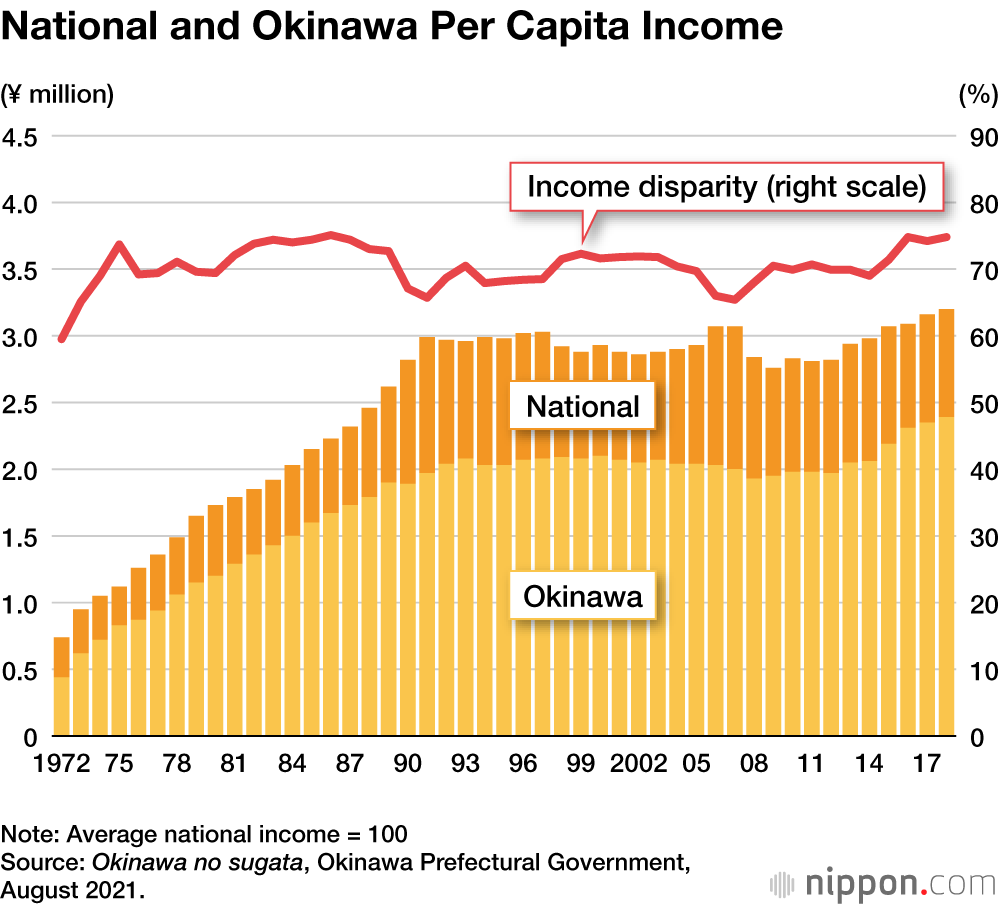 Ryūbō Department Store’s results directly reflect improved local living standards. Sales stood at ¥4 billion in 1972 but peaked at ¥18.17 billion in 2019, representing four-fold growth in 50 years. “In the retail trade, we deal directly with customers. If they can’t afford to shop, our business suffers too. The fact that the company has experienced continued growth since reversion is proof that Okinawa’s economy has gotten stronger.”

One driver of the department store’s success was a business tie-up entered into with Saison Group, parent company of Seibu Department Store at the time, thanks to a personal connection.

“Soon after reversion, Tsutsumi Seiji, then head of the Saison Group, came to Okinawa. Tsutsumi and Ryūbō’s CEO at the time, Miyazato Tatsuhiko, were fellow University of Tokyo alumni, and Tsutsumi, who wanted to help the Okinawan economy, enthusiastically proposed the business relationship.” 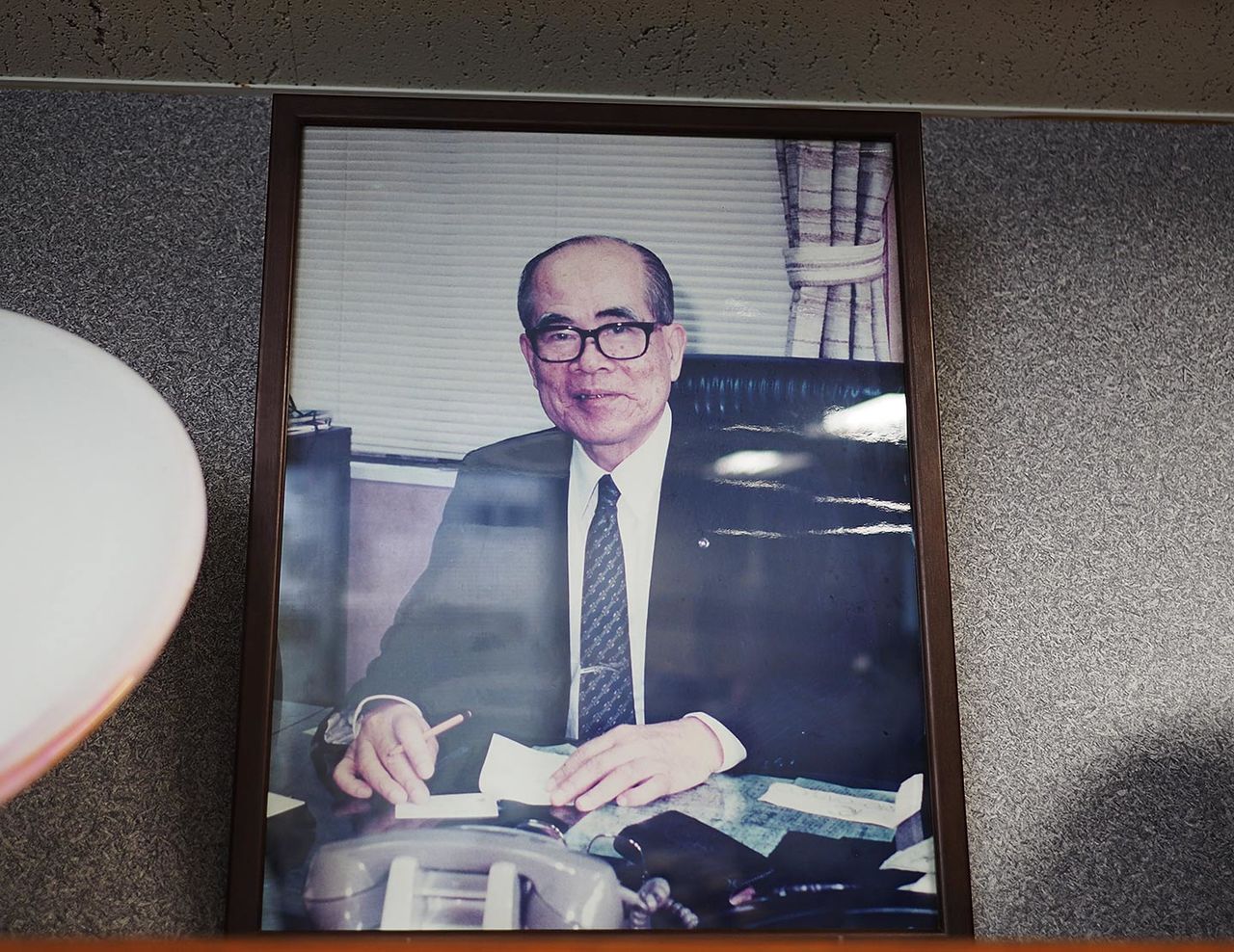 The late Miyazato Tatsuhiko, who nurtured Ryūbō to become one of Okinawa’s leading businesses.

“The arrangement enabled Ryūbō to stock all kinds of merchandise from the home islands. Saison Group also dispatched many employees, who shared major Tokyo department store savvy with our staff. In this way we obtained a broader range of goods to sell, while also building personal relationships with the Saison Group’s people.” Although the tie-up was later dissolved, the knowledge gained contributed greatly to Ryūbō’s success.

Many local businesses, not just Ryūbō, benefited from postreversion economic development. But according to Itokazu, Okinawa is still behind in many areas, one of which is the desire to make skills stick.

“People here often lack the gumption and don’t work hard enough to improve their skills. Instead, there’s a tendency to sit passively, waiting to be spoon-fed knowledge. Unless they learn and improve so that they can excel, they won’t absorb the know-how. That’s where Okinawa is weak, and unless that changes, prefectural per capita income will always stay the lowest.”

The COVID-19 pandemic, which has kept tourists away en masse, has also been a blow. Itokazu stresses that to survive and thrive, Ryūbō will need to learn skills and know-how and develop home-grown abilities. It also needs a unique selling point, and what Itokazu envisions is a niche strategy.

“Going forward, we’ll be actively searching out and stocking niche products from overseas. For major department stores that’s not a profitable approach, but I think Ryūbō needs to develop expertise in this area. And even though they may be niche, we can make a profit by offering many such products. That’ll really attract people who like this sort of thing. Besides, we would have no competition, because other businesses don’t deal in that kind of product. If we were just selling trendy items, we’d face price competition, and there’s no way we could win against bigger stores.”

Adopting a business strategy of selling broad varieties of niche products from all over the world, Ryūbō hopes to still be a going concern 30 or 50 years from now. Itokazu believes that Okinawa is very good at taking advantage of niches in the market.

“Okinawa has always done business like that, from the days of the Ryūkyū Kingdom, [established in the fifteenth century in what is now Okinawa Prefecture]. The kingdom’s survival strategy was to trade extensively with its neighbors on the Asian continent, gathering goods from throughout the region and making a profit by acting as a waystation for onward trade.”

Itokazu believes that the same idea can work for Ryūbō. In fact, prior to 1972, Ryūbō buyers would travel to other countries aboard American military aircraft and bring back all sorts of merchandise not found in Japan, making Ryūbō a must-shop destination for people hoping to obtain imported goods.

Although Ryūbō stopped selling imported merchandise after reversion, Itokazu is keen to revive that business, and has been working on the idea by hiring more buyers. He hopes that Ryūbō will soon be selling niche products from all over the world.

“My ambition is to buy goods from abroad for sale here exclusively and draw home island customers looking for unique products to Ryūbō Department Store. I’d like to make imports the name of the game again for our store and continue helping Okinawa’s economy to grow.”

(Originally published in Japanese. Banner photo: A composite photo of Itokazu Gōichi, chair of Ryūbō Holdings, and the Ryūbō Department Store sign atop the building. Itokazu is also president of Ryūbō Industry, which operates the department store. All photos © Fushimi Manabu.)