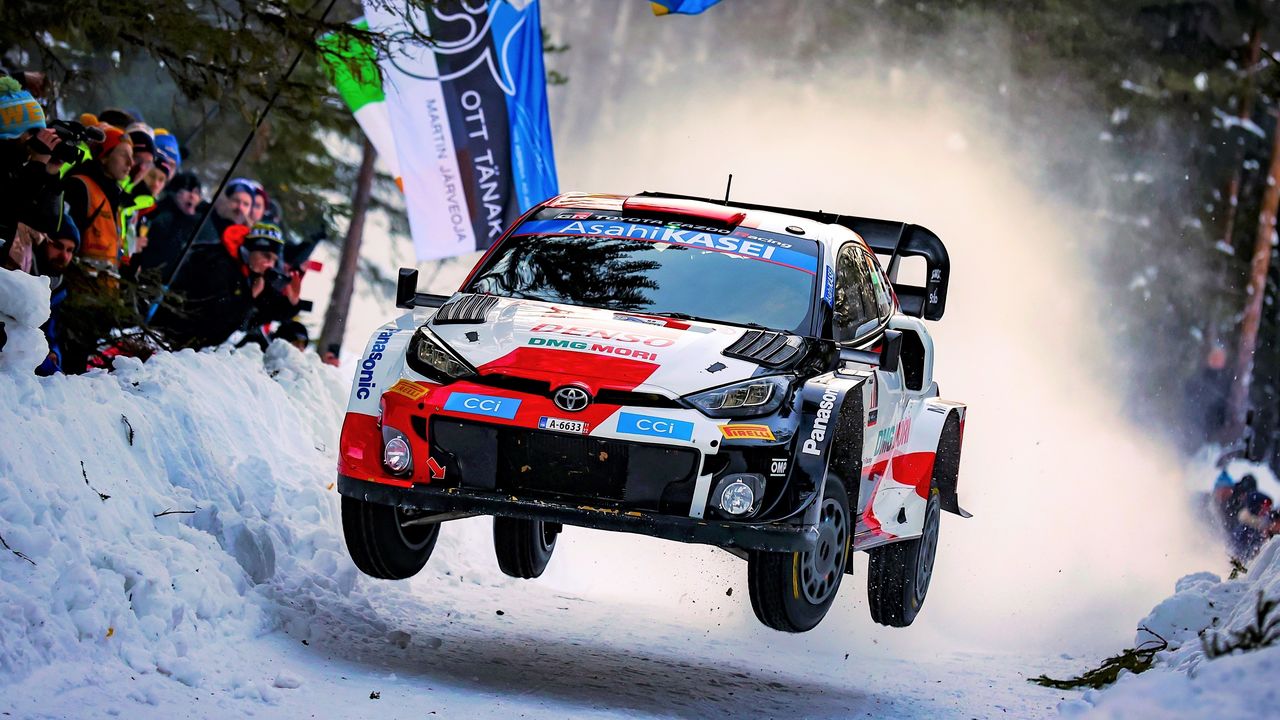 Escaping Boredom: Toyota’s Pursuit of the Hearts of Car Lovers

Economy Technology Sports Sep 5, 2022
Toyota’s car manufacturing, which was ridiculed as “boring” a decade ago, has changed completely in recent years. The company’s brand image has improved significantly, and in the fiscal year ending in March 2022, the company posted a record profit. All of this started with the thoughts of the current president, Toyoda Akio.

In 2007, sports cars disappeared completely from Toyota’s lineup. When looking only at the numbers, the idea that “sports cars are unnecessary” is a valid business argument. As evidence of this, Toyota at that time became the world’s number one company in terms of sales volume. However, on the other hand, the company lost its reputation among car enthusiasts, who turned away from the “boring” company that “doesn’t have the cars I want.”

Fifteen years onward, Toyota has changed a lot. Although the automobile industry continues to face a harsh environment due to the pandemic, soaring material and logistics costs, and semiconductor shortages, in the fiscal year ending in March 2022, the company marked record highs in sales, operating income, and net income. Furthermore, models like the GR Supra, GR Yaris, GR86, and GR Corolla are available, giving Toyota a deeper sports car lineup than other manufacturers. To supercharge its development of vehicles for the masses, Toyota is actively participating in motorsports, too, from the base to the top categories. At some point, the company’s reputation in the eyes of enthusiasts also turned around, and today Toyota is seen as a compelling maker of cars that people want to drive.

What has changed Toyota? The answer is neither technological innovation, capital investment, nor human resource enhancement, but a “mind change” among the employees. What led to the change was President and CEO Toyoda Akio’s desire to make even better cars—a return to the drive seen at the founding of the company.

Toyota’s predecessor, the Toyota Automatic Loom Works Automotive Division, was established in 1933. Since then, the company has built up its technology, experience, and know-how in car manufacturing through repeated trial and error. The best way to prove this was to compete with rivals—that is, to test Toyota vehicles in international races.

Rally is the first motorsport that Toyota participated in. In 1958, the firm took part in the 16,000-kilometer Around Australia Mobilgas Trial, known as the world’s longest and toughest automobile competition, in a Toyopet Crown. Although 50 of the 102 cars that participated in the event had to retire, Toyota managed to complete the race, demonstrating its technological prowess to the world.

Its first circuit race was held at the Suzuka Circuit in 1963. This was the Japan Grand Prix Auto Race, the first internationally certified competition to take place in the country. While domestic and foreign vehicles participated in the races, Toyota conquered all of the events it participated in, proving its high level of performance.

All Japanese automakers were actively involved in motorsports at the time, driven by a commonly understood equation: winning in motorsports meant earning trust from users, receiving recognition as a maker of high-performance cars, and thereby enjoying increased sales. However, in the 1970s, automakers temporarily stopped participating in motorsports due to the effects of exhaust gas regulations and oil crises. The return to the motorsports scene started in the 1980s. After surviving the exhaust gas regulations, automakers seemed to be shaking off the cobwebs with their fervent pursuit of higher performance in their vehicles. Motorsports was the perfect field on which to prove this, with its emphasis on speed.

During Japan’s bubble economy, attention to motorsports increased. F1 racing was at its peak, and manufacturers participating in races no longer viewed racing as a “running laboratory” for their new technologies, but also as a way to promote their brands. Huge budgets were invested and special vehicles and items were developed with a focus on winning. As a result, though, many came to view motorsports vehicles and mass-produced vehicles as completely different things, and it became difficult for common car enthusiasts to develop an interest in racing.

Furthermore, as a result of repeated withdrawals from and returns to the racing scene, triggered by events like the collapse of the bubble economy and the global financial crisis of 2007–8, the traditions of technology gained from motorsports ceased, and the reasons for manufacturers to be involved in motorsports faded.

The President on the Race Track

Toyoda Akio, who had not yet been appointed as president at the time, and Naruse Hiroshi, a master test driver considered the cream of the crop of Toyota’s driving team, had doubts about this situation. The two of them had a master-student relationship through driving, and their common idea was to “strengthen people and cars through motorsports, leading to the creation of even better cars.” This represented a return to the basics of company founder Toyoda Kiichirō’s philosophy.

Naruse once said to Toyoda: “People who don’t even know how to drive are perfectly willing to say this and that about cars. At the very least, they should learn how to drive before opening their mouths.” This prompted Toyoda to take driving training, after which he took the steering wheel himself and entered races under the name of “Morizō.” 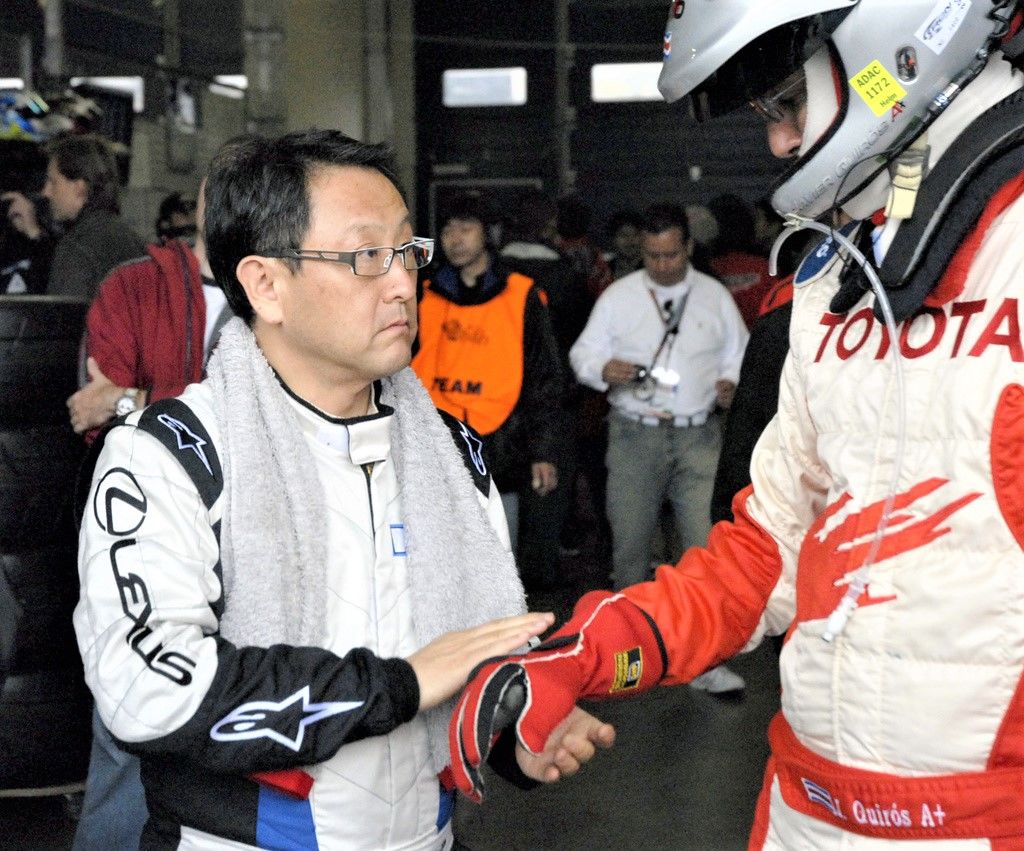 Akio Toyoda (left) talking with his teammates at the Nürburgring 24 Hour Endurance Race. Taking the steering wheel himself, he participates under the name of Morizō. (May 22, 2009, Germany) © Kyōdō

In 2007, the two of them launched Gazoo Racing, and they decided to participate in the Nürburgring 24 Hour Endurance Race. Through 24-hour races on some of the world’s toughest courses, they trained people and cars, with the purpose of feeding back the knowledge and know-how gained from this process to the creation of even better mass-market vehicles. The professional drivers involved in these competitions are Toyota’s front-line evaluation drivers. This is an extreme form of human resource development that gives the company a bird’s-eye view over the development of the entire car.

Initially, this was not recognized as an official Toyota project, and it was treated more like a club. Two used Altezzas took part in the first Nürburgring race. Most of the mechanics were Toyota employees, and they finished their first 24-hour race in an almost shell-shocked condition. Members at the time said that “just finishing the race was a miracle.”

Toyoda was appointed president in 2009, but was not allowed to use the Toyota name for the team. However, as its activities gradually began to be understood by the company, their scale expanded year by year. Then, in 2015, eight years after the first challenge, the team received full official status as the Toyota Gazoo Racing squad. Since 2017, as the GR Company, this unit has been leading Toyota’s motorsports activities.

The GR Company, the smallest organization in the Toyota group, is a manufacturer; at the same time, the “race shop” participates as a works team for the World Rally Championship, the World Endurance Championship, and the Nürburgring 24 Hours. These motorsports activities are positioned as a development arena rather than a PR tool. The company fields full teams of engineers and mechanics in each racing category, building a system that directly invests the know-how, knowledge, and human resources acquired there in the development of mass-produced vehicles.

Since the GR Company became independent, it has been working on a carbon-neutral initiative in cooperation with the private “Rookie Racing” team created by President Toyoda. Toyota has announced that it will do its utmost to achieve carbon neutrality, but it has emphasized multiple solutions for powertrains, saying, “It’s not good to narrow your options; there isn’t just one correct answer.”

When the debate on next-generation mobility first started, newspapers and economic media supported the shift to battery electric vehicles in Europe, ridiculing Toyota’s methods as “halfway” and “outdated.” 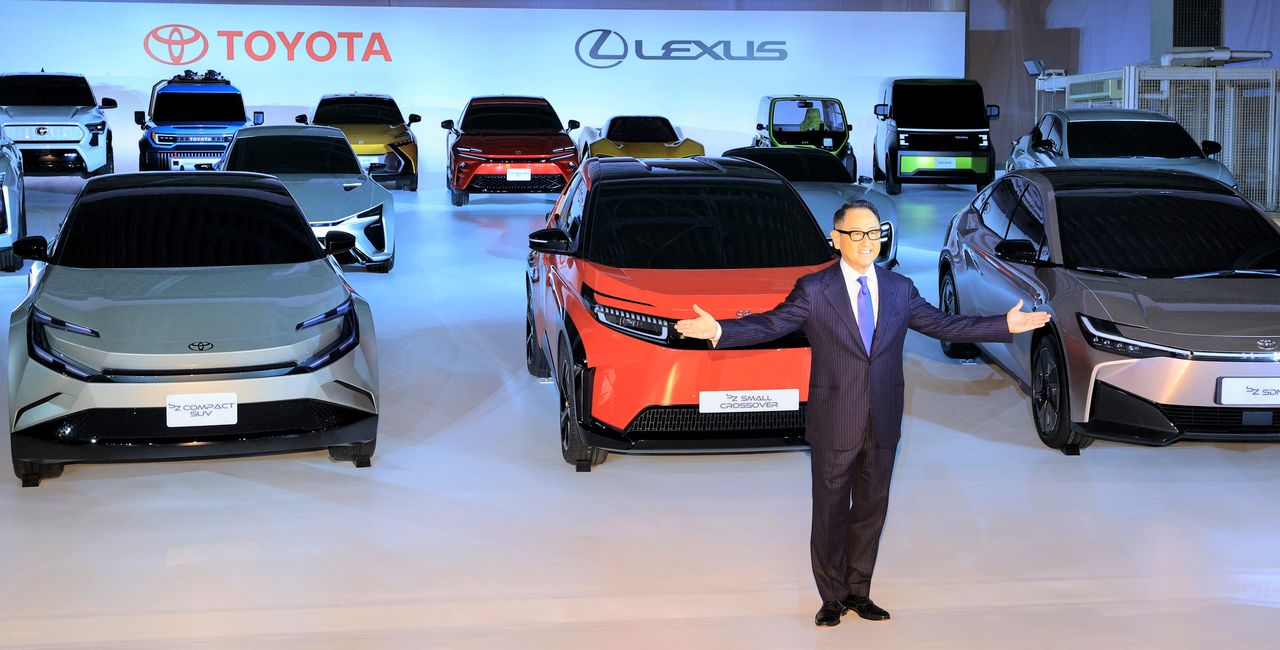 Toyota chose to respond on the track. With the catch phrase “Choose Carbon Neutral,” it participated in the Super Taikyū Series races in Japan with a Corolla equipped with a hydrogen engine. At the beginning of the 2021 race, Toyota was the only competitor with that type of vehicle, but in 2022, Toyota announced that it would team up with Subaru to develop carbon-neutral fuels. This activity has spread to other manufacturers, and Mazda, Nissan, Honda, and others are currently promoting the development of carbon-neutral fuels through motorsports. Change is in the air.

The essence of “the creation of ever better cars” that President Toyoda always talks about has the passion of a creator saying things like, “This is good, isn’t it?” and “I want this person to ride this car!”, but he has the thoughts of someone who wants to make things that you can feel through cars. Recently, this includes stock epithets such as “starting with motorsports.” He wants people in the field of motorsports to make use of obvious items such as the “speed of the time axis”, “solutions on the spot”, and “directly linked to results” in their daily work. 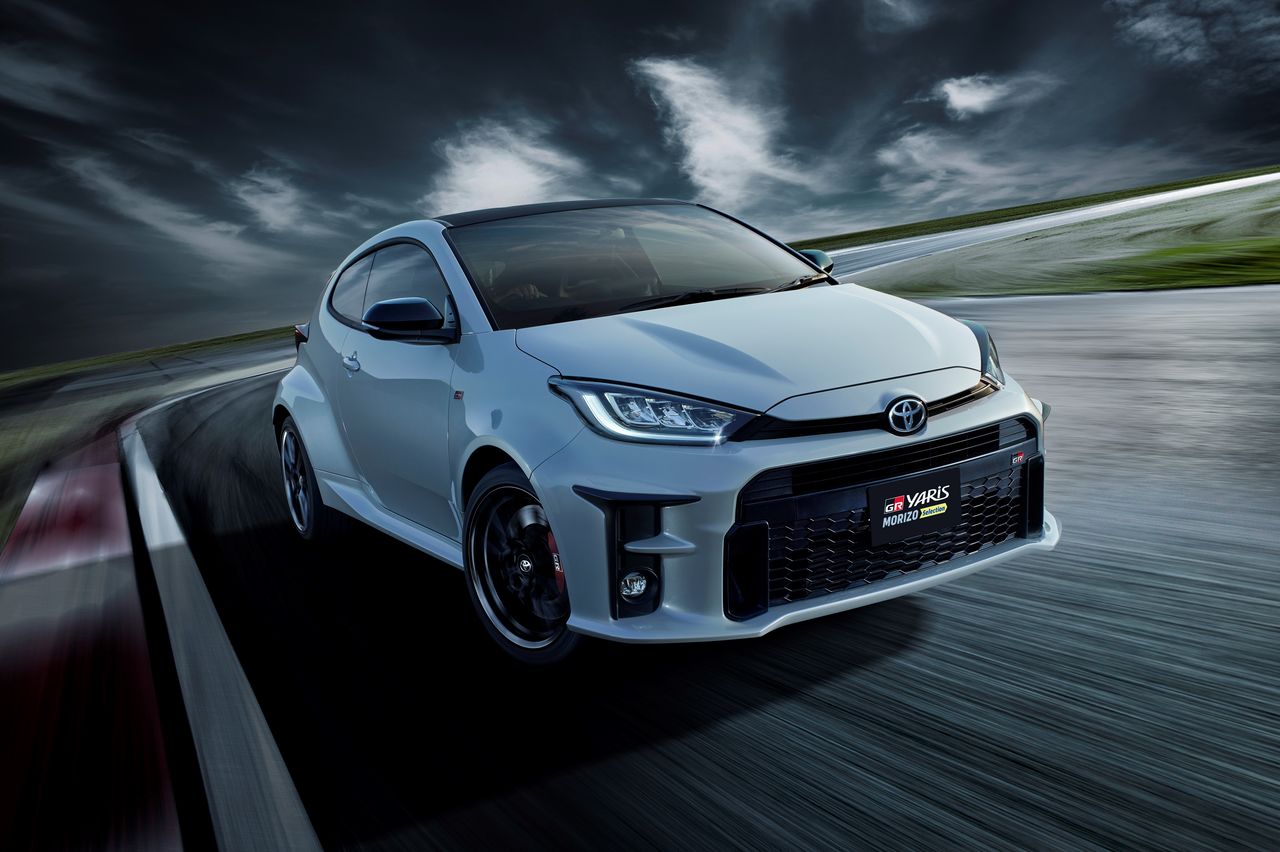 What is the driving force behind President Toyoda’s swift action?

“It’s because I love motorsports,” he says. “Otherwise I wouldn’t have been doing it for this long. When I became president, I said, ‘I want to be a leader who’s close to the workplace.’ It’s a tradition of the Toyoda family to come to the job site and talk cars. What is that site? It’s where the technology is—where the facts are, even if there are no conclusions yet. As long as we are an automaker, we are only going to achieve progress when top management pursues it with passion.”

His answer—and his passion—are both crystal clear. 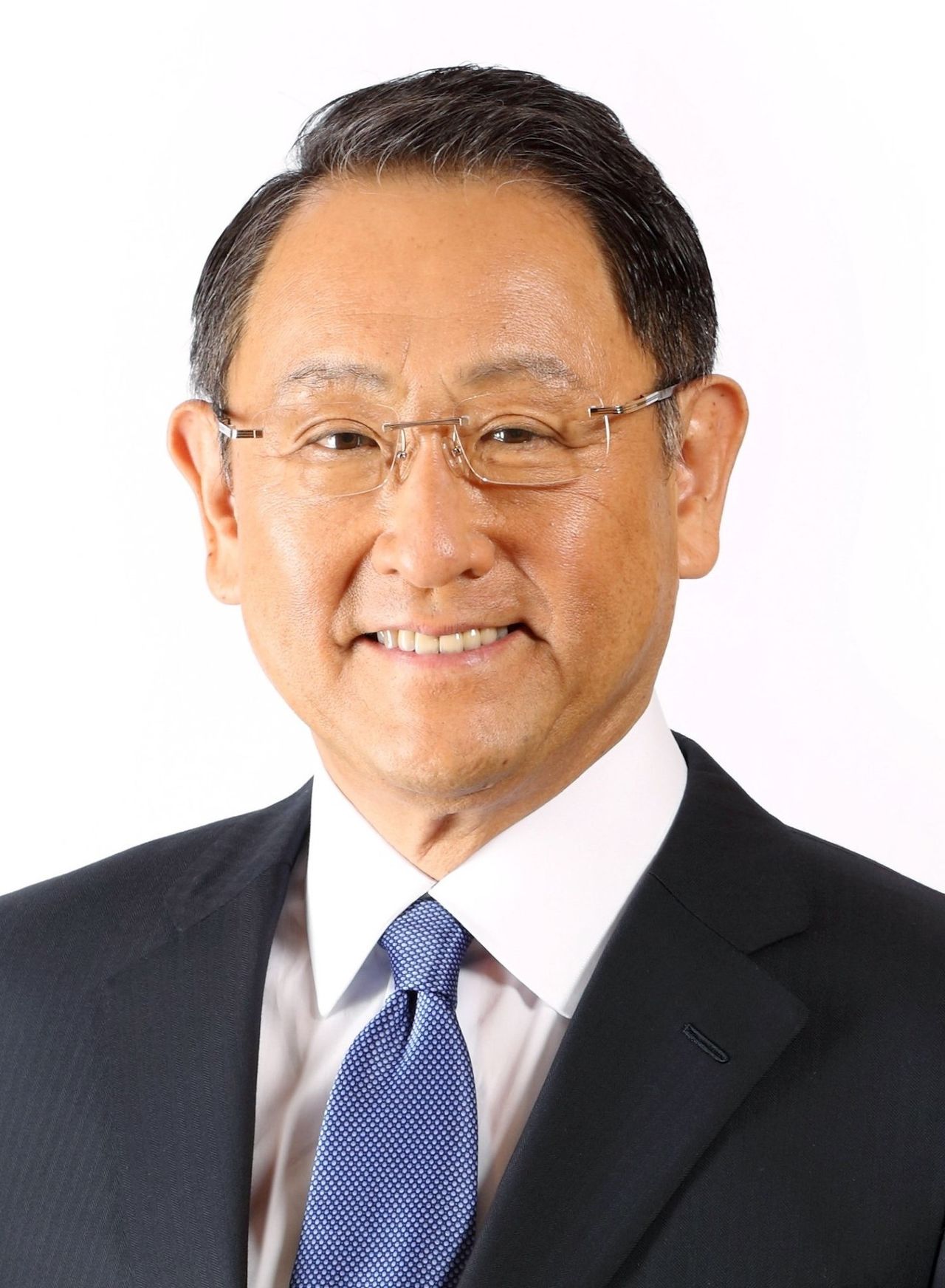 Born in 1956. Graduated from Keio University before earning his MBA from Babson College in Massachusetts. Joined Toyota Motor Corporation in 1984. After serving in roles including general manager of the Asia Headquarters, general manager and executive vice president of the China Headquarters, he assumed the position of president and CEO in June 2009. He is the eldest son of Honorary Chairman Toyoda Shōichirō and the grandson of founder Toyoda Kiichirō. He belonged to his university field hockey club, and was selected to represent Japan on the national squad. (Photo courtesy Toyota Motor/Jiji.)

(Originally published in Japanese. Banner photo: The GR Yaris, which is active in the highest level of rally racing, the WRC. Toyota has produced drivers’ champions for three consecutive years since 2019. Courtesy of Toyota Motor.)