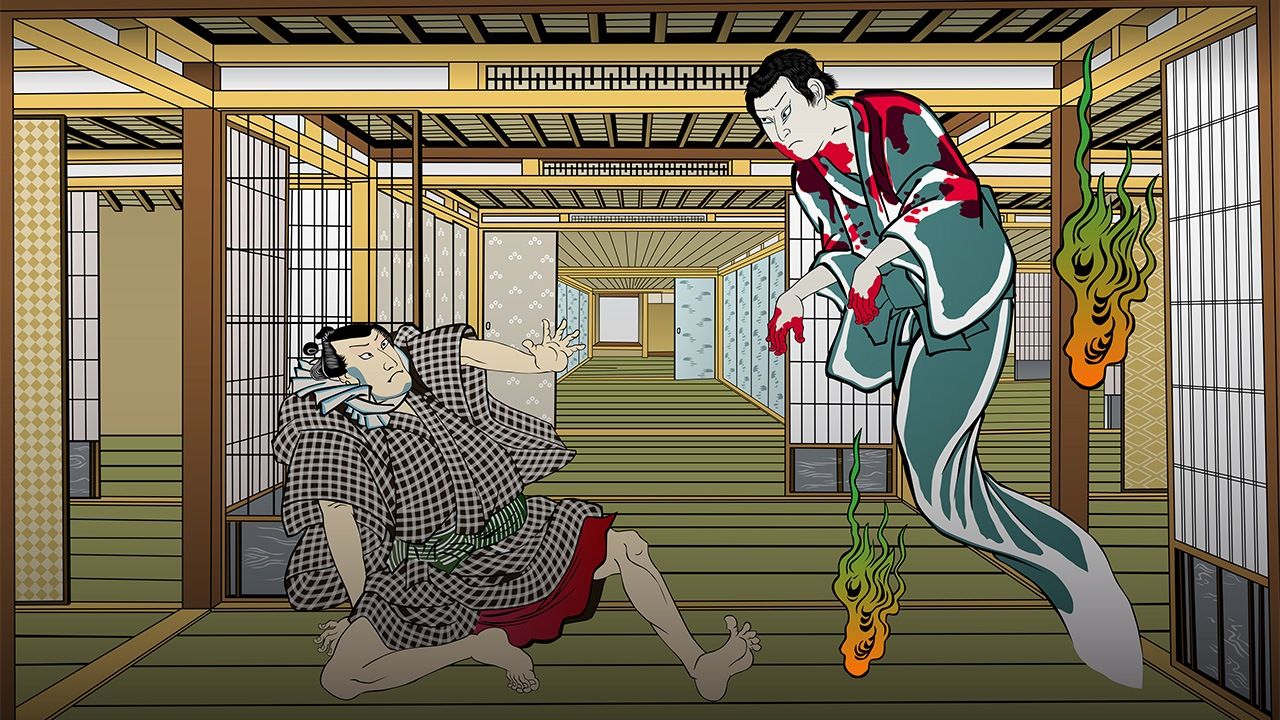 Fear and Reverence: Japanese Views of Souls, Spirits, and Ghosts

Culture Society History Lifestyle Aug 30, 2022
Religious historian Koyama Satoko traces the changing views through Japanese history of the soul and its connection to the body, as well as attitudes to malicious spirits and vengeful ghosts. 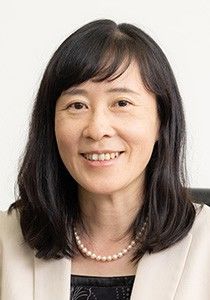 Professor of literature at Nishōgakusha University. Born in 1976. Specializes in Japanese religious history. Completed her doctorate in history and anthropology at Tsukuba University in 2003. Works include Ōjōgiwa no Nihonshi: Hito wa ika ni shi o mukaete kita no ka (A Japanese History of Dying Moments: How Have People Faced Death?) and Mononoke no Nihonshi: Shiryō, yūrei, yōkai no 1000 nen (A Japanese History of Mononoke: A Millennium of Spirits, Ghosts, and Yōkai). Coauthor of Yūrei no rekishi bunkagaku (The History and Culture of Ghosts).

The Japanese word yūrei conjures up an image today of a spiteful ghost, but its meaning has changed considerably over the centuries. Yūrei have only been considered frightening since the early modern era. In ancient and medieval Japan, when there was considerable “commerce” between the people of this world and spirits, the word yūrei typically referred to the souls of the dead, who neither showed themselves nor enacted curses.

The word is commonly said to have been an invention of the nō drama pioneer Zeami (1363–1443). However, the religious historian Koyama Satoko says that it has earlier origins. “While it was Zeami who created the idea of a yūrei visible to the living, the word first appears in writing in 747 in a prayer by a disciple of the Buddhist priest Genbō, imploring that he attain Buddhahood.

Genbō was a learned priest who had traveled to Tang China. Although deeply trusted by Emperor Shōmu, he lost influence with the rise to power of Fujiwara no Nakamaro. In 745, he was exiled to Kyūshū, and he died the following year. A Tang disciple who learned from him in China and followed him when he returned to Japan copied out the 600 volumes of the Daihannyakyō (Great Wisdom Sutra) to mark the first anniversary of Genbō’s death, as part of a prayer in which he described Genbō’s soul as a yūrei.

Through the medieval period, yūrei was used to refer to souls, or sometimes the departed in general. In whichever case, they were unable to curse people, and the word frequently appeared in the context of memorial services. They were differentiated from malicious spirits like mononoke.

Koyama says that in ancient Japan, as in China, people were thought of as being composed of a physical body and a soul. The soul regularly detached itself from the body before returning, but if it could not come back, that meant the person was dead.

“When the soul was floating free, it was called a hitodama, and it was imagined as being round with a tail, like a tadpole,” Koyama notes. “Yin-yang masters performed rituals invoking the dead to bring the soul back to the body. Ancient spirits were also seen as having powers that humans did not have, and as being almost kami or gods. Ancestral spirits were really believed to be protecting their descendants.” 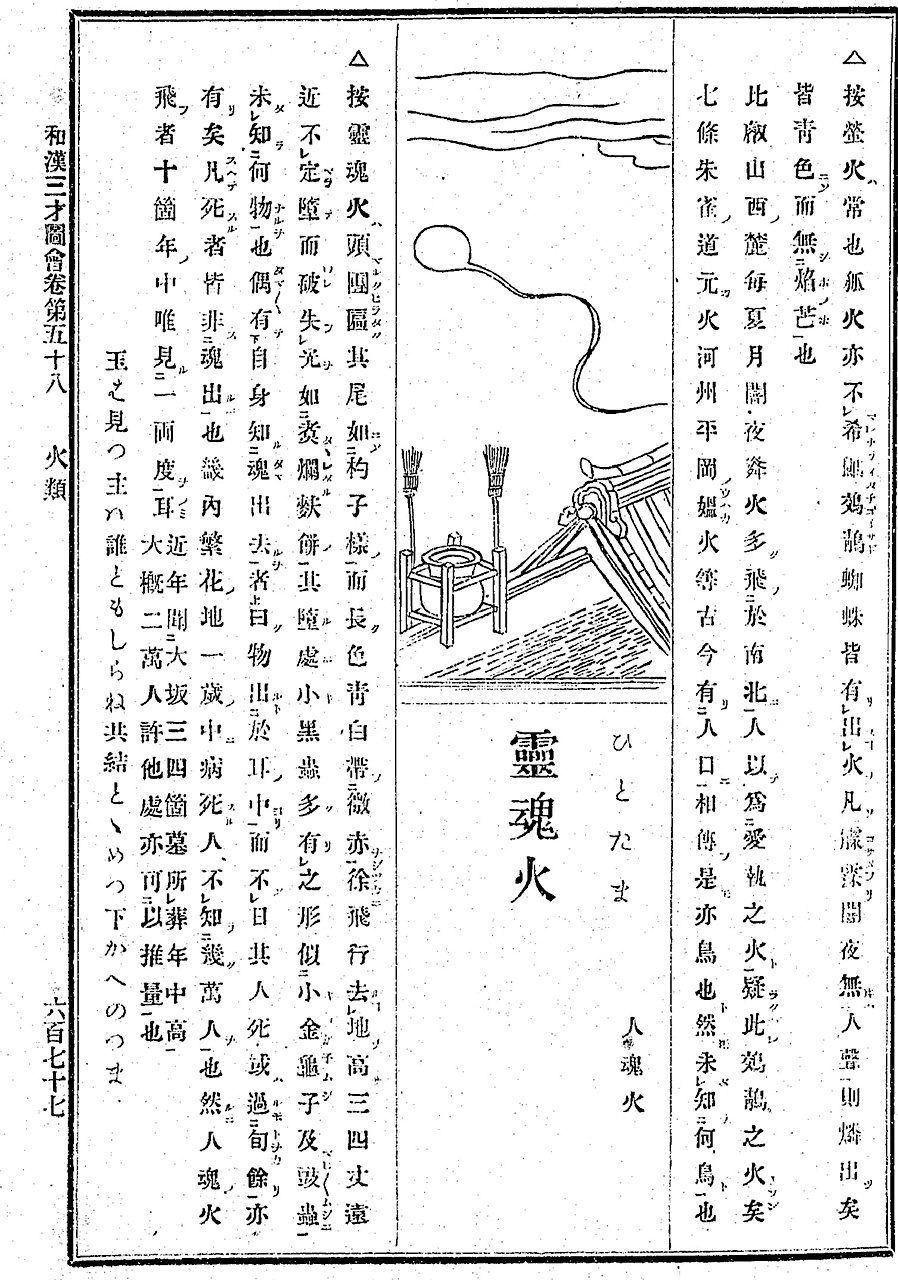 A hitodama illustrated in the 1715 encyclopedia Wakan sansai zue (Japanese-Chinese Illustrated Assemblage of the Three Components of the Universe). (Courtesy the National Diet Library)

Once the soul had parted, people did not attach much value to the “shell” of the corpse or remains. “The bodies of commoners were simply exposed to the elements, while aristocrats and priests were often cremated,” Koyama says. “Noble families had graveyards, but they did not visit them and make offerings. Even Fujiwara no Michinaga [966–1028], the most powerful man of his age, did not have a named grave, and the graves of the Fujiwaras were not properly maintained. While people had great respect for ancestors, by today’s standards they showed little interest in their bones.

“When souls could not return to their bodies, they might be fortunate enough to be reborn in the Pure Land, but delusions or earthly attachments that persisted at the time of death could lead to them wandering the world and causing harm. Spirits thought to cause plague, natural disaster, or other such large-scale calamities were feared as onryō, and people tried to console and pacify them. Famous examples include Sugawara no Michizane and Taira no Masakado, who died untimely deaths.”

Koyama explains that the word mononoke emerged around the middle of the tenth century to mean either spirits of the dead whose identity is unknown, or the sense of their presence.

Souls that cannot move on after death become mononoke, approaching people they feel resentment toward, and making them sick or even killing them. While onryō may cause great harm to society as a whole, the victims of mononoke tend to be individuals or their relatives.

In the tenth century, when aristocrats were ill, yin-yang masters, doctors, and priests would cooperate to cure them. First, the yin-yang masters would use divination to ascertain the cause of the illness, which determined the treatment method.

“If the cause was a mononoke, a priest would pray using, for example, mudras [hand gestures] and mantras to harness supernatural powers to reveal the spirit’s identity and drive it out by getting it to possess a medium called a yorimashi. If the spirit then spoke through the yorimashi, asking to pass to the next life, people might believe its words and hold a memorial service. However, there was also the risk of it being deceitful and killing the invalid instead. People would bargain with the spirit via the medium. Often the spirit was made to reveal its true identity and yield in a form of exorcism, and if all went well, the sickness was cured.”

A classic detailed description of an exorcism in literature comes in The Tale of Genji. The mononoke that torments Genji’s wife Murasaki is the spirit of Lady Rokujō, a lover of his youth. She tells Genji that her attachment to him is such that she cannot move on from this world, and urges him to hold a memorial service for her as the exorcism is painful. However, Genji shows no sympathy, increasing the scale of the exorcism, and attempting to torture her into leaving his wife’s body.

“If the mononoke was revealed to be a spirit or kami worthy of reverence, then its demands would be met, and it would be prayed to and memorialized. If not, the exorcism process would continue.”

Koyama points out an unusual feature that developed in Japanese exorcisms. “Chinese exorcisms were essentially based on Taoist techniques, while Japanese ones used a form of Buddhist magic called jujutsu. As Buddhism came to Japan via China, naturally it was influenced by Chinese thought. It’s interesting, though, that from the twelfth century, games like go, sugoroku, and shōgi came to be used in the exorcism of mononoke. These games also come from China, but as far as I know, they were never used there in exorcisms.” She adds, “The sound of go stones or dice striking against the board may have been thought of as effective in banishing spirits from the body.”

Go and sugoroku had originally been applied to divining and ceremonies, but there are also various historical documents showing that they were used to heal disease and in exorcisms. For example, there is a description of how the retired Emperor Go-Shirakawa played the board game sugoroku through the night to cure his illness caused by mononoke. In the thirteenth century, a book of court practices and ceremonies describes a yorimashi using a go board.

As the association between bodily remains and the soul gradually deepened, the spirit came to be seen as located in the grave. From around the first half of the twelfth century, people began to visit graves and make offerings. By early modern times, the belief that the dead resided in graves was common.

Around the fifteenth century, the word yūrei began to shift from describing the souls of the memorialized dead to represent spirits harboring a grudge. “The nō play Funa-Benkei [Benkei on the Boat] features a resentful yūrei,” Koyama says. “The ghost of Taira no Tomomori, who drowned at the Battle of Dannoura, names himself as a yūrei, and wields his sword, vowing to force Yoshitsune beneath the waves.”

As different meanings of yūrei were found alongside similar words like mononoke, onryō, and akuryō, over time it became more difficult to differentiate among their precise meanings.

In the Edo period (1603–1868), there was a belief that a bad relationship with someone in life could lead to that person taking revenge after death. Yūrei bearing grudges became more common and were confused with mononoke.

Despite the fear of ghosts, people in the Edo period were more skeptical about the existence of spirits. Perhaps the relative peace of this time led to a desire for excitement among the public, as there was a craze for kaidan (ghost stories) and many artists painted pictures of yūrei. Again, yūrei and mononoke became mixed up with words like yōkai and obake.

As people discussed how to deal with ghosts too, there was one anecdote in which Matsuo Bashō was able to get a spirit to pass on to the next world by composing a poem. 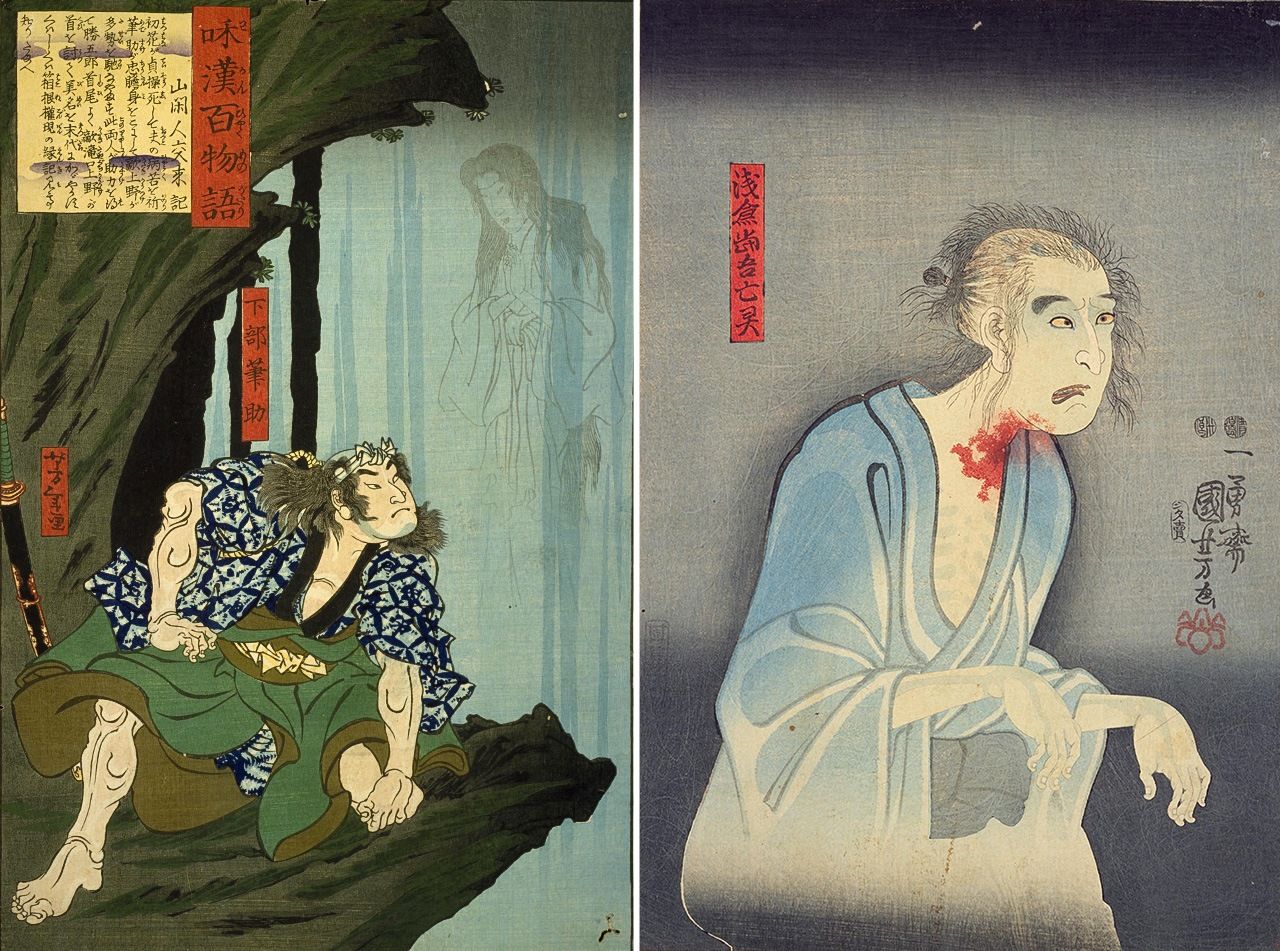 In the later Edo period, it was common for yūrei to appear in kabuki, providing inspiration for ukiyo-e artists. At left is Shimobe Fudesuke (The Servant Fudesuke) from Tsukioka Yoshitoshi’s Wakan hyaku monogatari (One Hundred Tales from Japan and China) series, while at right is Utagawa Kuniyoshi’s Asakura Tōgo bōrei no zu (The Ghost of Asakura Tōgo). (Courtesy the National Diet Library)

Changing Views of the Soul

Some years ago at Nishōgakusha University, researchers from fields including history, media studies, literature, and religion got together to conduct joint research on the soul. Koyama was one of the core members.

“The soul is an important topic for considering Japanese spiritual history,” she says. “Japanese research has formerly focused mainly on economic and political history. Research into ghosts and the soul has also been centered on Edo-period literature. Examining how the soul is described in records in the context of religious history is a fresh viewpoint.”

As in the Edo period, the enjoyment of fear as a leisure pastime can also be seen today.

“Without believing in spirits, people still hold memorial services, visit graves, and ask for help and protection,” Koyama comments. “Many Japanese believe somewhere that spirits have special powers. In that sense, one might say that there is still commerce with the dead.

“Still, there’s a growing feeling that grave visits aren’t necessary and that the grave isn’t where the spirit resides. There’s less resistance now to tree burials, scattering ashes, and other such practices, and a turn to acceptance of the idea of returning one’s remains to nature after death. In the sense that the spirit is seen as being not in the grave, but some other place, and the reduced association between it and the body, we may be approaching the ancient way of thinking, in which the remains weren’t considered to be important. Today, we’re in a transitional period in our view of the soul. I think that the pandemic has added to this tendency.”

The joint research has also opened up new facets beyond the historical. “For example, contemporary ghosts are finding new ways of haunting,” Koyama notes. “In Ring, Sadako’s curse lurks in a videotape, but we live in the digital age now. Ghosts in horror films manifest themselves in social media. They may appear on Zoom, zashiki warashi [child spirits] might be found on Line, and dead people could write messages on Facebook or Twitter.”