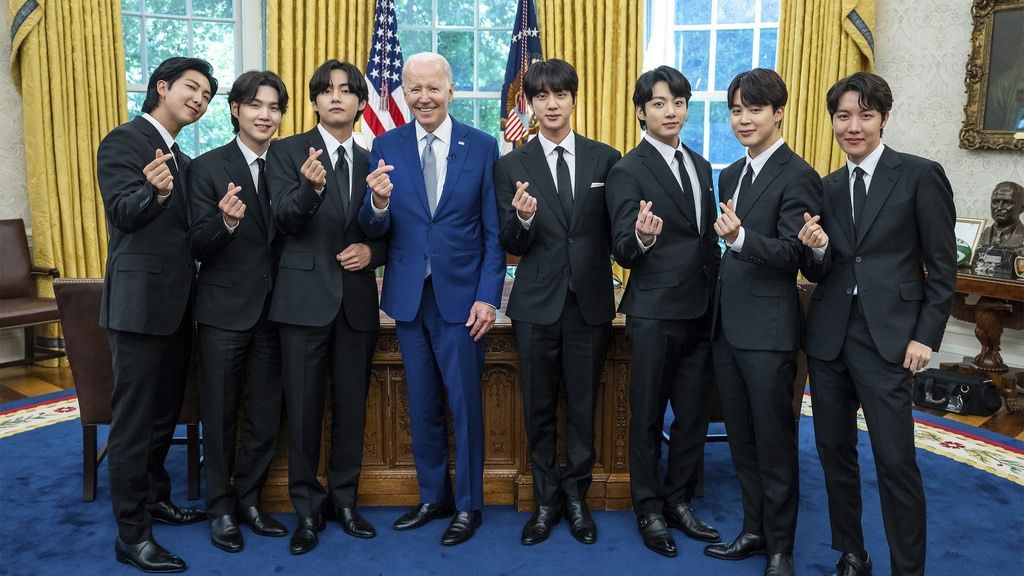 Entertainment Sep 27, 2022
Asian artists and performers are enjoying higher profiles in the US entertainment world. One-hit wonders like Korea’s Psy (“Gangnam Style”) and Japan’s Pikotarō (“PPAP”) are giving way to acts like the K-pop megastars of BTS. A look at what it takes for Asian entertainers to make it to the top of the world’s biggest entertainment market.

From K-pop Stars to Global Phenomenon

In June 2022, the South Korean musical group BTS announced that its members would focus on their solo projects for the foreseeable future. For fans of the K-pop megastars, this was crushing news, amounting to an effective suspension of the band’s activities.

BTS has in recent years become one of the biggest acts of Asian origin ever in the US entertainment world. Several of the band’s songs and collaborations have made it to the number-one spot on the Billboard Hot 100, with their megahit “Dynamite” debuting in the top position in August 2020, the first time for an Asian act to occupy the summit since Japanese singer Sakamoto Kyū’s 1963 “Sukiyaki.” The band has also racked up a steady stream of industry honors, including the 2021 Artist of the Year prize at the American Music Awards. In late May 2022, the band’s seven members visited US President Joe Biden at the White House to discuss hate crimes and discrimination against Asian people in the United States.

Indeed, this group has gone beyond being merely popular musical artists. As their fame and influence have climbed, they have put these to use as representatives of Asia in addressing various societal issues. On the heels of their White House visit, many were expecting BTS to step even more fully into this role. This has made the sudden announcement that the group activities would be put on pause something that impacts the entire global entertainment industry, not just the Army, as their loyal fans term themselves.

Rising Stars from Across Asia

The American entertainment scene, in particular Hollywood, has seen considerable activity in recent years by Asian celebrities. Japanese actors like Watanabe Ken, Sanada Hiroyuki, and Kikuchi Rinko have made their mark in major US film productions. Watanabe and Kikuchi were in the spotlight once again this year for their roles in Tokyo Vice, a drama coproduced by Japan’s Wowow entertainment channel and the US streaming platform HBO Max.

Since early this century Asian faces have been decorating the big and small screen alike with more frequency. Stars like Lucy Liu, Sandra Oh, and Masi Oka have snagged major roles against a backdrop of a rising US population of Asian immigrants and second-generation citizens. Watanabe Ken made his first big Hollywood splash with his 2003 appearance in The Last Samurai; he extended this fame with additional key roles in Memoirs of a Geisha (2005), Letters from Iwo Jima (2006), and the US production of Godzilla (2014), as well as a musical outing in The King and I (2018). His performance chops have made him a top choice for Hollywood directors when they need a Japanese actor.

Hard to Reach the Very Top

It is clear from BTS’s stardom and Watanabe’s steady work in Hollywood that the door to American show business, once considered closed to Asian faces, is gradually opening wider. Not all goals of Asia’s performers have been reached, though. BTS, for instance, has garnered several nominations for Grammy Awards, but the band has yet to take home a golden gramophone. And while the group’s fame has undoubtedly raised the profile of K-pop as part of the global music scene, Korean acts other than BTS have yet to gain broad popularity among American listeners.

In short, it appears as though Asian performers have yet to make it to the “top of the top” in terms of recognition for their art at the very highest levels.

Do the hurdles in their way really remain high, though? I spoke with Miyake Yuriko, a Japanese stage actor based in New York about it. Miyake, who has experience in off-Broadway acting, says: “It’s a really wonderful thing to see an Asian group like BTS become this popular—to hear their songs playing all the time on mainstream channels here in America.”

Asian performers do enjoy some advantages, she acknowledges, speaking about her audition experience. “There are times when a director says ‘we really need an Asian for this role,’ and I’ve been in situations where this gave me a real edge against actors from different ethnic backgrounds, who must have been jealous about this!” At the same time, though, she notes, “You also get told blunt things like ‘we’ve already got enough Asians for this play’—often meaning they’ve got just one—and they go for someone from a different background instead.”

Actors, says Miyake, like to tell themselves that race doesn’t matter so long as they have the talent to take on a role. But the reality of the casting call is often different. This has been made crystal-clear to her on more than one occasion. “At one audition some years back, we all got split into groups to make it easier for judges to see what we could do. But all of us Asians were lumped together in one group. When it was our turn to take the stage and show our dance moves, the judges were very clearly uninterested in what we had to offer. That was disillusioning.” 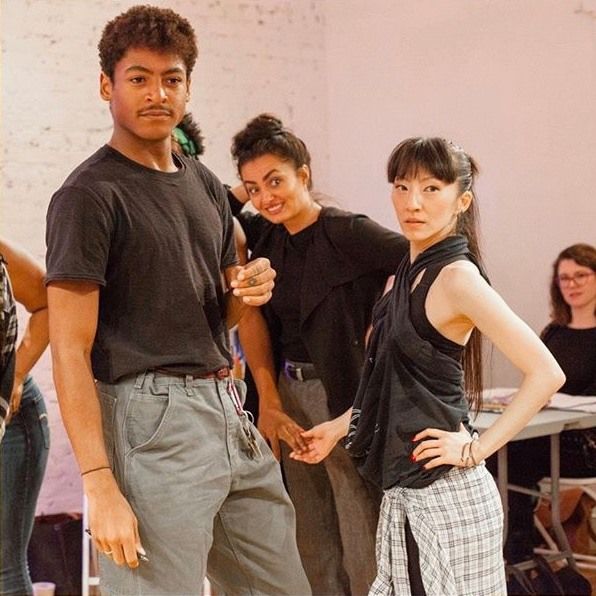 Miyake Yuriko, at right, rehearsing for an off-Broadway performance. (Courtesy of Miyake Yuriko)

Ken Kensei, a Japan-born actor active in Hollywood who has worked alongside Takakura Ken in Black Rain (1989) and Watanabe Ken in Letters from Iwo Jima, has this to say about the audition experience for Asian actors.

“Frankly speaking, the only time we can get a foot in the door is when they want an Asian face in the role from the beginning. In Letters, we had a lot of Japanese actors landing roles, but this was a very rare case. Nowadays diversity is of course trotted out as an important concept, and people talk about the need for balanced ethnic representation in films and music, but unless there’s a particular reason we’re needed for something, there isn’t a lot of effort made to bring Asians onboard.”

Generally speaking, it seems that the barriers remain high to Asian performers. But, as Kensei also says, “when directors do need Asian actors for their roles, it’s a golden chance for us.” Hollywood is not without hope for rising actors from an Asian ethnic background.

Making It Big in America

Miyake, for her part, defines one condition that Japanese and other Asian performers must meet to succeed in US show business: “You have to communicate fluently in English. It’s also important for people in the industry to show some interest in who you are and what you have to offer,” adding that thanks to the emergence of huge stars like BTS, “it is indeed getting easier for entertainers from Asia to carve out spots for themselves.”

Why have Korean stars made such remarkable progress? Says Miyake, “One big difference with Japan is the way that South Korea supports its entertainers. Entire industries spend long years training performers to the peak of their abilities; there’s no faking it at that point. These artists are polishing their craft from a young age. They dedicate their lives to elevating their art, and when the time comes, they’re ready to take that next step from Asia to the entire world stage.”

What, then, is the situation in Japan? “There’s a much stronger focus on ‘idol culture,’” Miyake notes. “Idols who are young and pretty can succeed in Japan, but they’re never going to make it in a market like the United States, with its focus on real talent. That said, Japan is home to some artists who can perform on a par with anyone in the world. If we want more Japanese performers to make their way onto the world age, having them work together with globally proven art forms like manga and anime might be one way forward.”

Ken Kensei, meanwhile, has this advice. “If Japanese performers want to maximize their chances, they need to have skill, impact, and English language ability. Take the dancer Ebina Ken’ichi, for instance. He had skill and impact on his side. When he won season eight of America’s Got Talent with his “head-dropping” performance, the skills he showed were those that other Japanese dancers might also have in their repertories. But they hadn’t been seen on American TV before, and the impact he had was off the charts. Dance doesn’t require speaking in English, so it’s another avenue for Japanese who want to prove themselves in the United States.” 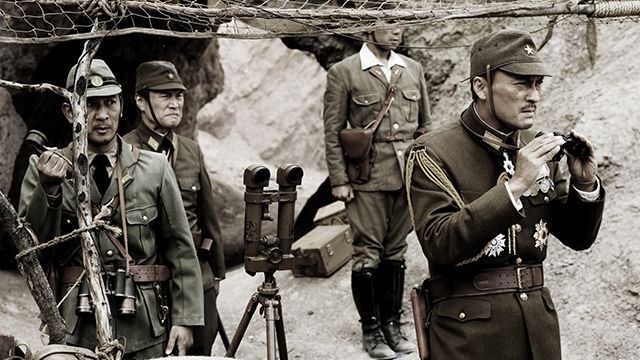 Ken Kensei, second from left, in a scene from Letters from Iwo Jima. Watanabe Ken is at right. (Courtesy of Ken Kensei)

In 2013, the day after Ebina won the America’s Got Talent championship, I interviewed him in New York. He was a famous man at this point, thanks to his appearance on this nationally popular program, and a steady stream of fans approached him outside the venue, asking for autographs and taking photos with him. This surprised me. When I asked him what it took to make it to the top in America, this is what he had to say.

“In this industry, you only have two options: to be the best at something, or to be the only one doing it. If you’ve got some originality—some skill that’s all your own—then you have a way to really put on a show for people. You won’t have any competition.”

Show business in the United States might still be a hard mountain to climb, but Asian performers are proving that they can reach the summit. Even Japanese performers can rely on outstanding artistic skills, English language ability, or even visual impact to make their way in this challenging entertainment world.

(Originally written in Japanese. Banner photo: The members of BTS pose with President Joe Biden at the White House on May 31, 2022. © Adam Schultz/White House/Planet Pix; via Zuma Press Wire/Kyōdō Images.)