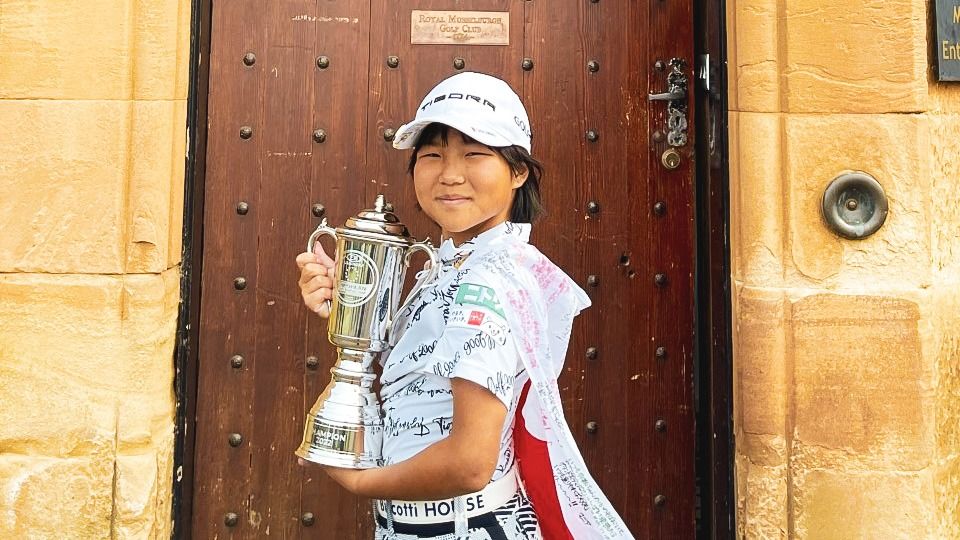 Sports Sep 21, 2022
Sutō Miroku, who turned 11 this August, is currently making waves in the golfing world. She won the US Kids Golf European Championship in June, becoming the first junior golfer to complete a Grand Slam. Sutō started playing at age one, and currently spends three to four days each week away from home, immersed in practice. We found out more about this extraordinary rising star and her family.

Sutō Miroku made history when she competed in the US Kids Golf European Championship, held at the Royal Musselburgh Golf Club, a historic setting established in the 1700s. In the 10-year-old girls’ division, she played 54 holes over three days, finishing 14 shots ahead of second place. She became the first player to conquer the four major competitions in the junior golf world, after her victories in the 2017 and 2018 World Junior Championships, the 2019 Malaysia World Championship, and the 2021 Kids World Championship.

With a beaming smile, Miroku explains: “I started golf when I was one and a half, and practiced with the aim of winning the four big titles. I’m honored to be the first player in junior golf to achieve this.”

But her ambitions are not limited to junior competition. She boldly describes her future goals: to win the gold medal at the 2032 Brisbane Olympics and to become the world’s most famous golfer.

If one word can describe Miroku and her family, it is “extraordinary.” She not only does what no one before has ever done—she is the epitome of bold.

Since first picking up a golf club at that tender age, Miroku has continued refining her skills under the close guidance of her father Ken’ichi, a former University of Tokyo professor and Buddhist scholar. She began appearing on variety television programs around the time of her wins in the 2017 and 2018 World Juniors, and gained overnight celebrity for her catchphrase of “I’m number one!”

The educational philosophy of the Sutō family is unique: they do not focus so heavily on school attendance. Miroku is enrolled at a public elementary school in her hometown of Ōta, Gunma Prefecture, but she only goes there for half the week. The rest of the week she spends golfing while staying at the family’s second home in Hitachiōmiya, Ibaraki, near her training base, the Golf 5 Country Sunny Field golf course.

As Ken’ichi states, “It is a parent’s role to consider together with their children the best ways to help them develop their unique traits and strengths. Naturally, this is based on the assumption that the kids themselves want this. With Miroku, this means golf. She practices six to ten hours each day in Ibaraki, and I provide her schooling. Even without attending many classes, she gets good marks.”

The Sutō family’s educational philosophy also applies with their sons, Momotarō and Monju. When Miroku played in Scotland in June, her two brothers took time off from school to cheer her on in person. The family of five, including mother Miyuki, traveled together around Britain. After Miroku’s training and tournament in Scotland, they visited London, where they spent a whole day at the British Museum.

Miroku describes her impressions of the museum: “There were so many mummies, it was amazing! I was surprised that the female mummies had breasts.” She also says that her father pointed out that, although the museum is indeed wonderful, many objects on display were brought to Britain from former colonies, and some people describe it as a museum of stolen goods. He also explained to her the positive side, namely that it has enabled careful preservation and research of many ancient treasures. Guidance like this has helped her understand that “the world is complicated.”

With her children’s best interests at heart, Miyuki says: “We develop our senses by seeing things with our own eyes and experiencing them. I believe that we learn many things more deeply from actual objects rather than from textbooks.”

Ken’ichi, who has no experience in competitive golf, says he read over 1,000 golf manuals to find appropriate techniques to teach Miroku. But he does not rely entirely on his own abilities, and has employed other coaches to help train her. Among the many people who have taught Miroku, the man that she and her family call “Coach” today is Yokomine Yoshirō. 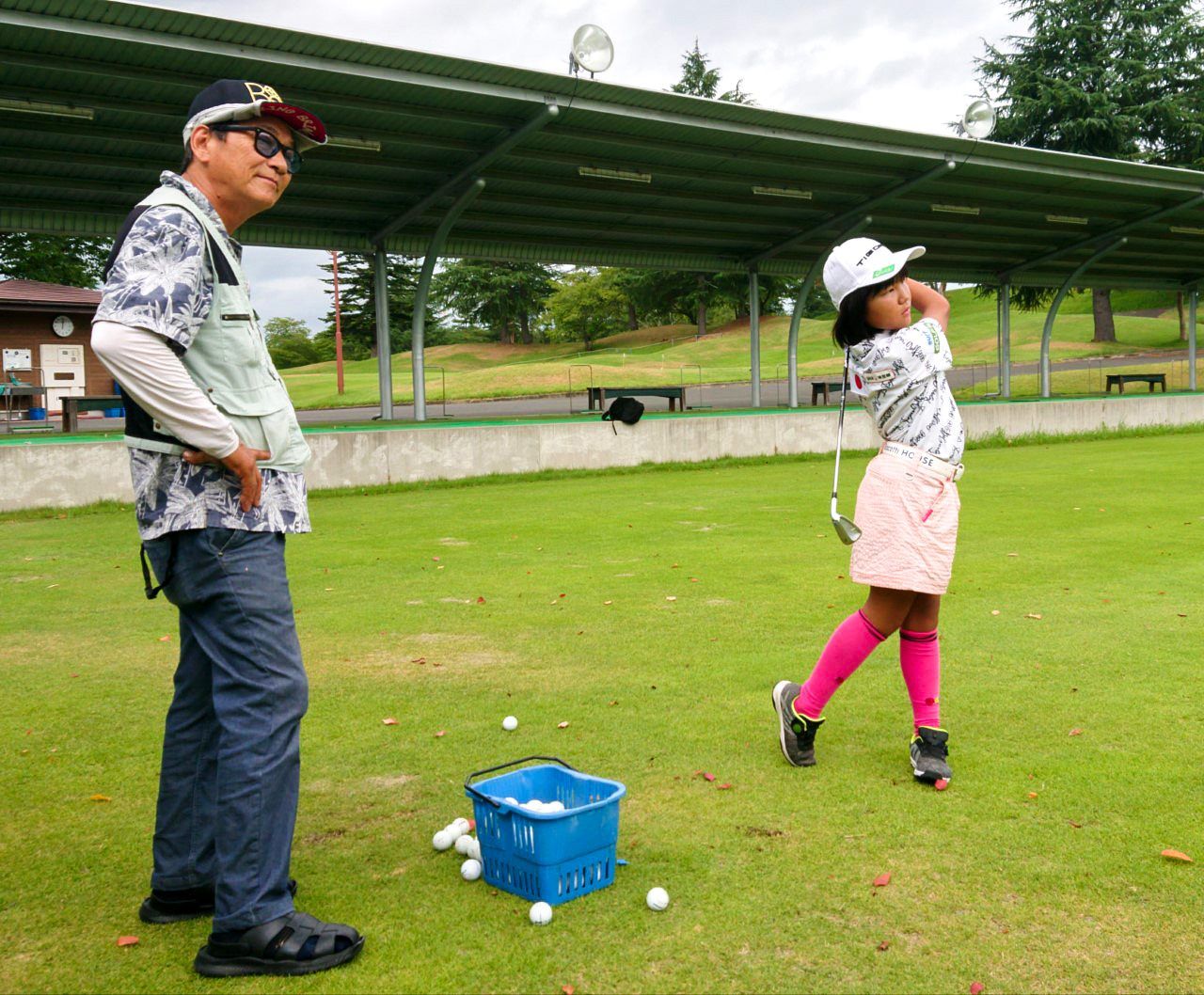 Yokomine, father and former coach of 23-time Japan women’s champion Yokomine Sakura, began training Miroku in August 2022. In addition to Sakura, Yoshirō has also coached others in their childhood, including his eldest daughter Rui, as well as champion golfers including Kōzuma Jin’ichirō, Ikemura Tomoyo, Izumida Daijirō, and Kōzuma Kotono. “Looking back, I was enjoying my life the most when Sakura was Miroku’s age. I’m delighted to once more set my sights on professional golf together with Miroku. She’s incredibly talented.” He is full of conviction when he says, “I hope to help her develop into an even greater golfer than Sakura.” Miroku is also positive about training with him. “I’m excited to see how much I can grow under Coach Yoshirō.”

US pro golfer Grant Godfrey has been employed as her short game coach. Ken’ichi explains another benefit of Godfrey’s coaching: “By speaking with Grant, she’s also getting lessons in spoken English.”

She has an exceptional training environment. The family home in Ōta even has a lawn 50 yards long where she can practice her approach shots. In the house, they have a 10-meter artificial putting green, and in the garage, they have installed the latest golf simulation equipment that can measure distance, spin, and initial ball speed. In Hitachiōmiya, meanwhile, Miroku’s training is centered on playing rounds at Golf 5 Country Sunny Field. 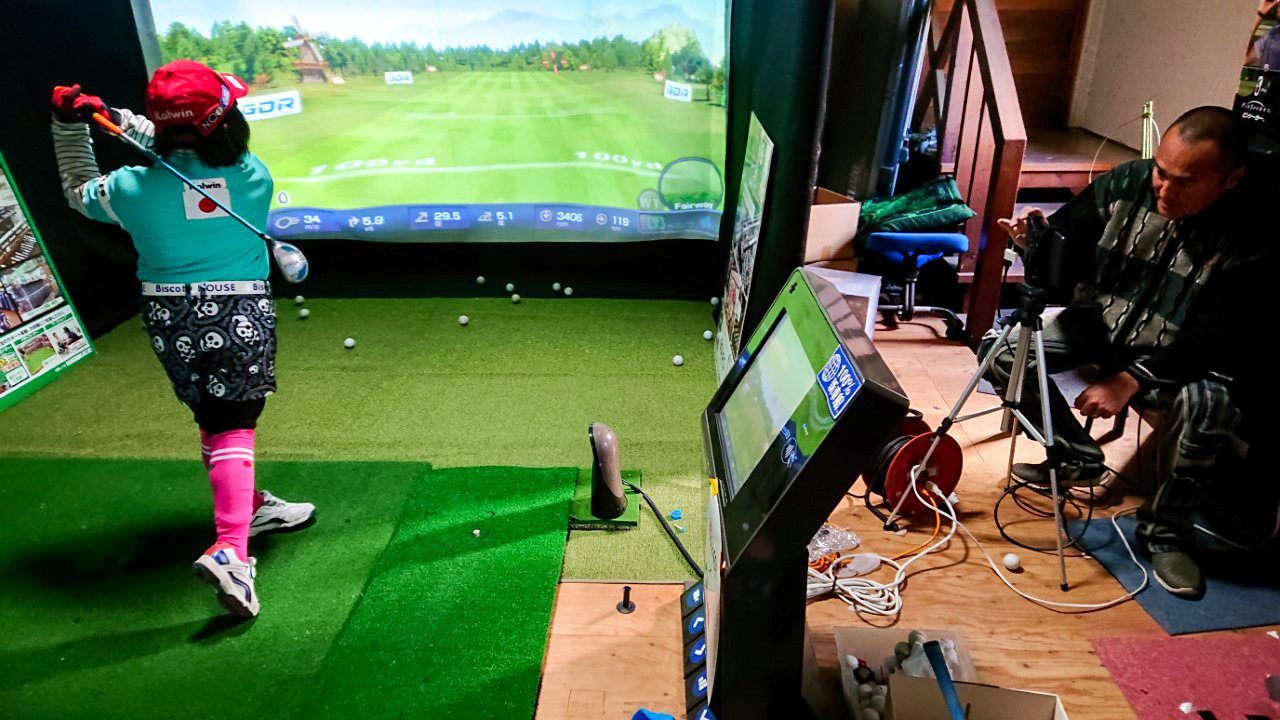 Sutō Miroku trains with her father Ken’ichi in the family garage using a simulator that can measure distance, spin, and ball speed.

Miroku and her family enjoyed a favorable tailwind this year in the young ace’s dream to become number one in the world. In January 2022, the rules for amateur status underwent major changes, with the lifting of sponsorship restrictions. It resulted in a rush of sponsorship offers for this promising young athlete. 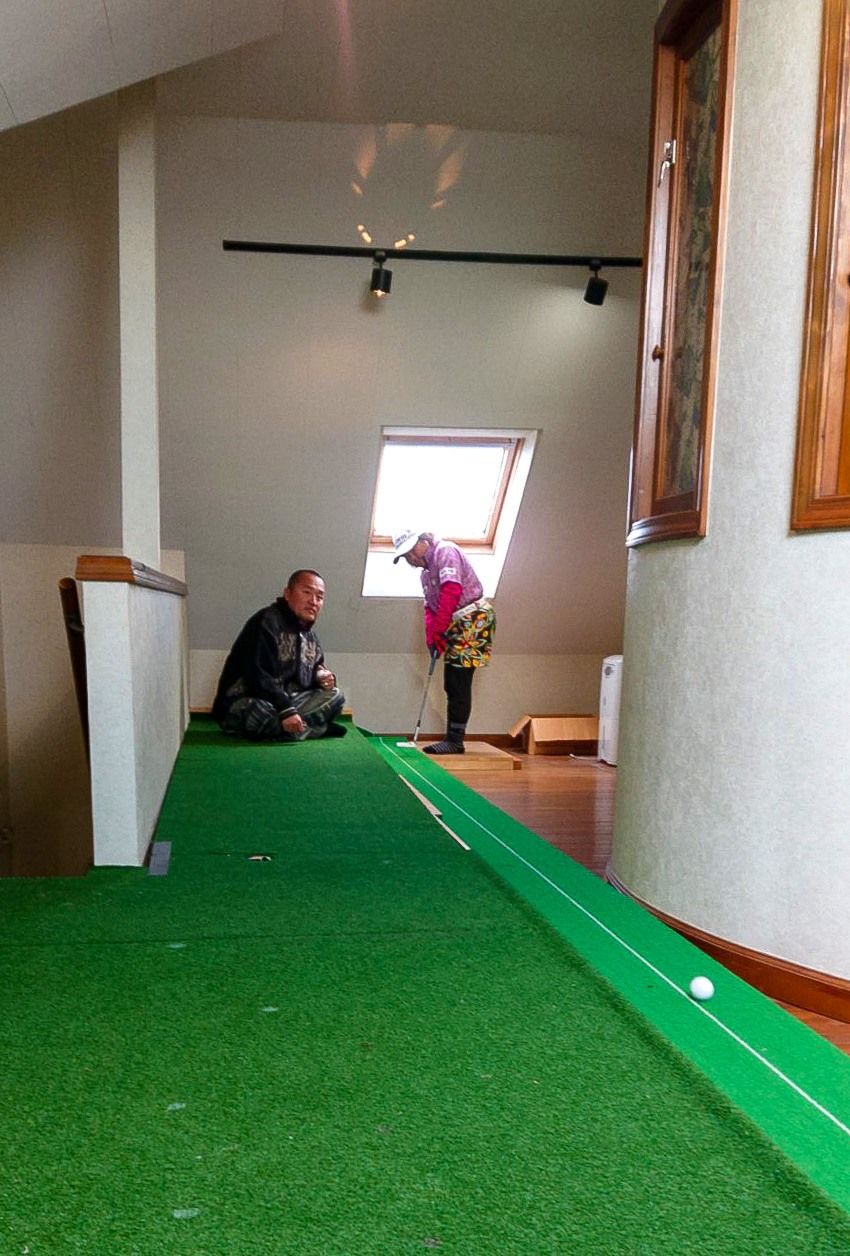 Sutō Miroku works on her putt together with her father at home.

After first signing an affiliation agreement with Golf 5, a major golfing goods retailer, she has been signed up by a succession of sponsors. Now, she has agreements with furniture giant Nitori, confectionery maker UHA Mikakutō, abacus school Ishido, car dealer 100% Shinshakan, Surf Beverage, home constructor Biscotti House, and Nitta Tire, a tire dealer from her hometown of Ōta. Her caddy bag is emblazoned with the Rakuten logo, while her cap features the logos of SMBC Nikkō Securities and Jukai, a welfare association.

Since July, she has a deal to wear socks from legwear manufacturer Captain Yū. Usually socks would be included in a complete sporting wear agreement, but Miroku has a separate agreement, with unprecedented conditions. Apparently, it is a massive 20-year agreement paying her ¥1 million per year. This should give her a steady footing until she becomes a veteran golfer.

At age 11, while still an amateur, she already has 12 sponsorship deals, on a par with a top-class professional player. Miroku takes this responsibility seriously, “I’m still in elementary school, so I don’t know about the agreement details or the money, but I will play my best for all those who are supporting me.”

The Words of Miura Kazuyoshi

As Miroku’s reputation has grown, she has also been the object of criticism. After gaining confidence from her masterful performance at the European tournament in June, she finished seventeenth at the World Juniors in July. After this unexpected failure, she was stunned at the thoughtless criticism she received. She spoke openly about her disappointment: “I felt down for just one day when I was unable to win while everyone had high hopes for me.”

But she was encouraged by the words of soccer player Miura Kazuyoshi, formerly on the national team and a man highly respected by Ken’ichi. “My father taught me something important with the words of Kazu-san. He said that it’s natural to be in the sporting paper headlines when you win, but only true champions make the headlines when they lose. This helped me to take criticism positively. I want to do my best to become a true athlete like Kazu-san in the future.”

Miroku has been described as a golfing prodigy, and also refers to herself in this way. But the reality is that she is a prodigy through her efforts. While training six to ten hours almost every day, she is adamant to be “the first in history” and “the first Japanese person” to achieve great things in her sport as she strives “for unprecedented records.” She is continuing in her efforts by turning not only praise and attention, but also criticism, into her driving force. It’s exciting to look forward to see how she meets the real tests ahead of her.