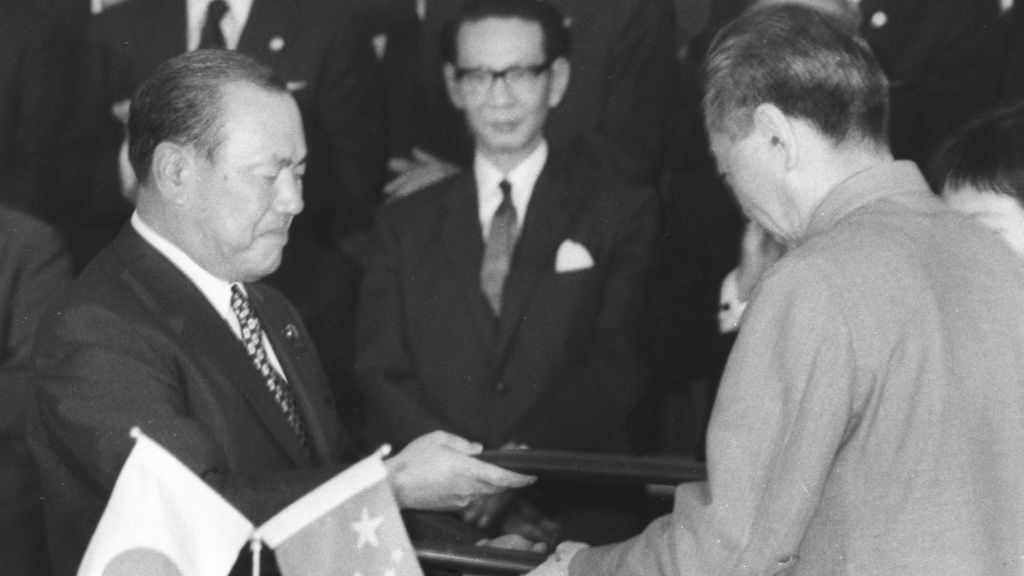 The Top Secret Document that Took Tanaka Kakuei to Beijing

Politics Sep 28, 2022
A top-secret document played a crucial role in compelling Prime Minister Tanaka Kakuei to visit Beijing only 85 days into his premiership to pursue the normalization of Sino-Japanese diplomatic relations. On the fiftieth anniversary of normalization, the following reflects on the behind-the-scenes negotiations that led to the official restoration of diplomatic relations between Japan and China.

In July 1972, three rounds of meetings took place at the Great Hall of the People in Beijing. These meetings, between Premier Zhou Enlai of the People’s Republic of China and Kōmeitō Chair Takeiri Yoshikatsu, set the stage for Sino-Japanese normalization 50 years ago. In 2002, I held a copy of a “top-secret” document—52 pages packed with detailed text detailing the proceedings of these meetings—that had lain dormant in the Ministry of Foreign Affairs for 30 years, out of public view.

I took the bundle of documents with me to former Japanese Ambassador to China Hashimoto Hiroshi. Hashimoto began serving as the director of the China Division in MOFA’s Asian Affairs Bureau at the end of the Satō Eisaku administration (1964–72) and remained in the position for a further six years after Tanaka Kakuei became Japan’s prime minister in 1972. He is the person most familiar with the behind-the-scenes bilateral negotiations during that critical period for Sino-Japanese relations.

Hashimoto began his recollections by recounting the day that he was called into Foreign Minister Ōhira Masayoshi’s office, where Ōhira directly handed him a document. “He told me to ‘look into it.’ It was a thick document with masterly written characters. Quickly reading over it, I became convinced that we could restore Sino-Japanese relations.”

Hashimoto’s words were straightforward and clear, indicating that he retained vivid memories of the negotiations he had devoted his heart and soul to.

“I remember that Foreign Minister Ōhira insisted upon complete secrecy, telling me not to tell even the administrative vice minister. The significance and sensitivity of the document was such that I immediately put it in a locked cabinet.”

At that time, most Liberal Democratic Party parliamentarians and MOFA officials were pro-Taiwan. Prime Minister Tanaka had, however, pledged to restore diplomatic relations between Japan and China during his run for prime minister, despite it seeming to be a remote possibility. However, in a sudden turn of events, negotiations between Japan and China were set in motion. This top-secret document would be the decisive factor in the prime minister deciding to visit Beijing later in the year.

“The Cabinet Would Be Blown Away”

I first learned of the existence of this top-secret document while interviewing Kōmeitō’s Takeiri himself about the restoration of Sino-Japanese diplomatic relations. During the interview, he handed me a copy and explained in detail the events leading up to Tanaka’s visit to China.

On the evening of July 23, two months before the official restoration of diplomatic relations, Takeiri secretly visited Prime Minister Tanaka’s residence in Mejiro. The two had a personal relationship. Takeiri was first elected to the House of Representatives in 1967 after serving as a Japan National Railways employee and representing Kōmeitō in the Tokyo Metropolitan Assembly. He had tirelessly worked his way through the ranks to the top and was a brusque politician who never compromised his principles. He and Tanaka likely had mutual affinity for each other because of these characteristics.

About one week earlier, Takeiri had been asked by the PRC government to visit Beijing. Takeiri had already visited China in the previous June to meet with Premier Zhou Enlai. He was confident that normalization of Sino-Japanese relations would be on the agenda for his next visit.

After being ushered into the prime minister’s reception room, Takeiri quickly outlined his requirements to Tanaka.

“I am going to Beijing soon. I would appreciate it if you could write a note saying that you also have faith in this Takeiri person.”

Takeiri wanted the prime minister’s endorsement as a special envoy if he was going to talk about restoring diplomatic relations. Prime Minister Tanaka, however, immediately refused.

“If you want to go, then go. Do what you can with China. But I can’t write you a letter of introduction. It’s completely out of the question. I just became prime minister. My cabinet would be completely blown away.”

The secret discussions do not go any further.

Two days later, the Takeiri delegation flew to Beijing. Takeiri and his team had prepared a draft that would convey the Japanese government’s interest in restoring diplomatic relations. Since they were not official envoys, however, Takeiri knew that the Japanese government’s position would be that the Japan-US Security Treaty could not be abrogated and that relations with Taiwan could not be suddenly severed.

The first meeting between Zhou and Takeiri was held in the afternoon of July 27. There, the group was surprised by a sudden remark by Zhou Enlai:

The Japanese side listened to this message on Chinese leader Mao Zedong’s view with bated breath. They had until then naturally assumed that the Chinese would demand reparations for wartime atrocities.

Takeiri quickly came to feel that China was going to make substantial concessions. China would be most insistent on Japan recognizing the PRC as the sole legitimate government of China. At the beginning of the final day of talks, Zhou Enlai began his remarks:

“The perspective of the Chinese side that I am sharing with you has been endorsed by Chairman Mao Zedong.”

Premier Zhou then urged Prime Minister Tanaka to visit China in September, even presenting a draft of a potential Japan-PRC Joint Statement. This draft that was largely in line with what Takeiri and others had in mind. The Chinese premier made it clear that Beijing would not demand the abrogation of the Japan-US Security Treaty or the Treaty of Taipei, Japan’s peace treaty with the Republic of China.

At the end of the meeting, Premier Zhou told Takeiri:

“The contents of these meetings are very important. Please keep them completely confidential, other than from Prime Minister Tanaka and Foreign Minister Ōhira. We will also maintain secrecy. I say all of this with full confidence in you.”

Zhou Enlai entrusted Takeiri with the message. This was probably done with an eye toward further strengthening Tanaka’s and Takeiri’s own relationship of trust.

After returning to Japan, Takeiri made contact with Prime Minister Tanaka alone in a room at the Hotel New Ōtani. 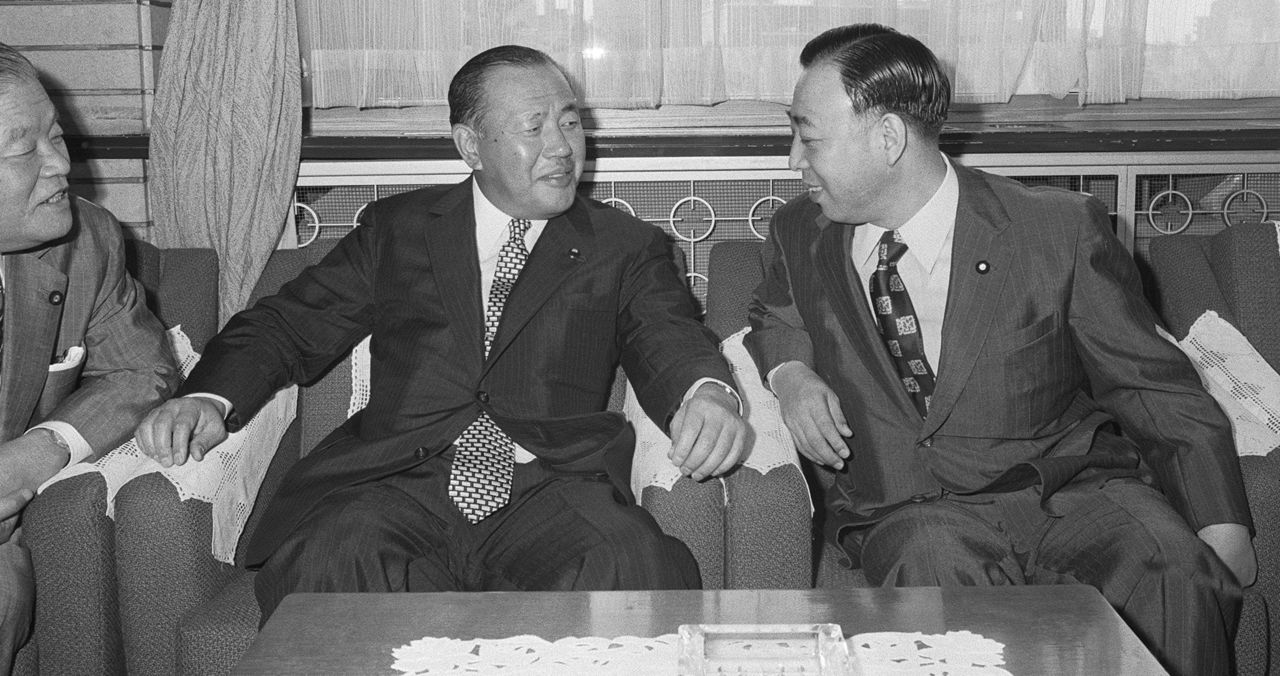 The prime minister took out the 52-page record of the meeting and began to slowly flip through the pages. He read them twice, and his first words were:

“You are Japanese, aren’t you?”

Tanaka wondered if Takeiri had been deceived by China.

Takeiri responded, “What on earth are you talking about?”

“Are you sure about what is written here?”

Tanaka was again shown the “Takeiri Memo,” which contained the draft of a joint statement.

“I checked it word for word with the Chinese side. There is absolutely no mistake.”

Tanaka pondered for a while and then announced, “I’m off to Beijing!” Prime Minister Tanaka had made up his mind to visit China.

Hashimoto received the draft memo and record of the meetings from Foreign Minister Ōhira. He had been anxious about what kind of difficult compromises China would put forward as preconditions for the restoration of diplomatic relations, but this “top-secret” document put those fears to rest.

Hashimoto told me that the big breakthroughs that were contained in the document were the Chinese side indicating that they would recognize the Japan-US Security Treaty and forgoing formal war reparations. He said, “To say the least, it was unexpected. Nevertheless, while we could go to China to pursue normalization on this basis, we were still not sure what would happen when we got there. But I felt that it might work out.”

The restoration of Sino-Japanese diplomatic relations was enabled by the international situation. Reconciliation between the United States and the PRC was undertaken by then President Richard Nixon and his aide, Henry Kissinger. If the United States moved closer to China, Japan would also be able to restore diplomatic relations. For China, too, Japan’s economic power was attractive. Indeed, following diplomatic normalization, Japan actively provided economic assistance. However, another important factor was that Tanaka was the prime minister at that time.

Kiuchi Akitane, former ambassador to France, accompanied Tanaka to China as secretary to the prime minister at the time. Kiuchi said that “Tanaka himself did not know much about China. I think it was only after meeting Zhou Enlai in person that he felt that he could get along with him. Premier Zhou and the prime minister hit it off perfectly. It was fortunate for Japan that these two men happened to be at the top of their respective countries when the international situation made it possible for reconciliation between Japan and China.

Today, the United States and China are once in a confrontational relationship. Japan is following the American lead. Fifty years have passed since the normalization of diplomatic relations between Japan and China. Compared to the honeymoon-like relationship of 1972, the distance between Xi Jinping and Japan’s contemporary political leaders has grown too great for good relations.

(Originally published in Japanese on August 31, 2022. Banner photo: Prime Minister Tanaka Kakuei exchanging documents with Chinese Premier Zhou Enlai, at right, following the signing of the Japan-China Joint Statement at the Great Hall of the People in Beijing, September 29, 1972. © Kyōdō.)