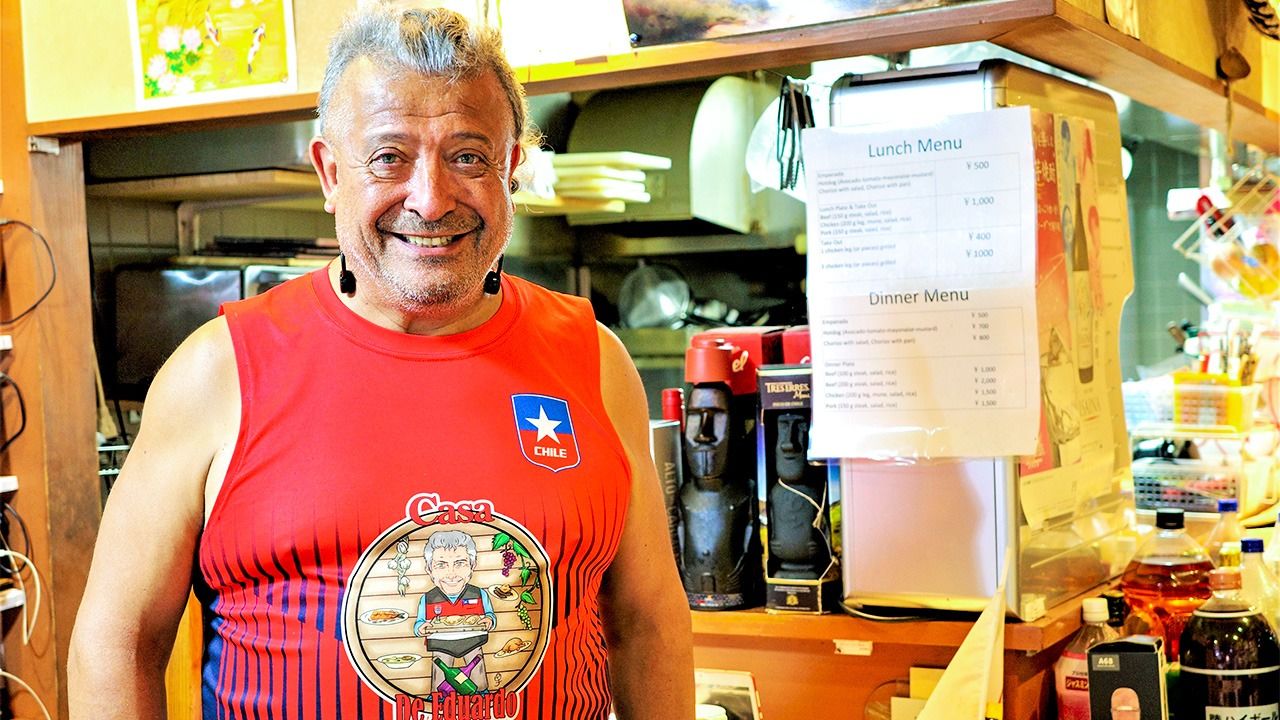 Take Exit No. 4 at Shin-Nakano Station on the Tokyo Metro Marunouchi Line, and you find yourself in an alley lined with red paper lanterns gently swaying in the breeze. Walk north and you soon come to one restaurant on the right side of the lane that stands out from the rest: Casa de Eduardo, literally “Eduardo’s House”—the lone Chilean restaurant in Tokyo.

Casa de Eduardo is known for its asado and empanadas. Asado refers to barbecue cooked over a charcoal fire. In South America it is customary for family and friends to get together on weekends and spend an entire day relaxing and enjoying asado. As a general rule, the men grill the steak and other meats while the women prepare the drinks and trimmings.

“When I was a kid, I was in charge of starting and maintaining the fire,” explains owner and chef Eduardo “Edo” Ferrada as he expertly gets a barbecue fire going. On the grill today is Uruguayan beef covered in aromatic herbs and oregano. The mouth-watering and perfectly-balanced salt seasoning and aroma of oregano ensure that the steaks are consumed in no time.

The restaurant’s other specialty is its empanadas. These are South American–style meat pies filled with a variety of items including meat, olives, and boiled eggs. One bite into the crispy outer pastry releases the juicy flavors of the stuffings. Many people frequently visit the restaurant for just this one popular item.

The restaurant, one of the few in Japan offering Chilean home cooking, boasts a widely varied clientele. When I visited, there were people speaking a range of languages, including Japanese, Spanish, and English.

“This place is more like my home than a restaurant,” explains Eduardo as he skillfully gets a fire going while evening sunlight fills the restaurant. “The customers all arrive feeling as though they’re coming to visit a friend’s house.”

Next year will mark 40 years since Eduardo first came to Japan. 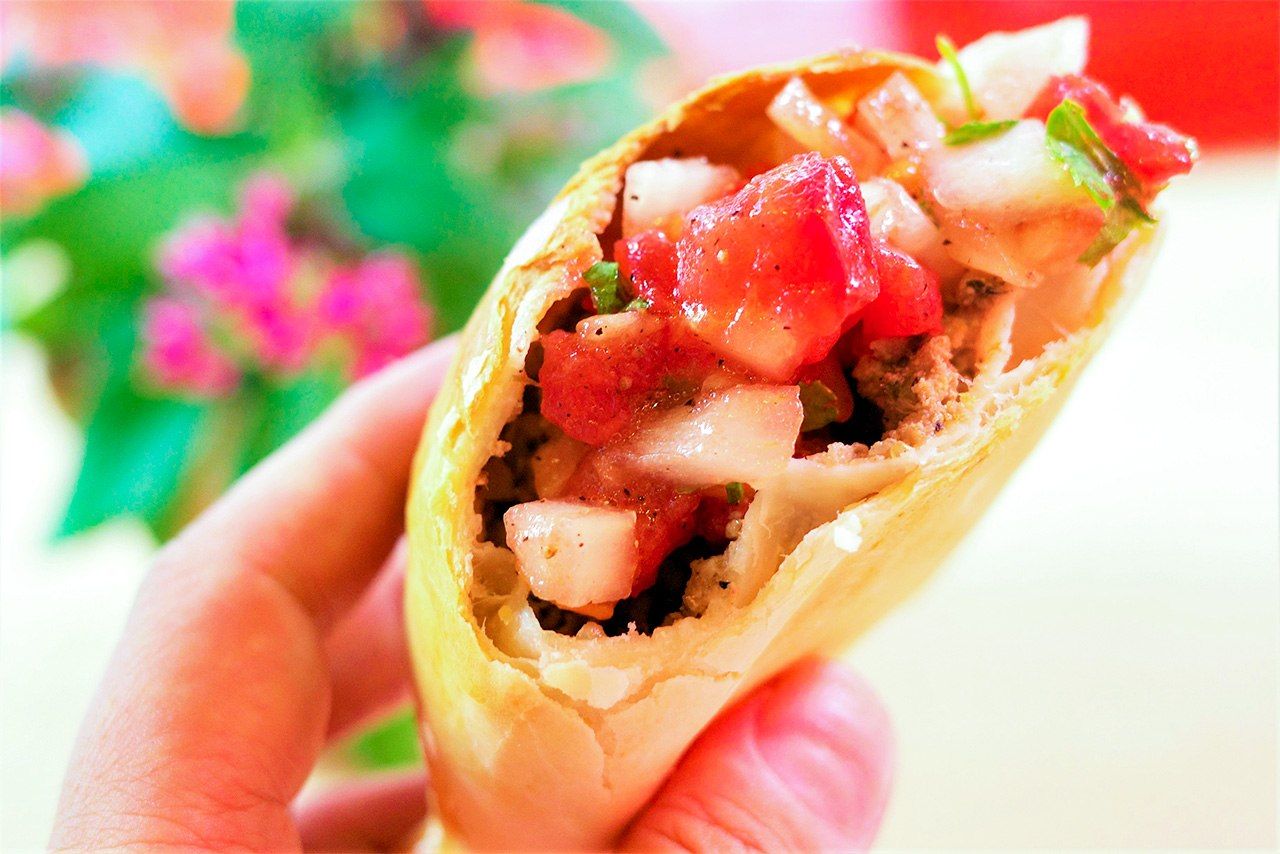 An empanada, one of the restaurant’s most popular items. The superb combination of the sour flavor of the Chilean condiment pebre and the juicy meats guarantee that they disappear quickly. (© Kumazaki Takashi)

“I came to Japan after I happened to see a newspaper advertisement for employment opportunities here,” explains Eduardo. “I was only twenty-seven years old and up for an adventure. It seemed like an interesting opportunity, so I answered the ad and took the required test. Though the competition was stiff, I passed, and three weeks later I started my new life in Japan.”

Eduardo was employed doing translation work in the telecommunications industry. He started off using his native Spanish and English, a language he knew well, but he wasn’t as successful as he had hoped.

“Translation is quite difficult, and I would make a lot of mistakes,” recalled Eduardo. “Since my translation jobs were coming from a major corporation, any tiny mistake would be punished by making me pay a fairly large fine. After three months, the company told me that they could no longer use me and that I should return to Chile.”

If he went back home, his girlfriend would be there waiting for him and he would be able to return to his old job. But he stayed in Japan. He thought it would be a wasted opportunity if he left so soon after having beat the odds to get a chance to come here. Plus, his pride wouldn’t allow him to return to his home country after having gotten fired.

So he stayed. He first made ends meet by working as a model, and then eventually found a job at the Japan International Cooperation Agency. He moved to the city of Komagane, Nagano Prefecture, where he began teaching Spanish to members of volunteer groups scheduled to be sent overseas.

During this time he was also doing translation work on the side to increase his income, leaving him barely any time to sleep. Soon afterward he left his job at JICA and returned to Tokyo, where he started his own company and devoted himself to translation. Having learned from his previous negative experience, he made himself one of the most outstanding and sought-after translators. As a result, his company quickly took off.

He came to Japan on a whim and paved a way for himself in this foreign country after experiencing rejection. His success is a testament to his inexhaustible energy. 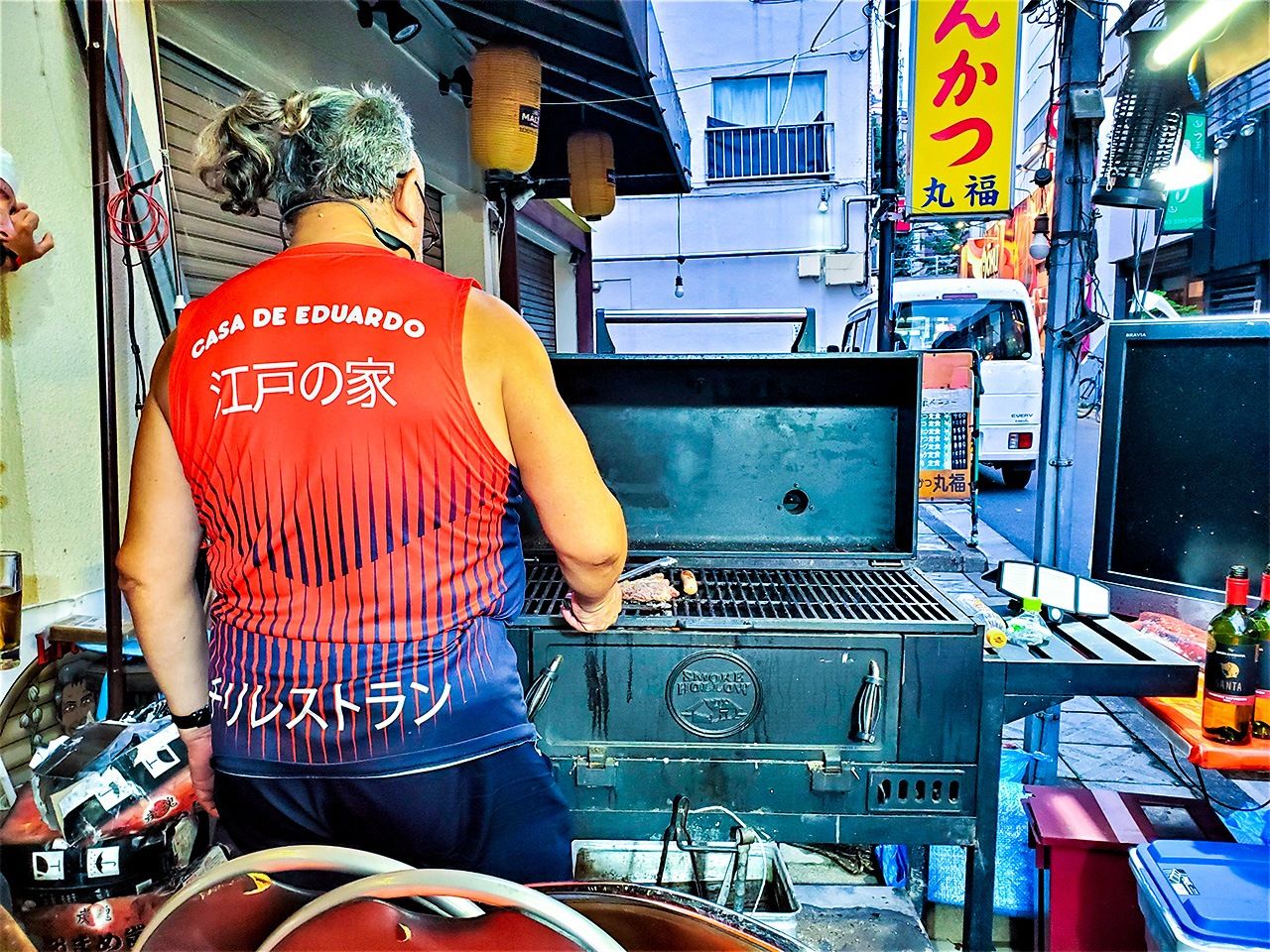 Eduardo grilling asado on a barbecue outside his restaurant. (© Kumazaki Takashi)

Improving the Reputation of Central and South Americans

Even while working hard at his translation business, there were other things he privately wanted to put his energy into. One of these was the Copa Chile (“Chile Cup”), a futsal tournament he launched in 1992, the year before the J. League was established.

“That was during the Japanese ‘bubble economy’ when there were shortages of workers. People from Central and South America of Japanese origin came to Japan to work, but they gained bad reputations for being ‘undesirables’ and people who ‘don’t obey rules,’ explains Eduardo. “As a South American myself I wanted to change that image, so I decided to start a soccer tournament—because if there’s one thing we can boast about, it’s being good at soccer.”

And once Eduardo gets an idea, he won’t rest until he has accomplished it. Thanks to influential friends, he got permission to use the sporting facilities of a university in Tokyo. Once the dates were set and the teams were decided on, he found that he had assembled 32 teams from 17 countries. In addition to 16 teams from the “host country” of Japan, there were teams from Latin American countries including Chile, Brazil, Argentina, Peru, and Colombia, as well as teams from European countries like England, Ireland, and Italy. In all, there were teams from 16 countries other than Japan.

The tournament, held over a weekend to determine the champion, featured intense rivalries between teams from different countries, which injected the event with high energy. That first Copa Chile tournament ended in success, but Eduardo had made one miscalculation.

“I had done all we had wanted to do, but I found that I was still in debt for a sum of ¥500,000,” explained Eduardo. “I thought to myself ‘Oh no!’ but everyone enjoyed the tournament and wanted me to hold it again the following year. So, I went into further debt. Then I thought that after the second tournament, I would be done with it at last. But no one would let me out of it. They said, ‘so many people enjoy themselves every year, you can’t stop now.’ So starting with the third year, some friends joined me as the sponsors in order to share the financial burden.”

Copa Chile, which provides opportunities for international exchange through futsal, has come to be loved by many over the 25 years it has been continuously held. 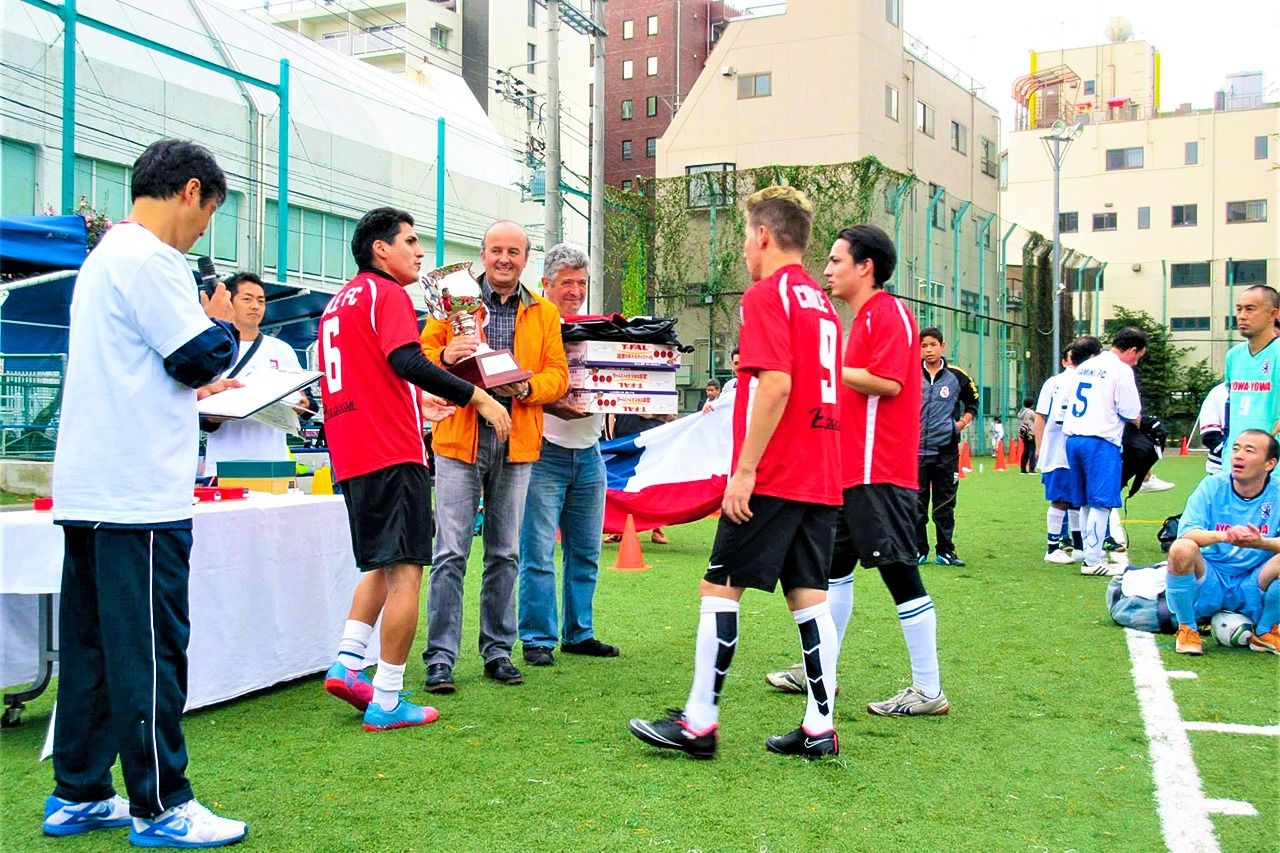 Although Eduardo is the sponsor of Copa Chile, he enjoys nothing more than taking to the field himself. (© Eduardo Ferrada)

A Direct Line from Relief Meals to his Restaurant

In 2011, 28 years after Eduardo arrived, Japan was hit by the 2011 Tōhoku earthquake and tsunami. In the immediate aftermath, Eduardo received a phone call from a TV station in his native Chile.

“We are sending reporters there and we want you to accompany them to the disaster site,” said the voice on the telephone.

Eduardo willingly took on the task. He met the reporters at the airport, rented a car, and drove them north to the Tōhoku region.

“An explosion at the Fukushima Daiichi Nuclear Power Station occurred the day after we had been filming near there,” recalled Eduardo. “We left Fukushima for Sendai, where I thought we would finish up once they filmed the harbor there. But the TV station wanted us to go further north, so not knowing what we would find once we got there, we got back in the car and drove on. Although some roads were closed and others had been torn to pieces by the flooding, the reporters—who had had experience as war correspondents—had us cross the mountains until we finally arrived in the Miyagi Prefecture town of Minamisanriku.”

After filming was finished, the group traveled from Sendai to Yamagata and then through Niigata on their way back to Tokyo, refueling whenever they could amid a shortage of gasoline across the region. Once the reporters were back in Chile, Eduardo’s mission was accomplished. But Eduardo would still have a chance to show his potential. During his momentary respite in Tokyo, he asked some friends to take part in a round of golf. Following this charity golf tournament to raise money, Eduardo stocked up on meat and vegetables, and they all went to Tōhoku.

“I returned to Minamisanriku this time to provide relief meals. I made asado and Spanish paella,” Eduardo explained. “We fed the earthquake refugees, of course, but also those in the Self-Defense Forces. The people who lined up to eat told me how good the food was.” 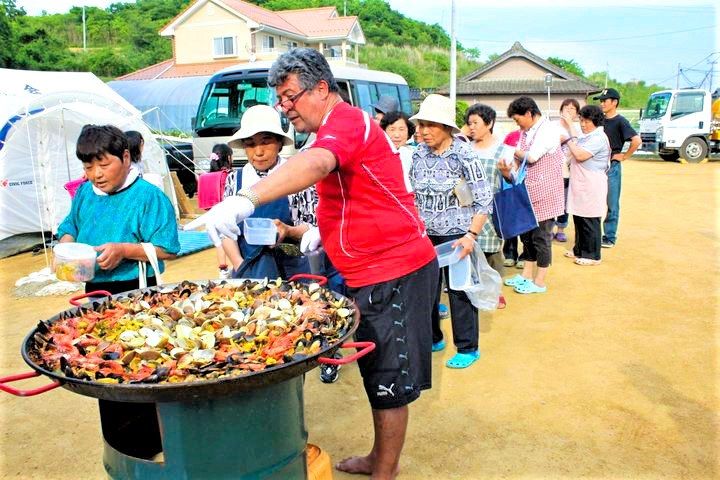 In the immediate aftermath of the 2011 disaster, Eduardo repeatedly visited the town of Minamisanriku to prepare his specialty paella. (© Eduardo Ferrada)

As was the case with the Copa Chile, money was not his primary concern. He simply does what he wants without hesitation. And if he knows that people will be pleased with what he is doing, all the more so. So that year Eduardo and a group of trusted companions visited Minamisanriku seven times to provide relief meals. It was this experience that led him to open his restaurant.

“I thought that nothing made me happier than seeing everyone enjoy the food I had cooked,” reflected Eduardo. “So, in 2012 a Spanish friend and I opened a restaurant together in Akasaka. A year later my friend became preoccupied with other things and left the restaurant, and so in 2014 I moved it to Shin-Nakano on my own. I still do translation work. The restaurant is busy, but I’ve learned to manage quite well now, so I do my translations on the terrace during down times.”

The amiable Eduardo is quite a character, and as a result his restaurant has become something of landmark in Shin-Nakano.

“When I first came to Japan I thought that I would return to Chile once I reached the age of forty, before I knew it I had reached my sixties,” said Eduardo. “Although things have been tough during the COVID-19 pandemic, I’ve spent a long time making a life for myself in Japan, so I’ll probably stick it out here until I’m seventy-five because the people in Nakano are kind and so many of them keep coming to my restaurant.”

Eduardo enjoys his life here in Japan, a country he first came to on a whim. What chance developments lie ahead in this life that he created out of a random decision, no one can say for sure. 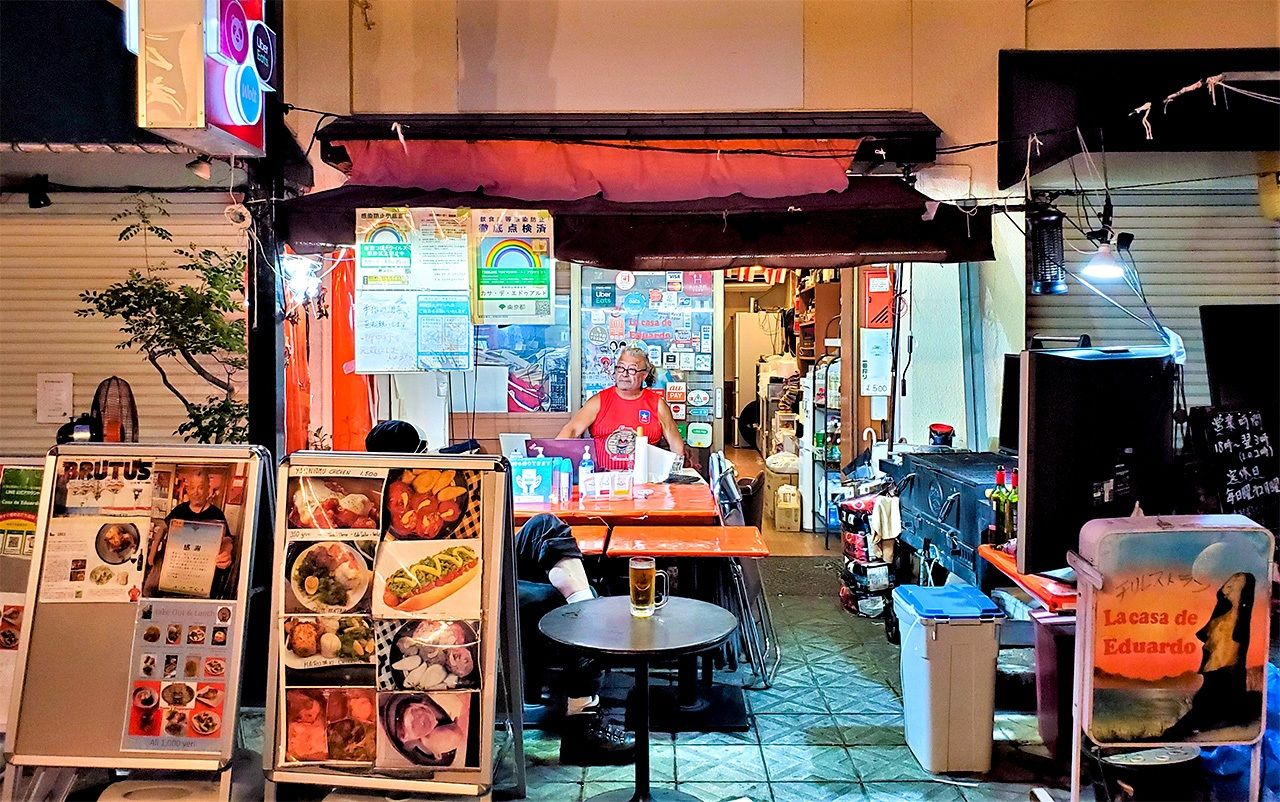