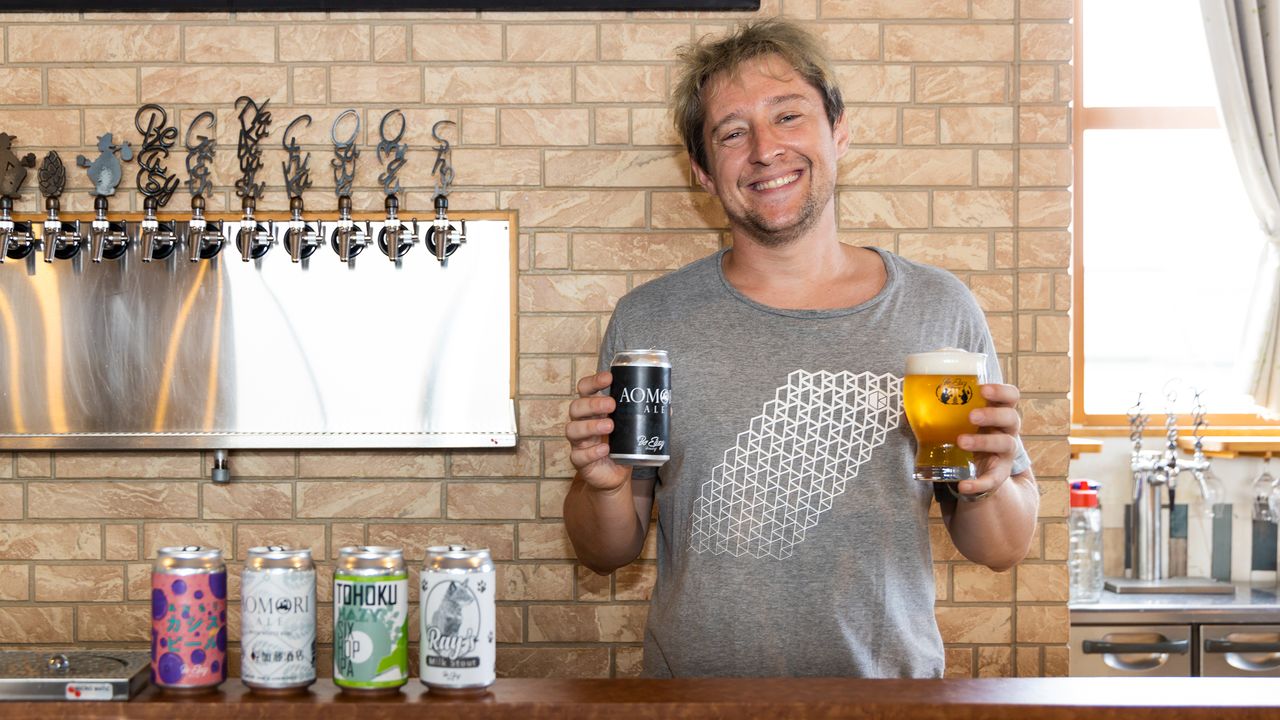 A Bubbly Future for Japanese Brew

Food and Drink Culture Oct 5, 2022
Gareth Burns’s company Be Easy Brewing makes craft beer in the Tōhoku city of Hirosaki, Aomori. Here, he talks of how the region he calls home has helped drive his success in Japan’s growing craft beer industry.

Neither American nor Japanese

Hirosaki, Aomori Prefecture, was once a castle town of the Tsugaru domain. Today it is home to the local craft beer Aomori Ale, which has won fans with its fruity aromas and smooth drinkability. The source is Be Easy Brewing, founded in 2016. Beyond standard products like Aomori Ale, Be Easy also brews two new beers a week and supplies some 300 shops all over Japan.

A hallmark of Be Easy beer is its strong connection to the local culture. Many of its brews have been named using the unique local Tsugaru-ben dialect of Japanese, like its Kutchaberu (“talkative”) saison and Nottsudo, a New England IPA named for the “plenty” of hops going into it. Be Easy’s beers also rely on Aomori’s signature produce like apples or cassis, and some even use kōji—rice inoculated with the mold Aspergillus oryzae used in sake brewing—from the Hirosaki sake brewery Miura Shuzō.

All of this is directed by an American brewer, Gareth Burns. Burns first came to Japan in 2005 as an explosive ordnance disposal technician stationed at Misawa Air Base in Aomori Prefecture.

The United States became a major force for craft beer brewing in the 2000s, and there are now more than 9,000 small-scale breweries and taprooms that brew on-site there. Knowing this, some people drink Aomori Ale and claim it has the taste of America, but Burns actually came to Japan when he was 20 years old. He first started drinking alcohol and developed his adult palate in Aomori.

“Even when I go back home to the United States, I get tired of ‘good old home cooking’ in about three days and am ready for miso soup and raw cabbage. So, our beer is really more of a mix of both cultures. It’s the taste of Gareth!” Burns says with a laugh. 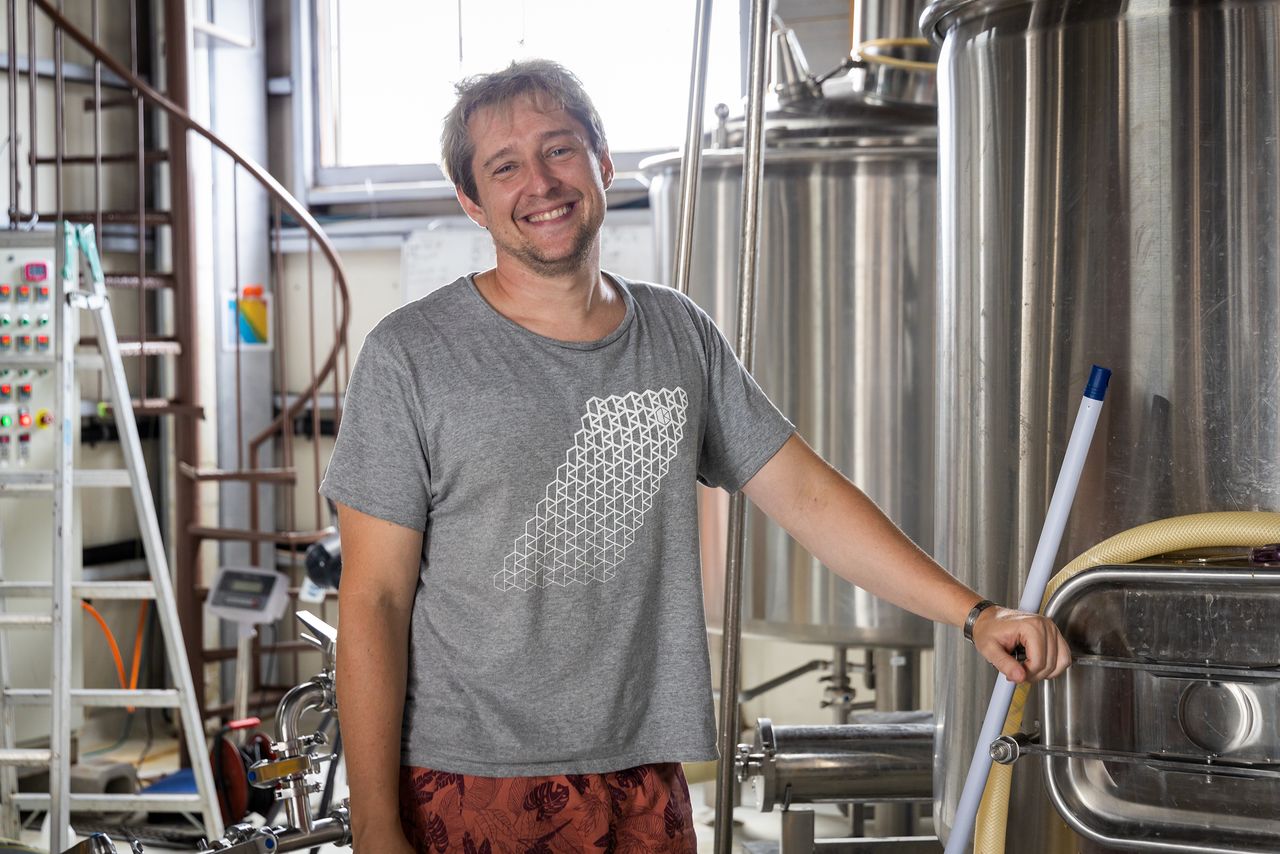 Burns keeps regular tabs on conditions in his brewery. 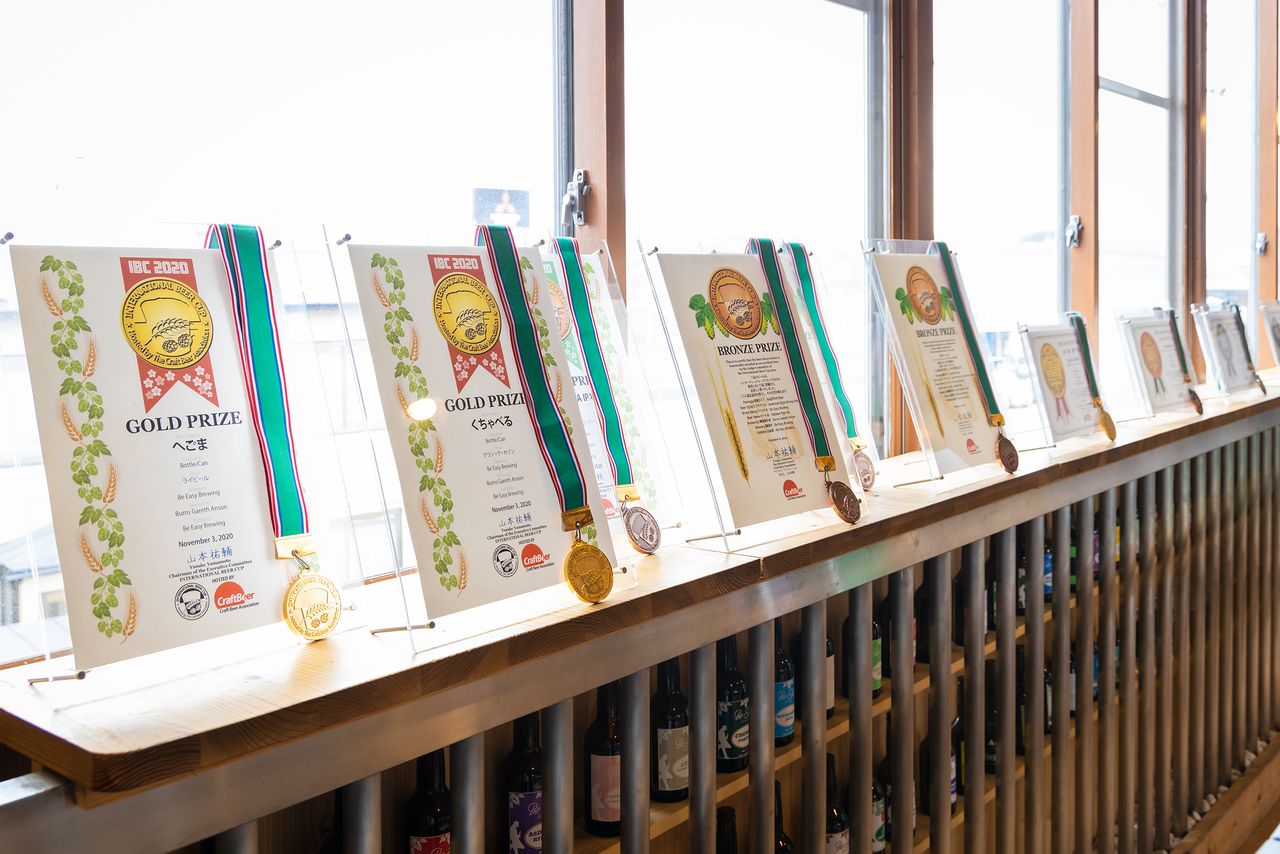 Searching for the “Real Japan” Off Base

Burns was born in the state of Colorado in 1984, but grew up in Philadelphia, Pennsylvania. He joined the US Air Force right after graduating from high school and ended up at Misawa Air Base after stints in the Middle East.

“The base was like a little bit of America inside Japan. When I left, it was usually only to visit a bar where everyone speaks English. I didn’t know a thing about Japan,” Burns recalls. The glimpses he caught of Aomori’s culture and landscape from inside the base, though, gradually awakened an interest in learning more. When his two-year tour was done, he decided to leave the military and try living in Japan on his own for a year.

Although he was a city-boy born and raised, he had no interest in major urban areas like Tokyo or Osaka, or even the prefectural capital of Aomori. He chose Hirosaki, Japan’s largest apple producer and home of Hirosaki Castle and the Iwakisan shrine, because “It was filled with natural greenery, and also had a sense of history.” He started working as an English teacher, and soon found that the place was to his liking. “The food was delicious, and every season had its own beauty. Life was so safe and easy,” he says, so he kept extending his stay.

Burns had earned his master’s degree while in the military, but jobs open to non-Japanese citizens were scarce in Hirosaki. When the English school where he’d worked went bankrupt, he had a hard time finding another job. He refused to give up, though. He had become fascinated by the intricate expression found in Tsugaru-jamisen, a unique local style of playing the shamisen, the three-stringed Japanese instrument. “I knew if I didn’t live here, then I’d never learn to play proper Tsugaru-jamisen.”

Burns founded his own English school in 2011 to stay, and since then has become proficient enough a player to join shamisen competitions. His Japanese speaking also improved to the point that he has become a regular guest on popular local television programs as a rare nonnative master of Tsugaru-ben. Then, in 2014, he got started on a new venture: to spread delicious craft beer across Aomori and throughout Japan. 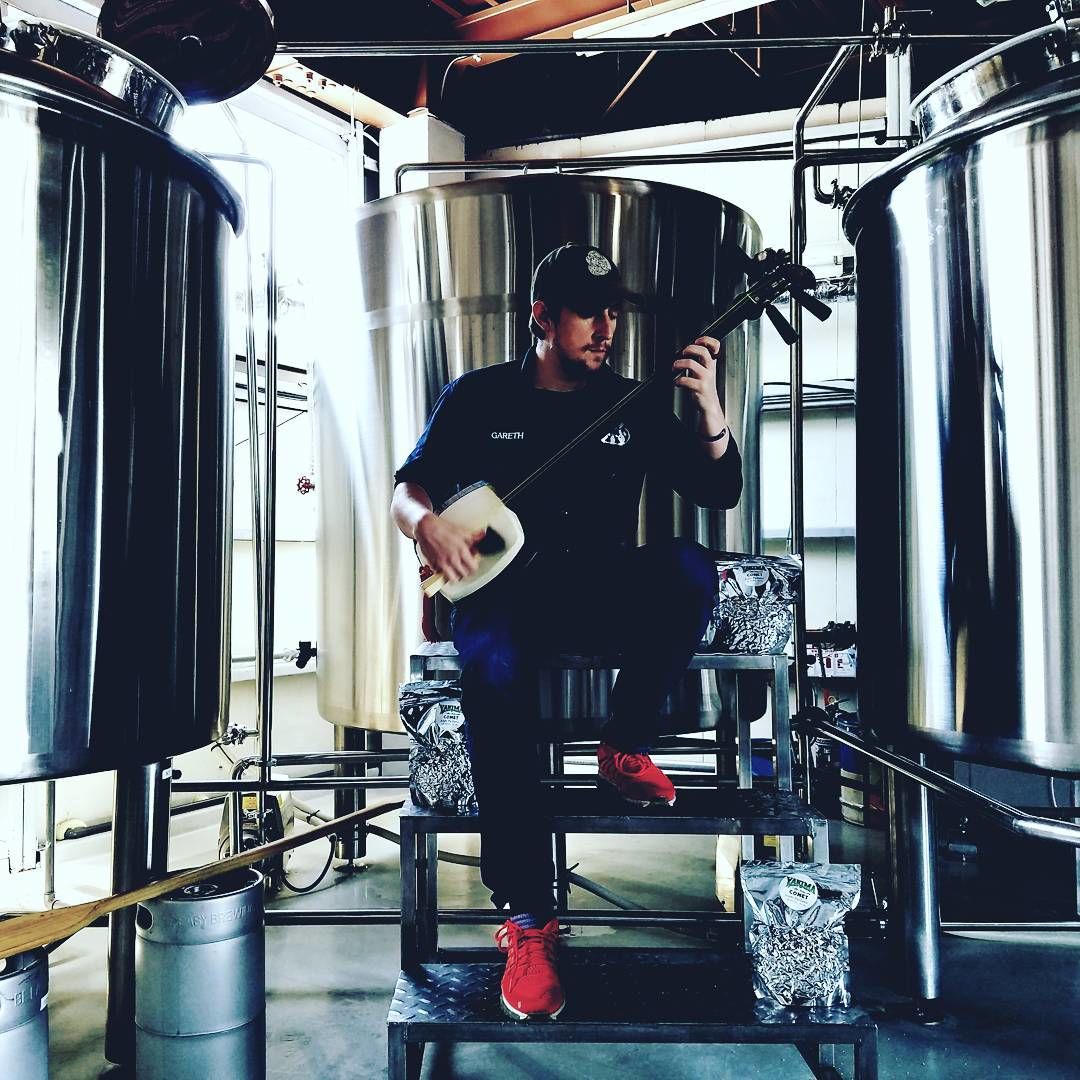 Success Thanks to Hirosaki

Burns first encountered craft beer in Japan. He was so taken with the taste of Gifu Prefecture’s Hitachino Nest Beer that he started searching out craft beer from around the world.

When he visited the United States, he enjoyed his friends’ home brew and visited local breweries for tours. He felt that craft beer, with its creativity and diversity, was a way to convey local flavor and traditions. Taprooms were places for customers to connect with each other and strengthen local bonds. He found himself fascinated by the culture that craft beer seemed to create on its own.

There was still little awareness of craft beer in Japan at the time, though. As Burns says, “Craft beer had just started taking off in Tokyo, so I figured it was going to take some time for Aomori to catch on. And if that were the case, I thought I should make my own great beer here and share it with the whole country to help root craft beer culture in Japan.”

But people in Hirosaki were resistant. They offered comments like, “Who would drink it?” or “It’ll never work.” Some people did recommend he try working with a local bank, but it was challenging to convince a small regional bank to offer a loan for an industry that even the big cities barely recognized. It also took a whole year just to get a brewing license approved. “It likely wouldn’t have taken so long to get financing or a license in Tokyo or the like. But in Hirosaki, it was the first application for a brewing license they’d seen in twenty years,” he reflects.

In the end, it took about two years from his first moves until the opening of the brewery’s taproom, Gyaresu no Ajito (Gareth’s Hideout). During that time, he also prepared by studying brewing techniques at breweries in the United States and Japan.

Despite the difficulties that Hirosaki brought to the venture, he now looks back on the time with gratitude.

“There were lots of problems because I was in Hirosaki, but being here is also what made it work. Being in a city with higher prices for land and such, we might only have been able to build a small brewery. I might have given up on a taproom. Local people told me I couldn’t do it in Aomori, that it was impossible in Hirosaki. But we needed less capital to try than we would have in Tokyo, and we had fewer competitors. I do wish people could be more positive about it. If our products become a national hit, those profits and related jobs benefit the local community.” 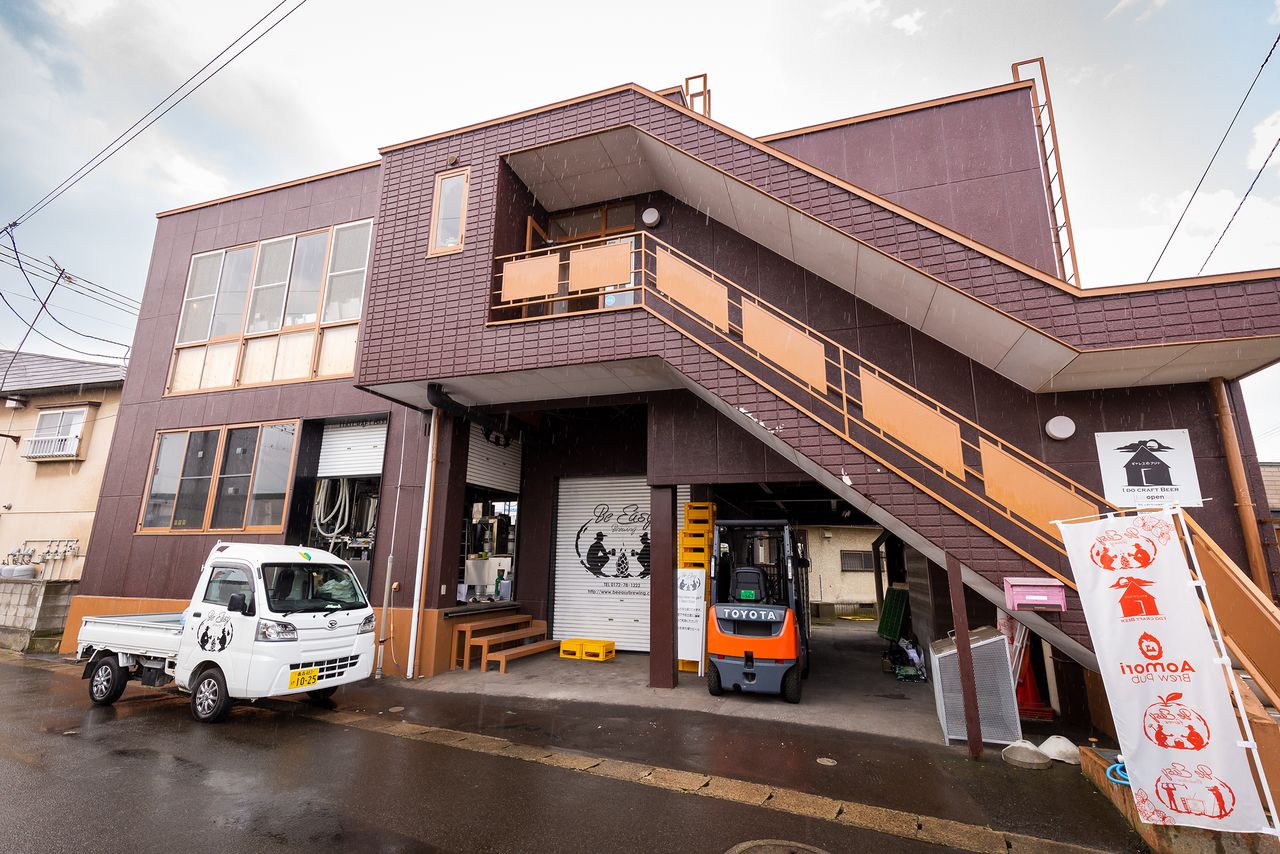 The brewery is on the first floor, and the taproom is on the second. 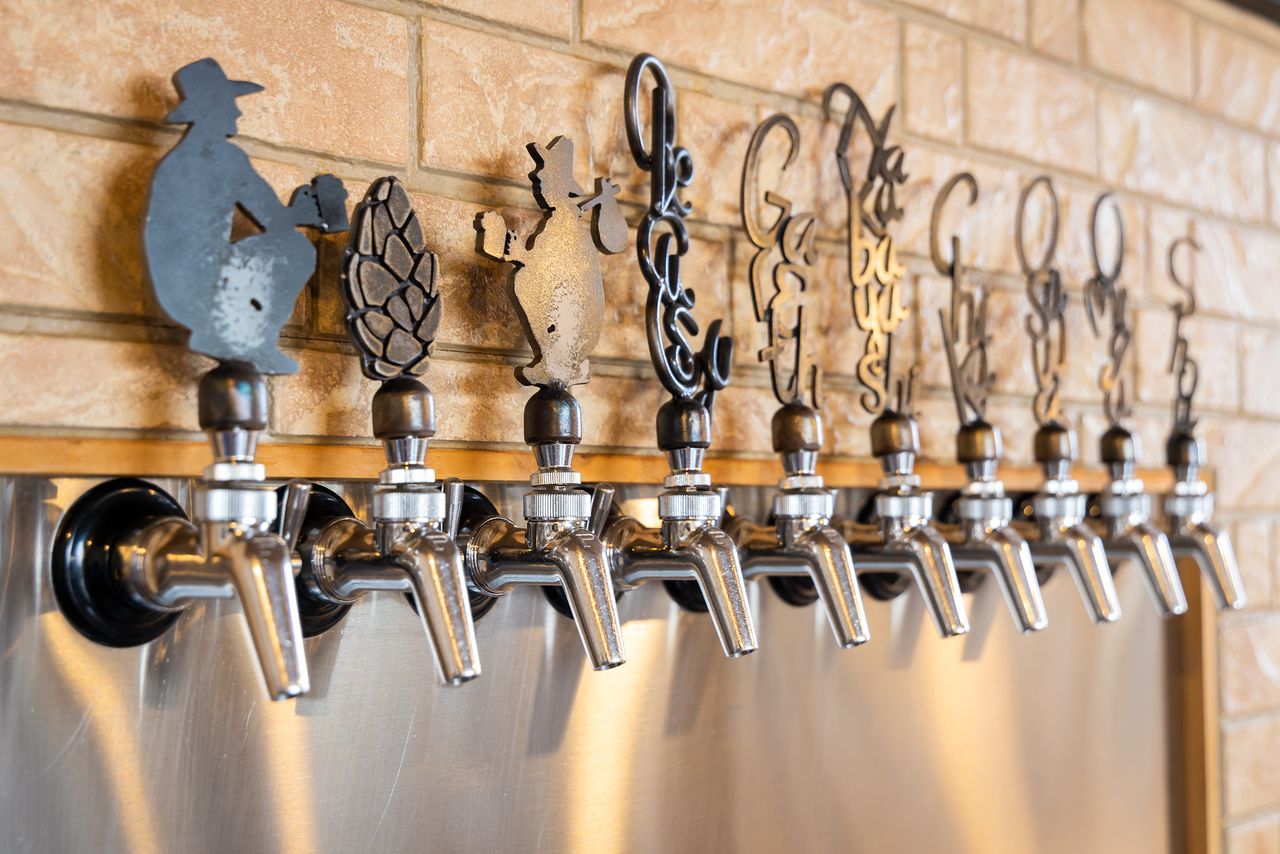 The taproom has 12 rotating taps available at any time.

Just as Burns predicted, craft beer took off soon after he opened his doors. Orders started flowing in from all over Japan, and within two years business was booming.

Naturally, there have been no shortcuts on flavor. Many local customers were calling out for a beer flavored with the area’s famous apples, but at the start Burns prioritized building a reputation as a core brewery. He only tried brewing with apples after Be Easy Brewing had already won several awards for its standard outings. 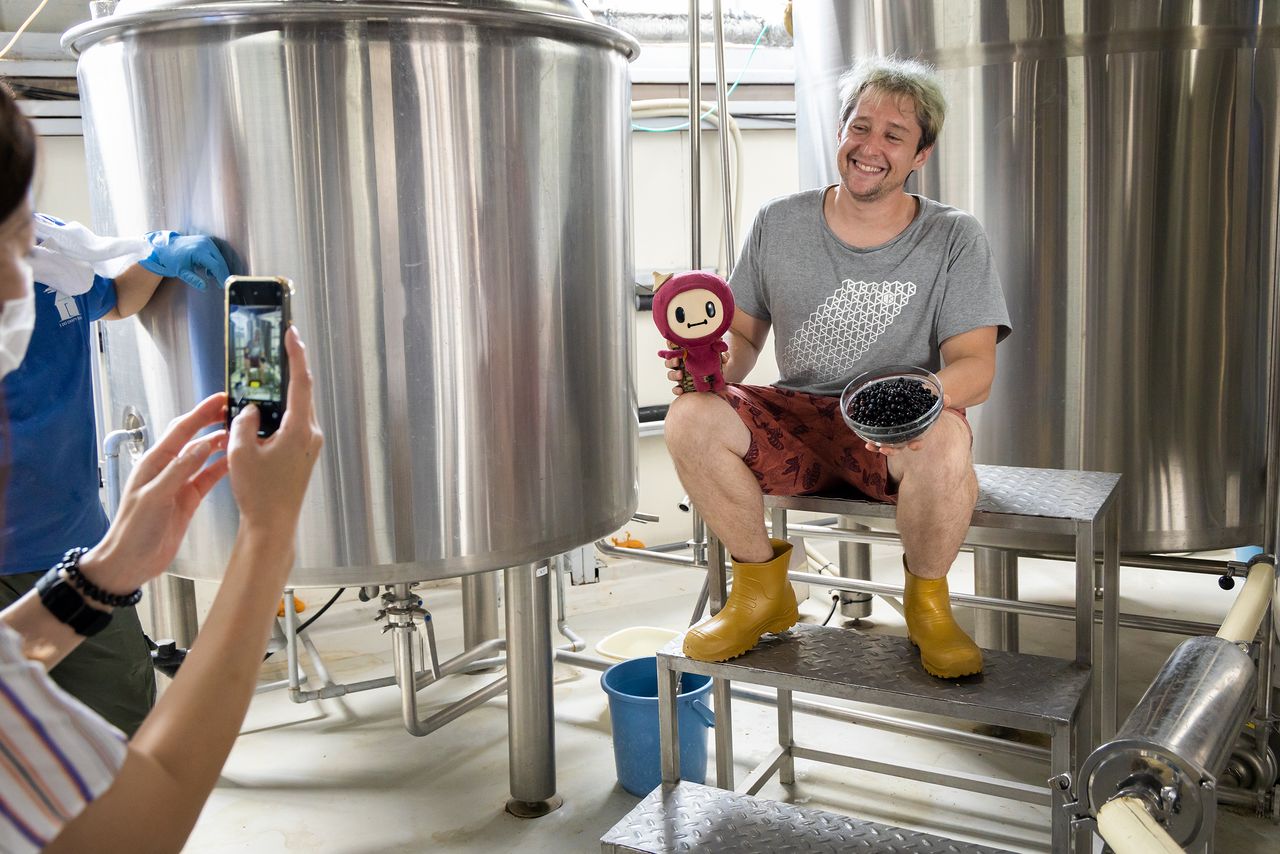 Aomori is also Japan’s largest producer of cassis. On the day of this interview, Burns also had a meeting with prefectural government officials about cooperating on a cassis beer. 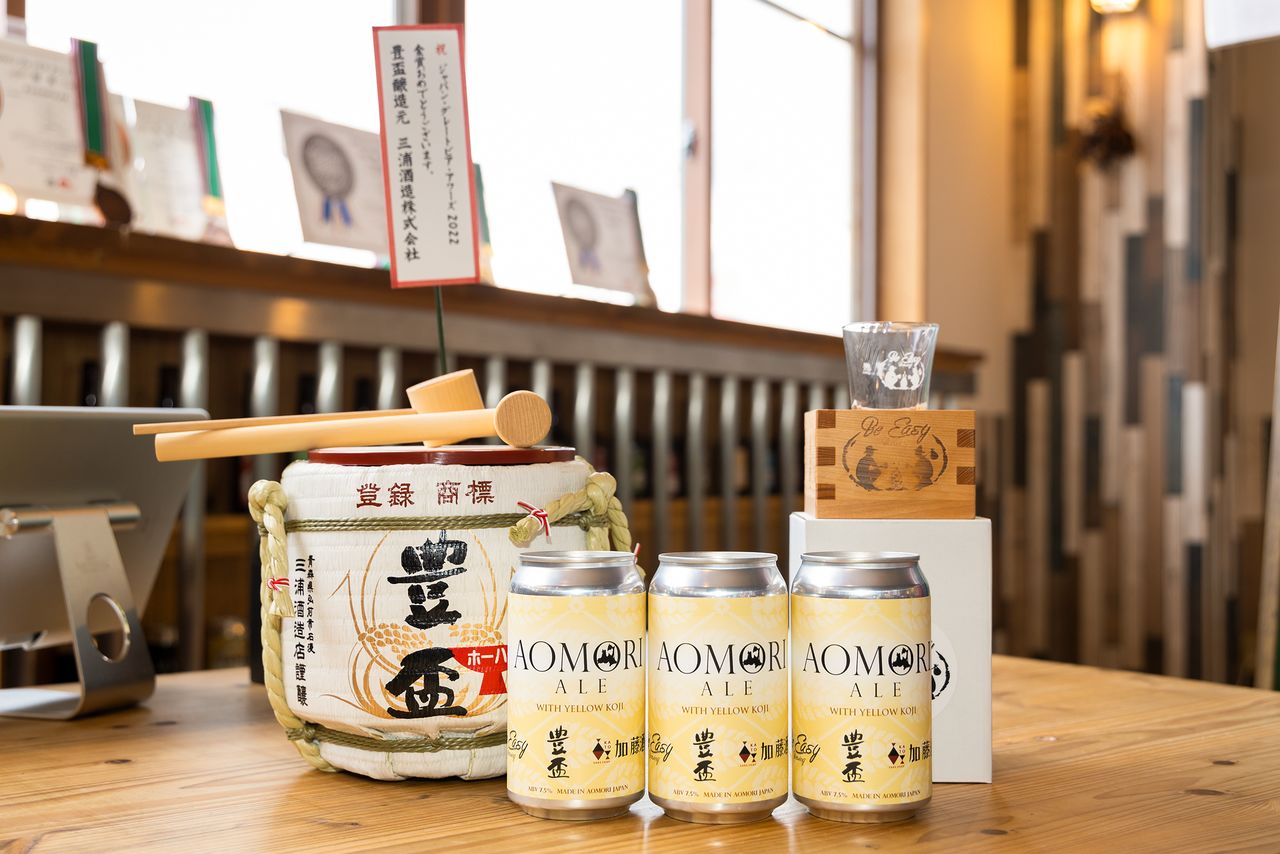 Aomori Ale with Yellow Kōji, made with kōji from the Miura Shuzō sake brewery, won gold at the 2022 Japan Great Beer Awards.

As for using Tsugaru-ben in the names, he says, “You’re curious about what it means, so you look it up on your smartphone, right? I want people to think about Aomori while they’re enjoying a delicious beer. Maybe some of those people will want to drink it in Aomori, and come to Hirosaki to see the castle or the shrine at Iwakisan.”

The taproom also serves food made from vegetables Burns grows himself. He also grows hops, and once a year brews using fresh-picked raw hops. The spent lees from brewing go into fertilizer for the farm as part of a cyclical farming method. “The reason we can have our own fields and use fresh hops is also because we’re in Hirosaki,” Burns says, emphasizing his gratitude toward the local area.

In 2020, Be Easy Brewing also opened the Aomori Brew Pub in the prefectural capital, Aomori. Then, with the pandemic keeping many customers away from the bars, they started selling cans in the summer of 2021. The labels include recommended dishes and snacks to pair with each beer in an idea to help customers enjoy “Gareth style” drinking anywhere. 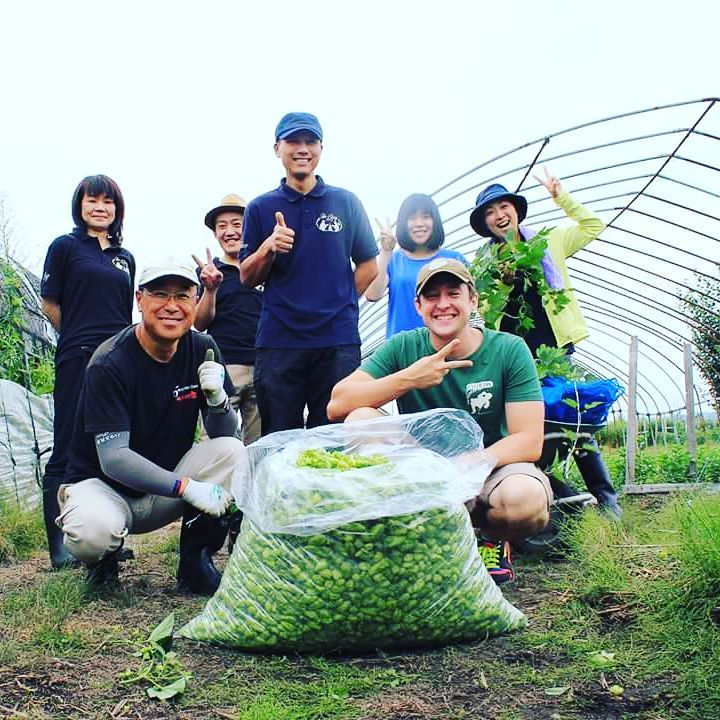 Local residents help out during the hop harvest. “Only in Hirosaki!” says Burns. (Courtesy of Gareth Burns) 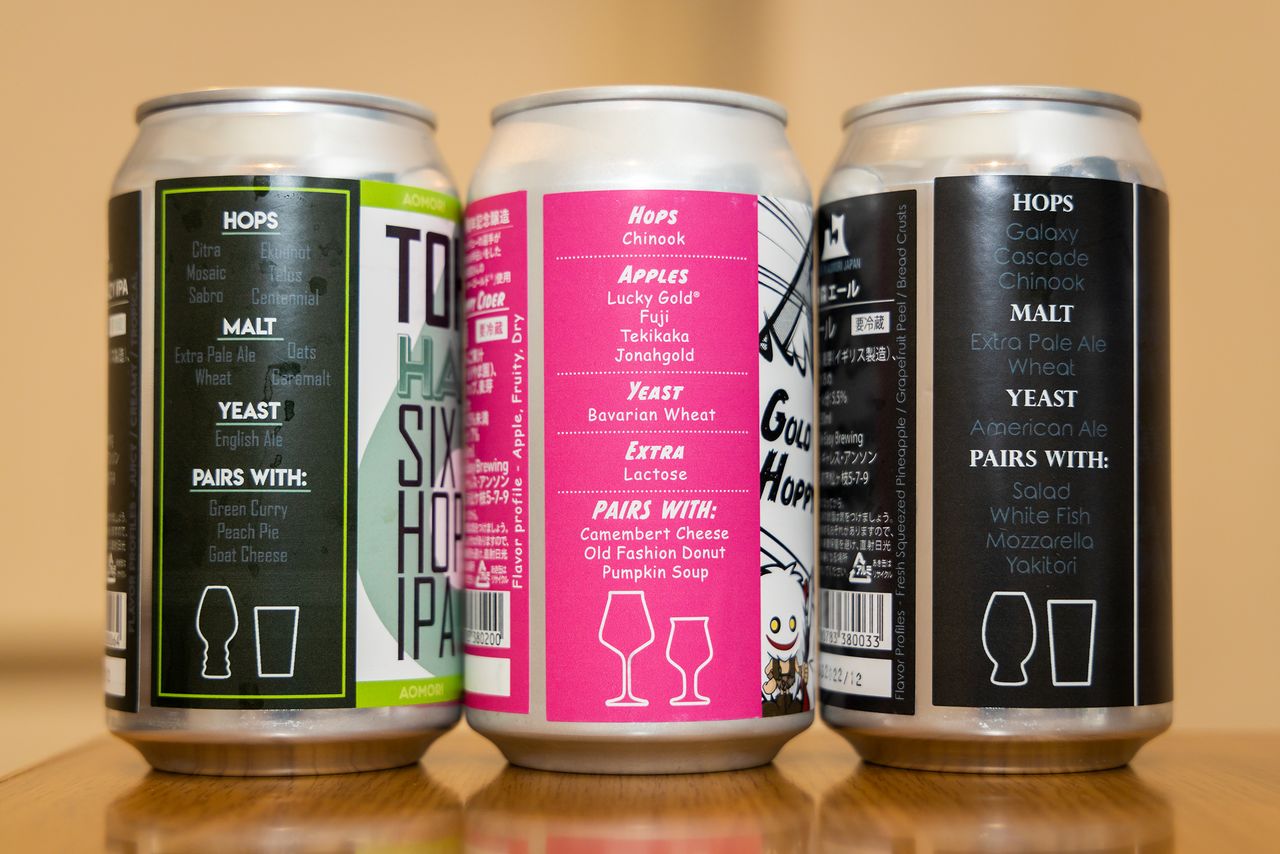 The cans have recommended pairings right next to the ingredients list—the kind of customer service that has helped spread craft beer culture in Japan.

An Industry with No Rivals, Only Comrades

Now, he spends his days traveling the length and breadth of Japan visiting retailers and joining events. That in itself offers some issues as well. “The Tokyo dialect has become standard throughout Japan, but I learned Japanese in Hirosaki, so Tsugaru-ben is standard for me,” Burns says. Somehow, though, he manages to get by everywhere in Japan using the dialect.

Recent years new have seen small breweries pop up all over Japan, meaning Be Easy has more and more rivals. Burns, though, seems completely unworried about competition. On the contrary, he says: “If ours was the only beer selling, we’d have to produce too much, and the flavor would suffer. It wouldn’t be ‘the taste of Gareth’ anymore. I’m not that interested in money, anyway. I just want to live a meaningful life.”

He goes on to speak of other breweries with hope for craft brew’s potential. “The Japanese market is dominated by a few major producers, and craft beer only accounts for about 2 percent overall. Rather than fighting over such a tiny slice of the pie, I hope we can work together to spread craft beer culture and bring that percentage up to five or ten.”

Indeed, he hopes even more good craft beer brewers to come to Aomori. “It’d be great to just live easy, drinking their beer and listening to Tsugaru-jamisen,” he says with a laugh. It does seem that Hirosaki is an ideal place to just be easy. 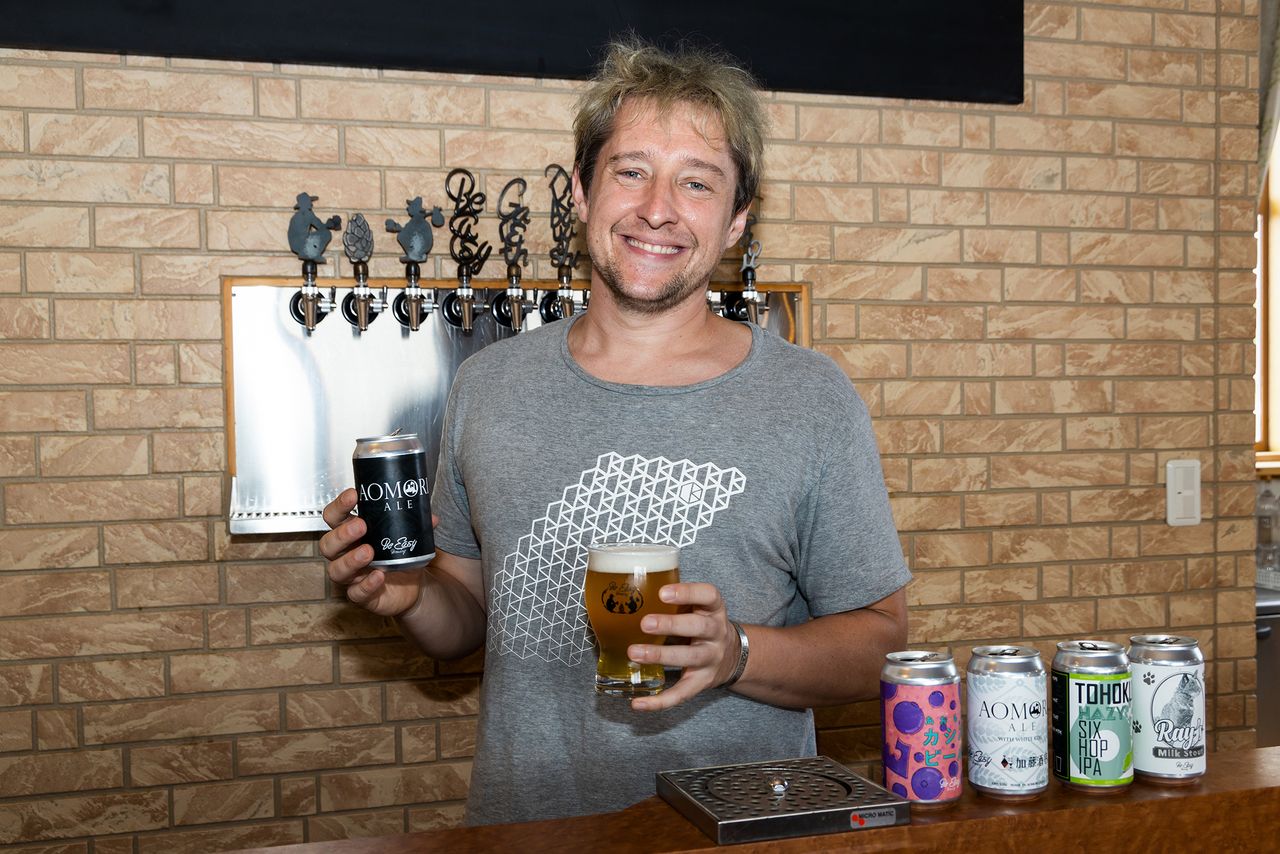 Gareth’s Hideout closed temporarily during the pandemic, but has reopened. Burns seems to be as busy as ever.