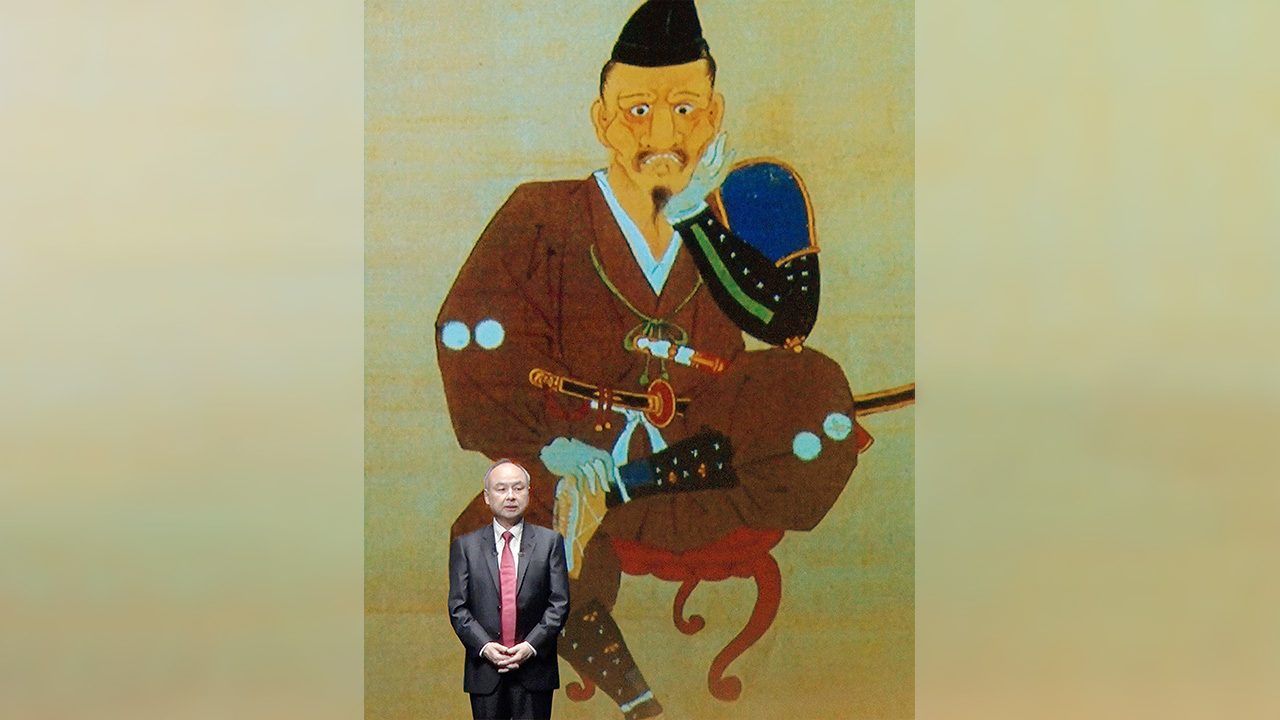 Economy Society Politics Oct 20, 2022
On the tail of its boom year in fiscal 2021, the SoftBank Group has reported a net loss of ¥3.16 trillion for the April–June quarter of 2022. Having sold some of its treasured Alibaba shares to cover the red ink, the firm is seeing its status as an investment giant undermined. A look at whether SoftBank can successfully weather this latest storm.

The SoftBank Group has sold a sizable number of the shares it holds in Chinese internet giant Alibaba, removing Alibaba from its status as an equity-method subsidiary. This sale was needed to cover heavy losses recorded by the Japanese company in the first quarter of this fiscal year, from April to June, but it threatens to rob it of the “magic wand” that its investment business has represented in recent years. It is clear that SBG has reached a moment of truth.

This sale consists of settling prepaid forward contracts corresponding to a maximum of 246 million American depository shares of Alibaba between mid-August and end-September 2022, reducing SBG’s equity interest in Alibaba from 23.7% to 14.6%. With SBG’s stake falling below 20%, Alibaba will no longer be an affiliated company of SBG, as it has been since 1999. Through this sale, SBG will book pretax gains of about ¥4.6 trillion for July–September 2022.

On August 8, two days before the sale was announced, SBG reported a net loss of ¥3.16 trillion for April–June 2022, the largest first-quarter loss ever recorded. Having booked a combined loss exceeding ¥5 trillion in the six months since January, Son stated, while situated before a famous portrait that Tokugawa Ieyasu had commissioned as a warning to himself after his defeat at the Battle of Mikatagahara in 1573, “We’ve lost 5 trillion yen in six months. I too want to reflect on this, and have it serve as a reminder.” Son continued by saying that he wants to use the occasion to discuss and reflect on SBG’s current situation.

SBG posted net profit of about ¥5 trillion in the year ended March 2021, the largest figure ever recorded by a Japanese company. For better or worse, SBG is an investment company that is influenced by the ups and downs of the stock market. That said, the market responded favorably to SBG’s moves to recover from its heavy losses, and the company’s stock has risen from one high to the next since the start of the year.

The sale of Alibaba stock, however, means the dismantling of SBG’s business model as an investment company. SBG has focused on investments in unlisted companies centering on the AI sector. Its net asset value, considered to be the most important management indicator of investment companies, reached a high of ¥27.3 trillion at end-September 2020, with Alibaba shares accounting for nearly 60% of the total.

The stock market was recovering rapidly at that time thanks to the monetary easing of many central banks in response to the COVID-19 pandemic, and Alibaba shares were trading at record highs. To finance its investments, SBG used derivative transactions rather than unloading Alibaba stock outright for cash.

When Alibaba’s stock was trending downward, SBG concluded forward agreements at a fixed price, paying financial institutions in actual shares. It also entered into floor transactions paired with option trades to protect against the risk of the stock price falling below a certain level, so as to increase gains when Alibaba shares rose in price.

Also, through collar transactions combining option trades placing lower and upper limits on the stock price, SBG limited the amount of gain or loss when the stock price rose or fell. These derivative transactions were made possible by the steep rise of Alibaba’s stock since SBG’s initial investment. It was the ascent of Alibaba shares that SBG used to finance its investments. As Alibaba grew, so did its profits, which became reflected in SBG’s consolidated financial statements.

SBG’s investments in Alibaba began with an investment of ¥2 billion made in 1999 after a 10-minute conversation between Son Masayoshi and Jack Ma, the founder of the Chinese firm. Once Alibaba listed its ADR stock on the New York Stock Exchange in September 2014, the book value of SBG’s equity interest in Alibaba climbed upward, approaching ¥4 trillion at its maximum. During this period, SoftBank grew from a computer software wholesaler into an Internet communications company, a mobile phone company, and an investment company, all made possible by its Alibaba holdings.

While it once served as a “magic wand” enabling SBG to pursue its various goals, the situation has now changed for Alibaba stock. The first factor is heightened geopolitical risk. Economic rivalry between the United States and China has dramatically altered the business environment for Chinese companies. Moreover, the US government has strengthened its surveillance of Chinese firms. The possibility is increasing that Alibiba will have to delist its ADR stock from the NYSE.

Alibaba is also experiencing political risk in China. Ma’s criticism of financial authorities displeased the Xi Jinping administration, which responded by preventing the Ant Group, Alibaba’s fintech affiliate, from carrying out its initial public offering in November 2020. Alibaba is now under pressure to decouple from its affiliate. Alibaba is also losing its management freedom, as seen in its provision of funds equivalent to ¥1.7 trillion to the government for the Xi administration’s common prosperity policy aimed at narrowing the widening wealth gap.

Given the government’s repeated tightening of controls, Alibaba’s formerly buoyant earnings have lost their momentum. As a result, the benefits of retaining Alibaba as an equity-method subsidiary had diminished for SBG.

Another adverse factor is the global tightening of monetary policy, which is causing stock markets to retreat. A worldwide pickup of inflation as economies recover from the COVID-19 pandemic has caused the Federal Reserve Board to raise interest rates successively in the United States. On August 26, the Dow Jones Industrial Average lost 1,000 points on the New York Stock Exchange.

Alibaba has suffered a triple blow of geopolitical risk, domestic political risk, and the downside risk of stock prices ensuing from global monetary tightening. Alibaba stock is also listed on the Hong Kong Stock Exchange. Despite the ability to freely convert between NYSE-traded ADR shares and Hong Kong–traded shares, Alibaba stock plunged on the HKSE to about the level of its initial listing. As of end-June 2022, SBG’s net asset value was ¥18.5 trillion, of which Alibaba stock accounted for only 21%.

The Sorry Spectacle of the SoftBank Vision Fund

This triple risk cannot be controlled, whether you are Son or anyone else. SBG’s sale of Alibaba stock, whether it was desired or not, is like being forced to give up a magic wand. While SBG still holds 14.6% of Alibaba stock, this is not a dependable level for SBG, since two successive quarters of consolidated losses have shrunk its investment funds.

SBG’s problem is that it has not found a company to invest in to take the place of Alibaba. Unlisted companies whose valuations top $1 billion within 10 years after their founding are known as unicorns. Through its investment fund SoftBank Vision Fund 2 (SVF2), SBG has implemented what it calls the “Cluster of No. 1 Strategy,” investing in about 300 unicorn companies mainly in the AI sector. These 300 companies represent more than 10% of the world’s unicorns.

In its financial statement for April–June 2022, SBG recorded an investment loss of ¥1.34 trillion for SVF2. This loss was influenced by the Composite Index of the Nasdaq Stock Market, the home of many tech firms, falling by 22% since end-March, as well as by the decline of the valuations of many privately held unicorns. However, an index of the publicly traded companies in the Vision Funds’ portfolios fell by 31%, a larger decline than the Nasdaq index. Son admitted at his August news conference that the Vision Funds, which at one point had grown by ¥7 trillion, had given up almost all of their gains.

The unicorns in the Vision Funds’ portfolios have included promising growth companies. One of these is Klarna, a Swedish fintech firm offering a buy now, pay later service. In its business model, users make installment payments with zero interest, and the company grows through the commissions paid by retailers. When SVF2 led an additional funding round of $639 million (about ¥70 billion at the exchange rate at that time) in June 2021, Klarna’s valuation rose to $45.6 billion (about ¥5 trillion).

However, tighter monetary policy caused interest rates to leap worldwide, Klarna’s debt burden rose sharply. While the company succeeded in raising $800 million (about ¥107.4 billion) in funds in July 2022, its corporate value plunged to $6.7 billion (about ¥900 billion), just a seventh of the value of a year ago. Another company in SBG’s investment portfolio is Grab Holdings, a vehicle dispatch service based in Singapore whose stock is traded in the United States. This company lost more than half its value as of end-August from the start of the year.

Job Cuts and the Outflow of Human Resources

At an August news conference announcing financial results, Son noted that the Vision Funds have invested in 473 companies and that he believes that one, two, or three of them will become companies like Alibaba or Arm in the future. The past, however, indicates that this is not so easy to achieve.

The planned IPO of Arm, a British semiconductor design company, has become the last hope for SBG. This IPO, however, is being shadowed by the weakening of stock prices and by the leveling off of demand for computers and smartphones. In addition, the US economy seems increasingly likely to slow from monetary tightening, and there are concerns that the demand for semiconductors will turn sluggish.

Son had intended to list Arm shares on Nasdaq and on the London Stock Exchange. The Financial Times has reported that this plan was suspended with the resignation of Prime Minister Boris Johnson, who had been pressing for a London listing. This may still serve as a tailwind for Son, who is aiming for the biggest listing in the semiconductor sector. Nasdaq, however, is trending downward due to growing concerns about a recession in the United States, and current conditions are not favorable for achieving a blockbuster IPO.

With the worsening of business results, Son has announced job cuts for the Vision Funds, stating that this was a painful decision in view of how large the organization has grown, its human resources, and the personal ties that have developed. He did not try to hide the difficult circumstances compelling the paring down of the human resources SBG has assembled.

In the last two years, nearly 10 senior officers have left the company, including Chief Operating Officer Marcelo Claure at the start of 2022. On August 31, Rajeev Misra, who oversaw the Vision Funds, stepped down as SBG executive vice president. In 2018, SBG appointed three executive vice presidents, who were seen as candidates to succeed Son. With the resignation of Misra, however, all three have now left SBG. The outflow of human resources has become a serious issue for the Japanese firm.

With regard to the situation SBG is facing, Son stated that he does not know how long the winter season will last and that, while listed stocks are also facing wintry conditions, such conditions are likely to last longer for unicorns. Having lost the magic wand of its Alibaba stock, SBG’s travails have just begun.

(Originally published in Japanese on September 15, 2022. Banner photo: Chairman and CEO Son Masayoshi of the SoftBank Group on August 8, 2022, at a Tokyo news conference on financial results, stands before a famous portrait of Tokugawa Ieyasu. © Jiji.)