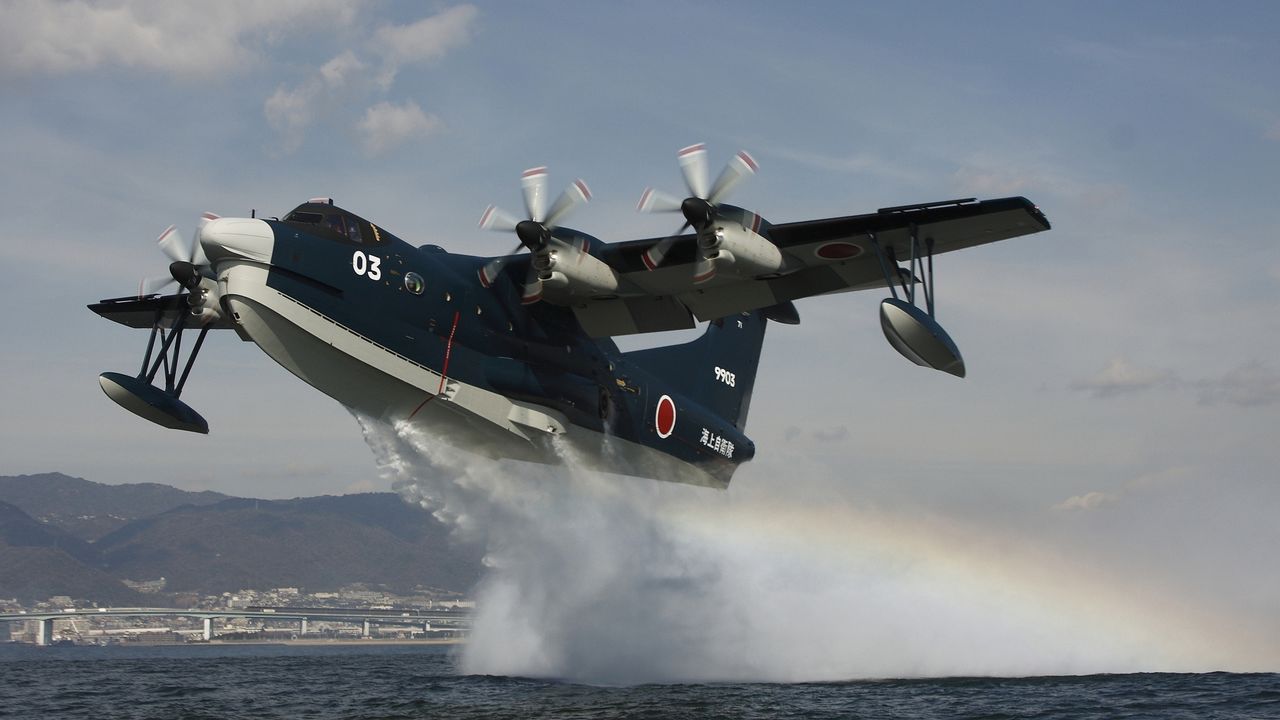 Politics Technology Oct 31, 2022
The ShinMaywa US-2, a Japanese amphibious aircraft configured for rescue operations at sea, is attracting increased worldwide attention. Why the sudden interest in this Maritime Self-Defense Force plane?

On April 6, 2022, Major General Eric T. Hill, deputy commander of the US Air Force Special Operations Command, visited Marine Corps Air Station Iwakuni in Yamaguchi Prefecture. The purpose of his visit was to witness the search, rescue, and personnel recovery capabilities of the Maritime Self-Defense Force’s US-2 amphibious aircraft. AFSOC published an article not long after quoting Hill as saying that the United States was “keen to learn” from the MSDF as it explored its own amphibious options, and that “their US-2’s amphibious aircraft is an incredible platform.”

Tanaka Katsuo, managing executive officer at ShinMaywa Industries, which built the plane, spoke about this visit and explained why the domestically produced US-2 likely piqued AFSOC’s interest. The US-2 has characteristics of both an airplane and a boat. Capable of terrestrial short takeoff and landings, it is also the only aircraft in the world that can take off and land in rough seas with wave heights of up to 3 meters. The lower fuselage of the plane is structured like the bottom of a ship and is modified with a “spray suppressor” and “spray strip” to mitigate splash damage to the airframe and engines. 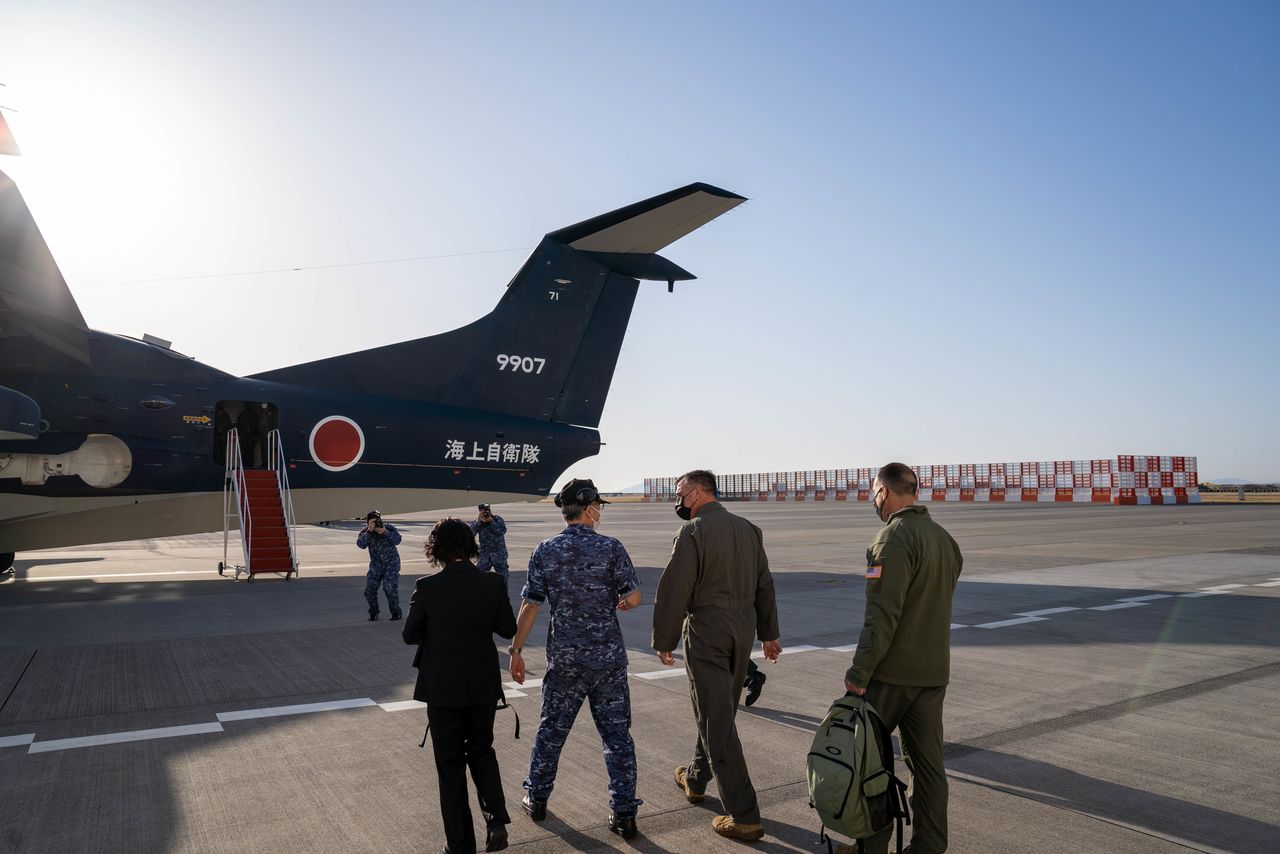 ShinMaywa’s strengths in amphibious aircraft technology were inherited from its predecessor, Kawanishi Aircraft Company. Kawanishi made a name for itself during the Pacific War by producing aircraft for the Imperial Japanese Navy. Kawanishi’s amphibious Type-2 flying boat (the H8K) and the floatplane fighter Shiden Kai (the N1K), known respectively as “Emily” and “George” by their adversaries, were highly regarded.

Tanaka explains: “The United States began manufacturing flying boats during World War II but stopped making them soon afterward, as land-based aircraft capabilities advanced. They retained possession of old seaplanes, but plans have recently emerged to convert existing transport aircraft into seaplanes. This is probably why the deputy commander visited Iwakuni to inspect the US-2.“

Specifically, AFSOC is thinking of converting the MC-130J “Commando” special operations and transport aircraft into a seaplane by attaching detachable floats. This was Hill’s second visit to observe the US-2, suggesting significant interest. Tanaka offered his own speculation: “When we analyzed the US military’s published materials in 2021, it was clear that their major area operations had shifted to Asia. Given that the Western Pacific region is more than 90 percent ocean, the documentation identified the need for equipment that could be used at sea and the development of amphibious aircraft. Therefore, what interests them about the US-2 is its ability to land at sea, especially given the US Air Force’s lack of experience in landing on water surfaces.”

A prototype model of an MC-130J with floats attached. (Courtesy of AFSOC)

Currently, a total of seven US-2s are deployed at MCAS Iwakuni and the MSDF’s Atsugi Air Base in Kanagawa Prefecture. Having taken over from its predecessor (the US-1) in 1976, the US-2 boasts an impressive record of over 1,000 people rescued. In June 2022, the US-2 rescued an American family of three after their vessel became unable to sail 770 kilometers off the main island of Okinawa.

The US-2’s remarkable capabilities are not limited to landing in rough seas. The plane requires only about one-quarter the takeoff and landing distance of a commercial airliner, eliminating the need for a long or specialized runway. This is one of the reasons why the US-2 can take off from and land on 261 of Japan’s many islands. The US-2 also has a range of approximately 4,700 kilometers—about 5.5 times that of a standard helicopter—and its cruising speed is approximately 480 km/h, about 1.8 times that of a helicopter. These capabilities allow for a wide range of expedited response and rescue operations. 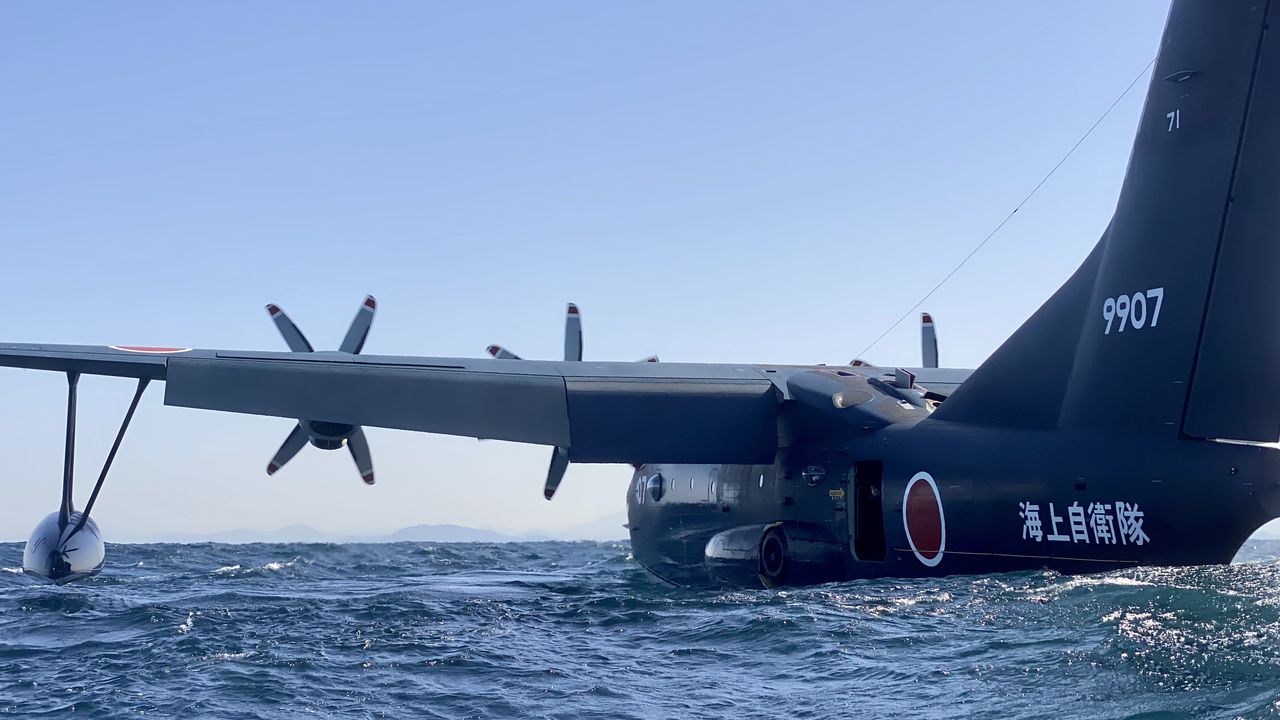 Although the US-2 has not been involved in rescue operations during combat to date, it is likely that it will be deployed during any kinetic conflict in East Asia, especially during a Taiwan contingency. Tanaka believes that Japan cannot avoid being involved in any situation that arises. “Whether due to unforeseen accidents or armed combat, people will need to be rescued during a regional conflict. The assumption is that an amphibious aircraft capable of air-sea rescue is essential. The US-2 will be needed.”

As the US-China rivalry deepens, American military analysts have run many simulations of what military conflict with China over Taiwan might look like. In early August 2022, when the Chinese military conducted large-scale military exercises during US House of Representatives Speaker Nancy Pelosi’s visit to Taiwan, a group of experts from the Center for Strategic and International Studies, a leading Washington DC–based think tank, conducted one such simulation. Premised on a war breaking out in 2026, the group drew up 22 potential US-China war scenarios. The sensational outcome was that, while an invasion of Taiwan would likely fail, the United States would suffer heavy casualties.

Bloomberg and other American media outlets reported that the US Navy and Air Force would lose 900 fighter and attack aircraft in four weeks of fighting—equivalent to nearly half of their combined fleets. Most of the US Navy’s surface vessels would also be sunk by Chinese missiles, while American and Taiwanese counterattacks would sink 150 Chinese vessels. Military experts agree that, with this much damage, rescue operations will become a major battlefield priority.

Since combat is expected to take place predominantly over the ocean and far-flung islands, two SDF rescue units will have crucial roles to play. One is the Air Rescue Wing of the Air Self-Defense Force, consisting mainly of helicopters, and the other is the MSDF’s Rescue Squadron, consisting of both helicopters and fixed-wing aircraft. Both units are, however, relatively small given that their originally envisioned role was to respond to peacetime accidents. Although helicopters can shuttle back and forth quickly to conduct rescues if the site is close enough to shore, their range is short and their carrying capacity is limited. This is where the US-2 comes in. It was originally designed to rescue the crews of crashed aircraft and can even carry a much higher number of people than the V-22 Osprey.

The MSDF currently only has seven US-2 aircraft, however. At any one time, a number of US-2s will also be undergoing routine inspections and repairs. Recent simulations show that the current fleet is insufficient to deal with rescue requirements stemming from the extensive damage expected to hundreds of military aircraft and naval vessels during a Taiwan conflict.

Military experts say that at least 20 to 30 rescue aircraft will be needed. Furthermore, the home bases for the MSDF’s US-2 fleet are Iwakuni and Atsugi. Both are on the main Japanese island of Honshū, and therefore too far away from locations where a Taiwan conflict is expected to play out. In anticipation of such a conflict, the Japanese government should consider establishing a base in close proximity to the Nansei Islands. 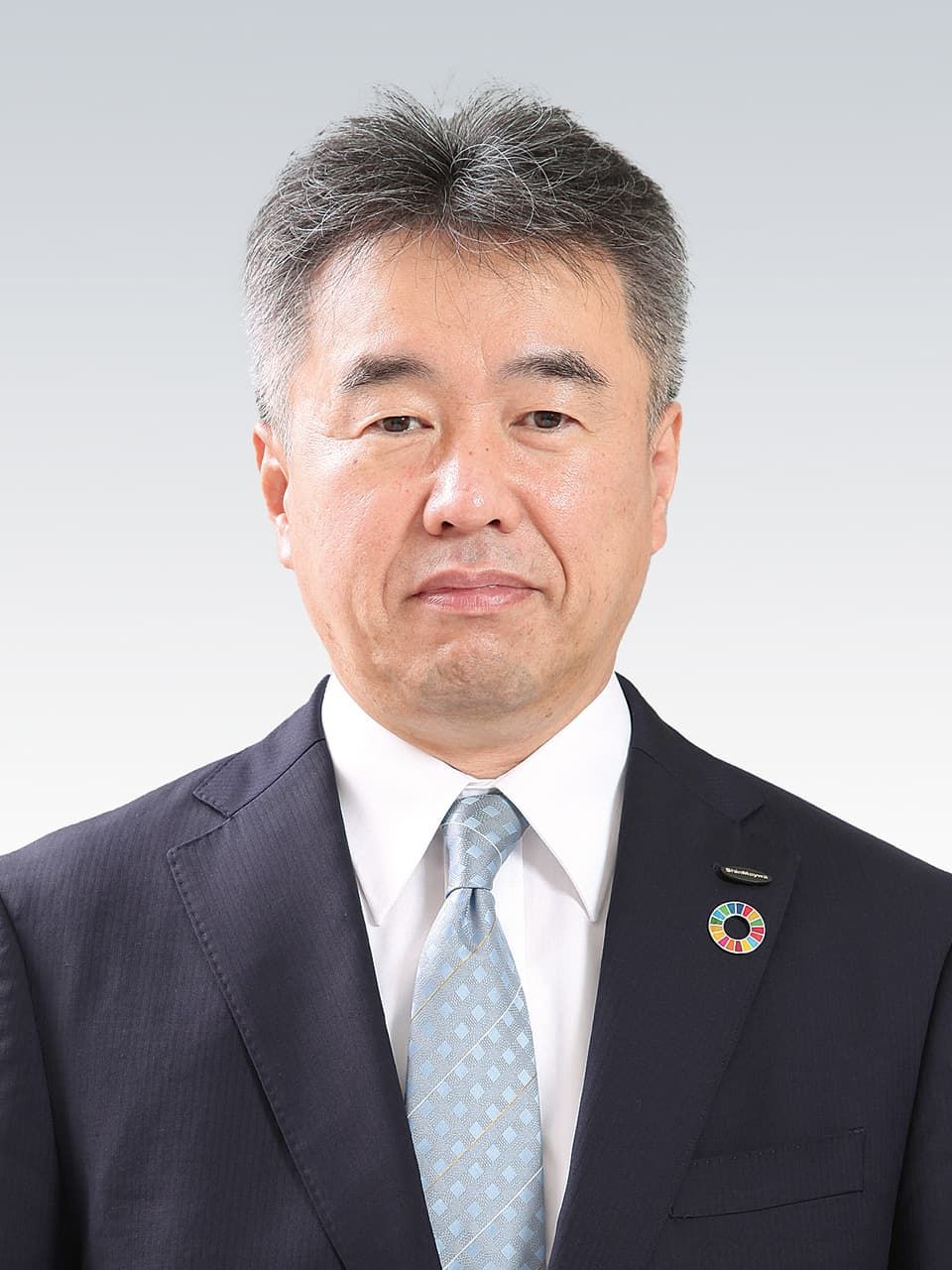 ShinMaywa’s Tanaka acknowledges these challenges: “If something were to happen around the Senkaku Islands or Taiwan, even aircraft would take too long to provide help from Iwakuni. We need to make arrangements to forward-deploy units and equipment in the field somewhere near the Nansei Islands.”

For Japan, it will be necessary to rethink past assumptions to enhance operations in cooperation with its allies. Japan will need to accept that, if a conflict arises in Taiwan or the Senkakus, the expectations of its allies will become even greater.

However, even if Tokyo wants to increase the number of aircraft, the price tag is a major barrier: Japan’s 2021 budget shows that one US-2 aircraft costs about ¥13.9 billion. This is considerably higher than the approximately ¥10 billion per unit cost for the ASDF’s F-35A fighter. Cost reduction may be difficult to realize, also. Only nine US-2 units have been built over the last 20 years, limiting the cost efficiency benefits from scale.

Prime Minister Abe Shinzō’s administration formulated the Three Principles on Transfer of Defense Equipment and Technology in 2014. These new rules loosened the previously tight restrictions on Japanese companies exporting military equipment overseas. The US-2 was assumed to be the prime candidate for export. The public and private sectors attempted to sell the platform to other countries, attracting India’s interest at one point. However, due to price and domestic production offset reqirements, a deal could not be finalized.

Given these barriers to exporting the US-2, ShinMaywa is envisioning a new role for the aircraft. The company has drawn up plans to convert the US-2 into a firefighting amphibious platform for export and begun exploring ways to expand sales. Tanaka notes: “Climate change has resulted in the scale of wildfires increasing throughout the world. Overseas, helicopters have for some time been a mainstay in aerial firefighting. As the scale of wildfires increases, the need for firefighting aircraft capable of discharging larger volumes of water also increases. We are receiving increasing numbers of inquiries about using the US-2 as a firefighting aircraft.”

In recent years, massive wildfires have occurred in many parts of the world, including the United States, Russia, Turkey, Algeria, and Brazil. In California alone, the total area of forests destroyed by wildfires in 2020 and 2021 broke records. In 2021, 1 million hectares were destroyed by wildfires—roughly an area the size of Aomori Prefecture. In Russia, the area destroyed by natural fires increased every year from 2018 onwards before reaching a record 19 million hectares in 2021. This is equivalent to the size of Syria and more than twice the land area of Hokkaidō.

In Turkey, more than 250 wildfires broke out in July 2021 alone as local authorities struggled for two weeks to extinguish them. In Greece, more than 150 wildfires broke out in August 2020. Many people were forced to evacuate their homes during the worst heat wave on record as temperatures consistently exceeded 40° Celsius. In Spain, wildfires in 2022 destroyed about 250,000 hectares of land, an area larger than Tokyo.

As Tanaka points out, “Just as Japan receives various kinds of help from overseas when a disaster strikes, we need to be willing to return the favor. We can demonstrate the spirit of mutual aid by helping those in need in disaster zones overseas. It’s very much in our national interest if the US-2 is used as an amphibious firefighter. We believe that the US-2 will help Japan make enhanced international contributions.”

Both tensions in East Asia and the scale of wildfires around the world are burgeoning and likely to persist. Will the US-2 become a fixture in addressing these problems in the future?