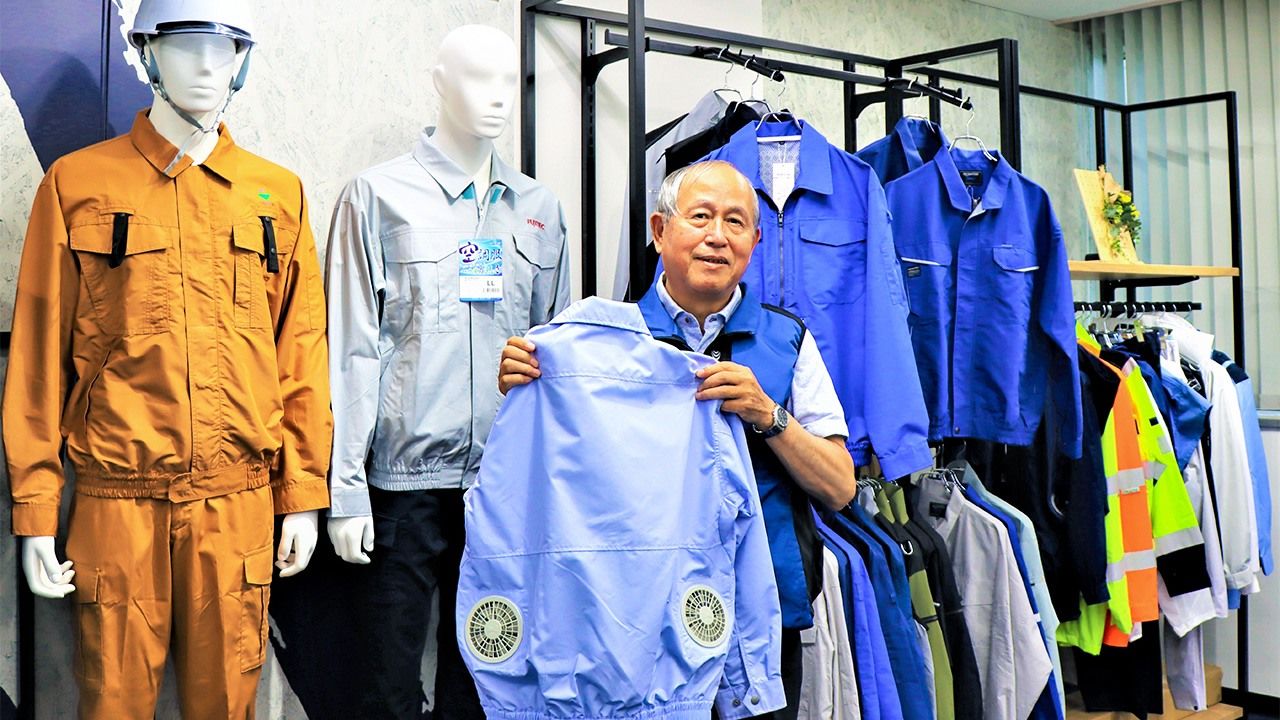 Technology Economy Nov 16, 2022
Climate change is confronting us with more blazing-hot summer days each year. Commonly seen on the streets of Japan during these hot months are puffed-out jackets equipped with fans to cool the wearer. Since it hit the market in 2004, this “air-conditioned clothing” has become vital to people working outdoors; now the tech is making its way into sportswear and fashion gear as well.

When the human brain senses that the temperature is hot, it instructs the sweat glands to secrete sweat, which cools the body as it vaporizes. This perspiration is the body’s natural cooling mechanism. Air-conditioned clothing, today commonly seen on Japan’s streets during the hot summer months, maximizes this cooling effect. The rear of the clothing is fitted with two tiny fans that draw air inside, blowing it across the body surface to instantaneously evaporate sweat. 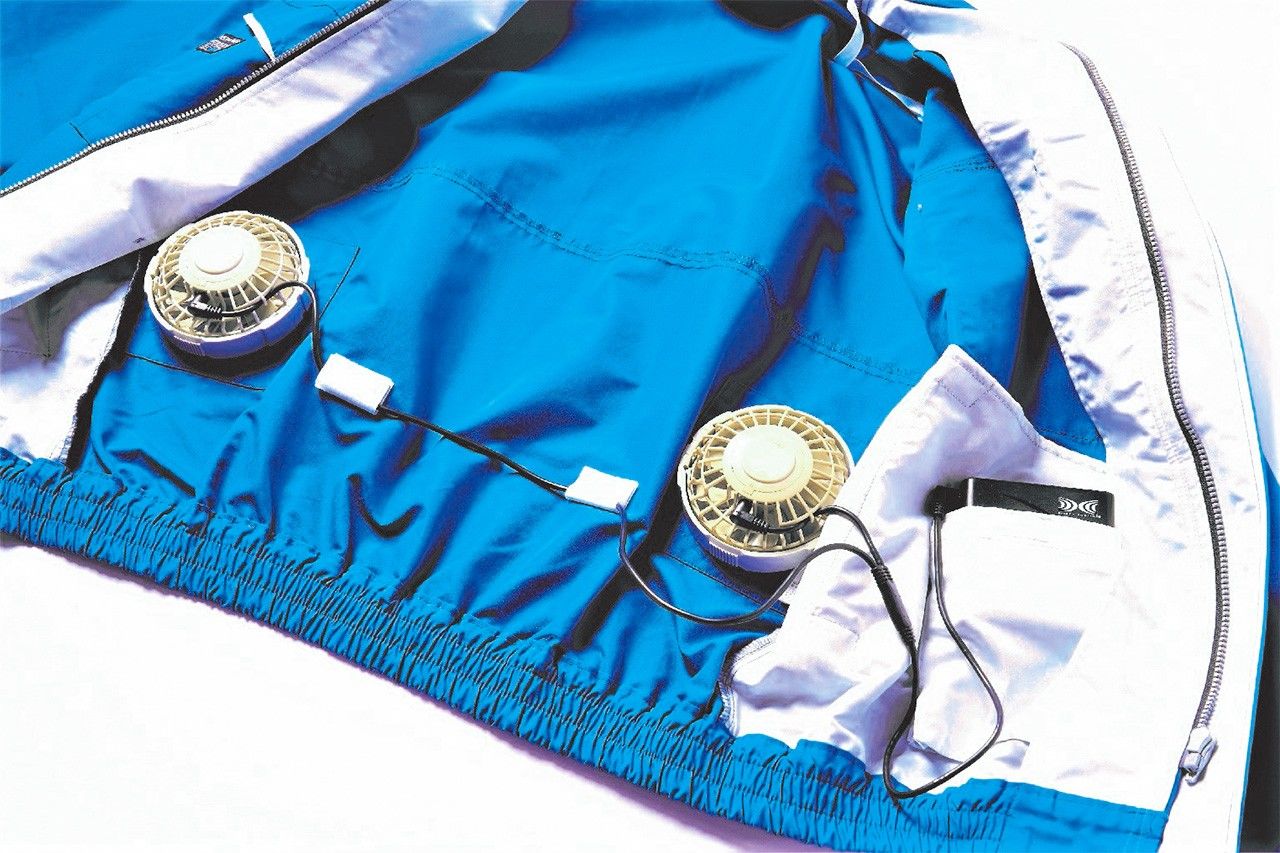 The internal structure of air-conditioned clothing. An inside pocket carries a rechargeable battery pack that powers the two fans. (Courtesy of Kūchōfuku KK) 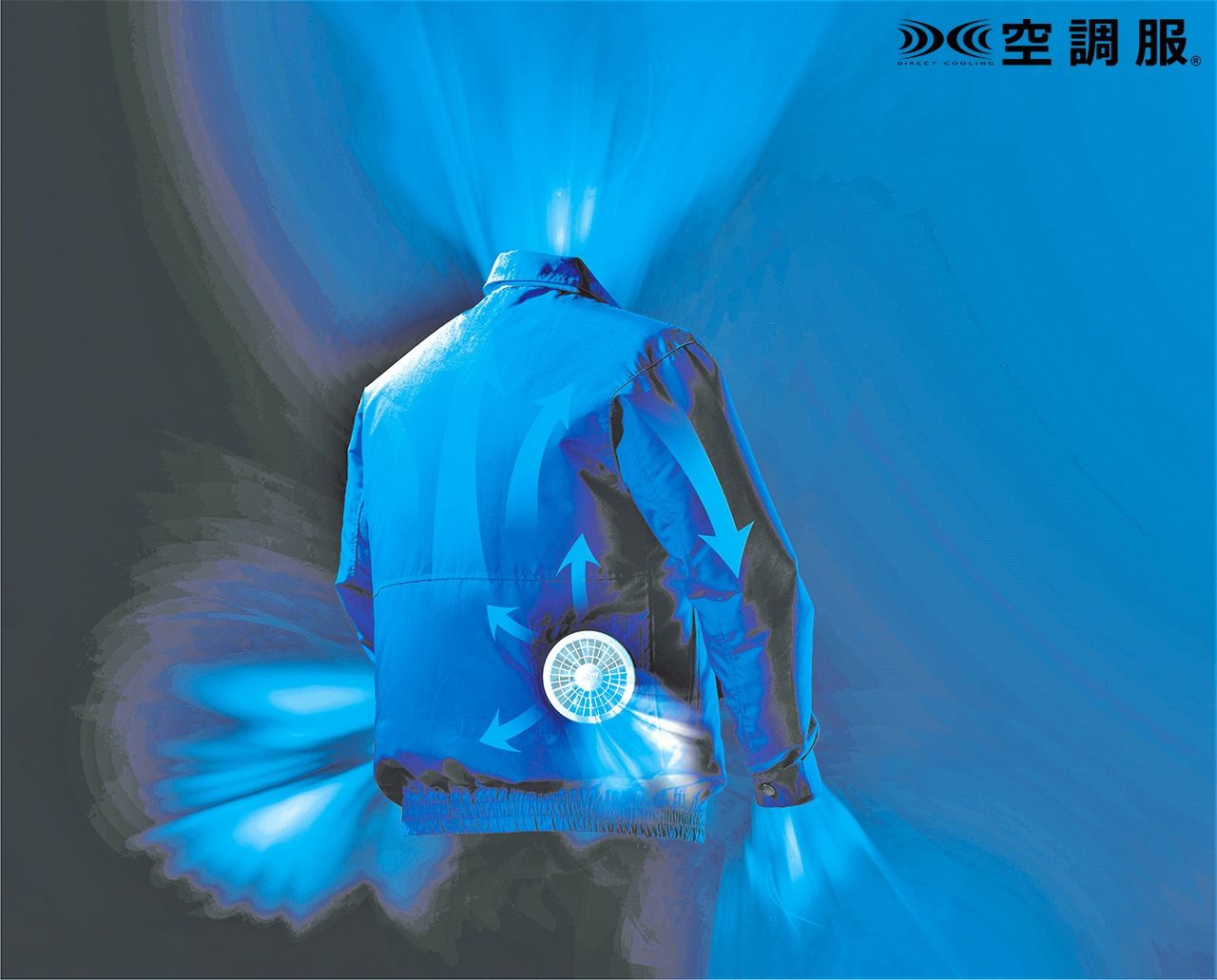 Outside air is drawn into the clothing, helping sweat to evaporate, before passing out from the collar and cuffs. (Courtesy of Kūchōfuku KK)

A thermographic image of the effect. The red portions of the image indicate higher temperatures. After 10 minutes with the fan switched off (left), the wearer is uncomfortably hot. Switching the fan on for 10 minutes (right) cools the body considerably. (Courtesy of Kūchōfuku KK)

Some ideas that seem eccentric at first are straightforward once you understand the mechanism. But even after air-conditioned clothing was produced commercially, the maker, Kūchōfuku KK, faced many hurdles until it gained widespread recognition.

The inspiration for the clothing dates back almost 30 years, to 1994.

In the words of the inventor, Kūchōfuku Chairman Ichigaya Hiroshi, “Around that time, I was making equipment to measure cathode-ray tube image quality for television plants, visiting Southeast Asia for sales. Thailand and Malaysia were experiencing a large-scale building construction boom, and what I saw there got me thinking. It occurred to me that the amount of power needed to cool such buildings must be extraordinary. I wondered if it was possible to invent cooling equipment that did not produce greenhouse gases.”

Ichigaya was 47 years old at the time. It was three years after he launched his own start-up, having retired early from Sony. Although he was producing healthy results, he was concerned about his future.

A Lesson from a Giant

“I cannot do what other people can, but I can do what they cannot.”

These were the words that Ichigaya wrote on the response sheet for the Sony corporate entrance examination. He actually committed a serious error in his exam, writing his responses one line below the correct one. But when he was grilled about this by the interviewer, he spoke eloquently about why a mirror shows a reverse image.

“Since my childhood, I ‘d been full of curiosity. I wondered why a packet of candy grew lighter as it emptied, but this wasn’t the case with batteries. As a child, I would ponder such matters deeply.”

In the later years of elementary school, he frequented the “electronic town” of Akihabara, Tokyo’s district home to countless stores dealing in electronics and components, and built his own microscope and telescope. The latter was a simple device: a roll of cardboard with a lens jammed in one end. The device was unique, made with a single objective lens, substituting “naked eye” capability for the eyepiece lens.

Ichigaya was deeply moved when he saw the Sony Trinitron color television at the Sony Building in Ginza, leading him to study engineering at Waseda University and join Sony after graduation. There, he came under the tutelage of the extraordinary genius of Sony cofounder Ibuka Masaru.

His fondest memory from this time was his entry in the company’s invention contest: a flute that used light from a CRT as its sound source. Although it was not commercialized, the praise he received from Ibuka at that time provided the inventor with encouragement after he launched his start-up.

After careful consideration, Ichigaya struck upon the key concept to realize an energy-efficient cooling mechanism—the use of water. His idea was sparked by the uchimizu Japanese tradition of splashing water on the ground for cooling.

He realized that, aside from splashing water, most existing cooling systems use the power of vaporization—everything from hand-held fans and electric fans to air conditioners, refrigerators, and even atomic reactors. The difference is in what they use as a coolant. Fans rely on our sweat, home appliances use alternative CFCs and other compounds made for refrigerants, and atomic reactors use river or sea water.

His thoughts then turned to water-refrigerated coolers, and he decided to experiment in a small space, creating a dog kennel. At this point, he realized there was no need to cool the entire space—cooling just people was enough.

Testing on the Train

He soon designed clothing fitted with a water-refrigerated cooler. It featured a tank of water with an extractor pump and piping that removed heat through evaporation of water, and used a fan to provide air flow. Ichigaya wore the clothing on trains, carrying an “Experiment in Progress” sign. 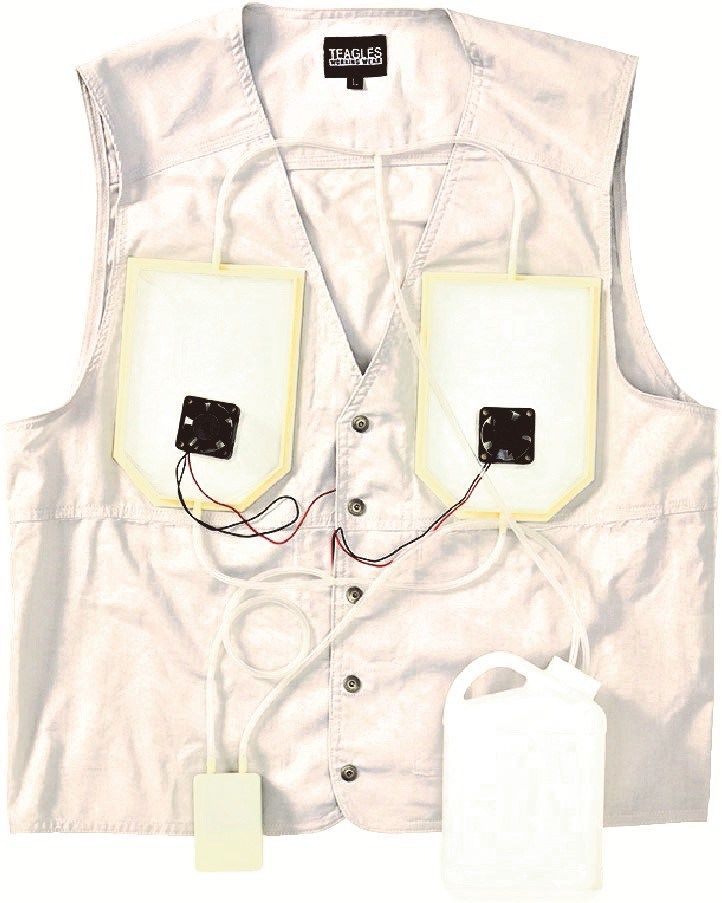 Ichigaya’s 1999 model, the first prototype for his air-conditioned clothing. Water was delivered to filters in the chest, while fans provided air flow. (Courtesy of Kūchōfuku KK)

“Fellow passengers thought I was a weirdo and gave me strange looks,” recalls Ichigaya. “My daughter, who was then in high school ,happened to be on the train with me one day. She told me I was an embarrassment and pleaded with me to stop,” he laughs.

The water tank was quite heavy, and it leaked. In cool conditions, the device worked too well, chilling the wearer, but the effect was limited when it was too hot. It was a total failure.

As he contemplated how to resolve the leaking, he had a flash of genius. “I realized there was no need to use water, because the human body has its own ‘water splashing’ function—producing sweat when it’s hot. I thought it should be possible to keep the body at the right temperature using a fan to evaporate sweat.” 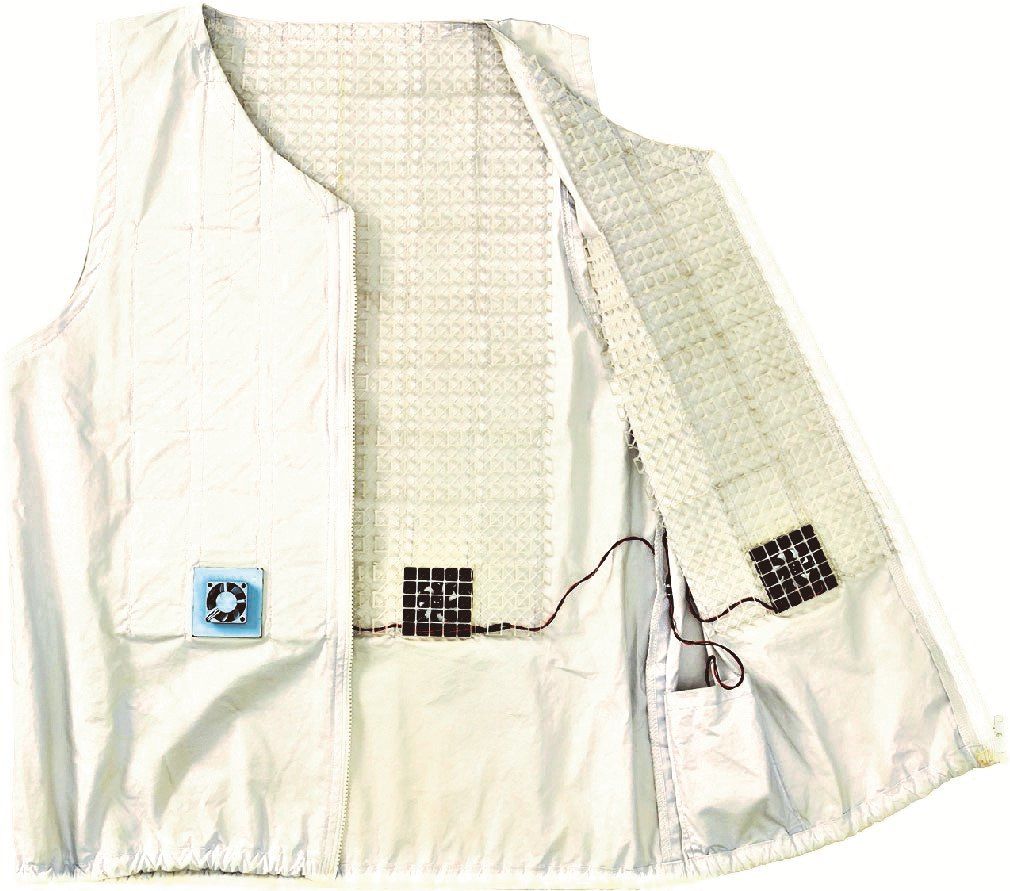 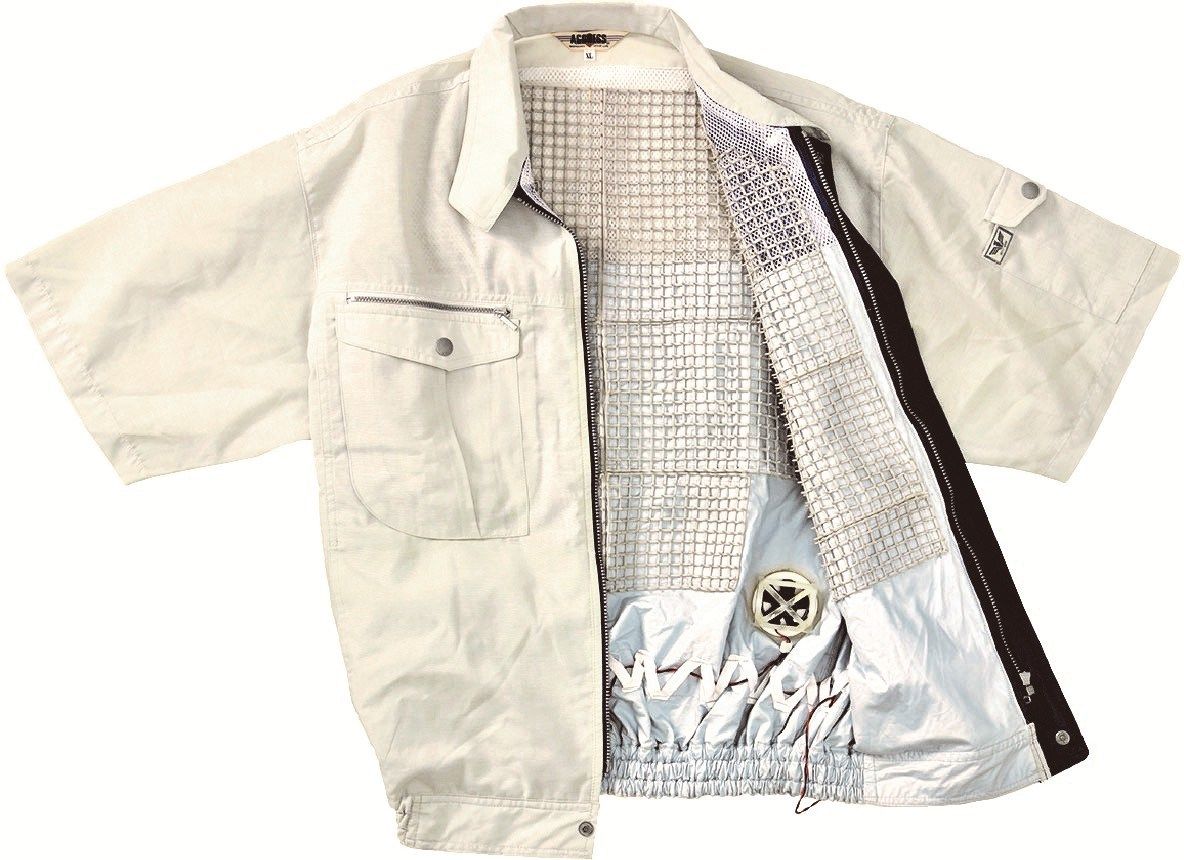 In the 2002 model, spacing mesh was fitted on the interior to keep the material from adhering to the body and improve air flow. (Courtesy of Kūchōfuku KK)

Sales of air-conditioned clothing began in 2004, six years after Ichigaya started his experiments. But sales were sluggish, at around 10,000 pieces a year.

“It was a product without precedent, so there was nothing for consumers to compare it to. Most importantly, the average person just couldn’t comprehend wearing a jacket in the heat.”

In Ichigaya’s thinking, though, “the proof is in the pudding.” If people would just give his jacket a try, they would recognize its benefits. But its appearance proved a bigger drawback than expected. 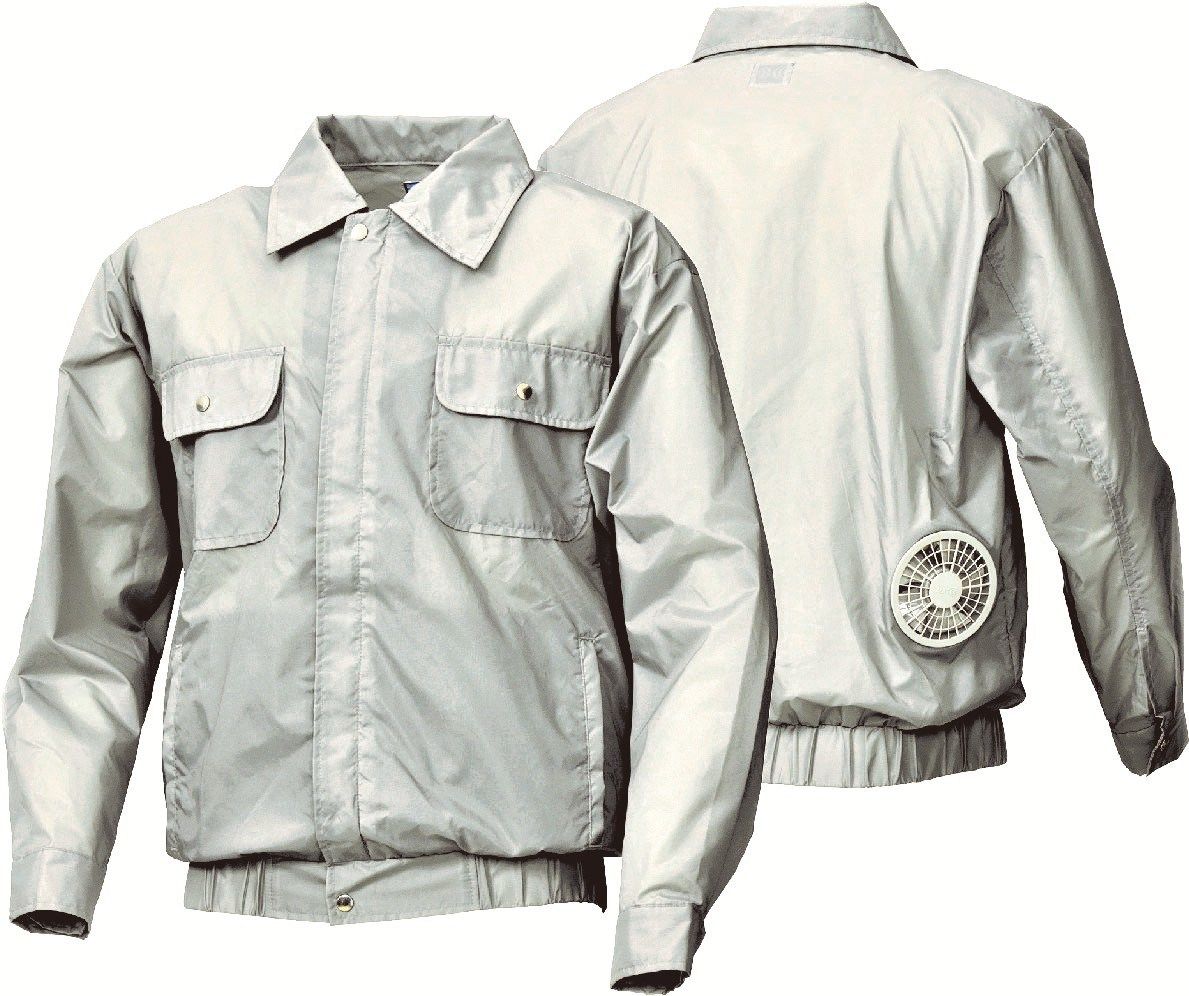 In 2004 Ichigaya released the first commercially available model, enlarging the fan units on the advice of his son, Tōru. In a reversal of the earlier version, it sucked air in. (Courtesy of Kūchōfuku KK)

At the same time, though, his new business was in trouble.

CRT measuring equipment was a high-priced product, costing ¥5 million per unit. In that industry he could make do selling three to five units a month. But air-conditioned clothing, at ¥10,000 a piece, was not so rosy. Faced with a cash-flow crisis, even digging into his own finances proved too little, too late. The banks refused additional funding. In the back of his mind, he feared bankruptcy.

One day, though, the company call-center fielded a complaint he will never forget. “Are you trying to kill my husband?” was the opening remark of the caller. She said he had bought three pieces of air-conditioned clothing, but all of them suffered a breakdown during use on the work site. (At the time, numerous units were breaking down when the power cable frayed inside the jacket.)

The information was conveyed to Ichigaya, who phoned the woman’s husband to apologize. He explained how he too had experienced the ordeal of the fans suddenly failing under the hot sun.

Upon hearing this, the man, in turn, thanked Ichigaya and encouraged him.

With this comment, Ichigaya realized there were many people who needed air-conditioned clothing, and he felt compelled to meet their needs. He worked on improvements with Kurumizawa Takeo, the company’s director in charge of technology. In their endeavors, they delved into even the minutest details. 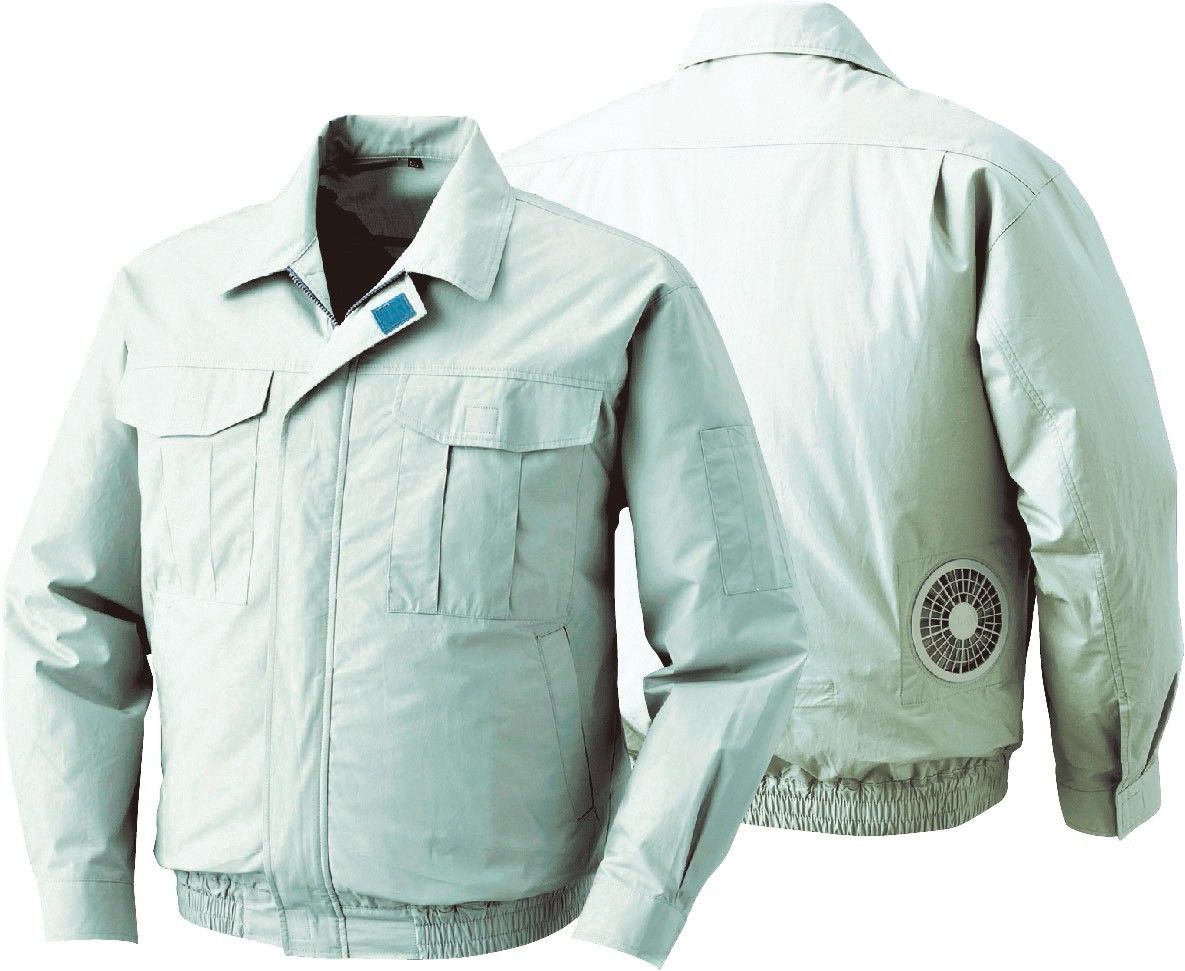 The 2005 model was the first to use the current design. Improvements were made to fan installation. (Courtesy of Kūchōfuku KK)

In 2011, they were finally back on track. They resolved issues with the batteries, manufacturing lithium-ion batteries at their Chinese plant to use instead of dry-cell batteries, thereby increasing operating time and air flow significantly. Their reputation spread among construction workers throughout Japan, by word of mouth and online. From 2012, the company saw sales double each year, reaching 1.2 million pieces in 2019, worth ¥5.7 billion.

More recently, Kūchōfuku has been producing clothing in collaboration with a well-known fashion label. Use is no longer limited to construction workers; the jackets now have fans among athletes and campers. Rival products have appeared on the market, and the air-conditioned clothing industry is today worth ¥20 billion. 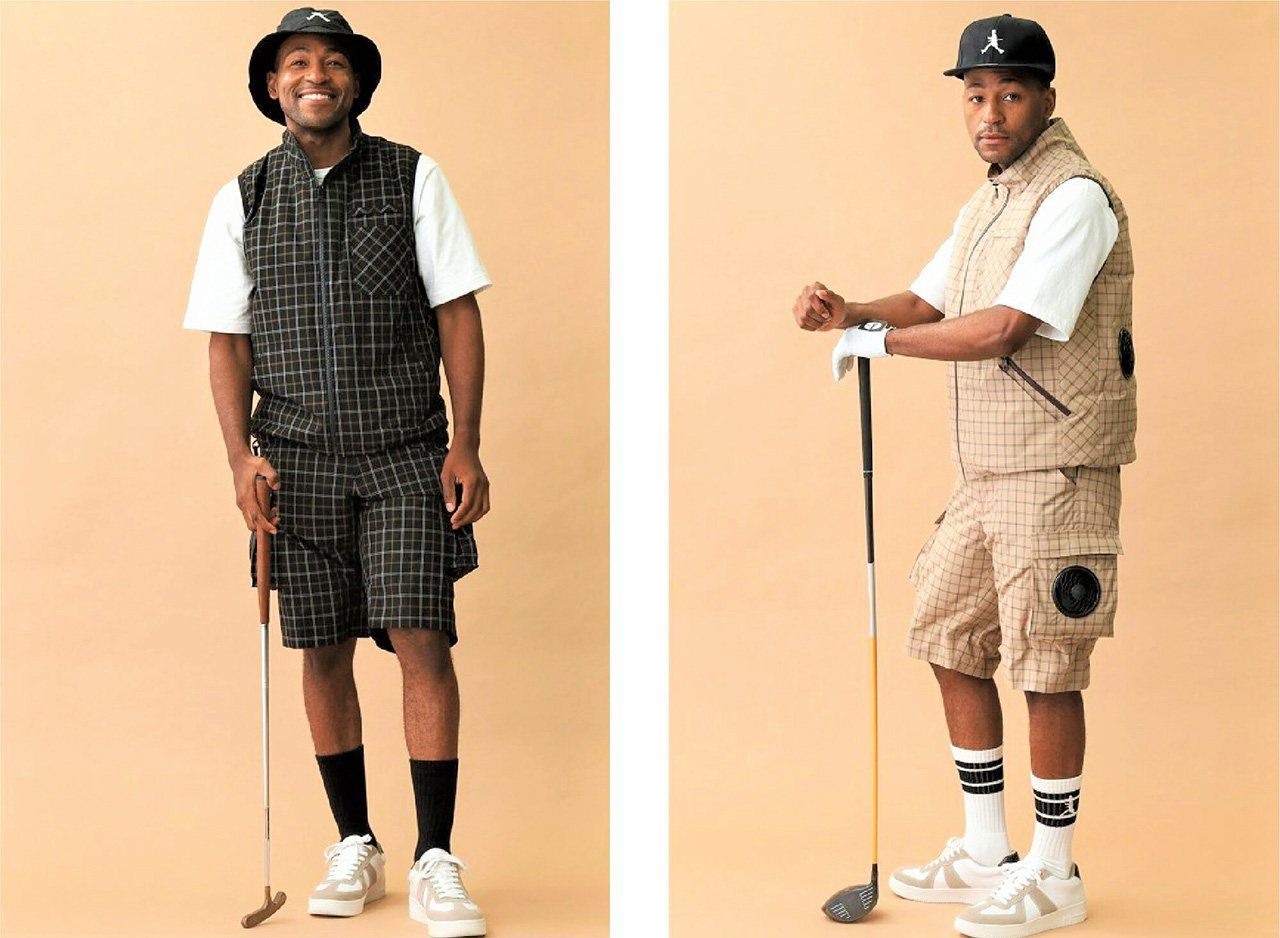 In August 2022, Kūchōfuku released menswear suitable for golf and other leisure activities, produced in collaboration with Takeo Kikuchi. (Courtesy of Kūchōfuku KK) 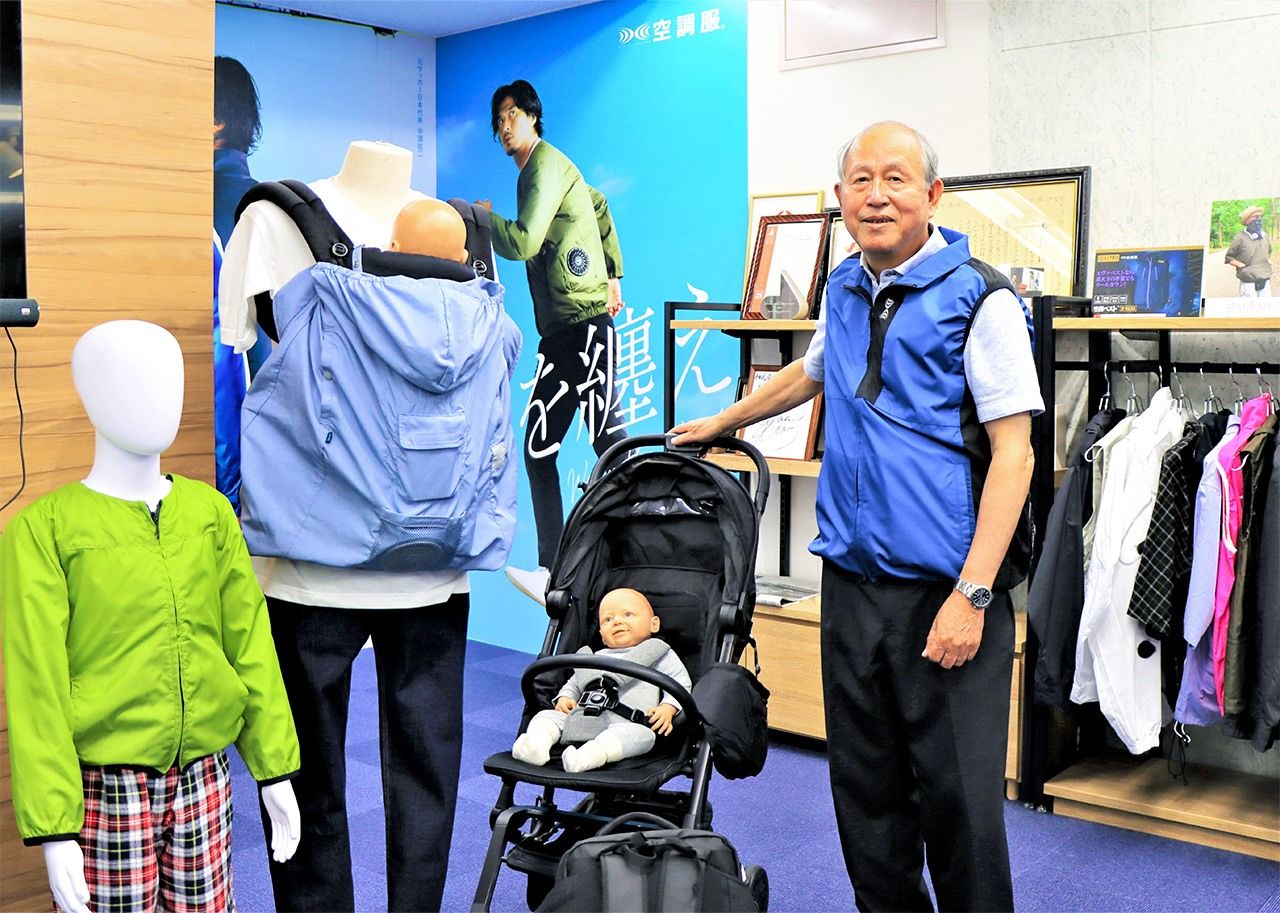 The firm has expanded its range, with the development of prams, backpacks, cushions, beds, and other products incorporating cooling mechanisms. (© Amano Hisaki)

Born from a Foolish Notion

For Ichigaya, the words of Ibuka Masaru ring true: “Innovation is born when we treasure our foolish notions.”

The story of Ichigaya’s invention shows how air-conditioned clothing is the embodiment of such a philosophy. It is the product of over 20 years of persistent deliberation.

But Ichigaya believes that air-conditioned clothing is not yet perfected—it is still under development. He claims to have many more ideas that he is not yet in a position to discuss. Taking his business to global markets is one of his next challenges.

“I plan to treasure my instincts and keep coming up with new ideas. I doubt I would have hit upon the idea of air-conditioned clothing if I’d been a specialist in air conditioning or clothing. I don’t start with the notion of ‘This is something I could do.’ Instead, I think, ‘It’d be great if we had something like that!’ and ask I also treasure the curiosity that makes me ask, ‘Why is it like this?’ I hope to build on this drive to invent many more products in the future.”