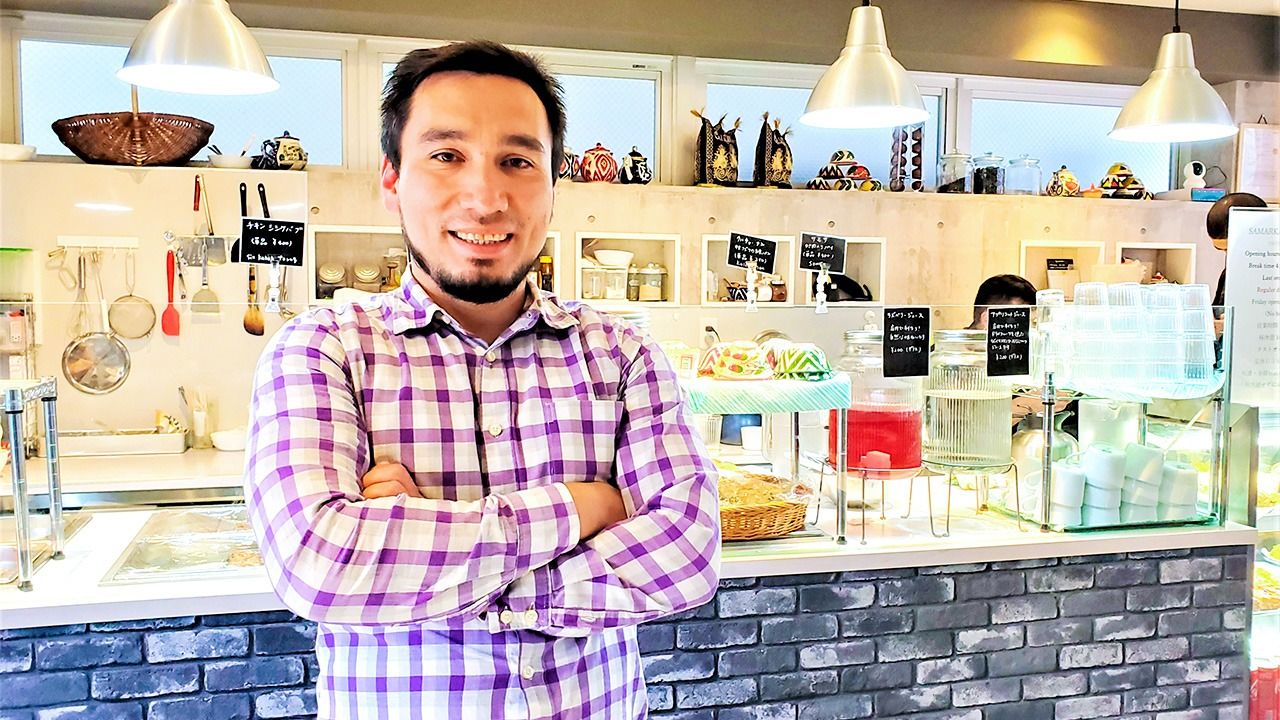 Food and Drink Culture Global Exchange Jan 6, 2023
In a cluster of East Asian restaurants near Takadanobaba Station in Shinjuku stands a lone shop specializing in the cuisine of Uzbekistan, a nation and culture still largely unknown in Japan. Owner Arzikulov Akmal serves up dishes like plov, a rice dish considered the national food of his homeland, with the hopes of introducing Uzbekistan to all.

The area around Takadanobaba station is one rich in international flavor. The businesses filling the ACN Takadanobaba Building are a fascinating snapshot of the neighborhood.

The first basement floor holds one of the area’s many Burmese cafes, and there is a Chinese grocer on the first. Then there is the third floor, which is lined with diverse restaurants from all over Asia, including one that excites my curiosity in particular: Samarkand Terrace, an Uzbek restaurant that opened last fall.

I wonder what most people think of when they hear the name Uzbekistan. Personally, all I know about it is that it stands on the old Silk Road, and was once part of the Soviet Union. Which is next to nothing, really.

When I admit to this, shop owner Arzikulov Akmal just gives a quiet laugh.

“Uzbekistan isn’t that well known in Japan. I opened this place because I wanted people to know more about it.”

Akmal came to Japan in 2011 as an exchange student to study finance, but he says he never had any particular interest in Japan itself.

“Most students in Uzbekistan go abroad for continuing study after university, so I just went with the flow and enrolled in graduate school at Tokyo International University. There wasn’t any real reason for the choice. I got into grad school in Korea, too, but I happened to know someone in Japan, so I decided I’d come here.” 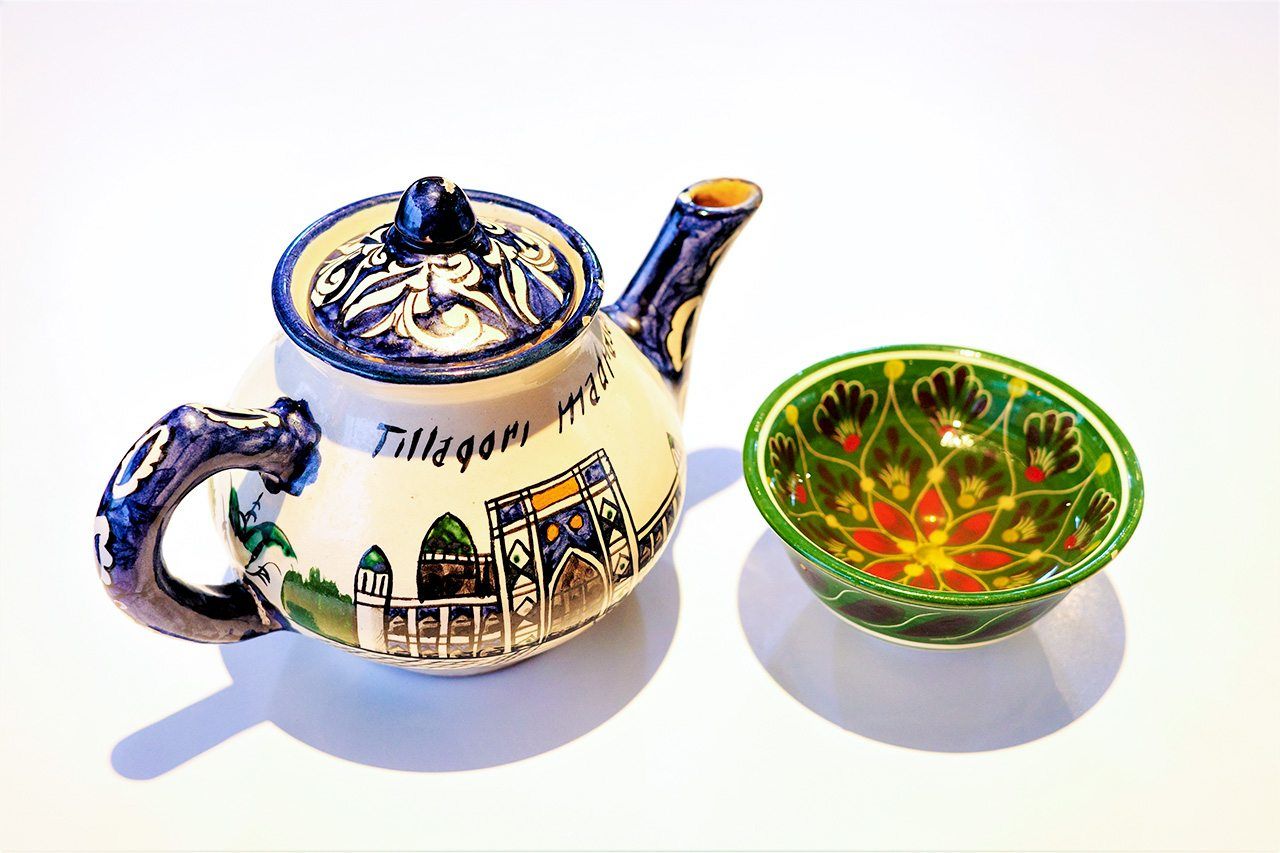 All the teacups and pots in the shop are imported from Uzbekistan.

Strangely enough, the inspiration to open this shop was another connection to Korea.

“I took a trip to Korea five years ago, and in Seoul there was a ‘Little Uzbekistan’ neighborhood full of restaurants serving food from home. I thought about how nice it would be to have restaurants like that in Japan, and from there I just figured I’d do it myself. That’s when I started getting ready for this.”

But why does Seoul have that Little Uzbekistan? Akmal explains the complicated history behind it.

He says that back in the days of the Russian Empire, a community of Koreans settled in the Primorskaya Oblast, a region of Russia near the border with what is now North Korea. But when Japan conquered the Korean peninsula in the 1920s, Soviet leader Joseph Stalin forced those Korean emigrants to move to Central Asia out of fears they would spy for Japan. Even today, there are 200,000 ethnic Koreans living in Uzbekistan calling themselves Koryo-saram, the traditional name such Koreans in former Soviet states use for themselves. The ties to Korea, then, are very deep indeed.

I feel that the world is still so big, and there is so much we do not know.

Trials of the Pandemic

Samarkand Terrace, named after the ancient city on the Silk Road that is also Akmal’s hometown, had a rocky road on the way to its opening.

Just as preparations got going in earnest, the global COVID-19 pandemic struck and sent the whole restaurant industry into a tailspin. Akmal, though, has a strong streak of optimism and never even flirted with the idea of canceling his plans.

“The pandemic has certainly been rough, but empty shop spaces started popping up all over the place, so that was handy for opening up a new restaurant,” he says, looking back on those days.

He eventually saw a good spot open up in Takadanobaba, an area where both other Muslims and his fellow Uzbeks gather. It was on the third floor of a new building with a lovely terrace view of the Kanda River. He found he liked the pleasantly breezy location. 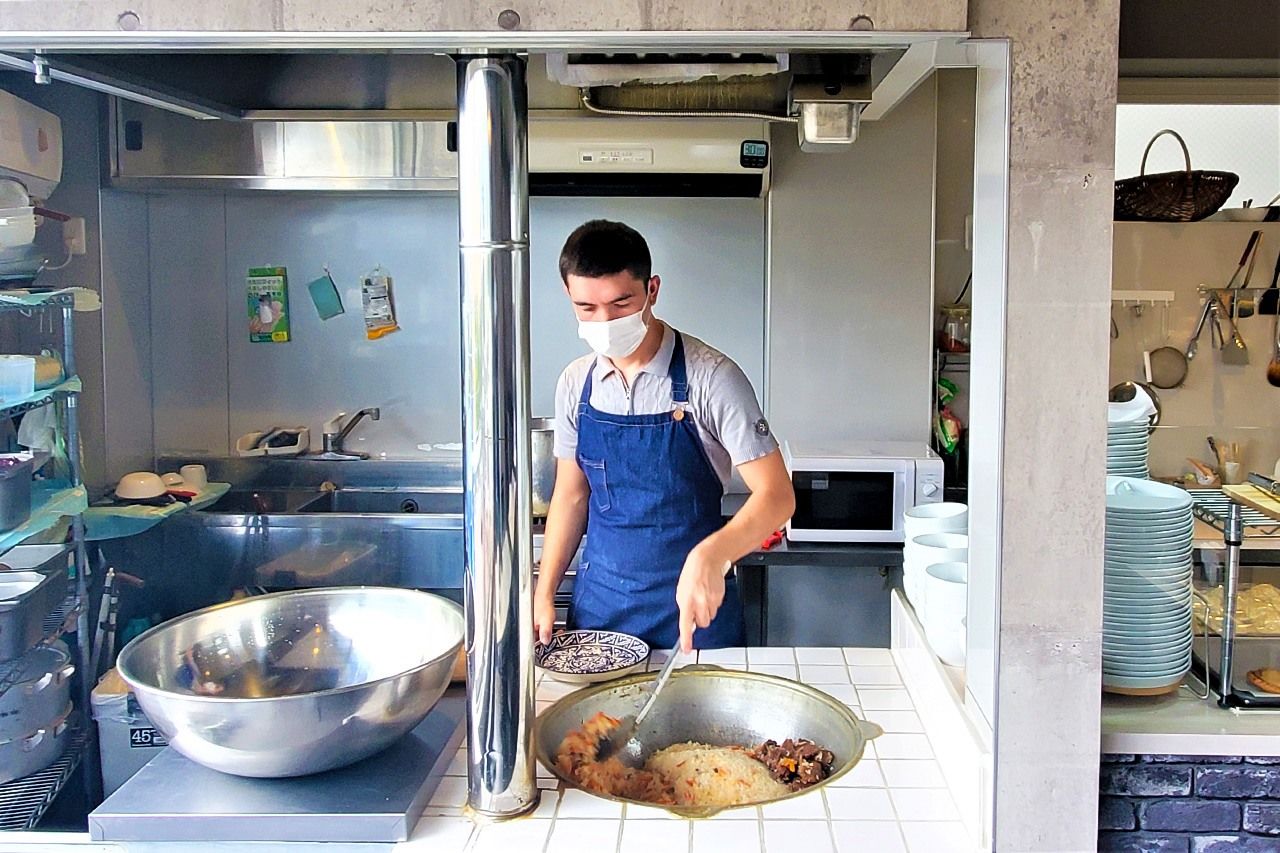 One corner of the shop features a large pot imported from Uzbekistan fitted to a uniquely shaped stove built with painstaking care.

With the location fixed, it was time to get ready to open. Sadly, though, he missed his planned opening day. The problem this time was that the special stove wasn’t finished.

Uzbekistan’s national dish is a kind of rice pilaf called plov. Akmal decided to make this dish, one rich in regional variety and a staple at large banquets, his signature. He wants everyone in Japan to know the dish, but recreating that truly authentic flavor requires a special stove. He struggled to find someone with the skills to build one.

“I had decided to order a large pot with a capacity to make seventy servings at once, and to invite over a master cook who once made a Guinness World Record eight tons of plov at once. But we couldn’t do anything without the stove.”

Akmal was at a total loss, but he finally got some good news.

“I heard that a fellow Uzbek who was now working in remodeling in Japan had built plov stoves back home.”

He contacted the specialist with his order, and finally got his authentic stove. A month later than planned, Samarkand Terrace finally opened.

Too Much to Try

When I visited the shop, he was just finishing up a big batch of plov. The rice glistened with the flaxseed oil particular to the Samarkand version. 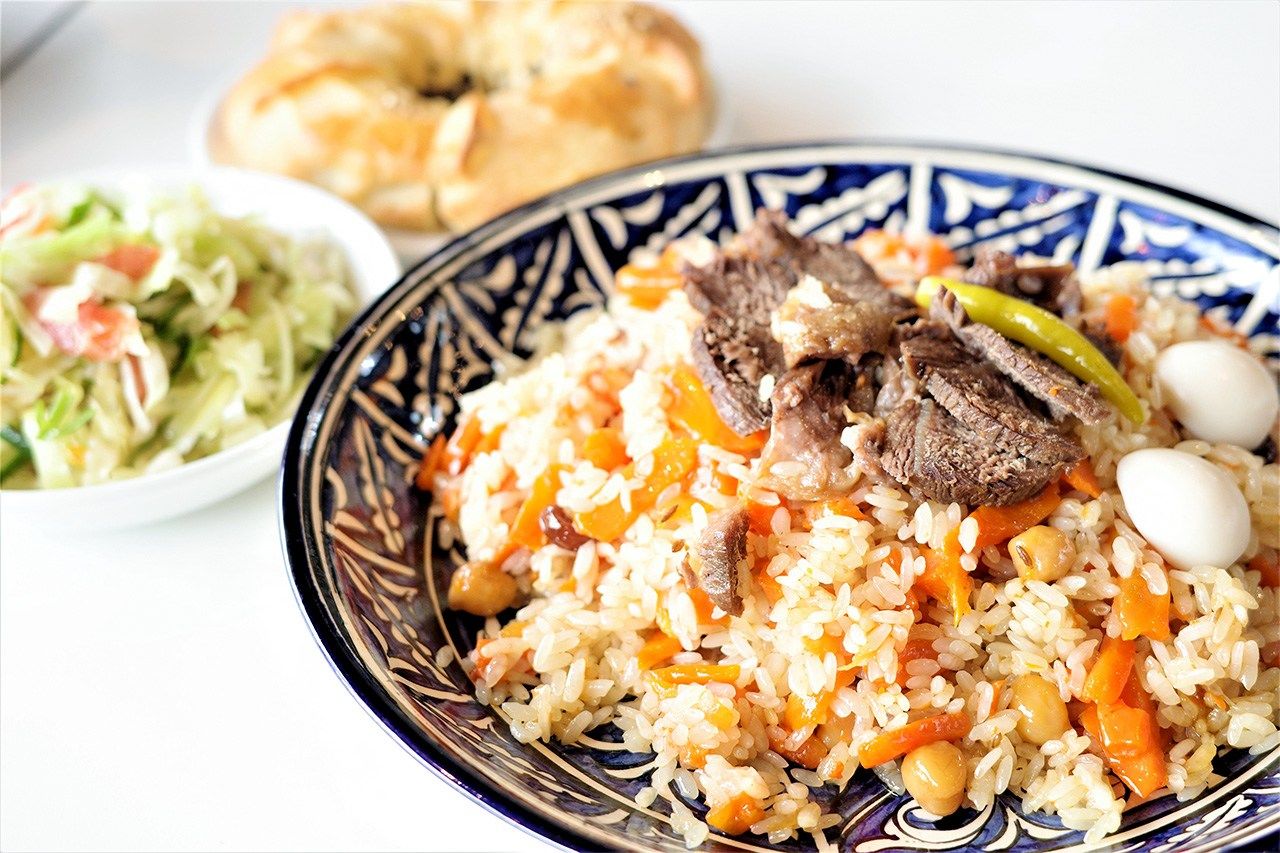 The plov at Samarkand Terrace is a symbol of Akmal’s concern for detail. It’s already become a hit with diners.

Plov is a rice pilaf full of tender lamb meat, quail’s eggs, carrots, chickpeas, and raisins. Surprisingly, the star of the show tends to be the carrots. The cook simmers huge amounts of carrots in the pot for two to three hours, releasing all of the natural sweetness to seep into the other ingredients.

That pure carrot sweetness is hard to find in other dishes, so it’s no surprise that the restaurant is seeing lots of Japanese regulars coming in. Akmal recommended I mix in some yogurt, and the way that its sour flavor accentuated the carroty sweetness kept my spoon moving.

Once I was filled up with plov, it was time for tea.

Samarkand Terrace offers more than just meals. It has full tea service, as well. It seems every street corner in Uzbekistan has a tea shop, or chaikhana, where people sit and relax over cups of green tea.

Akmal’s focus on authenticity of both flavor and atmosphere drove him to import colorful teacups and pots from his home to help recreate a true chaikhana experience in Takadanobaba. Naturally, the desserts are also handmade.

Samarkand Terrace is on its way to becoming one of Takadanobaba’s more popular spots. At the same time, Akmal is actually working on opening up other businesses along with it. He is working on opening a Japanese language school in his hometown of Samarkand, and helping develop halal dietary supplements to help ease diabetes. “There’s too much I want to do, and not enough time,” he says with a grimace, but he remains upbeat. That might be because his goal of making Uzbekistan better known in Japan through his restaurant is slowly coming true.

For now, the pleasant breezes still blow through Samarkand Terrace, carrying off the comforting, sweet scent of plov. 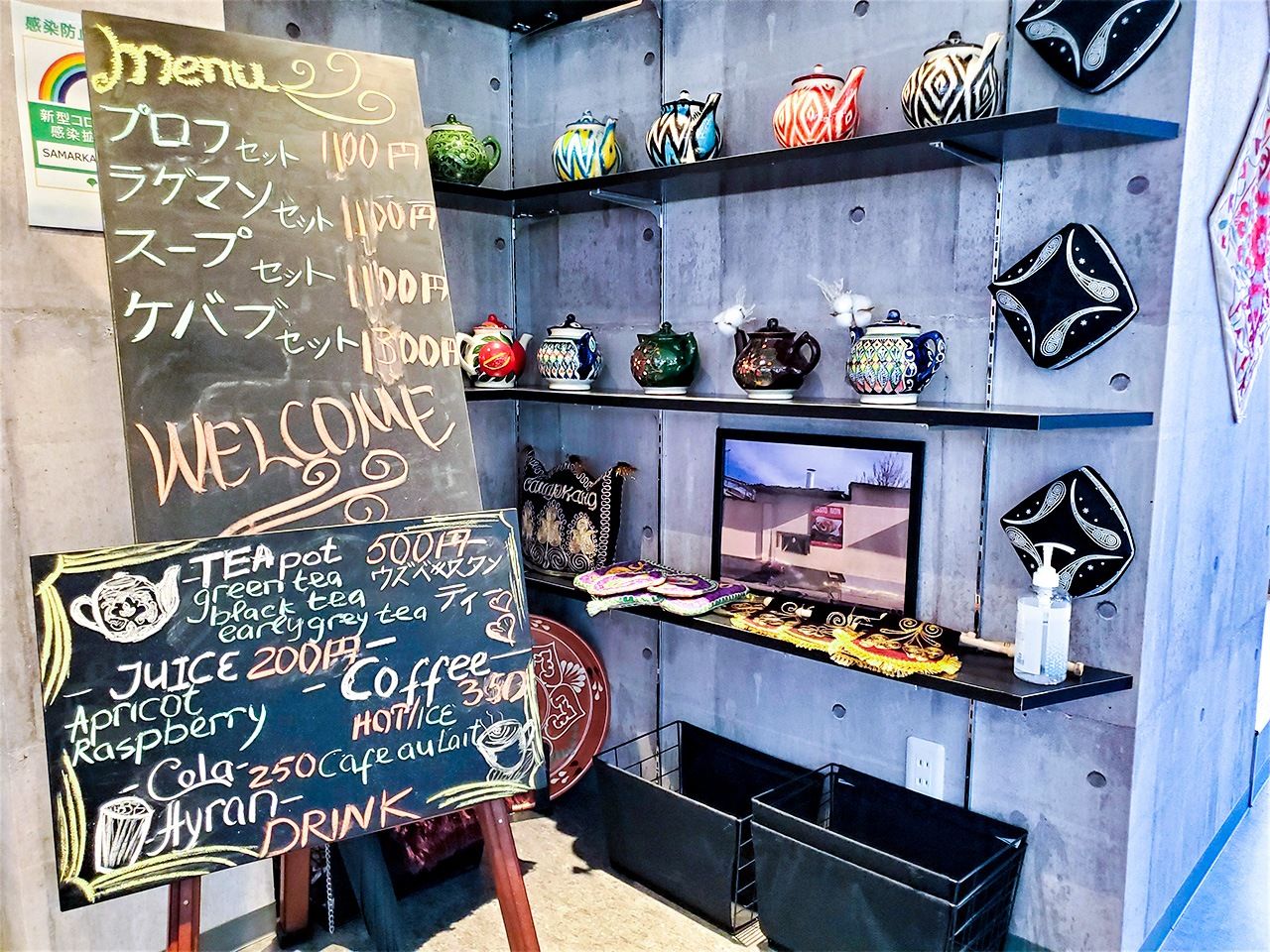 (Originally published in Japanese. Banner photo: Akmal tells his story in the modern styling of Samarkand Terrace. Its location in this new building is a bright, comfortable one. All photos © Kumazaki Takashi.)