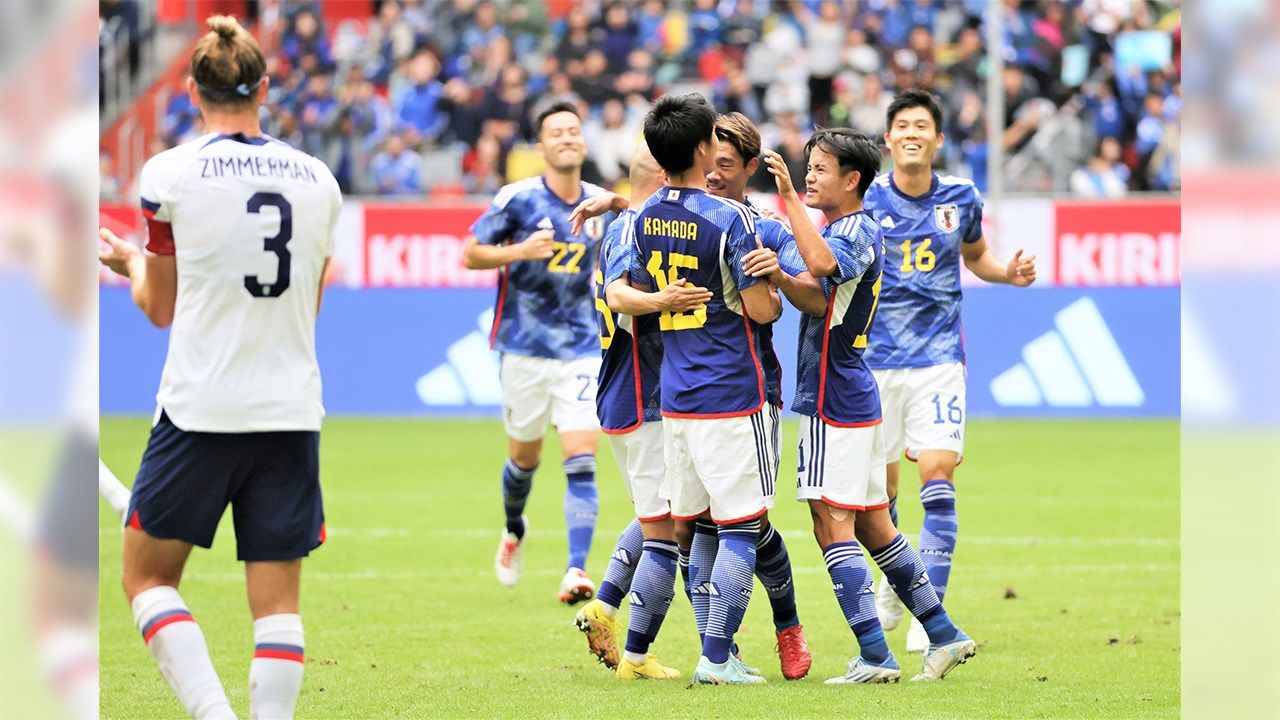 Sports Nov 18, 2022
At this year’s World Cup in Qatar, which kicks off on November 20, Japan’s men’s national team will be aiming to reach the quarterfinals. But how will the team approach its crucial opener against Germany, and which players will be key to Japan’s success?

Quest for the Quarterfinals

The Japanese men’s national soccer team has made remarkable progress in the last two decades. In six tournaments from Japan’s first World Cup finals appearance in France in 1998 to its most recent outing in Russia in 2018, the team has made it past the group stage on three occasions. In short, as an emerging football nation, it has managed to make it to the round of 16 in one out of every two tournaments in which it participated. And while Japan has never made it further than the first knockout stage, that in itself is a sign of alarmingly rapid growth.

The Japanese national team is currently twenty-fourth in FIFA’s rankings, and second in Asia, positions that belie the fact that the majority of squad members currently play for teams in Europe. While head coach Moriyasu Hajime, himself a former international, has set a target of reaching the quarterfinals at this year’s World Cup, Japan’s group also features potential title challengers Spain and Germany. They are joined by Costa Rica, who, having reached the quarterfinals at Brazil 2014 and won a playoff to reach this year’s tournament, are also sure to provide Japan with stern opposition.

That is not to say, however, that it will be impossible for Japan to make it out of their group. But there are three crucial points when it comes to realizing that objective. 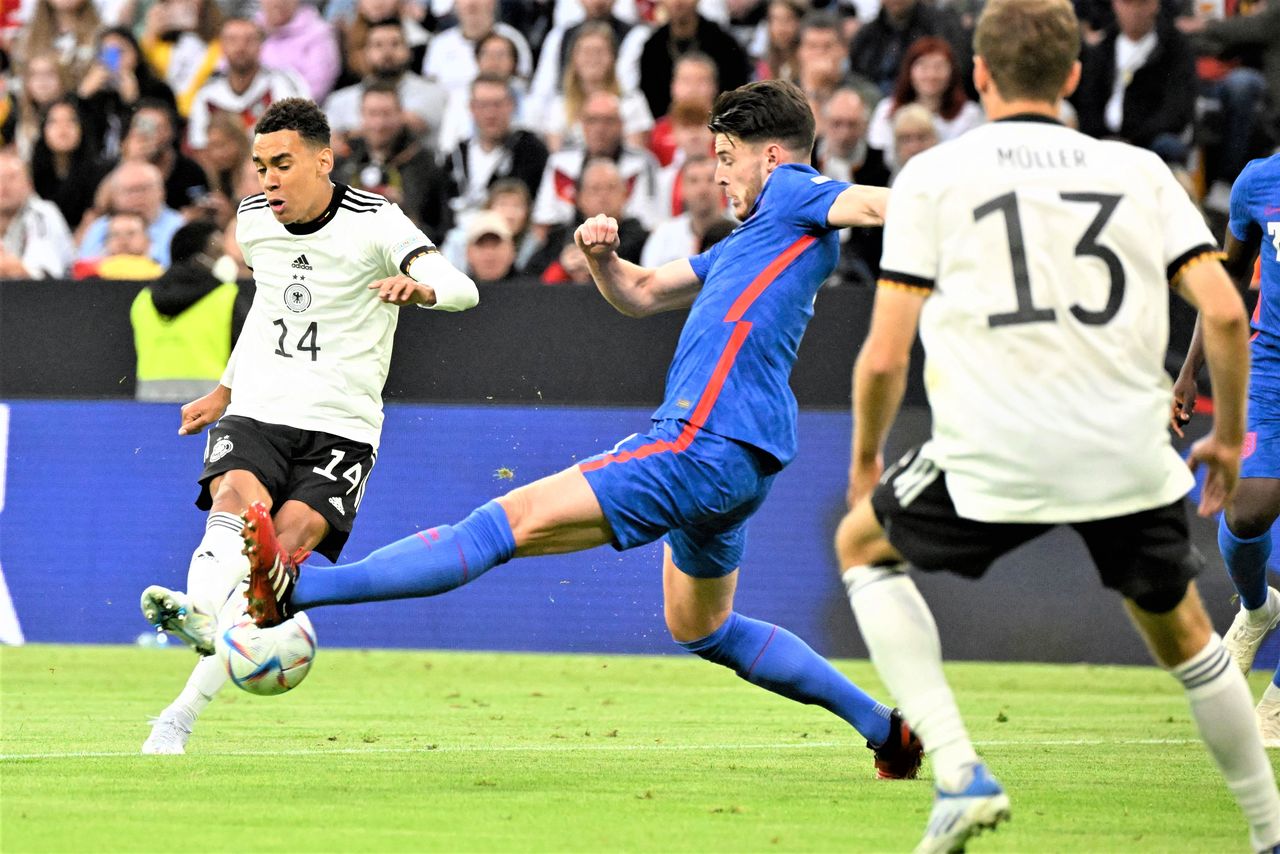 Something that sets this year’s World Cup apart from previous installments is the short time available for teams to prepare ahead of the tournament. England’s Premier League, perhaps Europe’s leading domestic league competition, went on break after a final round of games on November 12 and 13, leaving just 10 days before Japan’s opening match against Germany on November 23. But to coach Moriyasu, this is far from a negative. Indeed, he sees it as a plus, commenting that “Japan’s players are highly adaptable, and will step up to meet the challenges in front of them.”

After all, in order to reach the World Cup, Japan already had to contend with long-distance travel and different time zones during the final games of the Asia-Pacific qualifying tournament. With many squad members based in Europe, and little prep time available, the team faced the problem of how to achieve peak performance in the first two games in quick succession. But though the decisive away game against Australia came so soon after the squad assembled, Japan performed aggressively in both attack and defense, coming away with a 2–0 victory. One solution implemented to get around the short prep time was the provision of scouting reports on opponents to individual players before the international break.

This successful experience should aid preparations to face a highly ranked German side. Now may not be the time to talk of an opening game upset, but regardless of the result, if Japan can get off on a good footing, that should stand the team in good stead for its second and third matches.

Japan’s second outing, on November 27, is against a pacey and defensively solid Costa Rica side featuring Paris Saint Germain goalkeeper Keylor Navas. This is followed on December 1 by the final group game against a Spain team based around young talents like Pedri, Eric Garcia, and Ferran Torres. 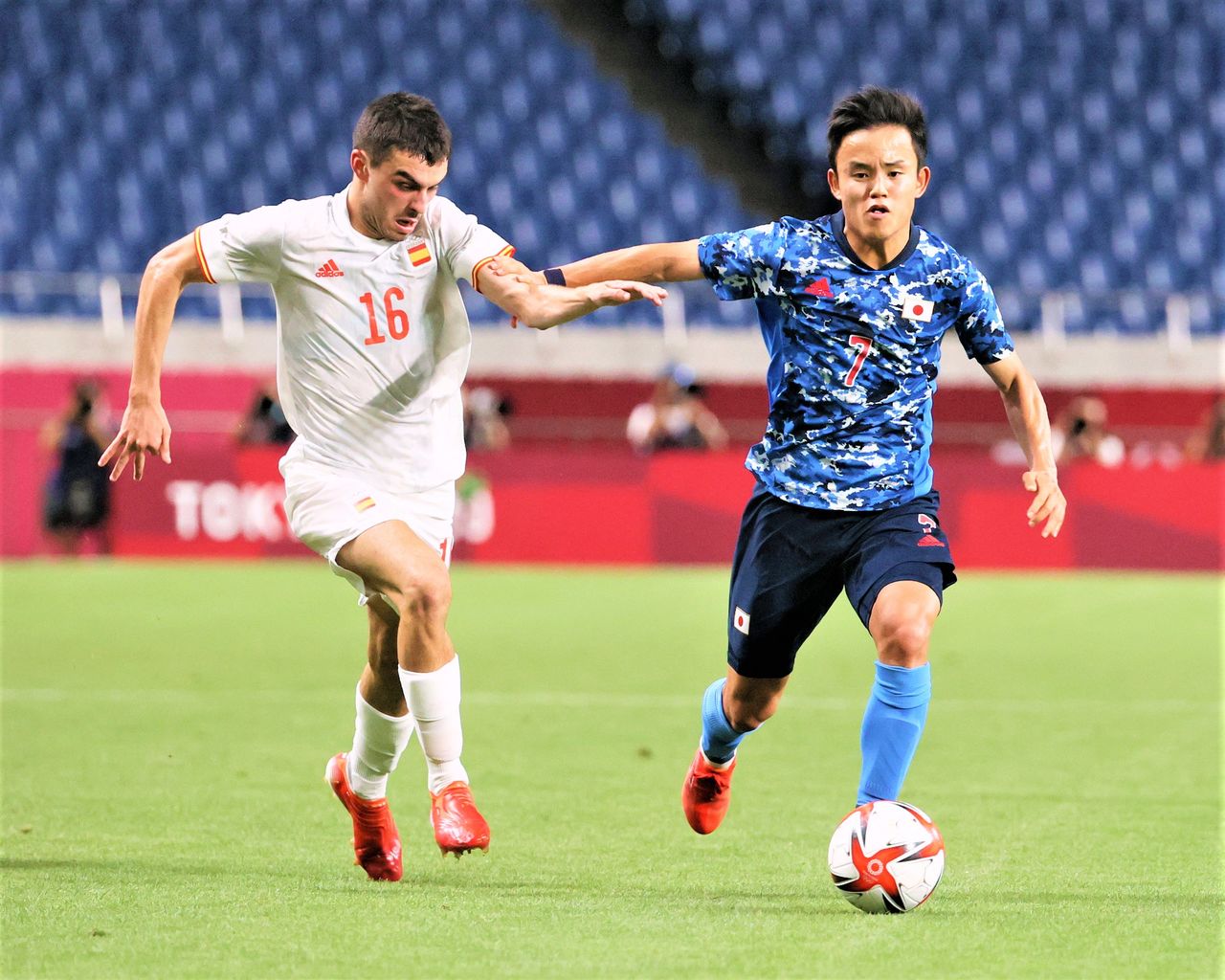 Against higher-ranking opposition like Germany and Spain, Japan is likely to surrender possession and find itself defending for long periods. Basing its strategy around the kind of energetic front-line pressing it deployed in September’s friendly against the United States, it will wait for opposition mistakes in the final third before pouncing with short, fast counter attacks.

To succeed in this strategy, it is crucial that Japan maintains a compact formation, systematically forcing transitions by minimizing space between the midfield and defensive lines, and creating chances by breaking forward equally systematically when switching from defense to attack. If it is forced to sit back too deep, it will face an increased risk of conceding while limit attacking opportunities, so the key will be for the team to maintain as high a line as possible and try to win the ball in the opponents’ defensive third.

A crucial role in this system is played by the lone striker. In the friendly against the United States, Celtic’s Maeda Daizen made an important contribution in this position, aggressively chasing the ball back and forth. But who will get the nod in Qatar?

Meanwhile, in the second match, against Costa Rica, Japan is likely to dominate possession. With more time spent in attack than defense, this game will call for a different strategy from the matchups against Germany and Spain. However, with Japan sometimes struggling against defensively solid opponents, they will need to figure out how to poach a goal against a team in a deep-lying block. In order to reach the round of 16, it is crucial that Japan comes away from the game against Costa Rica, who sit lower in the FIFA rankings, with all three points.

The timing is not the only difference about this year’s World Cup. Squad sizes have been increased from the usual 23 to 26 members, with the opportunity to make five substitutions each game rather than the traditional three. While these rule changes undoubtedly favor the nations with the deepest talent pools, this does not change the fact that teams’ chances of progressing are dependent on how effectively they can leverage their full squads. Though some squads may prefer to play with an established lineup, the shorter rest periods between games (three days as opposed to the usual four) also carry certain risks. For a Japan side whose approach is predicated on hard work, and who will need to give more than 100% each game in order to make it out of their group, fatigue is likely to be a major factor. As such, a degree of squad rotation seems like the best approach. 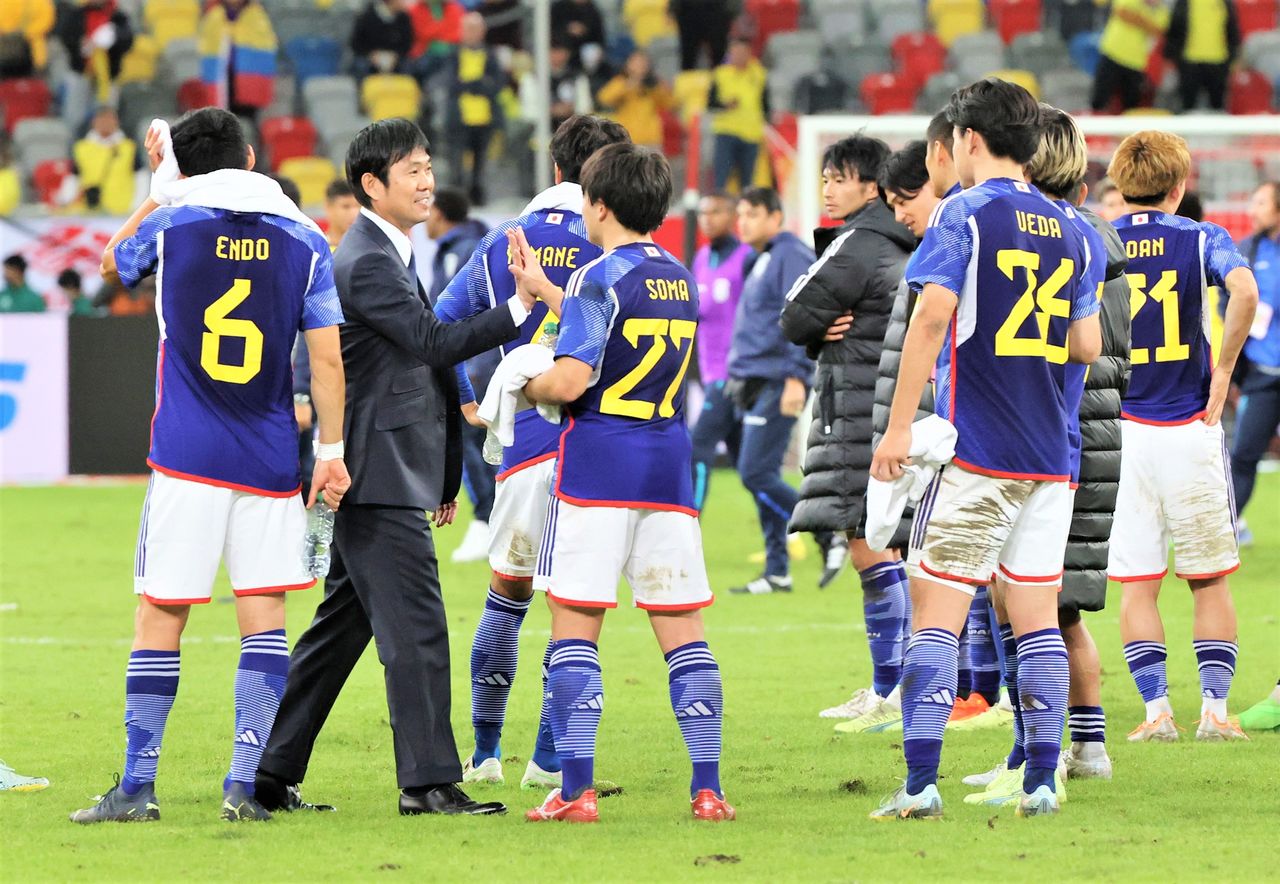 For Japan head coach Moriyasu Hajime (second from left), Qatar 2022 marks the culmination of four years at the helm. (© Jiji)

From the long periods of defending expected against Germany and Spain, to the long periods of attacking that are likely against Costa Rica, Moriyasu’s ability to find the proper variety in both team selection and tactics will be the mark of his qualities as a coach.

What Moriyasu will certainly demand from all 26 squad members is a mentality that puts the team first. “Of course I want to help the players leverage their individual qualities,” he says. “But we can’t base our game solely around that. The strength of this Japan team lies in showcasing individual talents within a strong framework based on cooperation. Everything rests on giving your all for the national team, and that’s what we demand from our players.”

If Japan can come together in a system and play as one, the team’s chances of overcoming the challenges that confront it will surely improve.

In terms of Japan’s three key players, the first is 24-year-old Arsenal defender Tomiyasu Takehiro, a very modern center-back who combines power, pace, and technique. As well as helping to martial the team’s compact formation, he can create chances with passes from deep.

The second is 26-year-old Kamada Daichi, currently in a rich vein of goalscoring form for his club Eintracht Frankfurt. Whether deployed as a forward or an attacking midfielder, he excels at creating shooting opportunities. While his strike in September’s game against the United States may have been accompanied by several missed chances, the fact that he was in position to get so many shots away in the first place speaks to a rare talent.

The third and final key man is Kubo Takefusa, the 21-year-old Real Sociedad winger who is known for stretching the play and driving his team rapidly up the pitch with runs into space. Kubo’s accurate striking of the ball also makes him a threat from set pieces.

Will these players be able to showcase their talents and cause a major upset? If they do manage to reach the round of 16, it could mark the opening of a new chapter in the history of Japan’s national team.