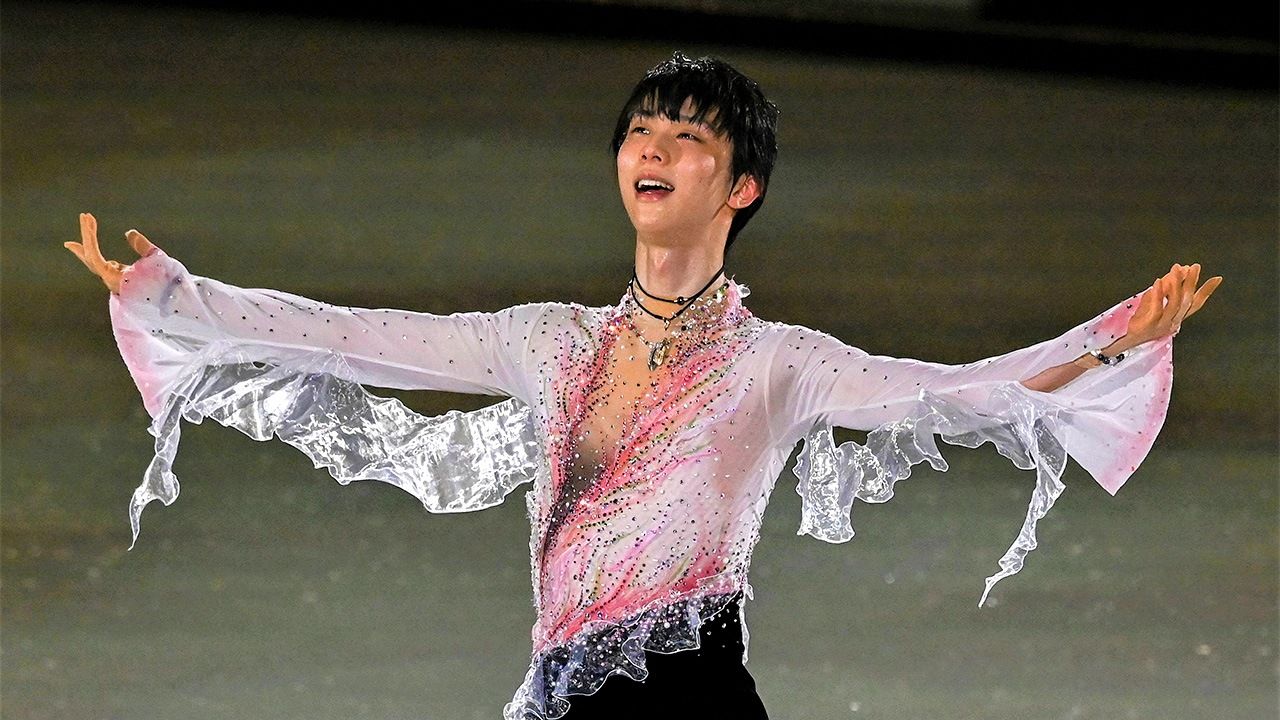 Going Pro: Hanyū Yuzuru Reinvents What It Means to Be a Figure Skater

Sports Jan 12, 2023
Figure skater Hanyū Yuzuru, who announced his intention to turn pro at a press conference in July, put on his first self-produced ice show in November and December last year. The program was filled with surprises that put to rest any doubts over whether he maintains the skills that made him famous. What possibilities lie ahead as he reinvents the very concept of a figure skater?

“I Will Always Be an Athlete”

In a statement that sent shockwaves through Japan and the world, figure skater Hanyū Yuzuru announced his intention to turn pro at a press conference held on July 19.

With his back-to-back Olympic gold medals at Sochi, Russia, in 2014 and Pyeongchang, Korea, in 2018, Hanyū has been a leader in the world of figure skating. This made his reason for leaving the amateur side of the sport all the more shocking. While noting that he would remain an athlete who continued to take on new challenges he also stated: “I think that figure skating is odd. Why is it that the only people who are considered to be active, working athletes are the amateurs? Take baseball, for example. If a high school baseball player wins the Japanese High School Baseball Championship at Kōshien and then turns pro, does anyone think that this baseball player ‘retired’ from baseball? I’m the same as that baseball player in that I think of this as the start of my career. What I show the world that I can do from now on and how hard I strive to do it are the things that are important.”

With this statement he pointed out something peculiar about the world of figure skating. In most other sports, baseball and soccer included, those at the top are the professional teams and players. Amateurs, therefore, rank below them. But in figure skating those who compete in championships are “amateurs,” while those who leave the competitive circuit and appear in ice shows and the like are considered “professionals.” This is why there is the perception that the “professionals” have retired from the sport.

Hanyū is making the opposite argument. His attitude, upturning the conventional wisdom, has had a powerful impact on figure skating fans around the world. 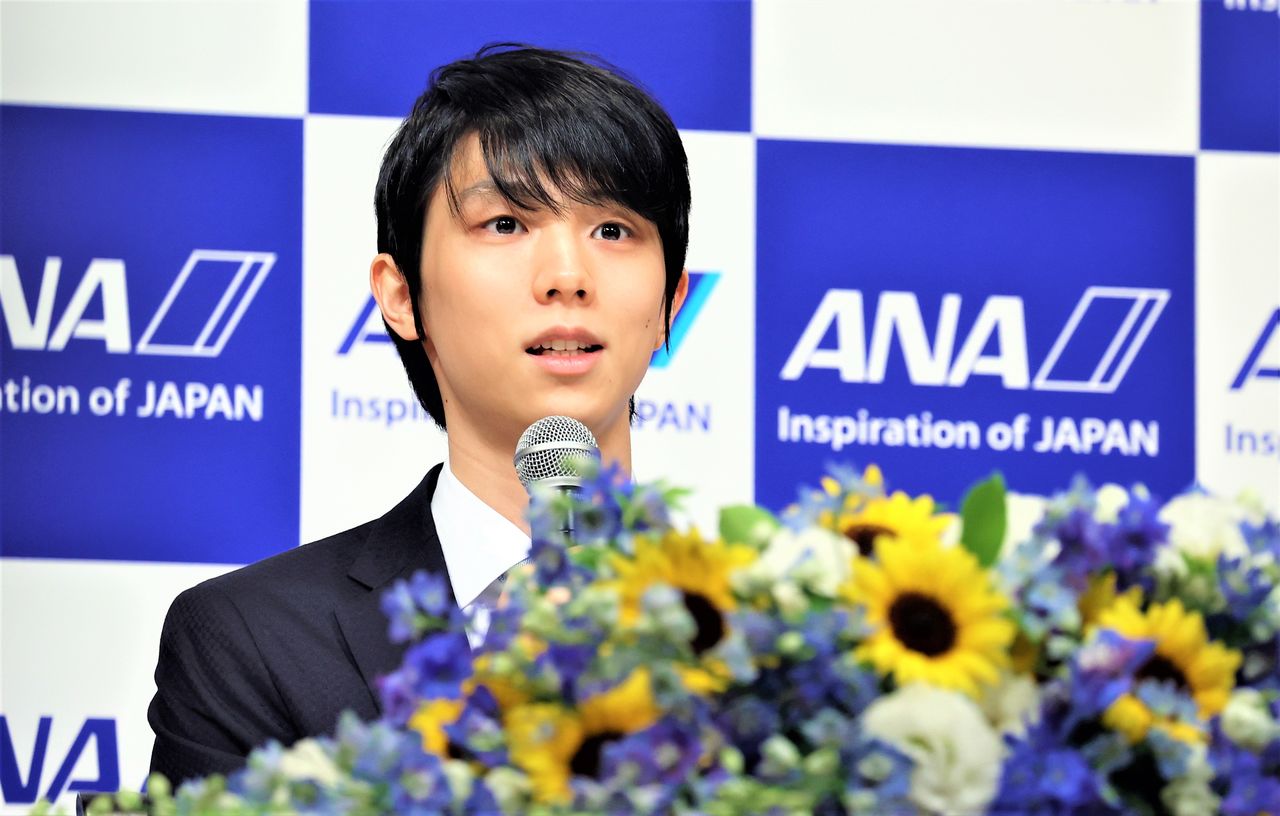 Hanyū making the shocking announcement of his decision to turn pro at a press conference on July 19, 2022. (© Jiji)

A Show that Changed Conventional Wisdom

Following the press conference Hanyū started a YouTube channel, where he posts videos of his practice sessions and similar content. And then came his first step into the world of professional skating. On November 4 and 5 he performed an ice show in Yokohama called Prologue, with further performances in early December in the city of Hachinohe, Aomori.

The first performance made it clear that this ice show was like no other. Typically, skaters appear alone in two performances, with the program rounded out by group dance sections bookended by the opening and the finale. Programs usually last a little over two hours, with the individual performances making up only a small part of that total time.

Prologue, however, consisted of Hanyū on his own for the entire program. Over its 90-minute running time, he appears in eight separate routines. This is a feat requiring astonishing physical strength and stamina.

And the surprises did not stop there. The program included quadruple jumps, triple axels, combination jumps, and other highly challenging moves, as well as dance steps that rival anything he did while on the competition circuit. This was an extremely high-quality show requiring a tremendous effort just for Hanyū to complete the long program on his own, much less to give a top-level performance all the while.

After completing the first show, Hanyū spoke about his performance.

“As the show opened, I was thinking about the decision I had made and my commitment to moving one step at a time toward my dream,” he said. “I created the show so that it would be a forum in which I could share anew with the audience the experience I have gained and the energy they have given me over the years as I moved from one part of the program to the next.”

As is evident from his statement, Hanyū himself handled the planning and production of the show. This self-production was yet another new challenge he took on.

Let us look at some of the details of the program Hanyū devised. One part is called “Romeo + Juliet.” This was the energetic program that he performed in the free competition at the 2012 World Figure Skating Championships, where he won a bronze medal. At first, images from the 2011–12 season were displayed, during which time Hanyū appeared in the rink. After the images disappeared, he began his performance.

The flow from the one part to the next had a keen effect on the audience. While reminding them of the major milestones in his career, his in-person appearance on the ice underscored the abilities he already had under his belt at the age of 17.

His performance at the Championships is now legendary, and so in a sense this display was a present to his fans. The costume he wore was the same one that he wore at the 2012 Championships. It proved that he still retained the same physical build, which in turn referred to his stoic training regimen. 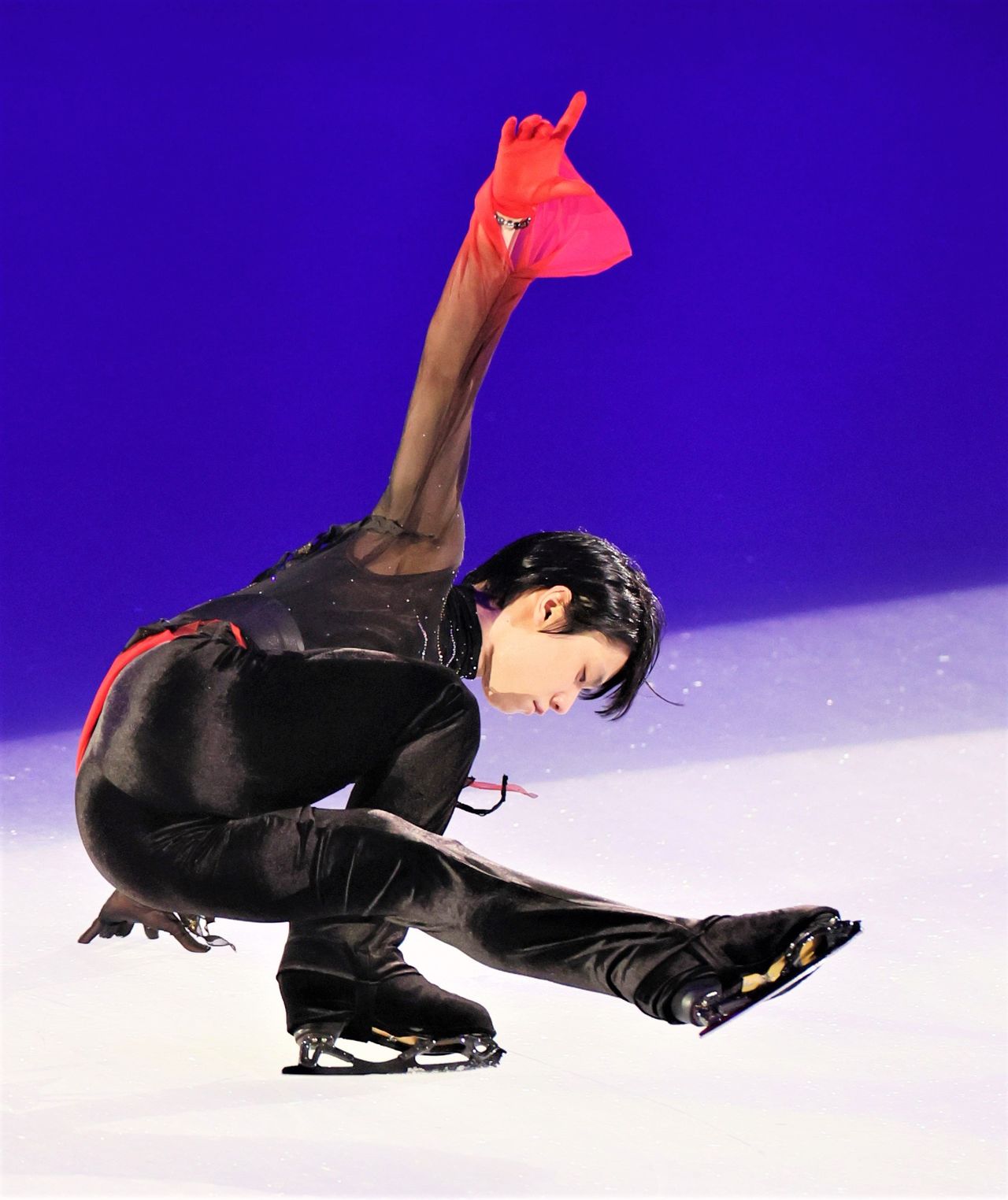 Hanyū seamlessly made the transition from competitive skating to pro on November 4, 2022, at Pia Arena MM in Kanagawa Prefecture. (© Jiji)

An Athlete’s Instinct: To Take on Challenges

The show included a Q&A session following the first two performances on the program, during which Hanyū answered questions that had been previously submitted. One of the questions he addressed at his first show on November 4 was “Can we still refer to you as an ‘athlete’?”

This was his answer.

“Although in one sense turning pro means that I am no longer an amateur ‘athlete,’ personally I still feel that I am competing. I’ve improved my strength and learned new forms of expression. I would be honored if people continued referring to me as an ‘athlete.’”

The power he displayed as a pro skater was comparable to his days as a competitor. He also took on the challenge of conceiving and producing his own show. “An athlete’s instinct is to take on challenges,” as some say. Based on this logic, the fact that Hanyū not only performed a long-form show but also produced it on his own certainly qualifies him as an “athlete.”

And his statement that “I would be honored if people continued referring to me as ‘athlete’” suggests that he retains both the resolve and the pride of just such a figure.

With his first ice show after turning pro, Hanyū Yuzuru questioned the notion that leaving competition was tantamount to retiring. The applause of the standing-room-only crowd of 7,900 spectators put to rest any question of his success.

If he eventually takes his show abroad, fans around the world will be able to see him performing as an athlete taking on new challenges, just as they did during his amateur competition days. Hanyū’s “second act” has just begun.