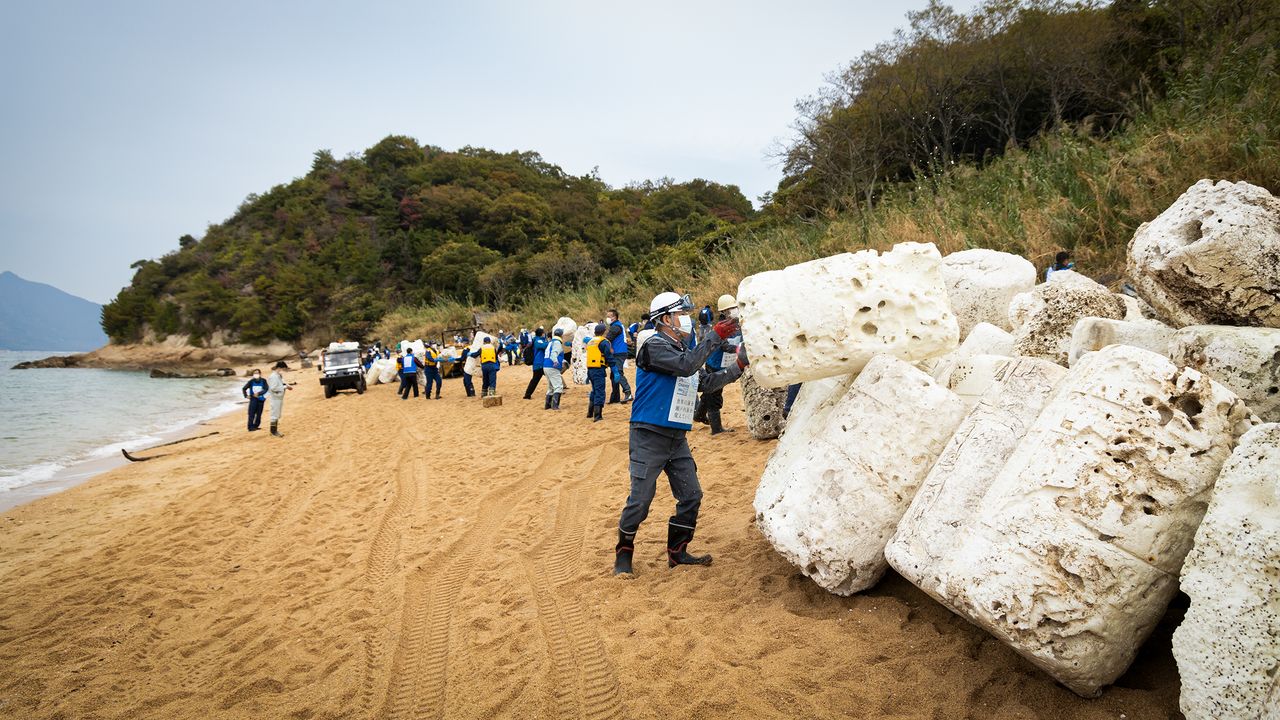 Toward Cleaner Beaches: Testing Removal Methods for Marine Debris on a Hiroshima Island

On November 17, a clean-up activity on Atatajima, an island in Ōtake, Hiroshima Prefecture, targeted marine debris, including 400 large fishing floats, that had washed up on the island’s western Nagaura coastline. The project involved landing craft, specialized vehicles, and plastic compactors, and was intended to act as a model case for such activities on remote coastlines and the tips of peninsulas, where access and transportation are difficult.

The activity was part of Setouchi Oceans X, a joint project undertaken by the prefectural governments of Okayama, Hiroshima, Kagawa, and Ehime, in partnership with the Nippon Foundation. As the Seto Inland Sea is enclosed between Honshū, Shikoku, and Kyūshū, relatively little debris flows into the sea from other waters, although this still amounts to an estimated 4,500 tons of marine waste each year. People connected to the local fishing industry, Hiroshima Governor Yuzaki Hidehiko, and Nippon Foundation Chairman Sasakawa Yōhei were among the 200 or so participants who collected and transported debris in the clean-up activity. 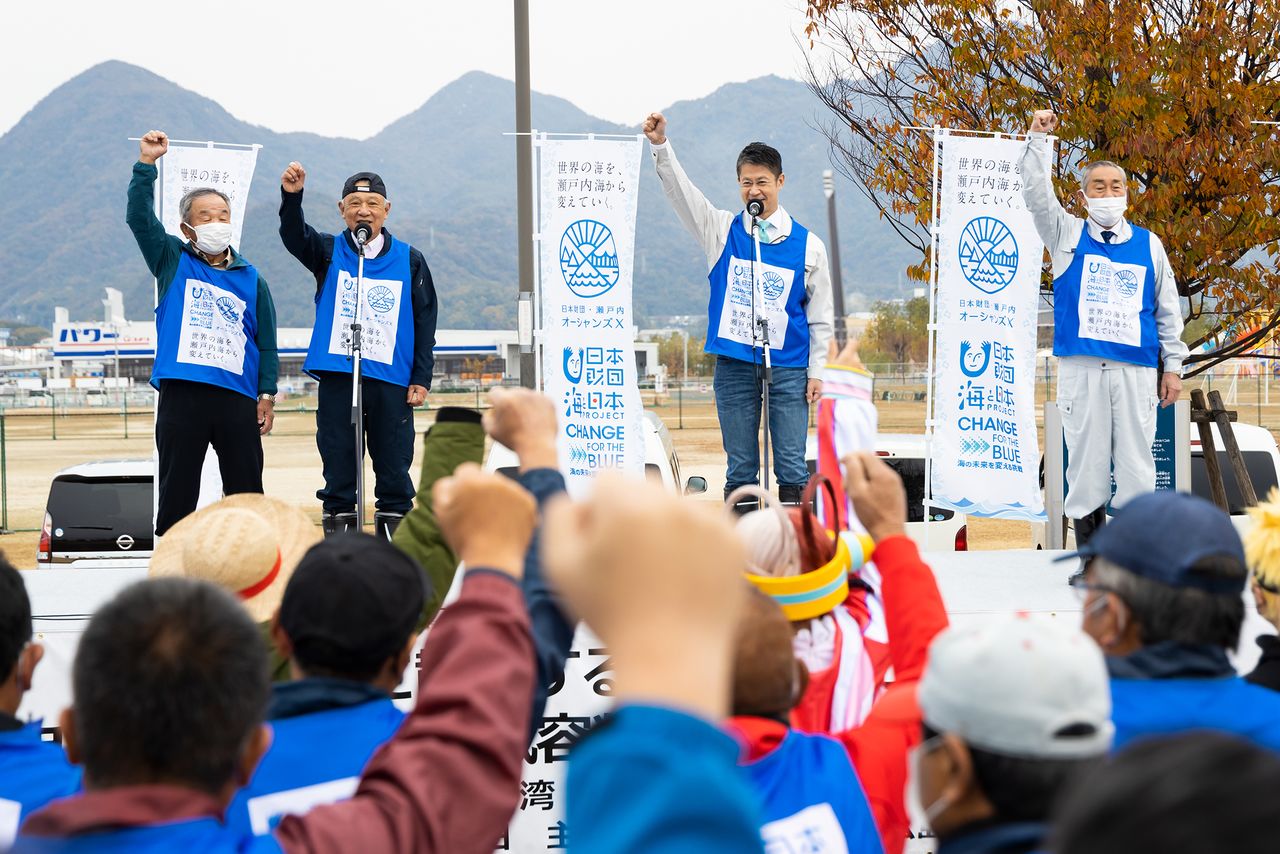 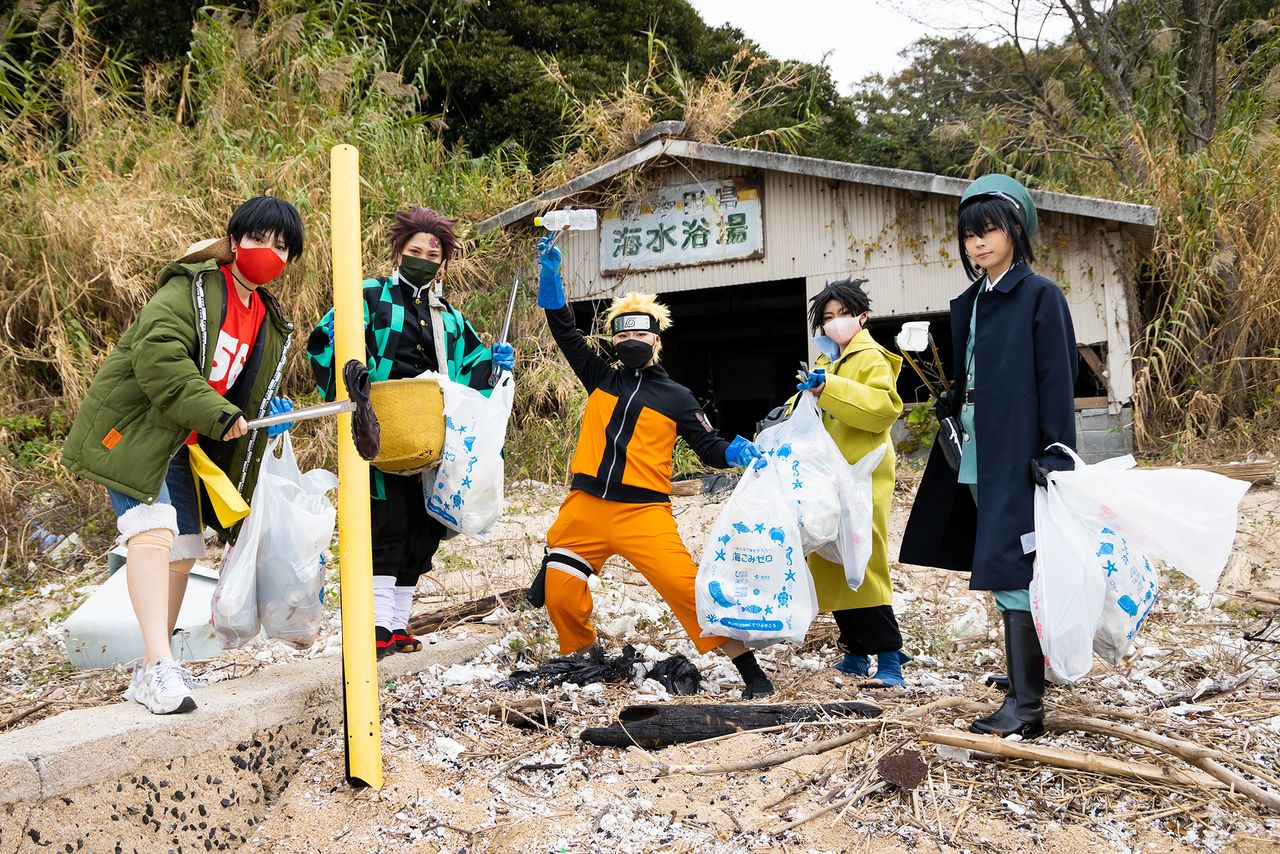 Some of those collecting debris dressed up for the occasion, their cosplay raising spirits among participants and drawing attention to the problem of marine waste.

Atatajima is a small island in Hiroshima Bay with a coastline of 11 kilometers, and a population of fewer than 250 people. It lies around 5 kilometers south of Itsukushima, famous as a UNESCO World Heritage site, and is known for its sardine fishing, as well as farming of yellowtails and oysters. Rich in natural beauty, its Nagaura coastline has a beach stretching for 350 meters that has been designated as a conservation area.

However, passengers on a vessel approaching the island for the event were startled by large white floats visible along the length of the beach. They were so numerous that a television camera operator on board asked whether they had been deployed especially for the day’s test—but no, these were part of the average day’s debris.

The Nagaura coast used to be popular with beachgoers, but marine debris has been washing ashore for around the past two decades. As paths from elsewhere in the island are overgrown with vegetation and there is no pier for disembarking from boats, it is not easy to get to this part of the island. Kawahara Hidemasa, head of the Atatajima Fisheries Cooperative, said, “Given our aging population, the disposal of the large amounts of marine waste scattered along the beach has been a headache for years.” Once on shore, Governor Yuzaki commented, “Seeing how terrible things can get in twenty years makes me realize the severity of the marine debris issue.” 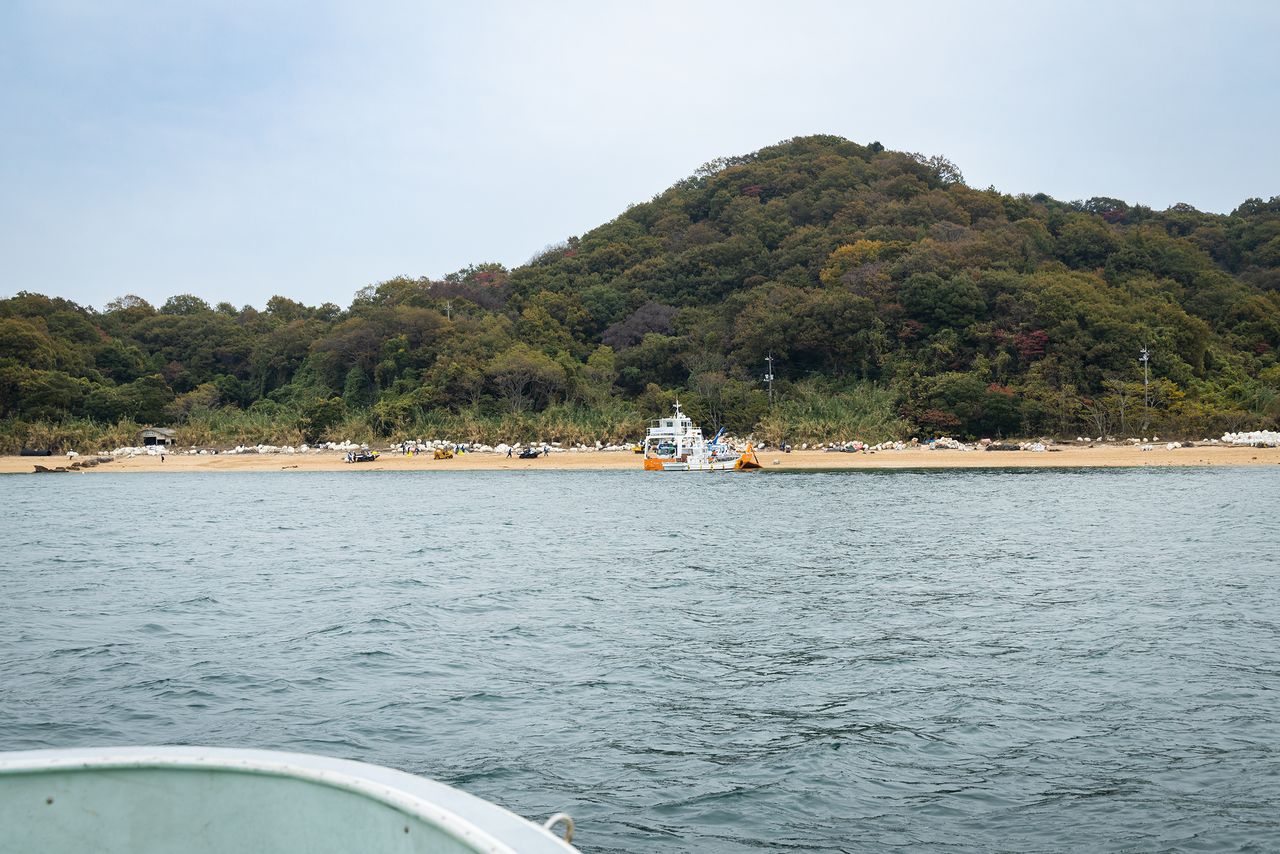 The Nagaura coastline as seen from the boat. White floats lie all along the sands. 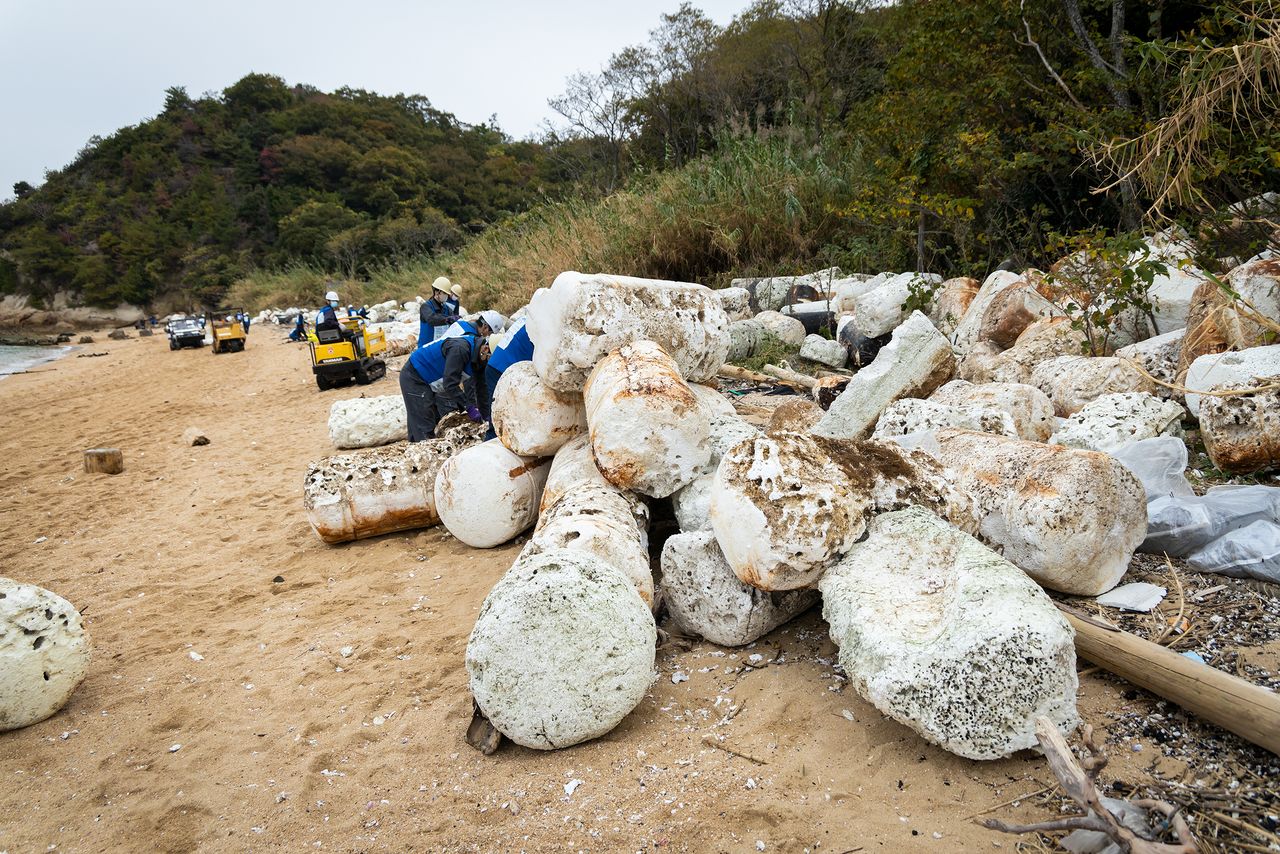 The large floats washed up on shore were once used to suspend marine farming rafts or to act as cushions between moored ships and wharfs.

In the day’s test activity, a landing craft arrived at the beach and unloaded specialized vehicles and sand cleaning machines, performing the double purpose of substituting for a pier and transporting the people who would clean up. 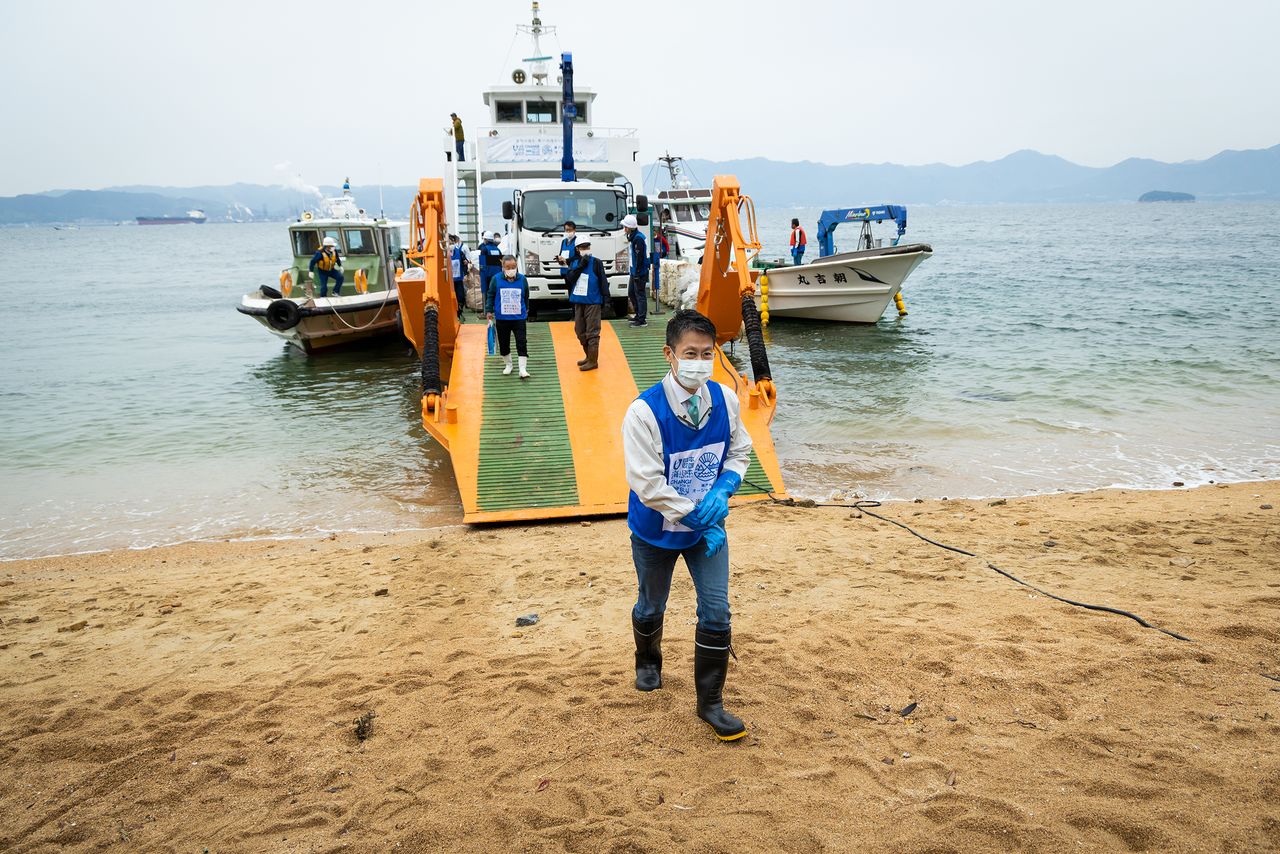 Governor Yuzaki disembarks from the lander. 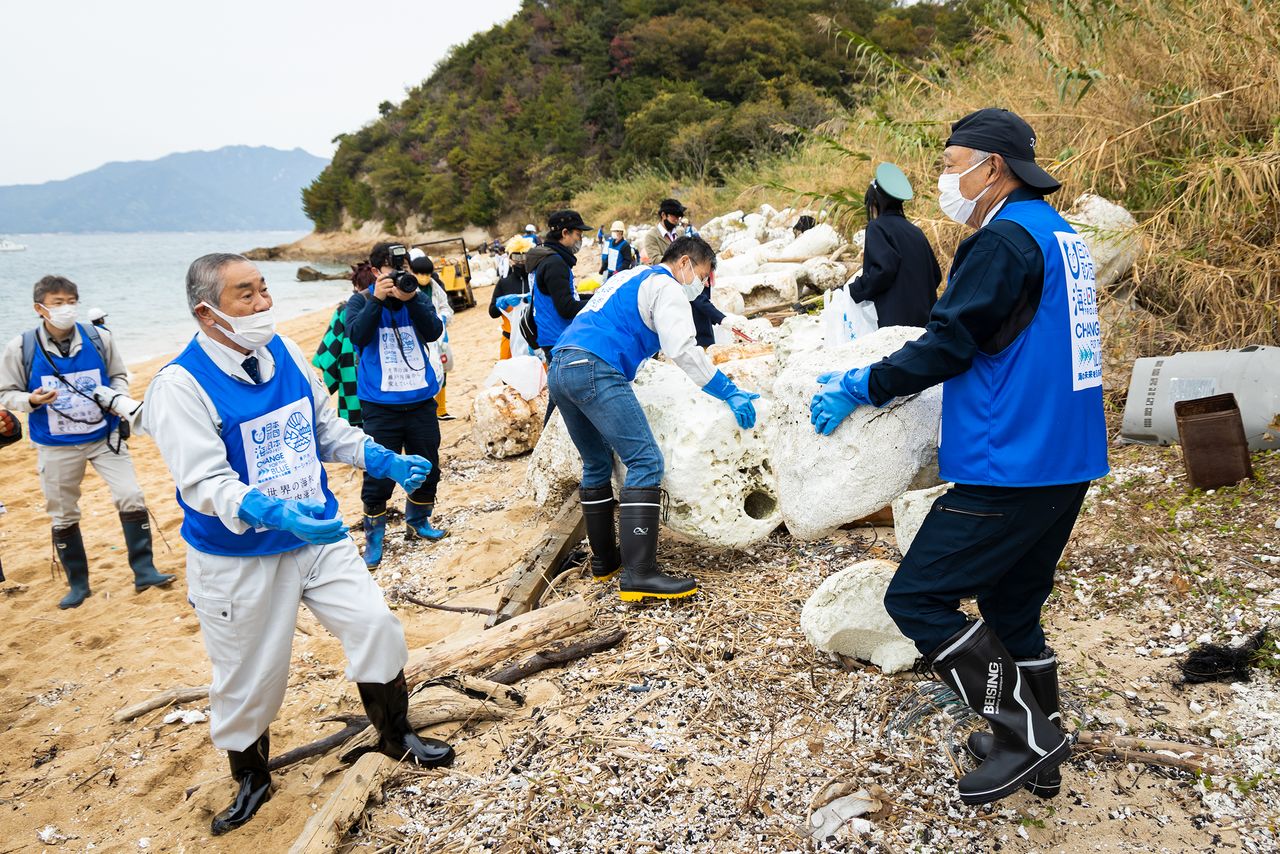 Mayor Iriyama (left, at front) prepares to receive a float from Chairman Sasakawa.

Participants formed a relay to quickly move the 400 floats and pile them close to the lander, while vehicles like buggies and all-terrain dump trucks made rapid work of collecting debris from farther afield.

The stars of the show were the plastic compactors. The polystyrene ocean floats weighed around 3 kilograms each, meaning a total weight of 1.2 tons for 400, but their bulk meant that even a full-sized truck would not be large enough to transport them. Using the compactors, it was possible to reduce them to a tenth of their original size so they would fit on a much smaller vehicle. This slashed the cost and effort required to transport them, both on land and at sea. 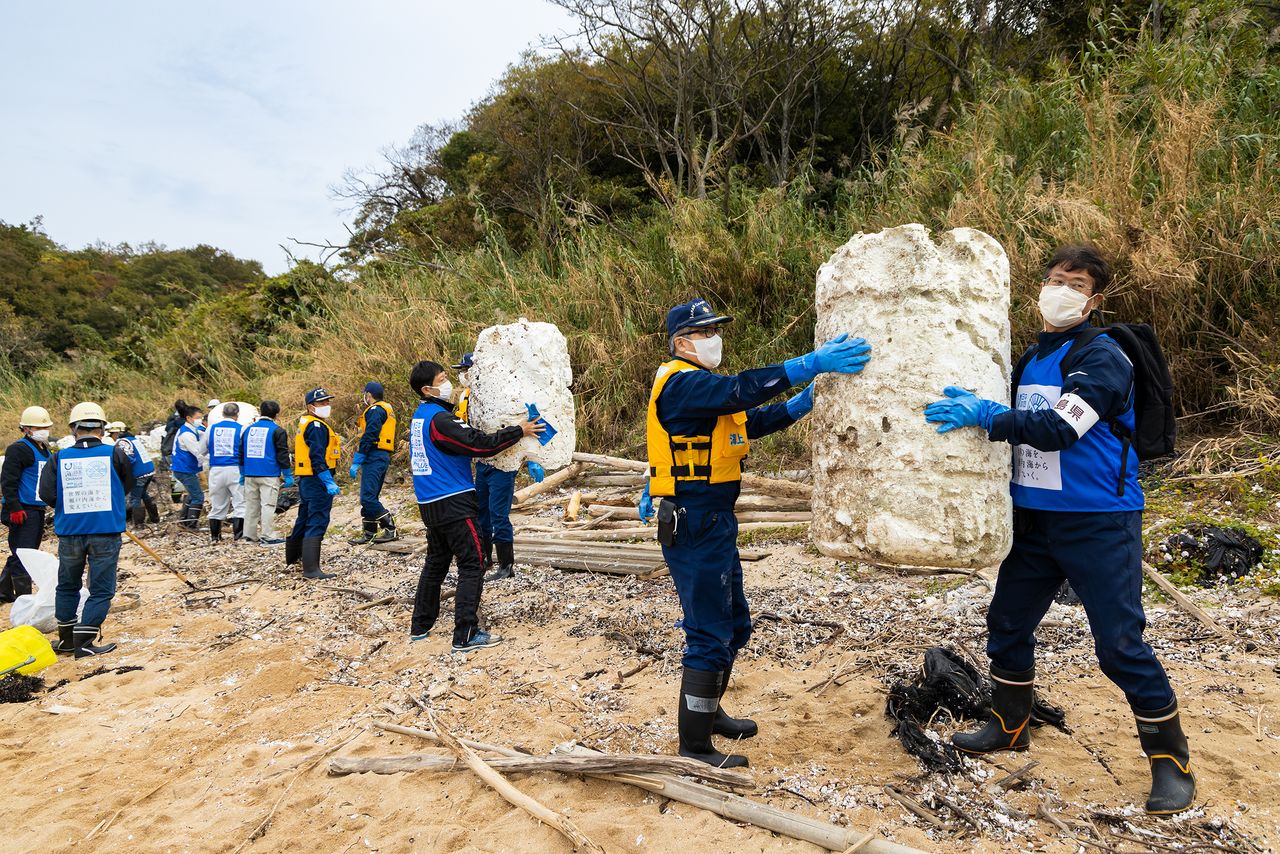 The floats were passed from hand to hand in a relay. 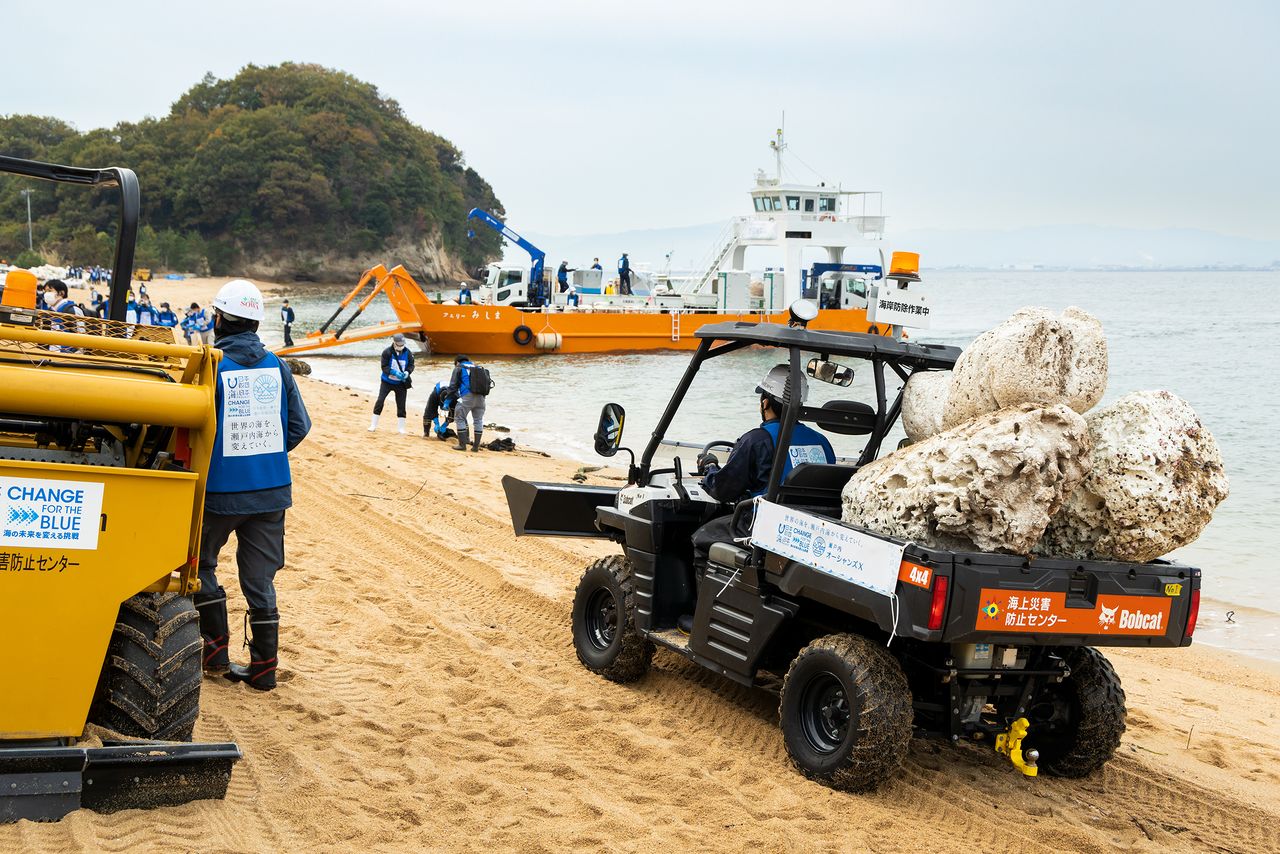 Its zippy speed, even on a sandy beach, meant this buggy could contribute greatly to the operation. 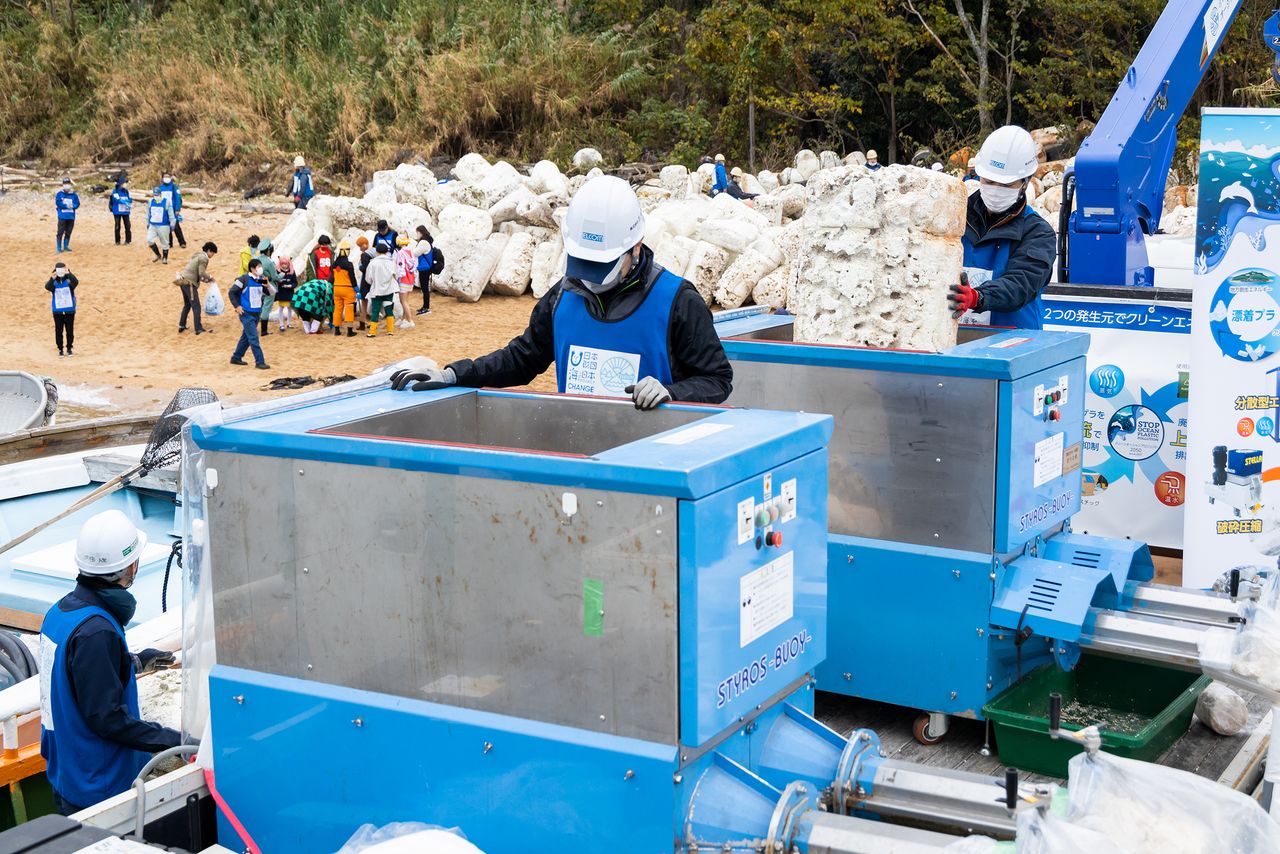 Two plastic compactors, specializing in polystyrene, were set up on truck platforms loaded on the landing craft, and reduced the hundreds of floats to a more a manageable size. 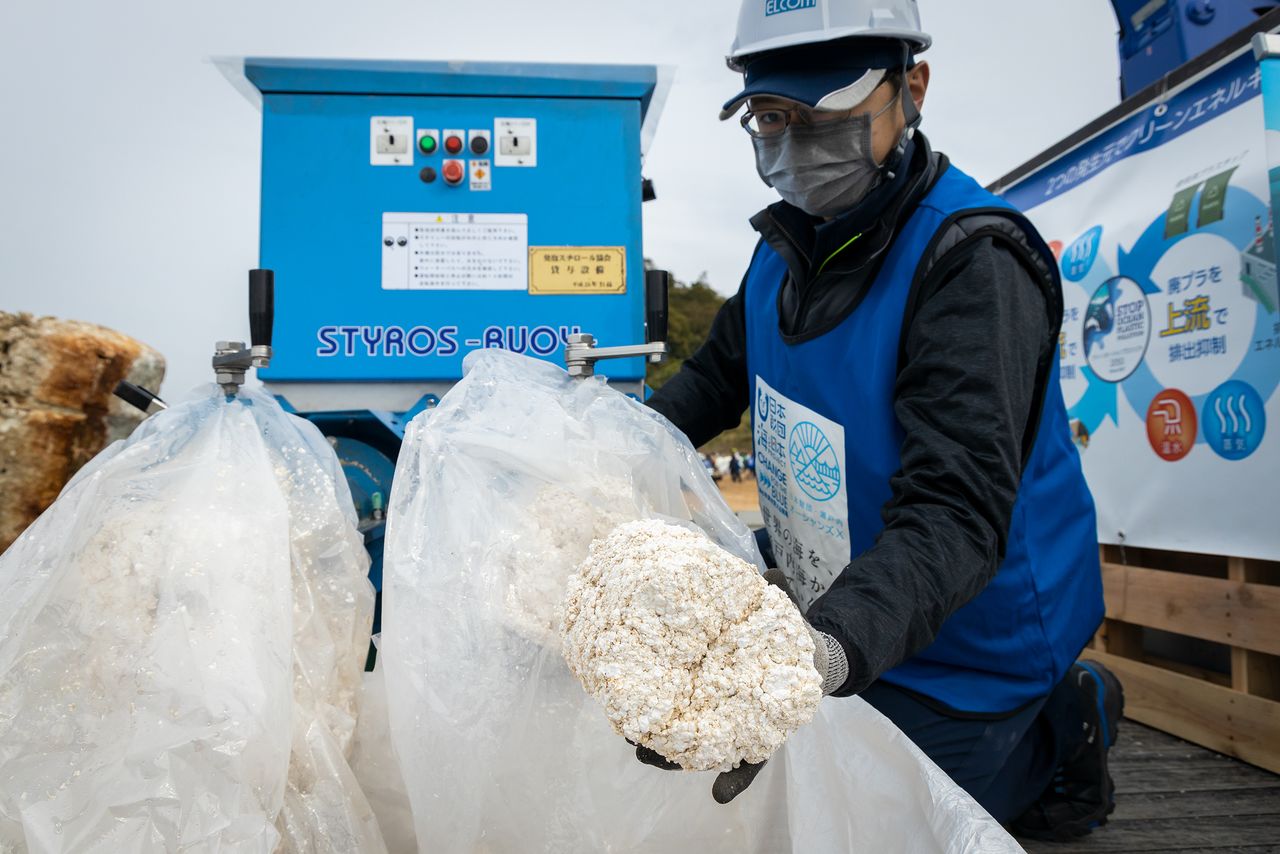 The floats after compacting. As the compactors do not use high temperatures, there are limited odors from melting. There is also no deterioration in the material quality, making the floats easy to recycle.

Easy to Create, Hard to Clear Up

After the cleaning activity, Governor Yuzaki said, “Looking around today, I felt that we have to take it to heart that it’s easy to create rubbish, but extremely hard work to clear it up.”

Chairman Sasakawa said: “Four prefectural governors have teamed up with the aim of making the Seto Inland Sea the most beautiful inland sea in the world. Starting with this kind of experiment, we need to win the cooperation of children today to usher in an era of zero waste.”

Setouchi Oceans X has set goals of reducing the new inflow of marine debris by 70% and increasing the rate of collection by 10%. Organizers intend to continue planning models for efficient clean-up activities. The Hiroshima prefectural government has also set a target of reducing marine plastic to zero by 2050. 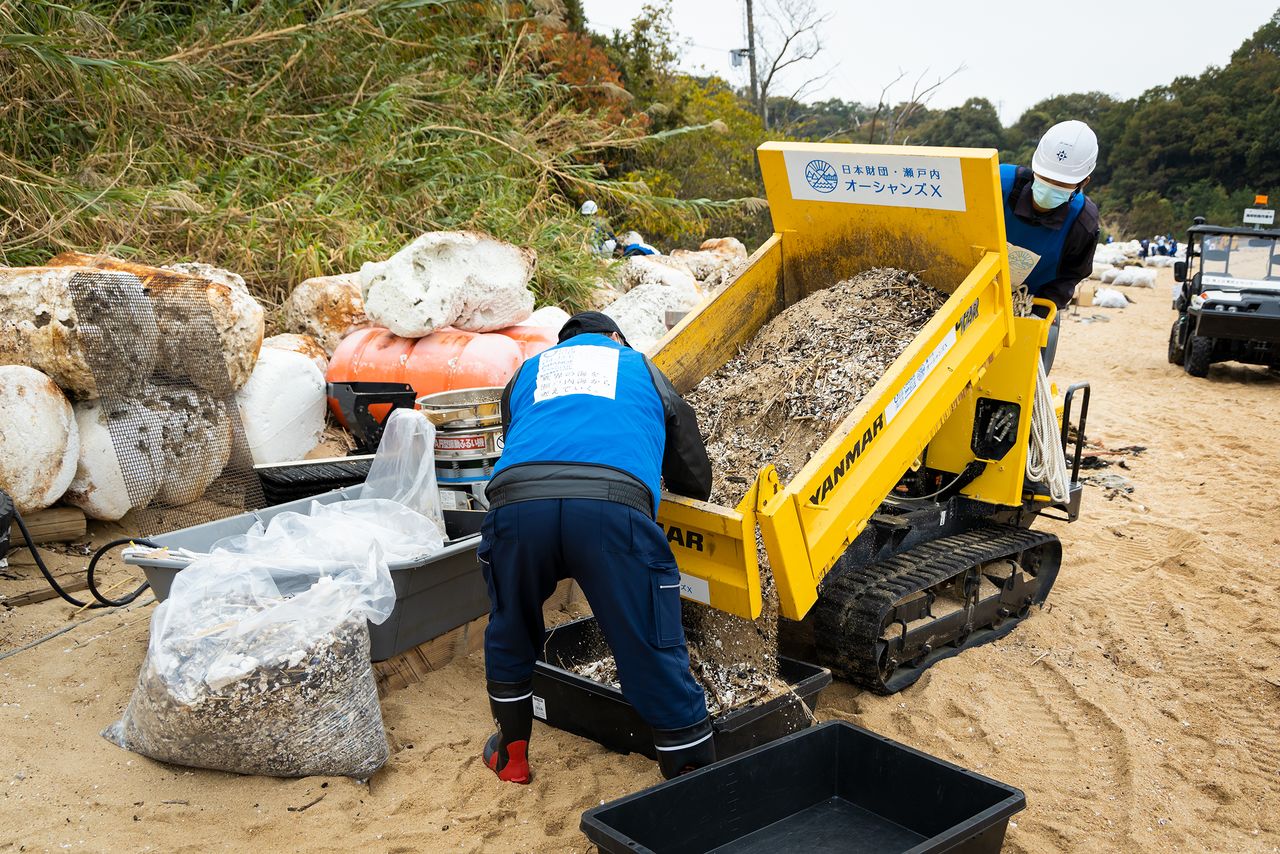 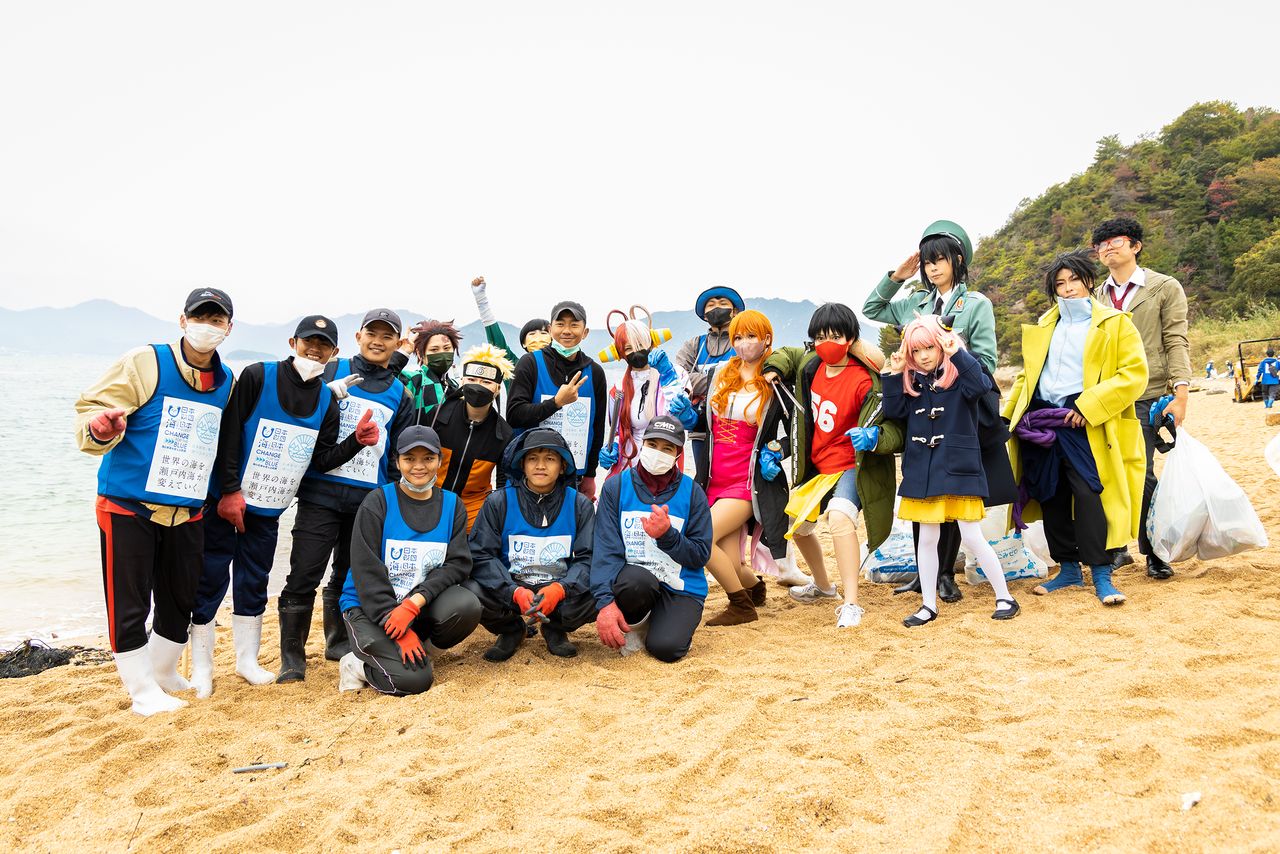 Foreign trainees based locally and cosplayers took part in the cleaning activity, and there are hopes that it might encourage similar efforts elsewhere.

(Originally published in Japanese on November 20, 2022. Banner photo: A clean-up activity on Atatajima in Ōtake, Hiroshima Prefecture on November 17, 2022. All photos © Nippon.com.)