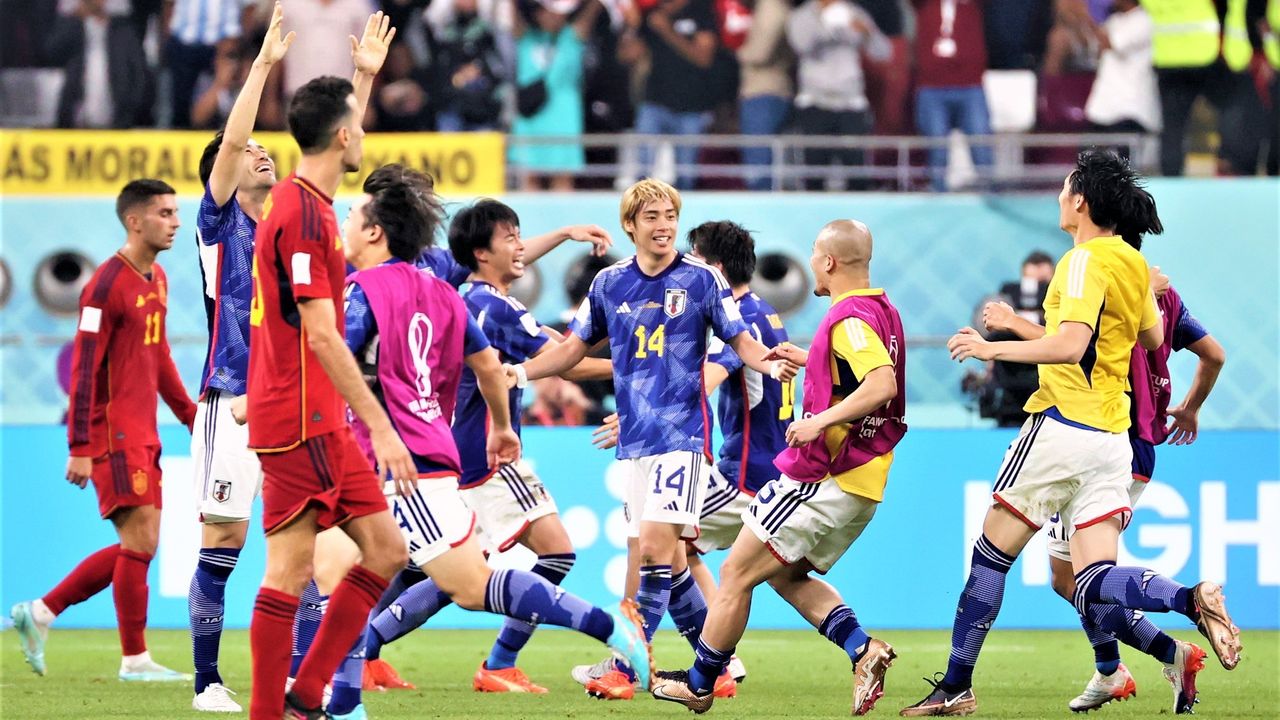 Sports Dec 29, 2022
The group stage of this year’s FIFA World Cup in Qatar saw Japan defy expectations by defeating former titlists Germany and Spain to finish at the top of their group. A sports writer looks back on the tournament to assess the potential that Japan and other Asian teams hold for the future.

Is Asian football closing the gap on the world’s best teams, or is it actually falling further behind?

Including the host nation, FIFA World Cup Qatar 2022 saw participation from a record six members of the Asian Football Confederation, with three of those—Japan, South Korea, and Australia—making it beyond the group stage. Itis certainly true that this marks a clear improvement over Brazil 2014, where no Asian teams reached the round of 16, and Russia 2018, when Japan was the sole AFC member to reach the knockout stage. This year also saw upset wins against illustrious opponents, including Japan’s triumphs against Germany and Spain, South Korea’s success against Portugal, and Saudi Arabia’s stunning comeback victory over Argentina.

But despite these heroic exploits, Japan, South Korea, and Australia all crashed out in the round of 16, meaning that no AFC side has made it to the World Cup quarterfinals since South Korea’s run to the semis in 2002. Indeed, the only non-European or South American nation to reach the last eight this year was Morocco, while last time out, in Russia, there were none at all. As such, it is hard to point to any major shift in the power balance of global football. While the gap between Asia and the world’s best teams does appear to be closing, it is safe to say that there is still some way to go.

This year also marks a transition for the World Cup, as the current 32-team format is set to be expanded to 48 for the 2026 tournament jointly hosted by Canada, Mexico, and the United States. This change will also see the current four berths for AFC teams expanded to no fewer than eight, with a further place available through a pre-tournament playoff. But what needs to happen in order for the emerging Asian football powers to routinely make it to the quarterfinals and beyond? I feel some clues can be gleaned from the recent performances of Japan’s national team.

Japan became the first-ever Asian nation to reach the World Cup last 16 at successive tournaments. While the team may have let a 2–0 lead slip to lose against Belgium in Russia in 2018 and went out on penalties to Croatia this year, there can be little doubt that Japan’s first-ever run to the quarterfinals is drawing ever closer.

It seems clear that one significant factor behind this progress is a dramatic increase in the number of Japan squad members who play in Europe.

Of this year’s 26-man squad, a record 19 play for European clubs in countries like England, Spain, Germany, and France. Even those players based in the domestic J. League, a further three—Goalkeeper Gonda Shūichi, and fullbacks Nagatomo Yūto and Sakai Hiroki—have also spent time with teams in Europe, meaning that some 80% of the squad have experience playing in some of the world’s strongest leagues.

It is worth noting here that in South Africa 2010, just four of Japan’s then-23 man squad had similar credentials. But now, thanks to fresh interest in the country’s up-and-coming young prospects after their strong on-the-pitch performances in Qatar, this number only looks set to grow.

Back in the days when most Japanese players plied their trade at home, national team managers had more chances to build the squad with frequent training camps. However, with such opportunities fewer and farther between, Japan’s recent improvement has been underpinned by the high-quality training and match play that Europe-based members now get to experience on a regular basis.

This season alone, Kamada Daichi, Morita Hidemasa, and Maeda Daizen have appeared in Europe’s premier competition, the UEFA Champions League, while Minamino Takumi, Dōan Ritsu, Tomiyasu Takehiro, and Kubo Takefusa have received outings in the UEFA Europa League. It is frequent exposure to such challenges that forms the backdrop to this year’s astonishing World Cup victories over illustrious foes Germany and Spain. 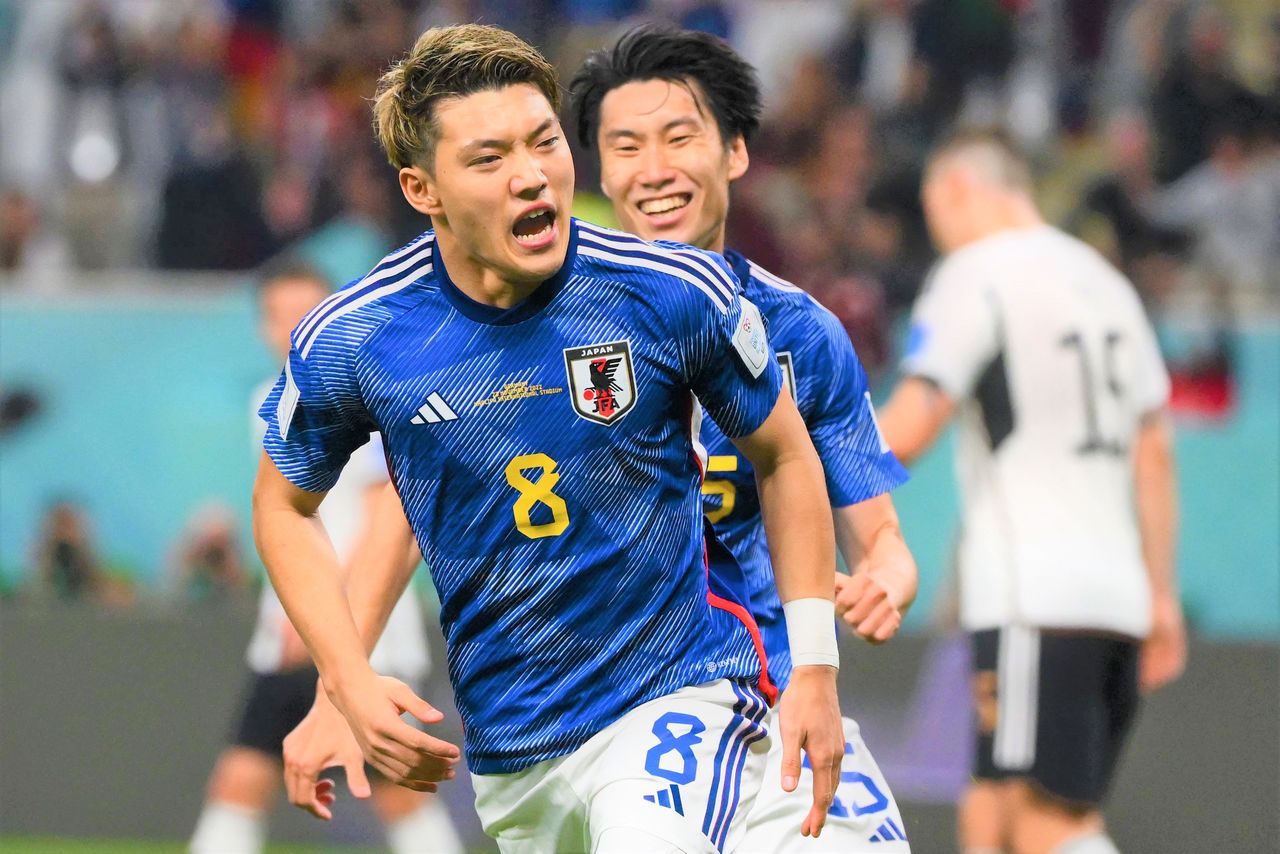 Japan’s Dōan Ritsu celebrates his goal against Germany on November 23, 2022. He scored in dramatic fashion again in Japan’s other come-from-behind win against and Spain. (© Jiji)

All this, of course, is not to say that Japan’s domestic leagues are unimportant. Against Spain, Taniguchi Shōgo of perennial title challenger Kawasaki Frontale played a crucial role as part of a back three, displaying the tactical intelligence to make defensive adjustments mid-way through the first half that were crucial to preventing the Spaniards from extending their lead. His performance also provided a valuable showcase of the skill and commitment characteristic of the J. League’s top players.

While the J. League’s own foreign contingent was long restricted to Brazilian journeymen, in recent years Japan’s top flight has taken on a more global feel, with the arrival of stars from Denmark, Switzerland, and Spain, including Barcelona legend Andres Iniesta. It is another welcome development that gives Japanese players a chance to hone their craft against top opposition at home as well as overseas.

At the World Cup, beside Japan’s own giant-slaying exploits, the opening match of Group C also saw fellow AFC representatives Saudi Arabia mount a stunning comeback to down eventual champions Argentina 2–1. Despite the whole squad playing for clubs in their own country’s domestic league, in contrast to rivals from Europe and elsewhere, the team clearly benefited from an extended pre-tournament training camp with six friendly matches to hone their fitness and interplay. However, despite reaping the rewards against Lionel Messi and his Albiceleste teammates, the Saudis failed to make it out of the group stage after losing their next two games to Poland and Mexico.

Meanwhile, host nation Qatar also fielded a squad entirely composed of domestic players but crashed out early after failing to register a single victory. Evidently without any players with European experience, a solid league alone is not enough to bring success at an international tournament.

Making the Most of New Substitution Rules

For me, the most intriguing aspect of Japan’s tactics at this World Cup was the flexibility with which the available players were deployed.

In this year’s unusually compressed tournament schedule, with only three days to recuperate between games, coach Moriyasu Hajime used all but four members of his 26-man squad. In the first two matches against Germany and Costa Rica, this included making use of all five allowable substitutions, seemingly in response to the intense physical exertion required against Die Nationalmannschaft, and as a tactical shift based on the Central Americans’ willingness to surrender possession.

However, the latter adjustment is difficult to describe as a success. The first half ended with Japan still caught in two minds as to whether they should retain possession and try to break down Costa Rica’s low block, or revert to the counterattacking approach that had served them so well against Germany. The second half was played at Costa Rica’s pace, with the Central Americans running out 1–0 winners after soaking up pressure and snatching a goal on the break.

While Moriyasu’s decisions in that game initially seemed far from a masterstroke, the group closer against Spain saw Itō Junya, Tanaka Ao, Kubo Takefusa, and Maeda Daizen return to the first 11, all seemingly reinvigorated after being rested from the starting lineup against Costa Rica. And with Japan ultimately taking away all three points after another come-from-behind victory, Moriyasu’s canny squad management across all three group games starts to seem worthy of reappraisal. 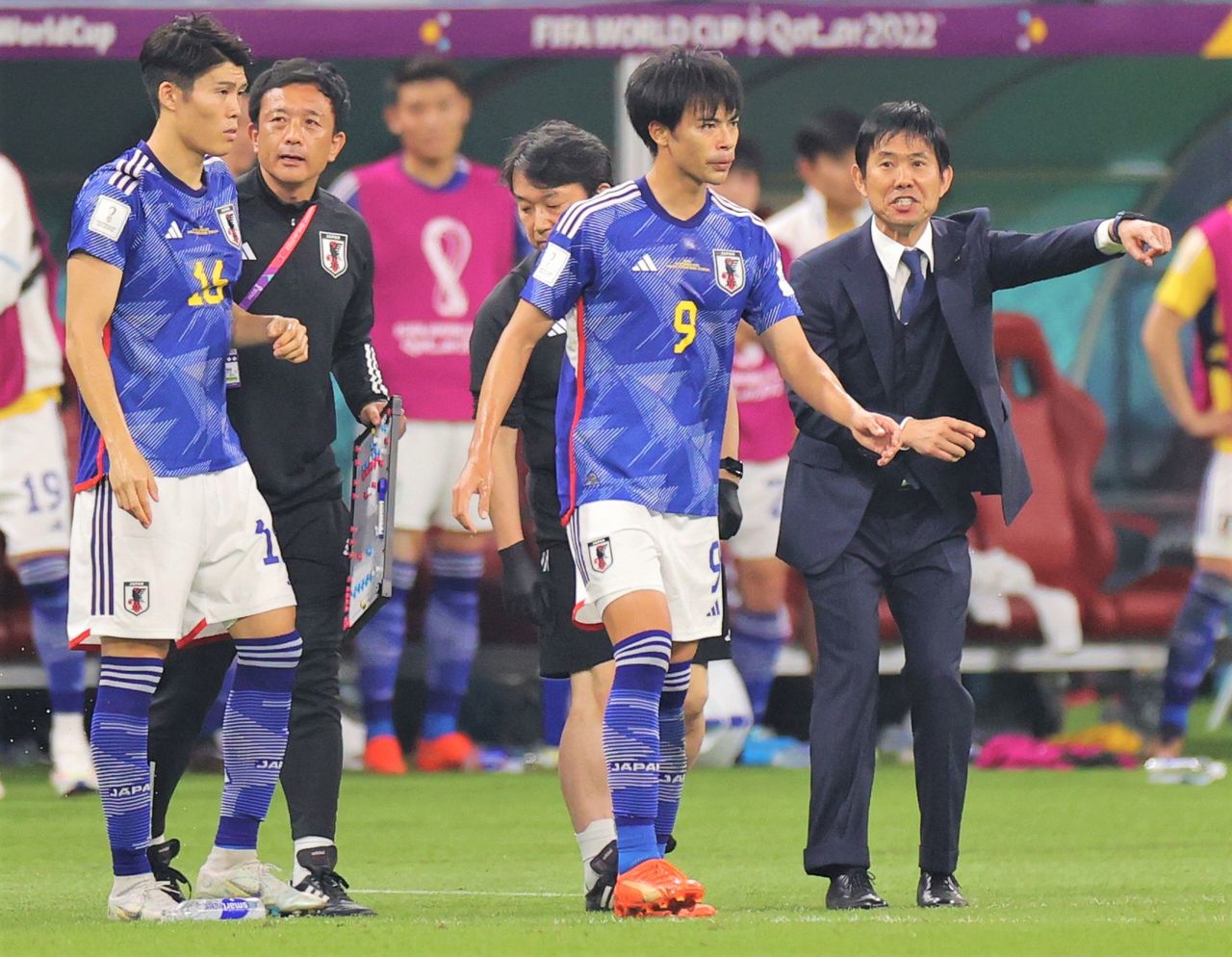 Coach Moriyasu Hajime, right, gives instructions to Mitoma Kaoru in Japan’s match against Spain on December 1, 2022. His effective use of his full squad in wins over Germany and Spain was influential in the decision to keep him on as Japan’s manager. (© Jiji)

In contrast, however, last-16 opponents Croatia were one of several teams in the competition who employed the opposite approach, sticking with a core group of players as much as possible, despite the tight turnaround time between matches. With even the eventual World Cup finalists playing a maximum of only seven games throughout the tournament, a consistent lineup is the best way to promote on-the-pitch understanding in such a relatively short space of time.

However, in its match with Croatia, Samurai Blue was clearly the more mobile and energetic of the two teams. While their wily Eastern European opponents had formulated a strategy based on analysis of Japan’s approach, Moriyasu’s men still managed to create chances. They may not have managed to reach their pre-tournament goal of a place in the quarterfinals, but the fact that Japan was able to go toe to toe with such a strong opponent is a sign of progress in itself.

Even so, with Iran the top-ranked Asian team at this year’s tournament at 20 in the FIFA ratings, Japan and their fellow AFC nations are always sure to find themselves up against higher-ranking opposition at the World Cup finals. Superior conditioning, therefore, is vital in order to overcome such strong opposition, and as Japan demonstrated in Qatar, making the most of the entire squad in order to maintain fitness and intensity becomes a fundamental requirement.

Clear Next Steps for Asian Teams

However, Japan has yet to learn how to overcome the physical demands of the group stage and switch gears to match elite nations as they enter the knockout rounds. While it is not yet clear what will happen in future regarding the five substitute rule that was introduced in response to the realities of football during a pandemic, if the Japanese team is ever to attain its goal of reaching the last 16, fitness management is essential. Though it fell slightly short this time, the team’s approach in this regard was the correct one, and it will be interesting to see how it evolves in the future.

In terms of tactics, a compact, mobile, systematic approach reaped rewards against possession-dominant opposition in the form of Germany and Spain, while against Croatia Japan managed to sneak a goal from a set piece.

The next challenge is how to break down an opponent that is willing to sit back and concede possession. To this end, it seems essential to build upon the strong defensive qualities that have served Japan thus far, while improving circulation of the ball in attacking areas and adding the offensive tactical variation required to find a way through a low block. In all, while Japan and their AFC fellows are still viewed as being among the weaker nations, they have to prepare now if they are to realize a future among the global footballing elite.

They now know what they have to do. And far from being a disappointment, World Cup Qatar 2022 was a tournament to give hope to Asian football.

(Originally published in Japanese. Banner photo: Japan’s players celebrate after beating Spain to secure qualification for the World Cup round of 16 on December 1, 2022. © Jiji.)