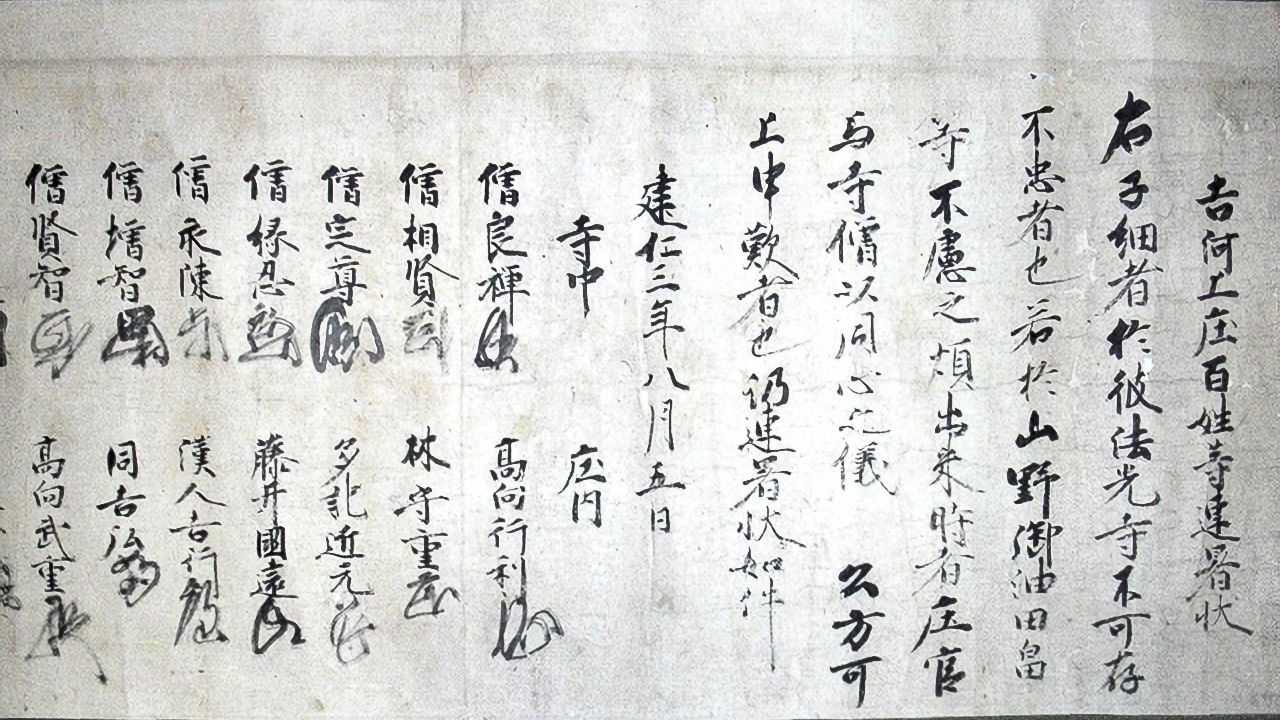 History Culture Society Jan 20, 2023
Visitors to the mountain regions of Hyōgo Prefecture may be surprised to find a significant number of residents with surnames considered typical in the Kantō region around Tokyo, like Fujita, Kuge, Nakazawa, and Sakai. The prevalence of these surnames can be traced back to the Jōkyū War of 1221.

[Kobe Shimbun] The Jōkyū War was instigated by the retired emperor Go-Toba, who raised an army in a failed attempt to overthrow Hōjō Yoshitoki, the regent of the Kamakura shogunate. A speech given by Hōjō Masako, wife of Minamoto no Yoritomo, roused the samurai in the Kantō region, who proved an overwhelming force against Go-Toba.

Morioka Hiroshi, a scholar who specializes in surname research, notes that while there are many instances of surname migration in Japanese history, the Jōkyū War triggered a mass exodus whose effect can still be seen today.

The shogunate succeeded in capturing around 3,000 strongholds of the imperial court and appointed loyal samurai as land stewards, chiefly in western Japan, in recognition of their contribution. This led to the spread of surnames from Kantō within Kansai.

According to Morioka, few samurai initially took up the new land, but following attempted Mongol invasions of Japan (in 1274 and 1281), the shogunate ordered samurai to move to western Japan to secure its defenses. Some of them became the heads of prominent families. The Kikkawa family, moving from Suruga (modern Shizuoka) to Aki (Hiroshima), rose in power to become the local feudal lords. The Ōtomo clan, which migrated from Sagami (Kanagawa) to Bungo (Ōita), were renowned daimyō during the Warring States period (1467–1568).

What aftereffects can be found in Hyōgo Prefecture?

The most common surname in Yokawa-chō, a district in the city of Miki, is Fujita. The origin of the name can be traced to Fujita-gō in Musashi (modern Yorii in Saitama). Fujita Hitoshi, a local historian in Yokawa-chō, notes that there was an imperial manor in the area that was bestowed upon Fujita Yoshikuni by the shogunate following the Jōkyū War.

When Hōjō Yasutoki, son of Yoshitoki, launched his assault on Kyoto, it was Fujita who read out the imperial surrender of Go-Toba. It is believed that part of the Fujita clan shifted to Yokawa-chō after this, as testified to in the Hōkōji Epistle, designated a cultural property by Hyōgo Prefecture.

The Fujita clan died out eventually, but the surname still accounts for some 37% of the population in Yokawa-chō’s Okudani area. It is said that, in the Meiji era, when commoners were required to adopt surnames, the priest of the local temple recommended people to take the name Fujita in honor of the family’s great deeds.

Morioka explains that the surnames Kuge, common in Tanba, and Sakai, in Tanba-Sasayama, also come from samurai appointed as land stewards after the Jōkyū War. Kuge originates with samurai from Musashi’s Kuge-gō (now Kumagaya, Saitama) who moved to Sannan-chō in Tanba. The surname Nakazawa came to the Ōyama area of Tanba-Sasayama from Musashi’s Nakazawa-gō (Honjō, Saitama), and Sakai, prevalent in the Furuichi area of Tanba-Sasayama, also came from the Kantō region.

Another example is the name Adachi, as seen in modern Adachi in Tokyo, after a noble of this name moved to the area of modern Aogaki-chō in Tanba prior to the outbreak of the Jōkyū War. Around 60% of people in the Tōzaka area of Aogaki-chō share the surname Adachi.

There are further examples of samurai from Kantō who migrated to Hyōgo, such as Naganuma Munemasa, who was charged with protecting the domains of Settsu and Awaji. Morioka explains that surnames can give an indication of the origins and exploits of our ancestors. His hope is that people take the time to consider their family roots based on their surname.

(Translated from Japanese. Banner photo: A portion of the Hōkōji Epistle, designated as cultural property by Hyōgo Prefecture, describing the migration of the Fujita clan to Yokawa-chō. Article by Shinohara Takuma. Photograph courtesy of Fujita Hitoshi.)