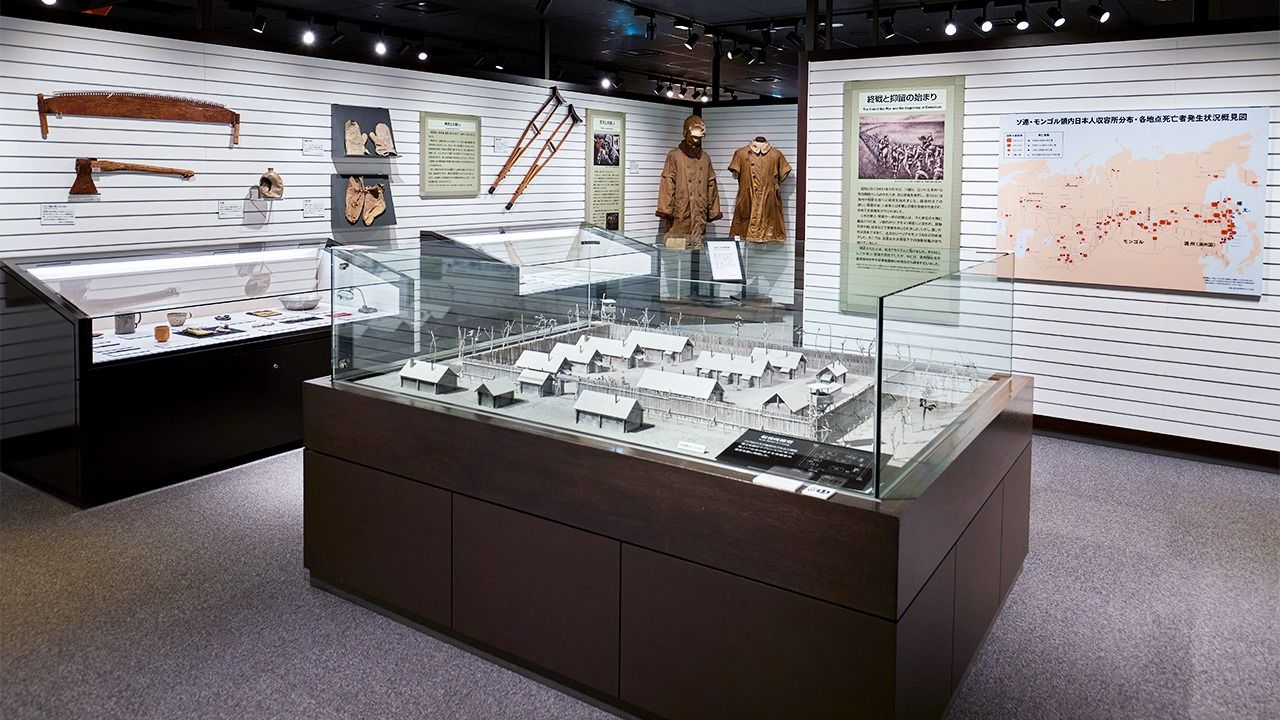 From Siberia with Love: Movie Draws Visitors to Museum to Learn about Soviet Internment of Japanese Soldiers

History Jan 26, 2023
A new film about the Soviet internment of Japanese soldiers after World War II has piqued young people’s interest in the wartime experience and brought an obscure history museum into the spotlight.

A new film about the Soviet internment of Japanese soldiers in Siberia after World War II has stirred young people’s interest in that episode in history and doubled attendance at a small museum dedicated to educating the public about the bitter experience of Japanese soldiers and overseas civilians during and after the war.

In the final days of World War II, the Soviet Union joined the war against Japan in violation of the Soviet-Japanese Neutrality Pact. When Japan surrendered, hundreds of thousands of Japanese soldiers in the Soviet Union and Mongolia laid down their arms and were transported to labor camps in Siberia and other parts of the Soviet Union. Forced to work under extremely harsh conditions, some 55,000 of the approximately 570,000 internees died. Many prisoners waited as long as 11 years to be repatriated.

The Japanese film Rāgeri yori ai o komete (Fragments of the Last Will, also translated as From Siberia with Love), directed by Zeze Takahisa, portrays the hardships and heroism of one such internee, Yamamoto Hatao, and of the wife and children who faithfully awaited his return. Described as a “true love story,” the movie highlights the way Yamamoto clung to his humanity and inspired his comrades with his decency and unflagging hope of repatriation. Starring Ninomiya Kazunari, who began his career as a pop star, the movie has been a hit with younger fans in particular. At the showing I attended in central Tokyo, young adults accounted for about two-thirds of the audience. 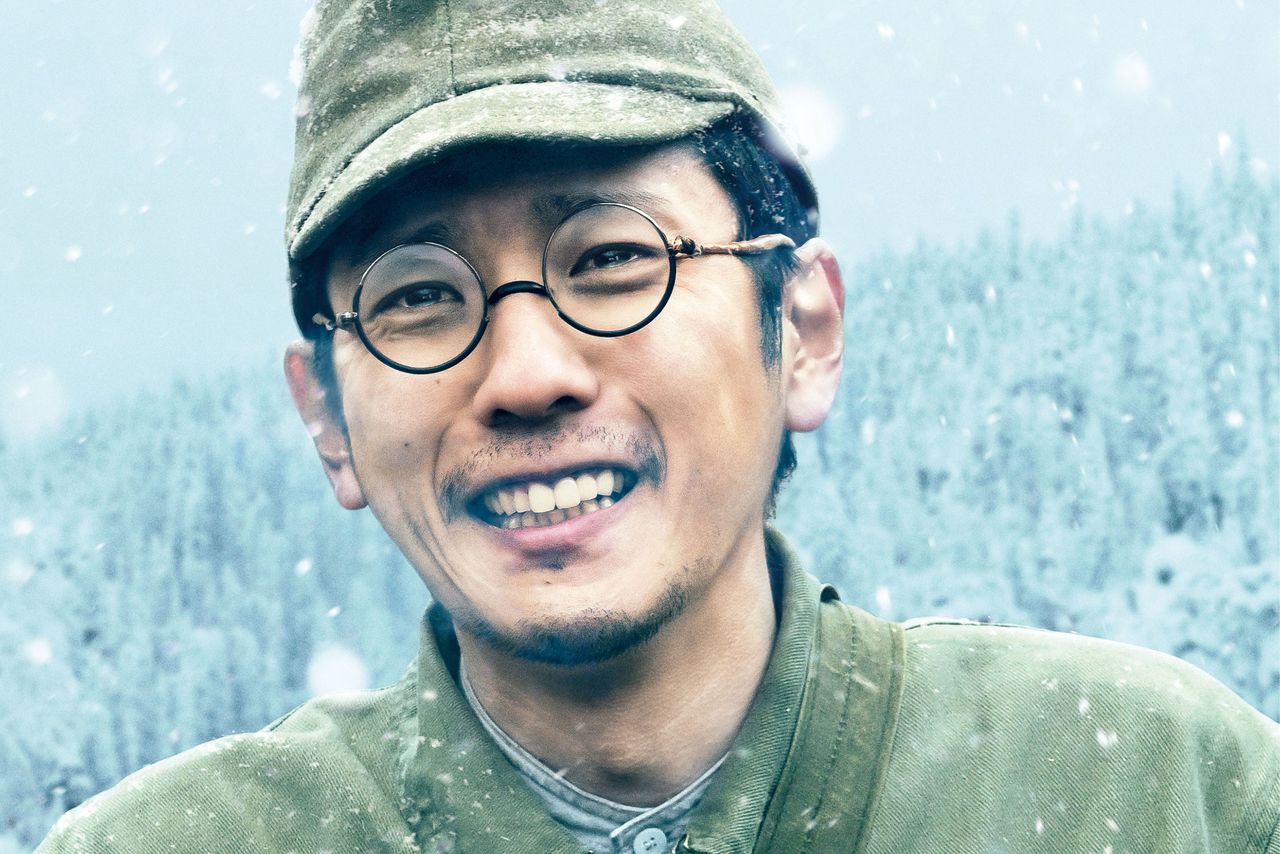 Determined to faithfully replicate conditions in a Siberian labor camp, the film’s creators relied heavily on historical materials and supervision from the Memorial Museum for Soldiers, Detainees in Siberia, and Postwar Repatriates (Heiwa Kinen Tenji Shiryōkan; Masuda Hiroshi, director). The museum, which operates under the aegis of the Ministry of Internal Affairs and Communications, is dedicated to enhancing the public’s understanding of the hardships experienced by Japanese soldiers in World War II and those repatriated from abroad after the war, as well as the many thousands interned in the Soviet Union. Admission to the facility, located in the high-rise Shinjuku Sumitomo Building in Tokyo, is free of charge.

In November 2022, in a tie-up with the film’s producers, the museum opened a special exhibition, “Eiga Rāgeri yori ai o komete no sekai” (The World of Fragments of the Last Will), featuring large-panel stills, costumes, and props from the movie. The exhibition ended January 15, but from January 11 to April 23, the museum will display missives from Yamamoto Hatao (the film’s protagonist) to his wife as part of an exhibition of postcards from internees to their families in Japan.

Attendance began to surge as soon as the special exhibition opened, according to a museum spokesperson. After the movie was released to theaters on December 9, monthly attendance jumped to more than double the previous year’s level. Young people have been a conspicuous component of the surge. They seem especially transfixed by the museum’s models of labor camps and a large diorama depicting prisoners sharing a small loaf of black bread. 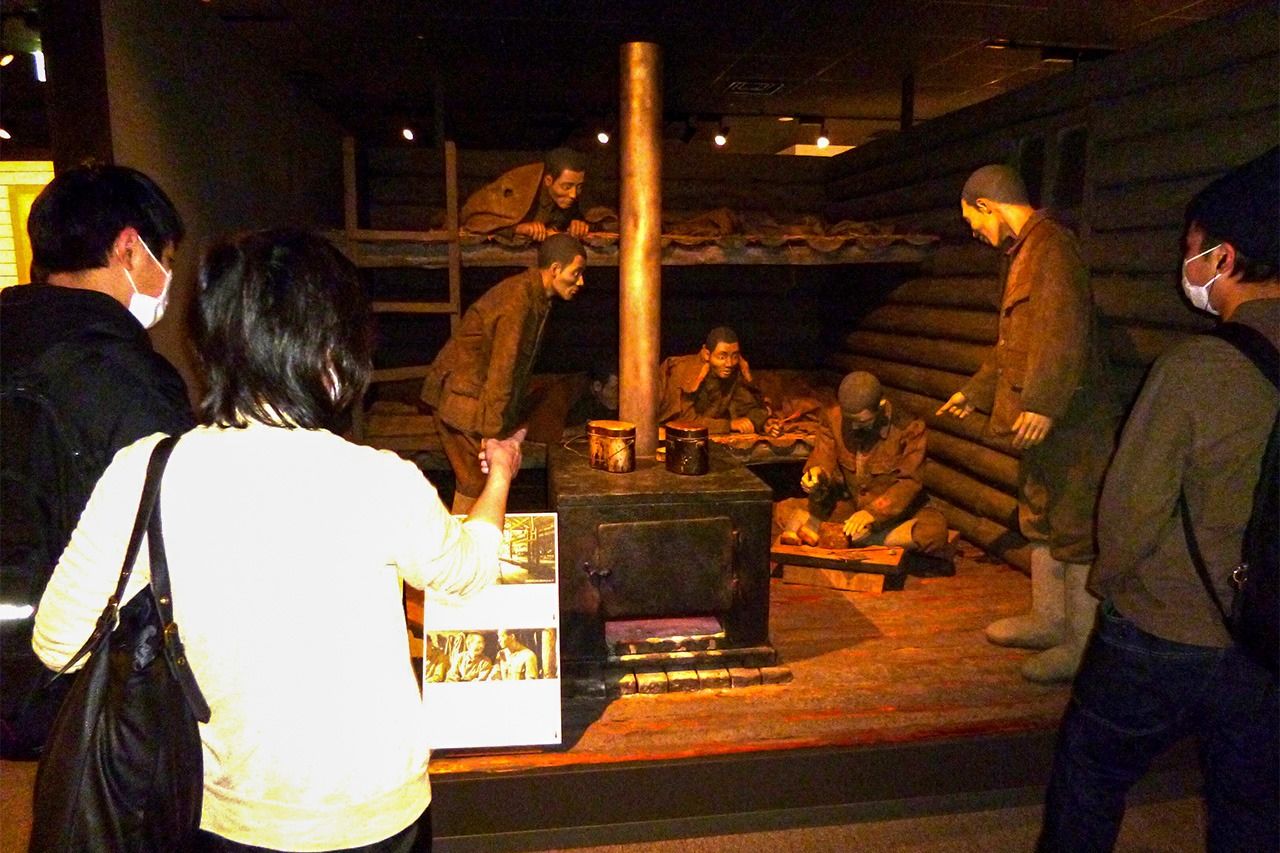 Young visitors to the Memorial Museum for Soldiers, Detainees in Siberia, and Postwar Repatriates gather around a diorama recreating a scene inside a Siberian labor camp. (© Saitō Katsuhisa)

A university student explained her interest. “I’ve heard war stories from my grandparents, but I first learned about the internment in Siberia from the movie,” she said. “I wanted to know more. It bothers me when people say today’s young people have no interest in the war. Peace is precious, but it seems to me that for the sake of peace, we need to know what war is really like.”

Among the comments recorded in the guest book provided for visitors was the following:

“I came to the museum because I was deeply moved by the movie. We can’t let something like this ever happen again. Rather than live our lives in ignorance, we should learn the facts and make sure the same mistake doesn’t occur again.”

Museum Curator Katō Tsumugi has also noticed a dramatic increase in the number of young people filling out the museum’s questionnaire. He credits the movie for the surge in interest.

In addition to exhibits, the museum organizes a variety of events aimed at passing the wartime experience on to the younger generation, including Kataribe no kai, in which Japanese soldiers, internees, and others involved in World War II pass on their memories orally in the tradition of the storyteller-narrators known as kataribe.

Beginning in 2022, the museum embarked on a series of new online programs. Cognizant of widespread reluctance to visit museums amid the COVID-19 pandemic, the organization developed a Virtual Museum website that allows users to enjoy a high-definition virtual tour of the exhibits via computer or smartphone. To connect with schools, the museum launched its Online Peace Education Support Program, which offers 50-minute video classes taught by museum staff, targeting students from fifth grade through high school. In advance of a class, the museum sends each participating school such props as the clothing worn by the soldiers and the black bread fed to prisoners, thus enhancing the classroom lesson with hands-on learning. In this way, the museum’s activities are expanding and evolving.

Testimony of a 97-year-old Internee

Of special interest to museum-goers and students alike is the oral narrative of a 97-year-old survivor of a Siberian labor camp, Nishikura Masaru. Nishikura was drafted in January 1945 at the age of 19, the minimum draft age. When the war came to an end in August, he was disarmed by the Soviet army near the border between the Soviet Union and Korea. Thus began a three-year nightmare. 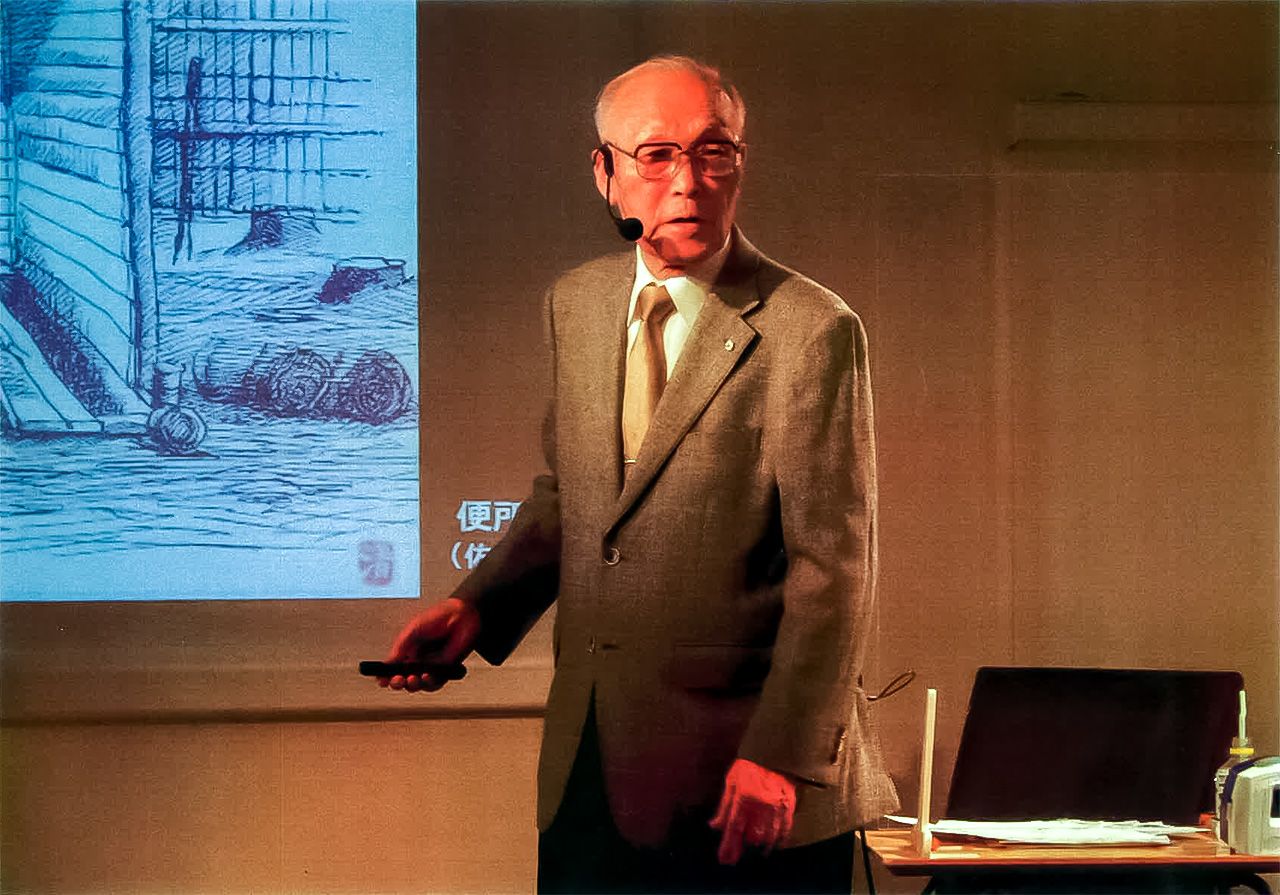 “We were marched into Soviet territory over a period of ten days,” recounts Nishikura. “Then they put us on a freight train, saying we would be sent back to Japan in October. I realized the train was going farther and farther north, which seemed odd. On the fourth day, we arrived at Komsomolsk-on-Amur in the Soviet Far East. In a converted stable, where temperatures fell to minus twenty degrees [Celsius] at night, we soldiers, still in our summer clothes, slept with three men curled up together. We were fed mostly black bread, and very little of it, but we worked hard knowing our ration would be cut if we didn’t meet our quota. But when it came to laying water pipes underground, we couldn’t break the frozen ground however hard we swung our pickaxes.

“As the cold got worse, my comrades were dropping all around me. New Year’s Day of 1946 came, and I thought, ‘Maybe I’ll be able to go back to Japan this year.’ But it wasn’t to be. I made the same wish the following New Year, but it was no good. I kept telling myself, ‘You can’t die in this place.’ Finally, in July 1948, I was able to return home.

“For many years I said nothing to other people about my three years interned in Siberia. But at the age of ninety, after visiting the Memorial Museum for Soldiers, Detainees in Siberia, and Postwar Repatriates, I began telling my story as a kataribe. I decided to do it in hopes that today’s youth will never have to experience what I did. Young people seem deeply interested in what I have to say.”

Against the background of the ongoing war in Ukraine, Nishikura wonders aloud why war persists in the world. “It’s such a terrible shame. I pray that the world, that Japan, doesn’t head down the wrong path,” he says.

On December 17, 2022, a week after the release of Fragments of the Last Will, the museum held an on-site event offering a virtual-reality experience of internment in a Siberian labor camp. Students at Tama University (Tama, Tokyo) had developed the VR labor camp using the museum’s artifacts and other materials. Using laptop computers connected to the Internet, each participant, represented by a boy or girl avatar, wandered through the cold, snowy camp. Users were able to enter the barracks where the Japanese soldiers slept and ate and survey the camp from the viewpoint of a Soviet guard in his watchtower. The software gave participants a visceral appreciation of the harsh conditions at the labor camps. 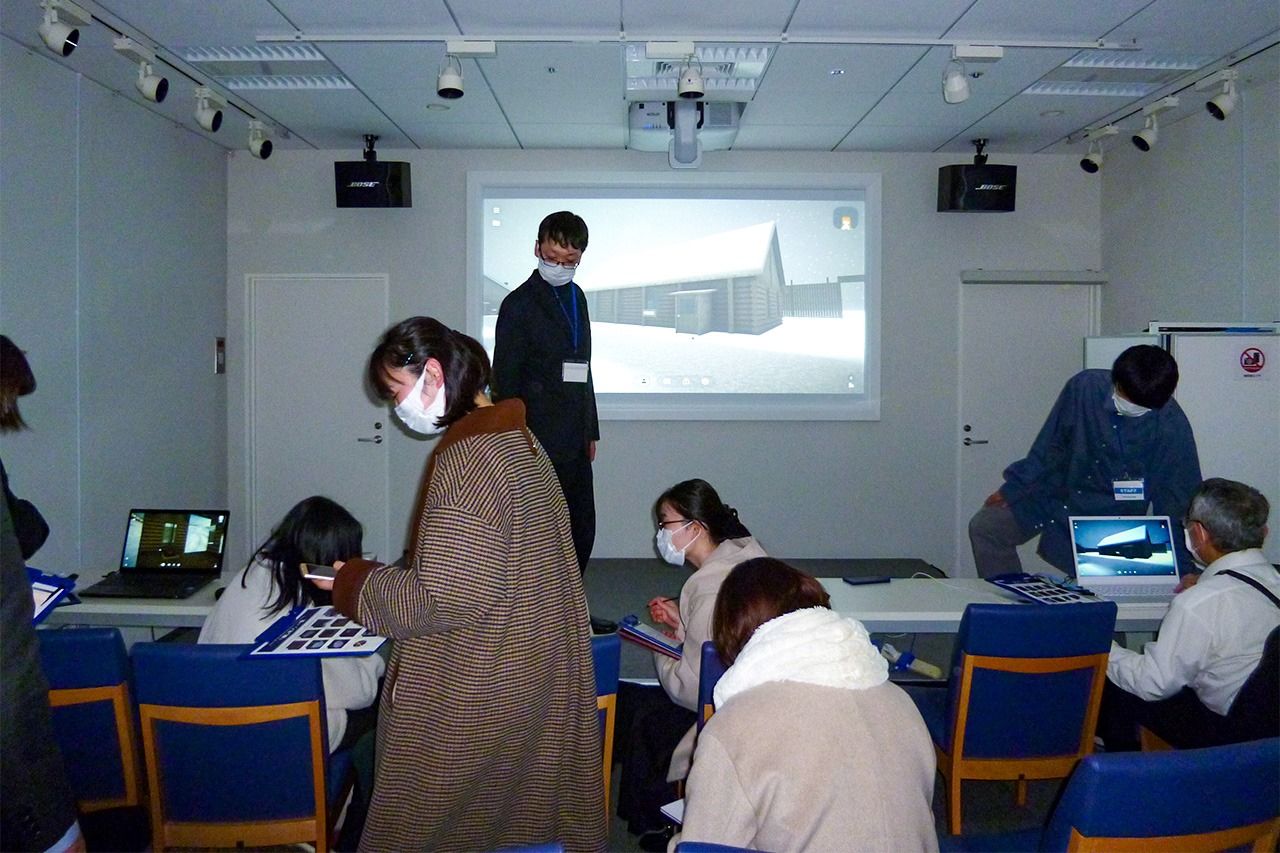 Visitors to the Memorial Museum for Soldiers, Detainees in Siberia, and Postwar Repatriates take a virtual-reality tour of the kind of Siberian labor camp where Japanese soldiers were interned after World War II. (© Saitō Katsuhisa)

A member of the VR development team, fourth-year student Hama Daiki, spoke enthusiastically of the project. “I heard things about the war from my grandparents, so I was interested from the start. It was a really valuable experience visiting the museum over and over to gather materials, plus having the opportunity to hear Mr. Nishikura, the kataribe, tell his story first-hand.”

The idea of creating a VR labor camp experience originated with Associate Professor Kobayashi Akina of Tama University, who specializes in the history of Japan-Russia relations and is researching the internment. Her aim is to preserve the memory of the Siberian internment and pass it down to the younger generation.

Asked whether interest in war is on the rise among Japanese youth, Kobayashi answered, “I do feel it’s on the rise. But the reason, as I see it, is not so much awareness of World War II as the impact of the war in Ukraine and the opportunities young people now have on a daily basis to see and hear about people killing one another with weapons. The war has also provided occasions for people to think twice about relying entirely on Internet sources for their understanding of a situation, and to guard against fake news. As a result, I think young people are beginning to grasp the importance of studying history.”