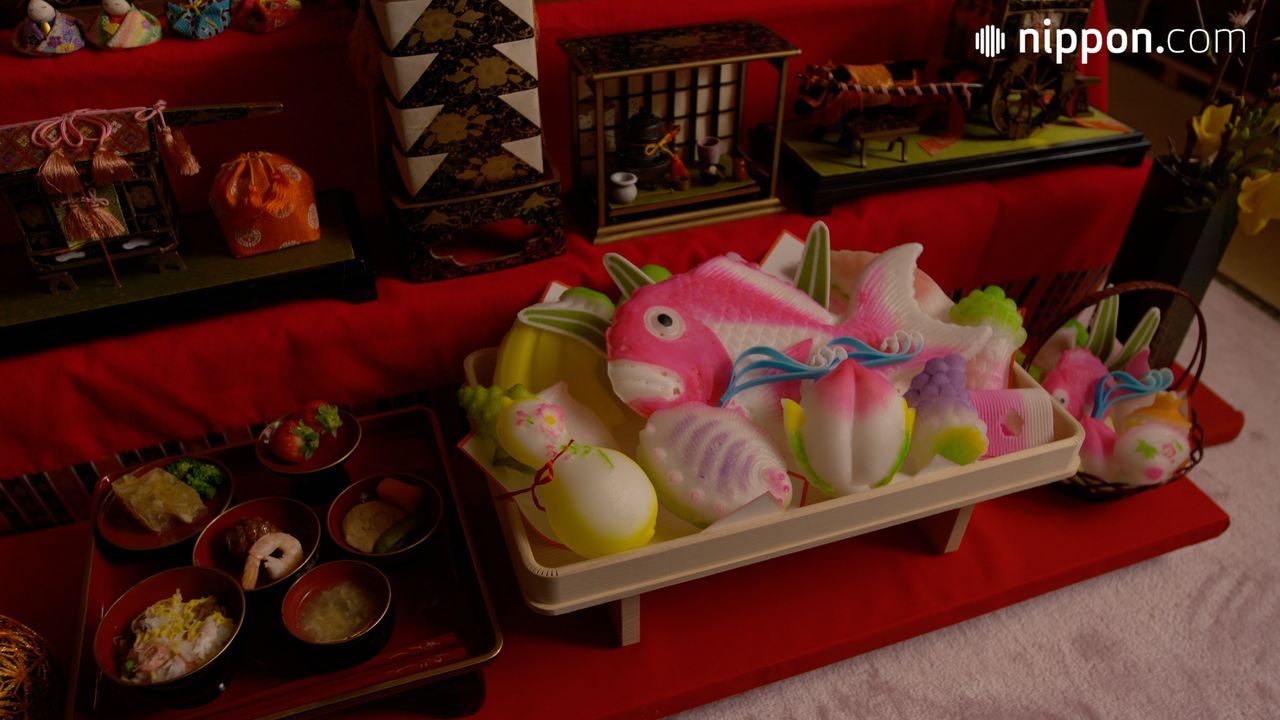 Spectacular Sweets for the Doll Festival in Kanazawa

The city of Kanazawa, Ishikawa, has been home to countless cultural activities and artistic traditions since its days as a key regional castle town under the Tokugawa shogunate in the Edo period (1603–1868). One of the sweetest such traditions is the production of kinkatō, sugary sweets placed as an offering before the intricate dolls of the hinamatsuri, or doll festival.

Kinkatō candies are crafted in the shape of a wide variety of items held to bring good fortune, including sea bream and other fish, vegetables and mushrooms, fruits, and other bounties of the land and sea, along with mandarin ducks, gourds, manekineko cat figurines, and other items signifying good fortune. With their lively colors applied to a base of pure white solidified sugar, they are a vivid herald of the arrival of spring in Kanazawa each year.

The only ingredients that go into these sweets are sugar and water. Coarse zarame Japanese sugar is mixed with water to form a sticky mixture that is boiled down and poured into wooden molds. Artisans keep careful watch on the candies as they cool, chipping away excess sugar from their edges and preparing to remove them just before they adhere to the wood surface.

Only a relatively thin mixture will produce the most prized translucent candies, but these are brittle as a result, requiring a high degree of experience and skill to pull off. Once completed, the candies are set out to dry and painted with food coloring.

Both kinkatō and konpeitō, a tiny prickly-shaped form of sugar candy, come originally from aruheitō, thought to come (along with their name) from alféloa, a candy brought by Portuguese sailors some centuries ago. Once kinkatō was made throughout Japan, but today the confectioners of Kanazawa have a near-monopoly on the production of this traditional treat.

The doll festival, observed on March 3 each year, celebrates female children and prays for their good health. The sets of ornate dolls arrayed for this event are generally packed up and put away as soon as the day is finished, inspired by a traditional belief that the girls in a household where the dolls are kept out too long will have to wait until later in life to marry. In Kanazawa, though, they are kept on display until well into April, perhaps because of a lingering observance of the old lunar calendar for traditional events. Once the displays are finally taken down, though, the kinkatō does not go to waste—it is broken into pieces for children to enjoy as a snack or used to sweeten stewed dishes and zenzai, a sweet stew of red beans often served with mochi rice cake.

(Originally published in Japanese. Created in cooperation with Kanazawa Cable Television. Video: Kinkatō sweets on display with traditional dolls at the Seisonkaku, a former samurai villa in Kanazawa, Ishikawa.)