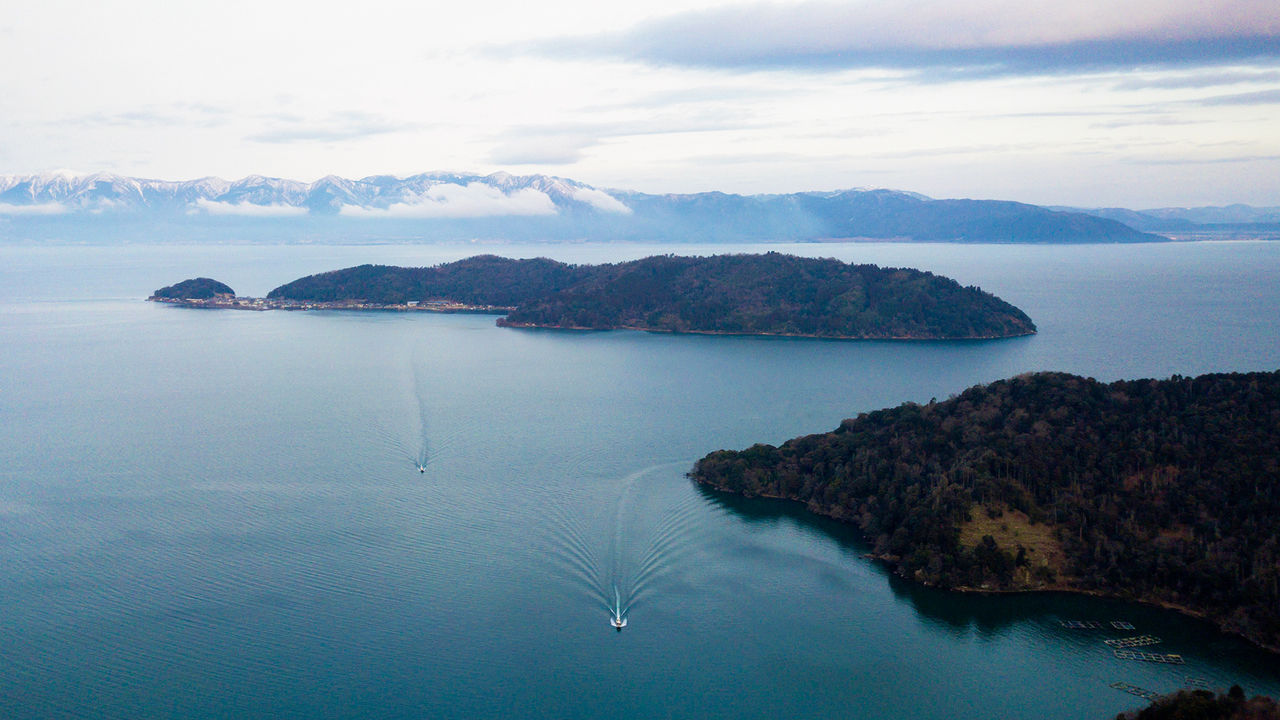 Guide to Japan Apr 25, 2018
Three Reasons to Go to Okishima:
· Floating on the placid waters of Lake Biwa in Shiga Prefecture, Okishima is the only populated freshwater island in all of Japan.
· The island is famous for funazushi, an ancient form of sushi dating from the Nara Period (710–794) made with a type of carp native to Lake Biwa.
· Covered in woods, the island offers rich natural scenery, including spring blossoms and autumn foliage.

Visitors to Okishima, the largest of Lake Biwa’s several islands, will find abundant natural, cultural, and culinary attractions. The island lies about 1.5 kilometers off the eastern shore of the lake in Ōmihachiman, Shiga Prefecture. It supports a community of about 300 residents and is Japan’s only inhabited freshwater island. Ferries from the port at Horikiri take 10 minutes to reach the fishing harbor on the southwestern side of Okishima. Tourists disembarking from the ferry will find a quaint village with rows of homes along with an elementary school, daycare center, and post office, but not a single car or stoplight. Instead of driving, many residents traverse the narrow roads of the tightly packed community on tricycles, using the three-wheeled contraptions for neighborhood errands as well as to haul burdensome loads.

Okishima is famed for its numerous feline inhabitants, earning it the appellation “cat island.” These whiskered residents can be found strolling the waterfront, enjoying a sunny afternoon cat nap, or in countless other states of rest or motion. Acclaimed animal photographer Iwagō Mitsuaki has produced several works featuring the island and its furry population. 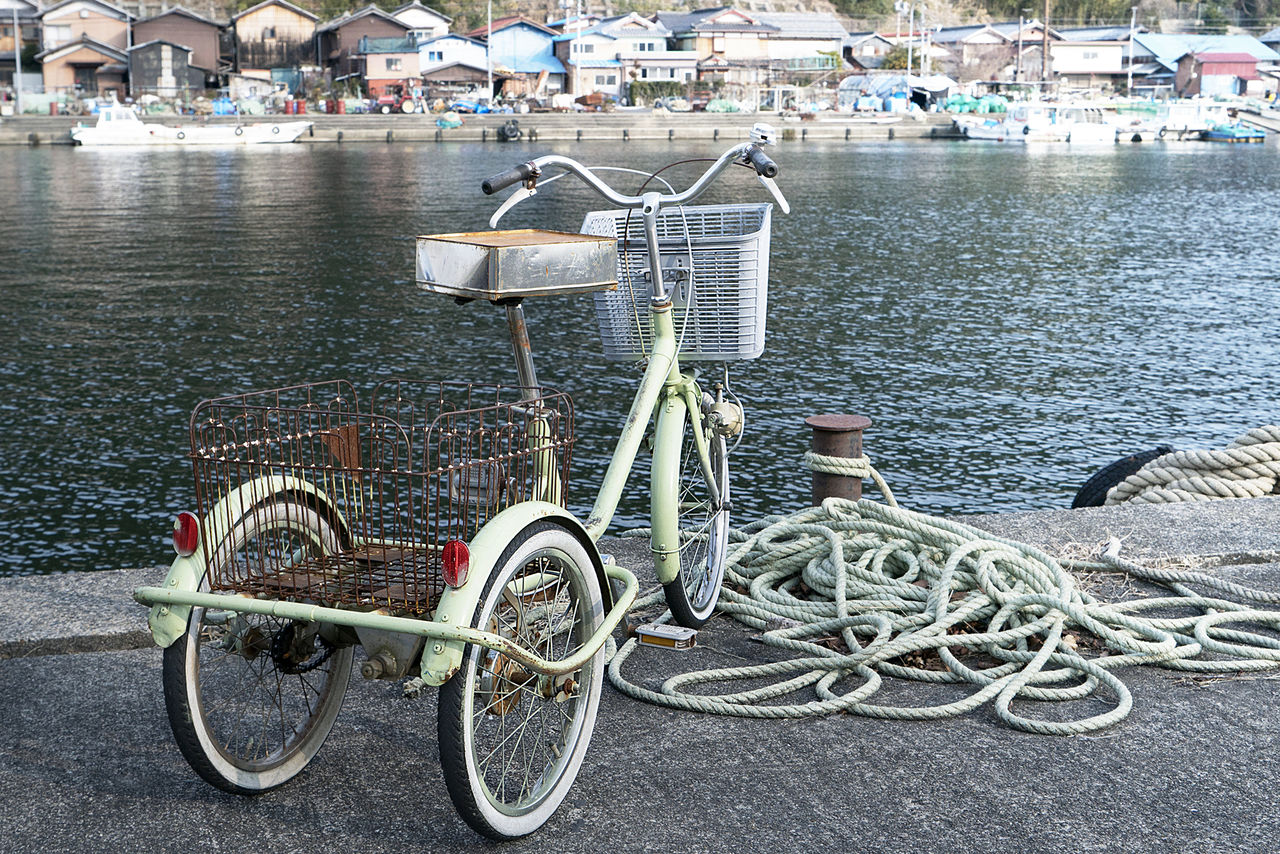 Tricycles are a popular mode of transportation on Okishima. 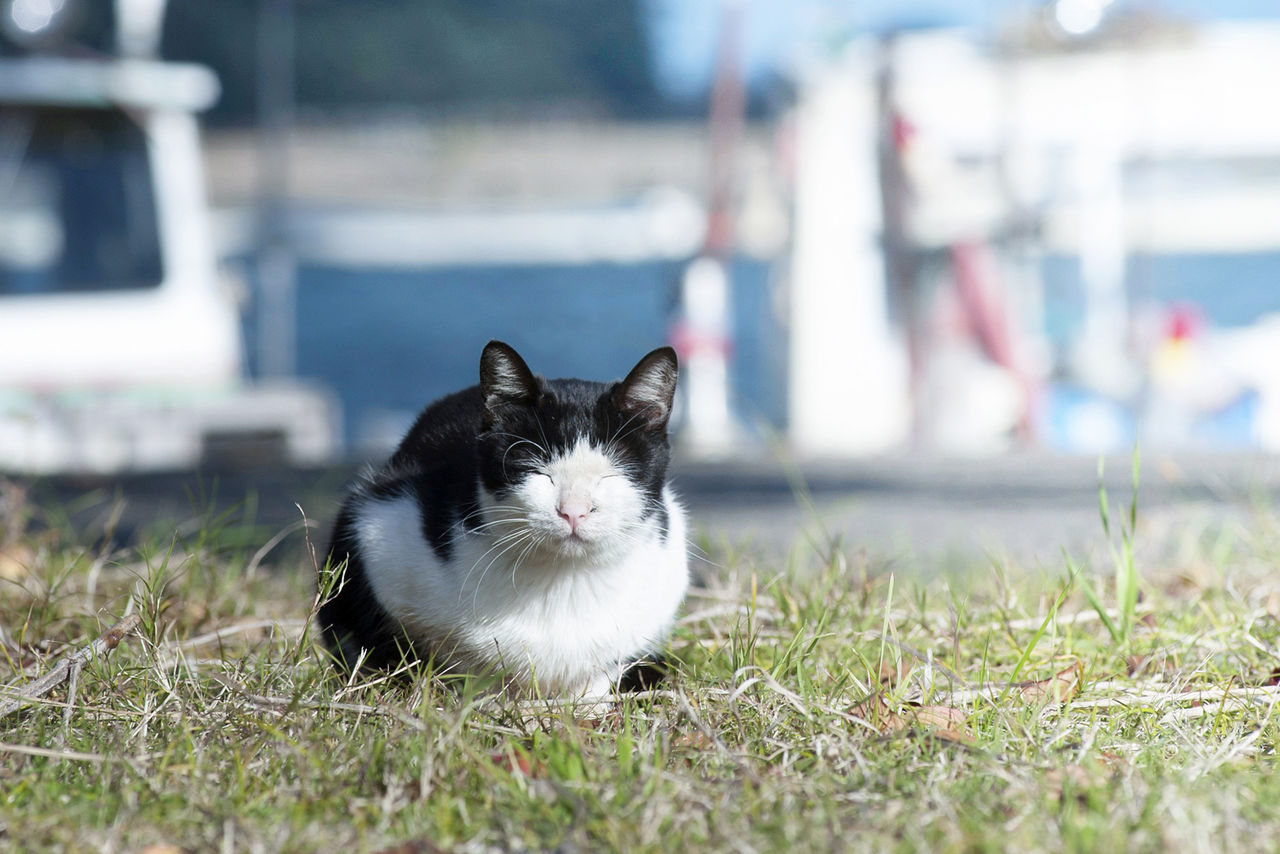 Delights for the Eyes and Taste Buds

The culinary delights of Okishima are many, but the island is best known for funazushi, an ancient form of sushi made with a native variety of crucian carp known as funa. The process of making the aromatic dish has remained unchanged for over 1,000 years. First, fish caught in spring in the surrounding waters are cured with salt for two to three months. Next, they are then placed between layers of cooked rice and left to ferment for a few months more. If all goes well, the pickled funa will be ready to eat in the fall or winter. Unlike other varieties of sushi, though, the rice is discarded and only the fish is consumed. Funazushi will keep for years and historically was prized not only for its flavor but also as an important food source during lean times. 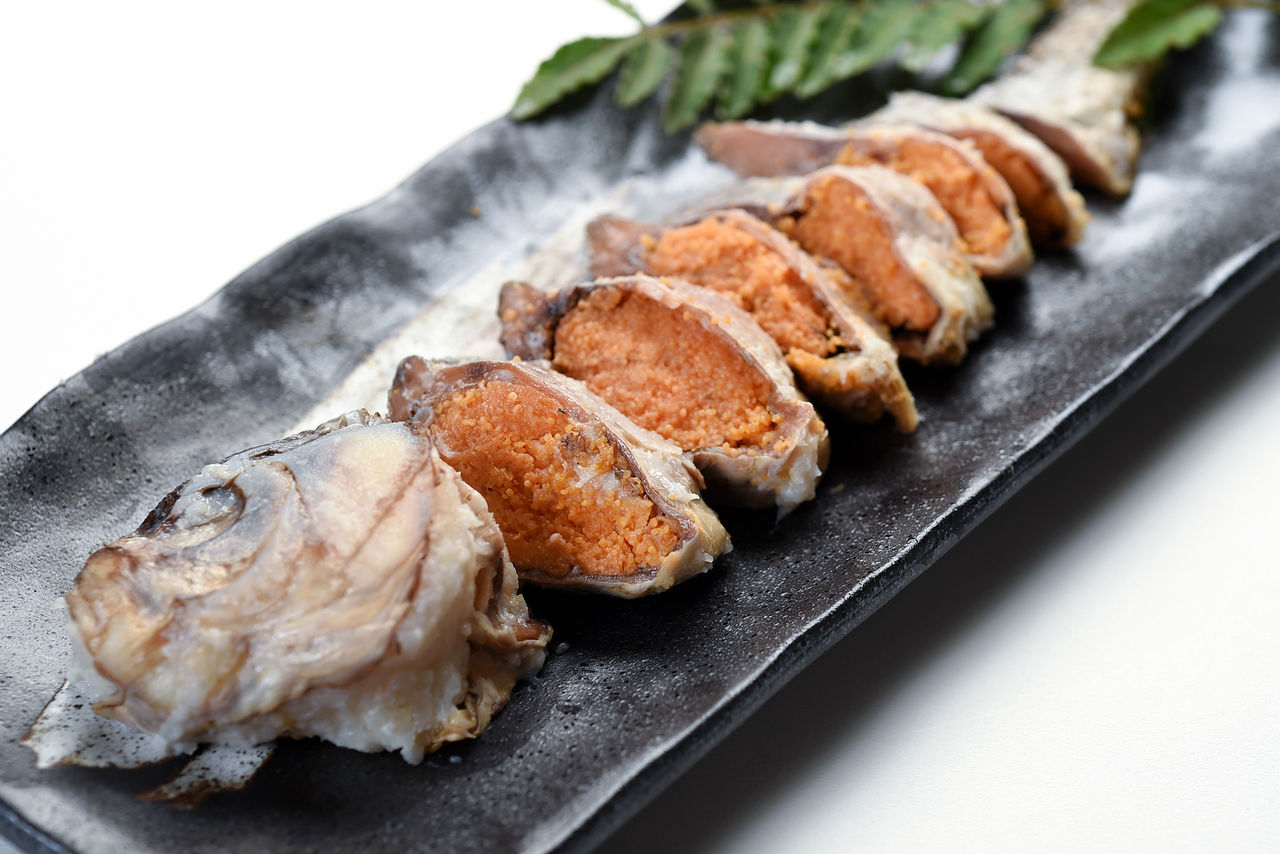 A local delicacy, funazushi dates from ancient times and offers diners a distinct taste and aroma.

Okishima also offers different seasonal attractions. In springtime visitors can admire rows of blossoming cherry trees along the shoreline and taste such regional dishes as chirashizushi made with Biwa trout and donburi, seasonal vegetables and fish served over rice, at the island’s annual Sakura Festival. 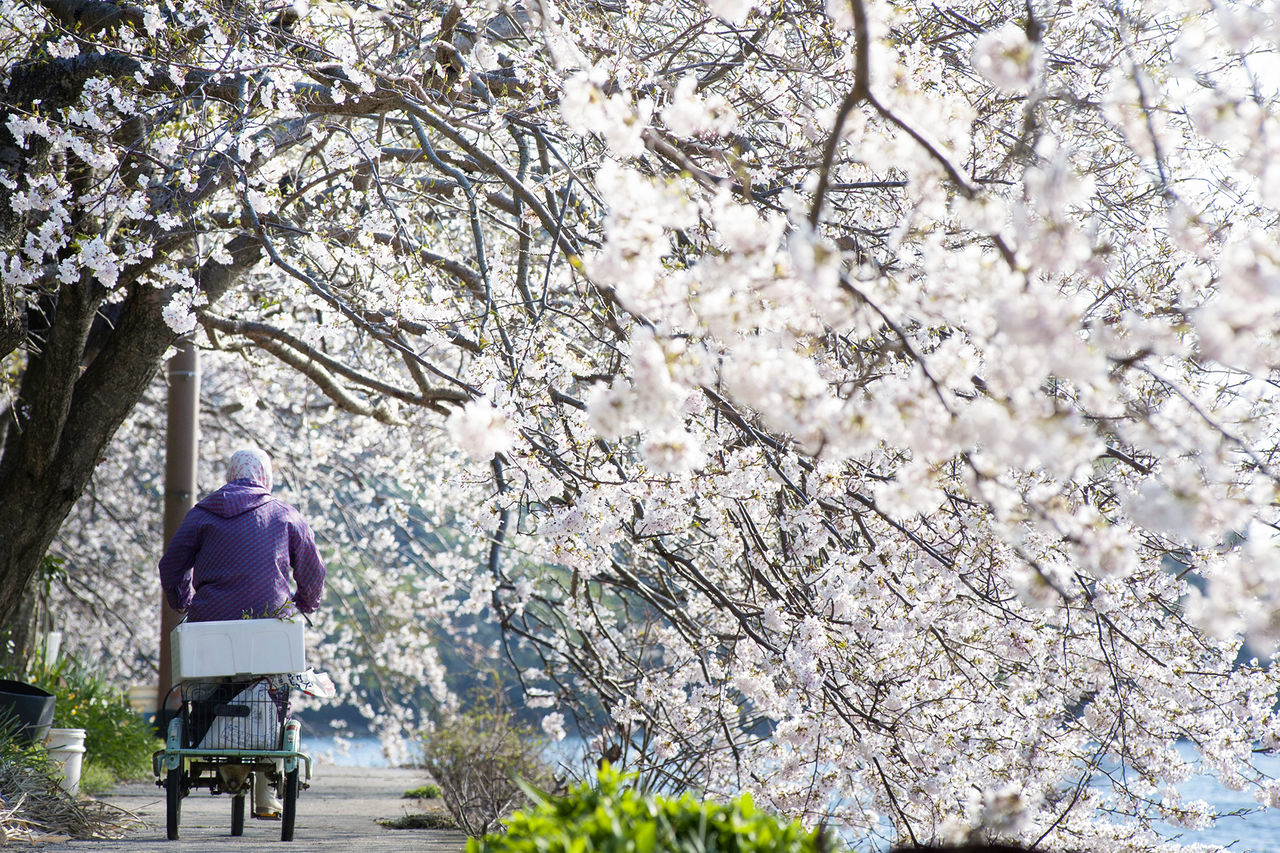 Cherry blossom form a tunnel along the shoreline.

During the warm summer months tourists can enjoy a respite from the heat by hopping a leisurely cruise around Lake Biwa. The local ferry company also teams up with the island’s fishery on a boat tour that includes the chance to make funazushi. Fall visitors can savor autumn foliage as the island’s many forested areas take on stunning seasonal hues. 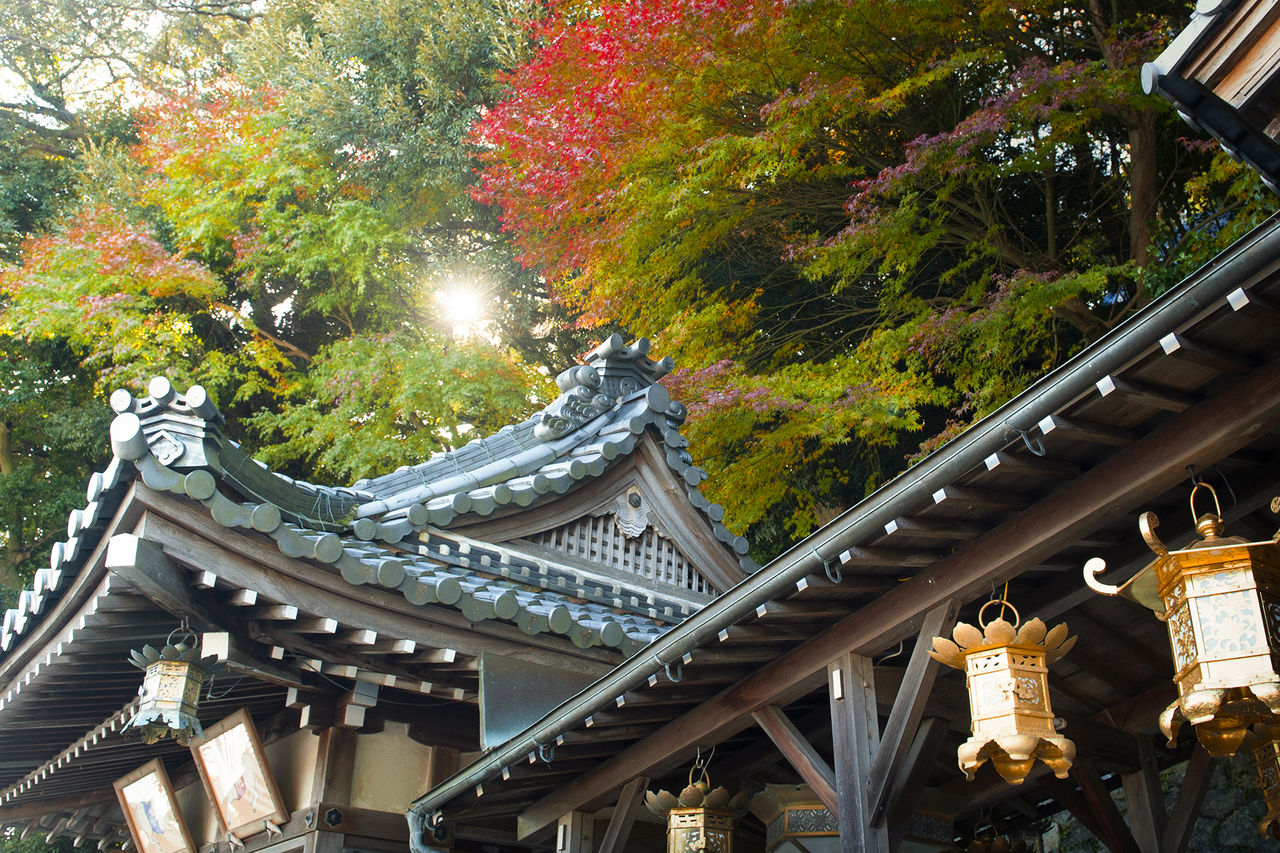 The confines of the Okitsushima Shrine in early autumn.

From JR Ōmihachiman Station, take the Ōmi Railway bus for Ōmi Holiday Village via Chōmeiji and get off at Horikiri Port. The ride takes around 30 minutes and costs ¥710.

The ferry from Horikiri Port takes around 10 minutes to reach Okishima and costs ¥1,000.