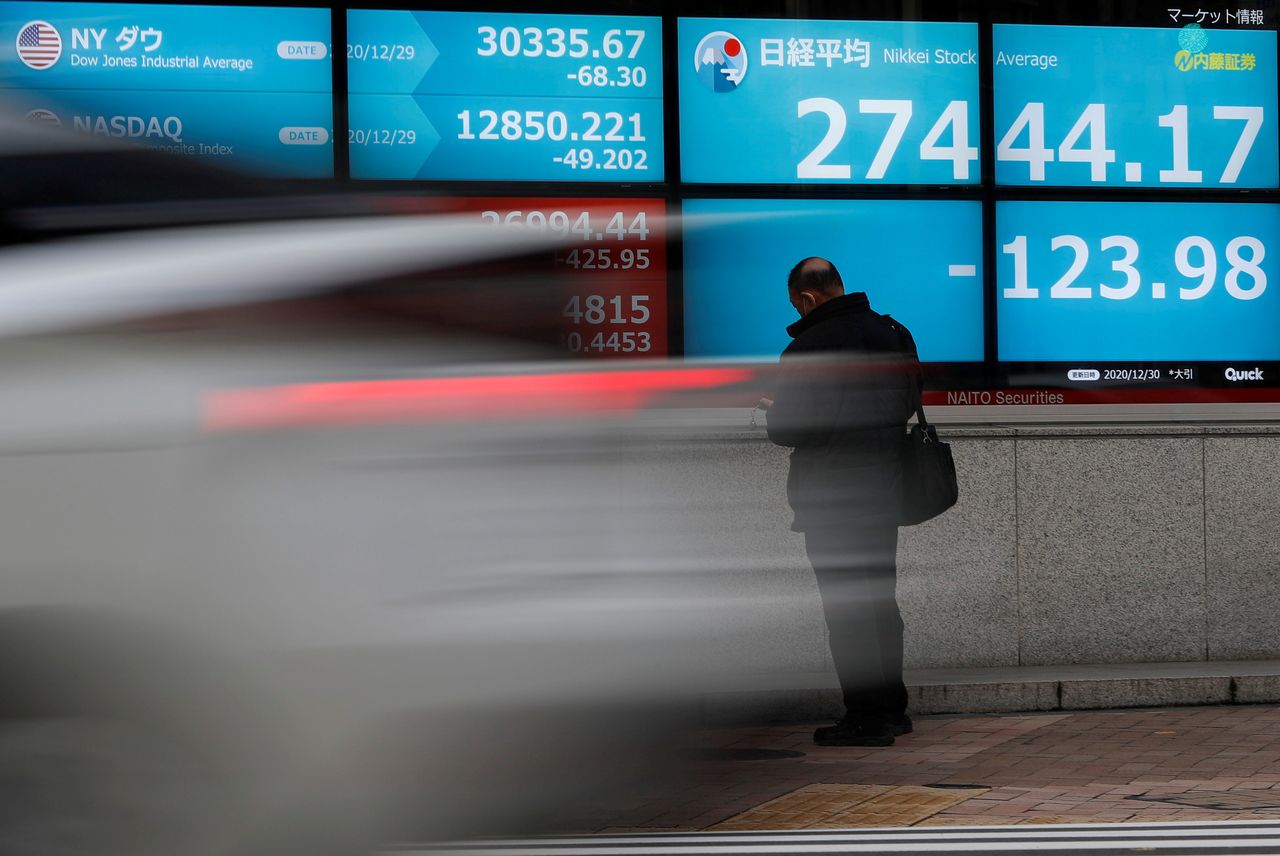 FILE PHOTO: A man stands in front of a screen displaying Nikkei share average and the world’s stock indexes outside a brokerage, amid the coronavirus disease (COVID-19) outbreak, in Tokyo, Japan December 30, 2020. REUTERS/Issei Kato/File Photo

By Junko Fujita and Kevin Buckland

TOKYO (Reuters) - A scorching rally in Japanese shares that appeared to have run ahead of economic prospects has stalled, but analysts are betting it will resume as early as mid-year as the country’s heavily cyclical stocks thrive on global growth.

A world-beating 33% rally in the Nikkei 225 from the end of October has faltered around the 30,000 mark since mid-February, even as other major stock indexes reached for new highs almost every week, led by U.S. equities.

Faith in the recovery from the COVID-19 pandemic that had made the Nikkei the darling of investment bets on global reflation has faltered. Japanese investors have turned cautious about pushing the index back to levels not seen since the bubble economy burst in the early 1990s.

Japan’s own economic outlook has also dimmed, with Tokyo in a third state of emergency and the pace of vaccinations well behind global peers. Only 1% of Japan’s population has been vaccinated, compared with at least 40% in both the United States and Britain, according to a Reuters tracker.

Despite those headwinds, Nomura, Societe Generale and Nikko Asset Management are among those predicting a rally to as high as 32,000 in the coming months.

Japan is in the middle of corporate earnings, and Ikeda predicts strong guidance from energy, iron and steel, and transportation equipment companies – which are tied to global growth -- will stir a turnaround in sentiment that will be further buoyed once the pace of vaccinations picks up by June.

“I think the mood will change very clearly, that’s my bullish view,” he said.

“The reflation trade has further to go,” he said.

Meanwhile, Nikko Asset Management’s Tokyo-based chief global strategist, John Vail, sees the Nikkei rallying to 31,500 once the Tokyo 2020 Summer Games, due to begin in July, are out of the way.

“Japan is going to have to sacrifice its economy and its happiness for a while to ensure a safe Olympics,” he said, explaining that Japan is being careful about reopening its economy in order not to risk a flare-up in infections.

But he sees that lag as an opportunity to play catch-up subsequently, with vaccinations also picking up pace by that time.

The Nikkei is down 5% from a Feb. 16 peak in a ferocious selloff that saw Japanese institutional investors shedding some 5.16 trillion yen ($47.4 bln) of shares so far this year, including almost 50 billion yen by insurers in the latest week, which was the most in nearly two years, according to Tokyo Stock Exchange data.

NLI Research Institute’s Tokyo-based chief equity strategist, Shingo Ide, takes the opposite view to Nomura, blaming inflated earnings expectations for the Nikkei’s struggles. That was apparent earlier this month, when shares of electric-motor maker Nidec and robot manufacturer Yaskawa Electric plunged even after announcing strong results. “The Nikkei hit 30,000 too early,” he said, adding that based on Japanese companies’ price-earnings ratios, the gauge should be around 27,000.

Yet, as the U.S. expansion continues apace and China’s growth remains robust, the Nikkei will claw its way back to 30,500, according to Yoshihiro Takeshige, general manager at the investment management department of Asahi Life Asset Management.

“It’s just a matter of time,” he said. “The environment surrounding Japanese manufacturers is improving.”

Scott Gilchrist, who manages an A$650 million ($503 million) portfolio of Japanese and Korean stocks at Australia’s Platinum Asset Management, is also staying sanguine.

“Investor psychology has weakened a bit, but it hasn’t changed what the businesses are seeing,” he said.

“Japanese corporates have had it pretty tough for two or three years, and we’ve had six months or a year of half-decent times, so I think it would be quite surprising if the cycle ended so soon.”