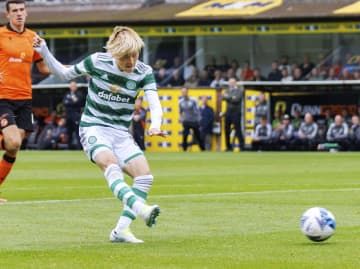 Kyogo Furuhashi bagged a hat-trick before halftime to spark Celtic to a record-breaking 9-0 demolition of Dundee United in the Scottish Premiership on Sunday. The Japan forward extended his scoring streak to four straight games for unbeaten league leaders Celtic, who also got a hat-trick from Israel attacker Liel Abada in the club's biggest ever away win in the league. Japan midfielder Reo Hatate was also in the Celtic starting lineup, while Samurai Blue forward Daizen Maeda came off the bench in the second half for former Yokohama F Marinos manager Ange Postecoglou's side. Furuhashi struck th...
Click for full story