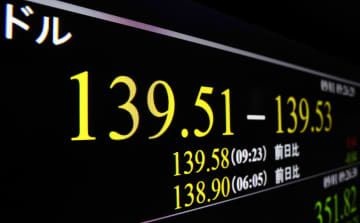 The Japanese yen fell Thursday to a fresh 24-year low in the 139 zone against the U.S. dollar in Tokyo after a Federal Reserve official's hawkish remarks fueled speculation that the interest rate gap between the United States and Japan will widen. The Japanese currency weakened to its lowest level against the dollar since September 1998 after hitting 139.38 on July 14. Tokyo stocks were sold in the morning as investor sentiment was dented after U.S. shares fell for the fourth straight session on concerns over the impact of U.S. monetary tightening on the world's largest economy. The 225-issue ...
Click for full story