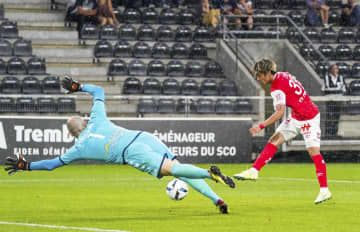 Japan forward Junya Ito scored for the second straight game in France's Ligue 1, putting visiting Stade Reims up 2-0 at the half in their 4-2 away win against Angers on Wednesday. "As a forward, I should get results, so I'm happy to have scored," Ito said at Raymond-Kopa Stadium after his fourth game for his new club. Seconds before the half, Ito received a through pass just outside the area, lost control of the ball momentarily after taking a shove from a defender, but recovered to fire under the sprawling goalkeeper. Ito, whose attacking flair down the right was a key to Japan's qualifying f...
Click for full story