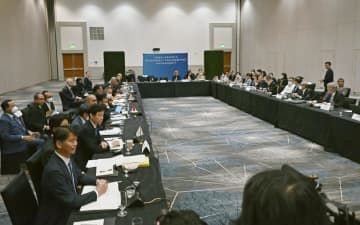 Ministers from 14 member states of a U.S.-led Indo-Pacific initiative began a two-day meeting Thursday in Los Angeles, hoping to declare the start of formal negotiations for codifying a rules-based economic order in the region where China is increasing its clout. In the first in-person ministerial gathering of the Indo-Pacific Economic Framework, or IPEF, participants are expected to release a ministerial statement containing an agreement on cooperation for recovery of supply chains of vital products, such as semiconductors and critical minerals, in the event of disaster and contingency. The v...
Click for full story