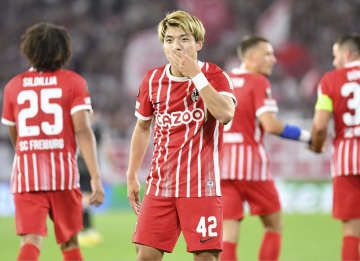 Japan's Ritsu Doan scored the winner as Freiburg beat Qarabag 2-1 in Group G of the Europa League on Thursday, with Takefusa Kubo also starring for Real Sociedad in their 1-0 win at Manchester United in Group E. Vincenzo Grifo scored a seventh-minute penalty for Freiburg before attacker Doan doubled the home side's lead in the 15th minute when he cut in from the right and guided a low effort into the far bottom corner. The German outfit conceded in the 39th minute when Marko Vesovic scored from distance but held on to edge their Azerbaijani opposition. Kubo took center stage at Old Trafford, c...
Click for full story