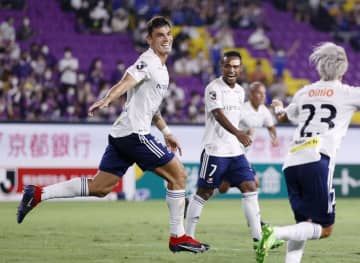 Goals from defender Eduardo and striker Elber on either side of halftime and some strong defending sent Yokohama F Marinos five points clear at the top of the J-League first division after Wednesday's 2-1 away win against Kyoto Sanga. With both teams attacking furiously in the opening minutes, Eduardo headed in a corner in the 25th minute as Marinos exploited a pair of defensive lapses from the hosts at Sanga Stadium. The corner came after a blocked shot was made possible when a defender failed to collect a pass, causing keeper Naoto Kamifukumoto to glare at his teammates and suggest they keep...
Click for full story