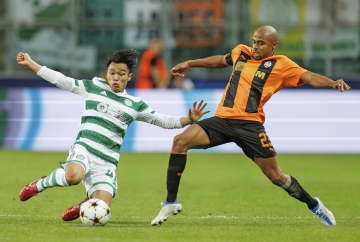 Japan midfielder Reo Hatate was denied his first Champions League goal as Celtic drew 1-1 against Shakhtar Donetsk in Group F on Wednesday. Hatate was initially credited with the 10th-minute goal when he latched onto a Sead Haksabanovic through ball and guided his left-footed effort into the net from a tight angle via a slight deflection off Artem Bondarenko. But it was later credited as an own goal by the Shakhtar midfielder. "I'll keep working and hope to score one that is legitimate," said Hatate. Mykhailo Mudryk fired high into the net on a counter in the 29th minute for Shakhtar, the Ukra...
Click for full story