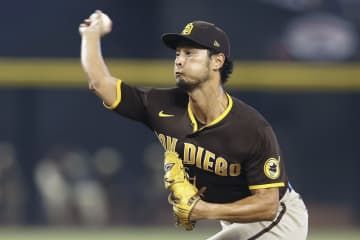 Yu Darvish threw six innings of one-hit ball to earn his 15th win of the season Sunday as the San Diego Padres beat the Arizona Diamondbacks 6-1. Darvish (15-7), who won his fifth straight start, began with four 1-2-3 innings, moving within a win of his MLB-best 16 from his 2012 Texas Rangers debut. His career high is 18 achieved with the Nippon Ham Fighters of Japan's Pacific League in 2011. A two-run first-inning Manny Machado home run, a third-inning sacrifice fly and a Juan Soto fifth-inning solo shot made it 4-0 before Darvish faced his only jam in the bottom of the fifth. With two outs a...
Click for full story