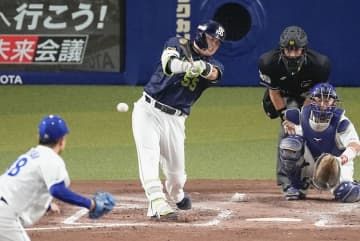 Japan's most highly anticipated home run in years has yet to leave Munetaka Murakami's bat, but his Yakult Swallows moved closer to their second straight Central League pennant with a 6-2 win over the Chunichi Dragons on Wednesday. The Swallows' win at Vantelin Dome Nagoya and the second-place DeNA BayStars' 2-1 loss to the third-place Yomiuri Giants increased Yakult's lead to seven games. The Swallows' magic number to clinch the pennant dropped to four. Murakami, homerless for five games since hitting his 55th on Sept. 13, is in a four-way tie for the second most in a season, along with Japan...
Click for full story