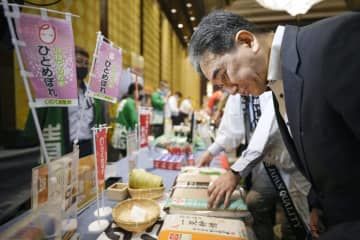 An event promoting food products made by Japanese companies was held in Beijing on Thursday ahead of the 50th anniversary of the normalization of diplomatic ties between the two countries next week. The event sponsored by the Japan External Trade Organization at a Beijing hotel mainly targeted wholesalers and supermarket and Japanese restaurant workers in charge of procurement. It featured such products as rice, confectioneries, liquor, sashimi raw fish, ramen noodles, red bean paste and deep-fried pork cutlets. A large crowd formed when a tuna cutting demonstration was staged. A JETRO officia...
Click for full story