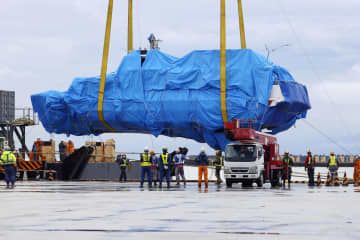 A body discovered a week ago on the beach near Japan's scenic Shiretoko Peninsula was confirmed to be that of the captain of a tourist boat that sank nearby in April, leaving more than 10 people dead, the coast guard said Saturday. The 19-ton Kazu I, carrying 24 passengers and two crew members, made a distress call and disappeared on April 23 after leaving Utoro port in Shari for sightseeing along the peninsula of the northernmost main island of Hokkaido, despite a forecast for rough weather. With the confirmed death of the 54-year-old captain, Noriyuki Toyoda, a total of 19 victims have been ...
Click for full story