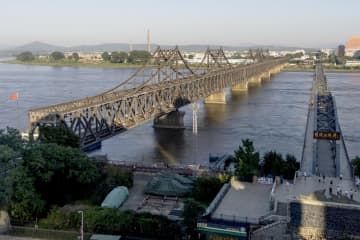 A freight train service between China and North Korea resumed Monday after it was suspended in late April amid a coronavirus outbreak in the Chinese border city of Dandong, South Korea's Yonhap News Agency said. The train with more than 10 cars from Dandong was spotted crossing a bridge to the North's border city of Sinuiju at 7:43 a.m., Yonhap said. China is the country' closest and most influential ally in economic terms and the move signals the expansion of bilateral trade. The cargo train operations had been suspended since April 29, with many residential compounds in Dandong locked down a...
Click for full story