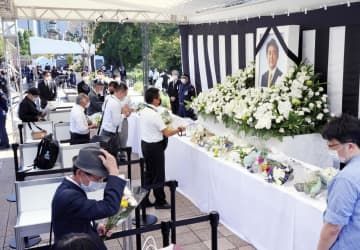 A state funeral for former Prime Minister Shinzo Abe is set to be held in Tokyo later Tuesday, with more than 4,000 mourners in attendance, despite mounting opposition to the controversial ceremony for the country's longest-serving leader. Ahead of the state-funded event, costing more than 1.6 billion yen ($11.2 million) in taxpayer money, calls have grown to cancel the ceremony as the legal basis is lacking to hold such a funeral, as well as due to Abe's complicated political legacy. In the service at the Nippon Budokan hall starting at 2 p.m., Prime Minister Fumio Kishida and his predecessor...
Click for full story