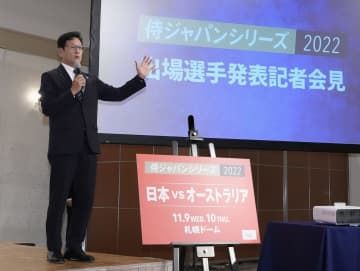 Munetaka Murakami, the youngest player to win a Japanese batting Triple Crown, and Roki Sasaki, Japan's youngest perfect game pitcher, were named Tuesday to Samurai Japan's roster for its November games against Australia. The 22-year-old Murakami and Sasaki, who will turn 21 six days before the two-game series at Sapporo Dome opens on Nov. 9, headline a young team in the buildup to next March's World Baseball Classic. "I'm pleased with this opportunity to be able to play alongside those of national-team caliber," Sasaki said. "I expect this time to be precious, so I want to absorb different th...
Click for full story