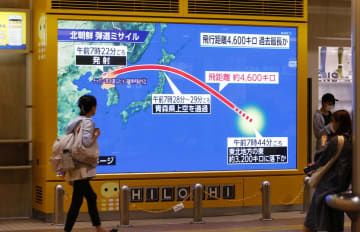 North Korean state-run media made no mention on Wednesday morning of the previous day's firing of a ballistic missile over the Japanese archipelago, following similar instances of silence on a string of missile launches earlier this year. North Korea on Tuesday fired a ballistic missile over the Japanese archipelago for the first time in five years, with the projectile reaching the longest distance ever for a missile launched by Pyongyang, the Japanese government said. North Korea's media used to report on weapons tests the day after they are conducted, but no mentions of missile launches have...
Click for full story