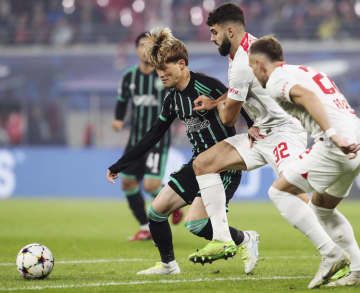 Japan forward Kyogo Furuhashi set up the equalizer but Celtic remained without a win in the Champions League Group F after losing 3-1 away to Leipzig on Wednesday. In a quick counter, Japan teammate Reo Hatate sent a first-time pass to Furuhashi from the middle of the pitch before the forward unselfishly laid the ball off to Jota to slot home two minutes after the break at RB Arena. But a horrific pass from keeper Joe Hart led to Andre Silva scoring in the 64th-minute, with the Portuguese adding a second 13 minutes later following a fine delivery from the right by Mohamed Simakan. Christopher ...
Click for full story