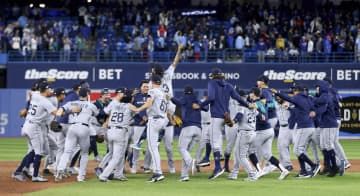 Toronto Blue Jays left-hander Yusei Kikuchi's 2022 campaign ended without a postseason mound appearance Saturday as his team was eliminated by the Seattle Mariners in the American League Wild Card Series. Kikuchi watched the end of the game from the bullpen at Rogers Centre in Toronto after his former team overcame a seven-run deficit to beat the Blue Jays 10-9 in Game 2 of the best-of-three series. In his fourth year in the major leagues and his first with the Blue Jays, the 31-year-old from Japan was moved to the bullpen in August after struggling to a 4-7 record with a 5.25 ERA in 20 starts...
Click for full story