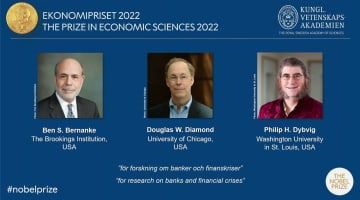 Former U.S. Federal Reserve Chairman Ben Bernanke and two other U.S.-based economists won this year's Nobel Prize in economics on Monday for their research on the role of banks during financial crises, the Royal Swedish Academy of Sciences said. Bernanke, a distinguished senior fellow at the Brookings Institution, showed how bank runs were a decisive factor in creating the Great Depression of the 1930s, the worst economic crisis in modern history, according to the academy. During his time as Fed chairman from 2006 to 2014, Bernanke, 68, responded to the 2008 meltdown triggered by the collapse ...
Click for full story