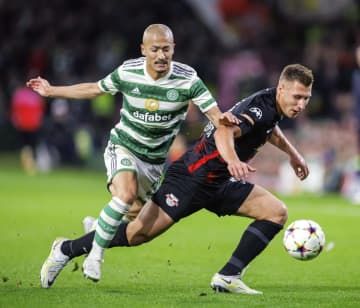 Celtic, home to Japan internationals Kyogo Furuhashi, Reo Hatate and Daizen Maeda, crashed out in the group stage of the European Champions League after losing 2-0 at home to Leipzig on Tuesday. Timo Werner opened the scoring for Leipzig at Celtic Park in the 75th minute and Emil Forsberg doubled the lead nine minutes later. Japan striker Maeda missed a chance to score with a header soon after the match began. "I had to score that one," Maeda said. "It's a shame that we lost after we played well in the first half." Celtic now have three losses and a draw with two matches left to play, leaving ...
Click for full story