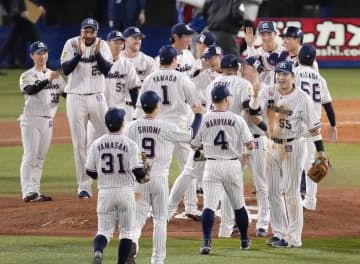 The Yakult Swallows completed a sweep of the Hanshin Tigers with a 6-3 victory in Game 3 of the Central League Climax Series' final stage Friday, earning a second consecutive trip to the Japan Series. The Swallows won the final stage four games to none at Jingu Stadium after entering the series with a one-win advantage as the pennant winner. Hanshin reliever Masumi Hamachi made an errant glove toss to first base as he tried to field a slow roller hit by Triple Crown winner Munetaka Murakami with the bases loaded and two outs in the seventh inning, allowing all three baserunners to score at Jin...
Click for full story