Baseball: Padres' Darvish to start Game 5 of NLCS vs. Phillies 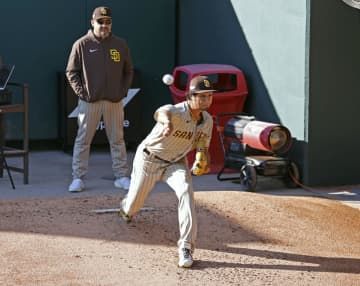 San Diego Padres pitcher Yu Darvish is scheduled to start Game 5 of the National League Championship Series, manager Bob Melvin said Friday. Darvish will pitch in Sunday's Game 5 in Philadelphia on four days' rest after he threw seven innings of two-run ball in a 2-0 loss to the Phillies in the series opener. The veteran right-hander threw 36 pitches in a bullpen session with batters standing in the box prior to Friday's Game 3, which the Phillies won 4-2 to take a 2-1 series lead. It will be Darvish's fourth start of this postseason. He won his first two, against the New York Mets and the Los...
Click for full story