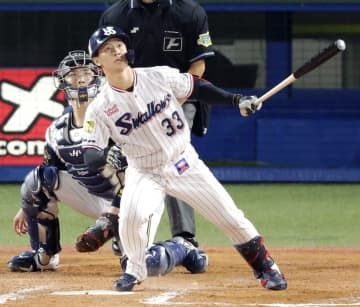 Rookie catcher Soma Uchiyama hit a three-run ninth-inning pinch-hit home run as the Yakult Swallows salvaged a 3-3 Japan Series Game 2 tie with the Orix Buffaloes on Sunday. The Central League champs, 5-3 winners in Saturday's Game 1, held on to their 1-0 series lead when the game at their home park, Jingu Stadium, was called a tie after 12 innings. The Pacific League champion Buffaloes came within a hair of scoring the go-ahead run in the 12th, but pinch-runner Kodai Sano was prevented by the umpires from scoring from second base after a wild pitch rolled out of play. Uchiyama's homer in his ...
Click for full story