At least 132 killed after bridge collapses in India 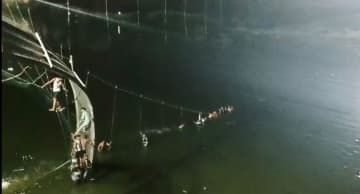 At least 132 people have died in India after a cable suspension bridge in the western state of Gujarat collapsed Sunday, sending scores of people on the bridge plunging to their deaths, local media said Monday. The more than a century-old bridge in Morbi likely broke due to excessive weight caused by so many people gathering on it at once, according to media reports. The popular tourist spot had been reopened Wednesday after renovation. Many of the deaths were believed to be elderly people, women and children. The accident occurred at around 6:40 p.m. The death toll rose as rescue workers retr...
Click for full story