Soccer: Stuttgart's Endo stretchered off after clash of heads 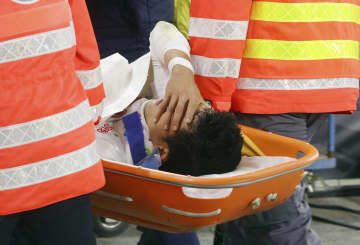 Japan midfielder Wataru Endo was stretchered off following a clash of heads during Stuttgart's 2-1 home win over Hertha Berlin on Tuesday in the German Bundesliga. The potential layoff for Japan's regular starter would be a huge blow to manager Hajime Moriyasu with their World Cup Group E opener against Germany just two weeks away on Nov. 23 in Qatar. Starting in defensive midfield, Endo was having a solid outing at Mercedes-Benz Arena until he was floored after going up for a ball with Ivan Sunjic in the 77th minute. Endo received treatment before he was substituted five minutes later. Local ...
Click for full story