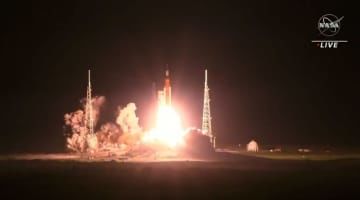 NASA's megarocket blasted off Wednesday to send an uncrewed spacecraft around the Moon and back to Earth, as the U.S. space agency aims for future flights with astronauts under the Artemis lunar exploration project. The Orion spacecraft and mini devices, including a Japanese lunar lander, were launched from Kennedy Space Center in Florida atop the 98-meter Space Launch System rocket, which is the most powerful rocket in the world, according to NASA. Orion will be taken 450,000 kilometers away from Earth, flying farther than any spacecraft built for humans has ever flown. The latest development...
Click for full story